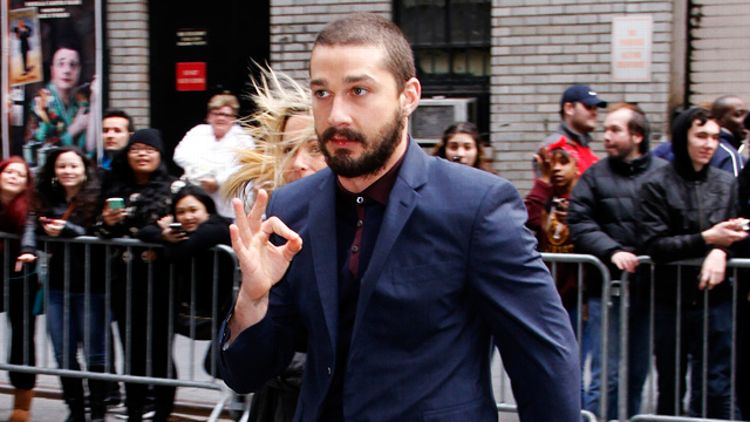 Last year/two and a half weeks ago, Shia LaBeouf ripped off a comic by Daniel Clowes for his short film HowardCantour.com. Remember that? Of course not; the whole point of New Year’s is to reboot your brain and empty it of these items to make space for more. I’m sorry to clutter your hard drive, but you’re going to need a refresher. When Clowes — and everyone else — noticed that the plot and dialogue had been lifted without credit, LaBeouf apologized on Twitter (with a little help from Yahoo Answers). Then he apologized again. And again. And again.

He said he was sorry 28 times as the year drew to a close. While he was busy typing, sleuths were finding more evidence of lifted material, this time in LaBeouf’s comics, which contained slightly altered passages from Charles Bukowski and Benoît Duteurtre. LaBeouf asked to be taken seriously (“This is not a publicity stunt”), but was obviously not being completely serious, especially when he borrowed from Mark Zuckerberg, Tiger Woods, Kanye West, and Robert McNamara. As publicity stunts go, it grew stale quickly. We were eager to refresh the page on a new year, and these tweets lacked zing. It was also easy for everyone to zone out on LaBeouf as we all unlatched ourselves from our screens to go enjoy a nice walk outside. Away from the bullshit, enveloped in the temperate New Year’s Day breezes of Los Angeles, a person could take a deep breath and look to the sky to see — wait, what’s that?

At first, God, it looked like “Daniel,” or just the clouds in your eyes. But then the rest of the message appeared: “I am sorry Daniel Clowes.” Nooo! NOOOO! This was supposed to be a new era, light on the Shia! The grand gesture was facilitated by the Skywriters of Worldwide Sky Ads and could be seen from many L.A. vantage points from Hollywood to the Valley, which wouldn’t matter to Clowes (who is reportedly “pursuing his legal options”) because he lives in the Bay area. LaBeouf’s persistent messages are, it’s now probably safe to assume, not intended for Clowes at all, but for us. He’s trollin’.

While it might not be a good idea to continue to pay attention to all of this, it’s kind of hard when a person trolls on the sky. We were all just minding our own business, looking upward and hatching conspiracy theories about chemtrails. The question is: What’s the point? The damage LaBeouf inflicted on Clowes is real (Clowes described the source material, a 2007 comic titled Justin M. Damiano, as “a very personal story”), and using the theft as a springboard for mass attention-grabbing is bizarrely insensitive. The cast and crew of HowardCantour.com were probably dismayed to learn that they were working on a plagiarized project (as LaBeouf acknowledged in a predictably recycled way), but they didn’t receive personalized letters written in clouds. If any of them believe in chemtrails, they might even be wondering if HowardCantour.com was just a short film conceived to set the stage for Twitter performance art, like 2001 was to the Apollo moon landing.

That’s not likely, though it’s a more fun conclusion than whatever we’re left with. Along with Clowes, Melville House Books is considering taking legal action against LaBeouf for plagiarism; the amusement-to-damages ratio is puzzlingly out of whack, and nearly all of the attention gained by LaBeouf is not the sort anyone in his or her right mind would seek out voluntarily (legal battles are expensive, as are skypologies). The only alternative explanation, Room 237 theories aside, is that LaBeouf is in social-media death-drive mode. In that case, let’s return to trying to look away — down (until the characters start materializing on the concrete), at a wall (until holographic messages appear there too), or just at the insides of your own eyelids, where Shia can’t find you — and into the future. Archive this in your 2013 folder and forget it.

The Hobbit Was 2013's Most Pirated Movie