Katy Perry and Lady Gaga: The Battle for the Pop Silver Medal Rages On 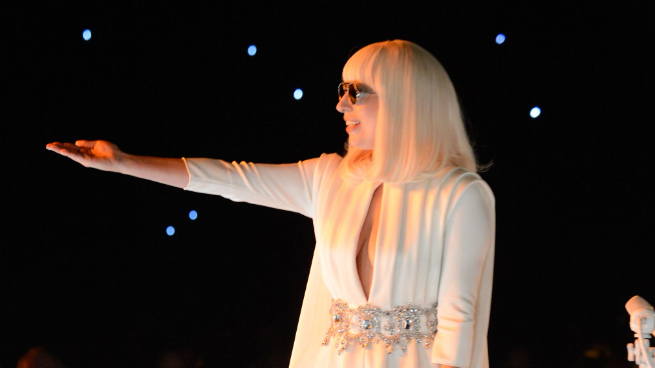 Last year’s pop wars may have ended with Yoncé stomping her serfboart on the competition like a Monty Python cartoon foot, but the offshoot battles are still raging. Current underdog Lady Gaga, last seen replacing R. Kelly with Christina Aguilera on her would-be smash “Do What U Want” after the Village Voice refreshed our memory of Kelly’s long checkered history as a sexual predator, and refusing to release its accompanying video, shot by alleged sexual predator Terry Richardson, is hard at work at her next video.

Gaga is attempting to reboot her Artpop promo cycle with a new video for a mystery single that is rumored to be either “G.U.Y.” or “Venus.” Both songs are fan favorites, but it’s worth noting that neither are “Gypsy,” which Interscope announced as Gaga’s next official single on January 21. A board member from the Hearst Castle Preservation Foundation leaked the news that Gaga was going to be filming at the historic San Simeon locale, a national symbol of ostentatious wealth. To film there, Gaga is paying the castle’s “standard $22,100 special event fee” as well as the lavish production costs to realize her vision. The video is apparently being directed by Jonas Åkerlund, who helmed Gaga’s similarly mansion-set “Paparazzi” video. Maybe it’s an effort to recapture the excitement of that era of Gaga, when everyone was hyper-interested in what she’d do next, and weren’t bored yet of her tendency to make long-form videos with campy dialogue.

Maybe Gaga is jealous that Åkerlund reused the Villa Leon, the gorgeous Malibu seaside mansion in her “Paparazzi” video, for the exterior of a hallucinatory sex hotel in Beyoncé’s “Haunted.” There’s only one way to up the stakes: by renting an even more flamboyantly expensive house to shoot her next video in. If she’s going to go down, she’ll go down in pink flames. Call it Citizen Gaga. Meanwhile, Katy Perry has easily shaken off the relative disappointment that was second Prism single “Unconditionally” in favor of the Juicy J–guesting “Dark Horse,” which has proven to have legs on radio. She performed it at the Grammys as a production number that felt like a very kitschy version of The Crucible. The song “Dark Horse” seems to call for a witchy, Stevie Nicks–y, black magic kind of video.

But fuck that noise, Katy decided she’ll make it ancient Egyptian themed! Given the way her geisha-themed production number went over at the AMAs (not well), you would think Katy might veer away from adopting the garb of another culture, even an ancient one. But as far as Perry sees it, she is just expressing her love and appreciation for foreign lands. She defended the “Unconditionally” performance in her recent cover profile for GQ by saying she was inspired because she thought “Geishas are basically, like, the masters of loving unconditionally.” Uh, I don’t think Katy quite understands what geishas do. Her version of ancient Egypt is apparently hot pink. Will Katy blow her big lead with the “Dark Horse” video? Does Gaga have a shot in the dark? We’ll just have to stay tuned, as if we have any other choice.