Silver Lakes Run Deep: The L.A. Women of ‘Afternoon Delight’ and ‘In a World…’ 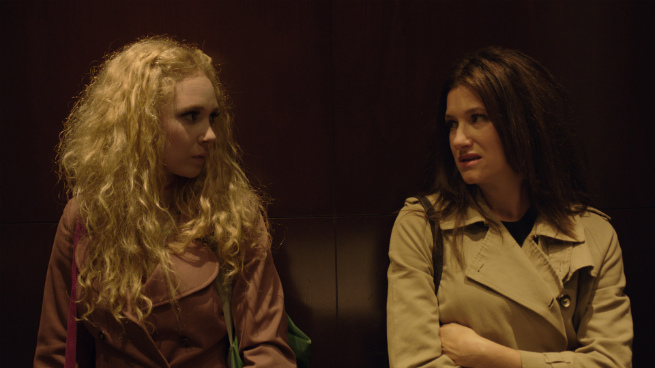 The stylish Los Angeles neighborhood of Silver Lake has a reputation as a West Coast counterpart to the more bourgie parts of Brooklyn. Silver Lake is a similar mix of guys with beards, girls without bras, and parents with expensive strollers. There are “third wave” coffee shops with uncomfortable chairs and minimalist menus. There are boutiques that sell outrageously priced handmade jewelry, denim hemmed into shapeless garments and peddled for hundreds of dollars, tiny cacti terraria and marked-up bundles of white sage. There are fancy locally sourced bistros, kitschy diners, and multiple vegan restaurants, bookended by taco trucks and pho joints. There is an abundance of bright colors and midcentury modern design. Silver Lake is home to a number of homes that pioneered the now classic architectural style, and you can recognize them by their wooden beams and big glass windows, typified by the “Neutra colony” of eight houses designed by architect Richard Neutra and built after World War II that run along Silver Lake Boulevard, across from the Silver Lake reservoir. While midcentury modern houses were once the residences of movie villains, they are now the onscreen and real-life homes of cozy upper-middle-class families, whose philosophy of design and lifestyle can best be described, somehow, as Silver Lake–y. Think of Beck, Zooey Deschanel, or Spike Jonze. You don’t have to live in Silver Lake to be Silver Lake. It’s sort of an aesthetic state of mind, for adults who don’t just love Wes Anderson movies, but want to live inside them. They covet a similar mixture of stylish snobbery and childishly twee design, splitting the difference between Paris and Sesame Street.

Jill Soloway’s directorial debut, Afternoon Delight, winner of the Directing Award at the 2013 Sundance Film Festival, takes place in this very specific Los Angeles milieu, skewering its pretensions while acknowledging that it remains a fantasy for the young and upwardly mobile, particularly during a recession when former items on the American Dream checklist, like owning a home or having kids, are no longer a reasonable economic choice for many. These midcentury modern houses are the western equivalent of New York brownstones — aspirational domiciles for those with the lust to nest. Afternoon Delight is about a woman who finds that getting everything she wanted — the hot husband, the gorgeous house, the beautiful well-behaved kid — has actually made her miserable. Rachel, played by Kathryn Hahn, is a three-dimensional portrait of a woman in the throes of a life crisis that happens to be very funny, albeit in the darkest possible way. Rachel’s problems start with her sex life, where she and her sweet husband, Jeff (Josh Radnor), are stalling. The couple hasn’t had sex in months, because she is passively resentful that he wants to do it only at bedtime. Her therapist (Jane Lynch) asks when she would prefer to have sex, and she describes a spontaneous midday romp in vivid detail. From there on out, Rachel embarks on a journey of thirtysomething erotic discovery that begins in a strip club and seems destined to end in tears (and possibly divorce). Rachel is not a stereotypically repressed stay-at-home mom. She’s funny, sexy, and speaks crudely. Her boredom with life is amplified by her station in a klatch of other Jewish moms at an Eastside preschool, who are as uptight as any Stepford wives when giving orders about auctions and craft days. Rachel, who is comparatively earthy and the most liberal of the group about sex, decides to rebel.

After getting a lap dance from her during a wild-for-the-night strip-club double date, Rachel invites stripper McKenna (Juno Temple) to move into her family’s spare room. Rachel’s cover that McKenna is their new nanny quickly becomes the ad hoc reality. Her nosy friends are curious why the family’s new nanny is a coy 22-year-old Lolita in pink sweatpants, but the husbands are nosy about her for different reasons. Nobody quite understands why Rachel is so obsessed with McKenna, particularly Rachel’s husband, who tries to be understanding about his wife’s new project despite having misgivings from the start. When it comes out that McKenna is not only a stripper, but also a self-employed sex worker, Rachel gets swept up in her own Belle de Jour fantasy, which may or may not turn out to be a nightmare. It makes you laugh, and sometimes it makes you want to barf, because it’s a gross-out comedy about the baseness of human impulses. No matter how many life trophies you accumulate, you can’t escape the death drive. Afternoon Delight is a sex comedy for adults. It made me feel every emotion on Plutchik’s wheel, sometimes in extremely quick succession. Hahn, a Yale-trained actress whose biggest breakout role to date was Adam Scott’s horny wife in Step Brothers, is revelatory and gives a performance that simultaneously recalls both Jack Nicholson and Karen Black in Five Easy Pieces. Soloway, who directed her own script, wrote for Six Feet Under and was the executive producer/showrunner of Diablo Cody’s United States of Tara. Soloway has given Hahn a five-course meal of a role, and Hahn devours every bite. She’s remarkable throughout, but a drunk scene toward the end where she confesses to the other PTA moms that she masturbates to the rape scene from The Accused is her biggest tour de force.

Despite the potential for hooker-meets-yuppies broadness, it’s all played very naturally, especially by Hahn and Temple. As McKenna, Temple plays her character’s cunning on multiple levels as the lines of her relationship with Rachel start to blur. Does McKenna see Rachel as a mother figure? A friend? A patron? Or just another john? Everyone is pretending it’s not weird, and the harder they pretend, the weirder it gets. Hahn and Radnor capture the specific chemistry of a couple who can still generate some rogue sparks despite running on fumes. Jeff is never painted as the bad guy, and neither is Rachel, although she ostensibly is. Here she is a flawed, fully realized human being, the kind of character I am always begging to see more of in film. She indulges in a narcissistic fantasy of sexual deviancy that jeopardizes her boring but stable marriage, but her fantasy life quickly meets the brick wall of reality. Once she gets caught up in the excitement of going too fast, it gets harder and harder to brake. Her private sex dreams are written in a language that doesn’t translate IRL, and her infidelity is a reaction to overabundance and boredom with her own privilege. It’s the Silver Lake version of Anna Karenina. In a World … — written, directed by, and starring Lake Bell — is another movie that takes place in Silver Lake, though its milieu is far removed from the world of Afternoon Delight. Bell is an actress best known for How to Make It in America, Childrens Hospital, and It’s Complicated. She got her big break on David E. Kelley’s The Practice, where she excelled as one of Kelley’s whip-smart professional women, making it to spinoff Boston Legal. She was a standout in Liz Meriwether’s delightful pre–New Girl romantic comedy No Strings Attached, and the lone highlight of drek like What Happens in Vegas and Miss Match. Bell produced In a World … as a vehicle for herself, creating the kind of interesting multifaceted lead role for an offbeat woman that mainstream Hollywood would never even think to write. That’s a big thing both of these movies have in common and why it is so gratifying to find out they exist.

The movie takes place in the voice-over world, one of Hollywood’s many less glamorous side channels. It begins with archival footage of the late Don LaFontaine, the legendary voice actor who pioneered the now-cliché “In a world …” intro that big-budget trailers still use. In the world of World, the death of the Don has launched a Game of Tones to see who will be the next name voice in the vocal acting world. Bell’s Carol is the daughter of one aspirant, her horndog father, Sam (Woody Allen regular Fred Melamed). Sam doesn’t take his daughter’s vocal acting career seriously, preferring to groom a competitor named Gustav, played by Ken Marino, who is on fucking fire lately. Gustav is slightly reminiscent of Marino’s douchenozzle Eastbound & Down character, Guy Young, another of Marino’s masterful sleazy lotharios. Gustav exudes such believable charismatic authority of voice that Carol starts falling for him, before finding out they’re in competition for a major voice role. The film depicts another Silver Lake yuppie marriage in crisis, this time between Carol’s sister Dani (Michaela Watkins, who is also in Afternoon Delight) and her husband, Moe (Rob Corddry). There’s another gorgeous house and seemingly perfect life that turns out to be a bit of an existential sham. Carol is torn between the handsome but smarmy Gustav and nice guy Louis (Demetri Martin). There’s never very much tension about whom she’ll end up with, but this movie is less about high dramatic stakes and more about exploring ideas. Among the issues Bell explores: sexism in the entertainment industry, sexual boredom in long relationships, the phenomenon of “sexy baby voice.” It’s also a romantic comedy and a PSA for sisterly activism in the film world. Cameron Diaz, Bell’s Vegas costar, cameos as the star of a fictional Hunger Games–style franchise about Amazons. Even this fake idea seemed good to me. Cameron Diaz as Mad Max? Sign me up!

The romantic aspects of both In a World … and Afternoon Delight are so refreshing because they are about female desire, free of any of the tropes that make most rom-coms so alien to actual female human beings. They are about women who are messy and imperfect, and not in the way where they trip down the stairs in heels. If these women trip, it is because they are red-wine-and-beer wasted. In a World … is messy and imperfect, but incredibly charming. Not all of its jokes work, and some of the scenes drag, but it’s a really interesting, strange movie. (“Strange” is a compliment.) Both of these movies feel like they were made by actual people, and it’s especially nice that those people are women with strong points of view. Delight’s personal is the political, but in World, the politics of the industry are up for critique. World has a message, and it’s not afraid to be up-front about it. The dominance of male voices in the voice-over industry is a microcosm of the way male voices are dominant everywhere else. Soloway’s and Bell’s films are a reminder that you might have to make your movie yourself, but if you make it, the audience is already there. They’re at home, in their Silver Lake bungalows, looking for something good to watch on Netflix.

'The Michael J. Fox Show' Is Off the Thursday Schedule. So What Now?