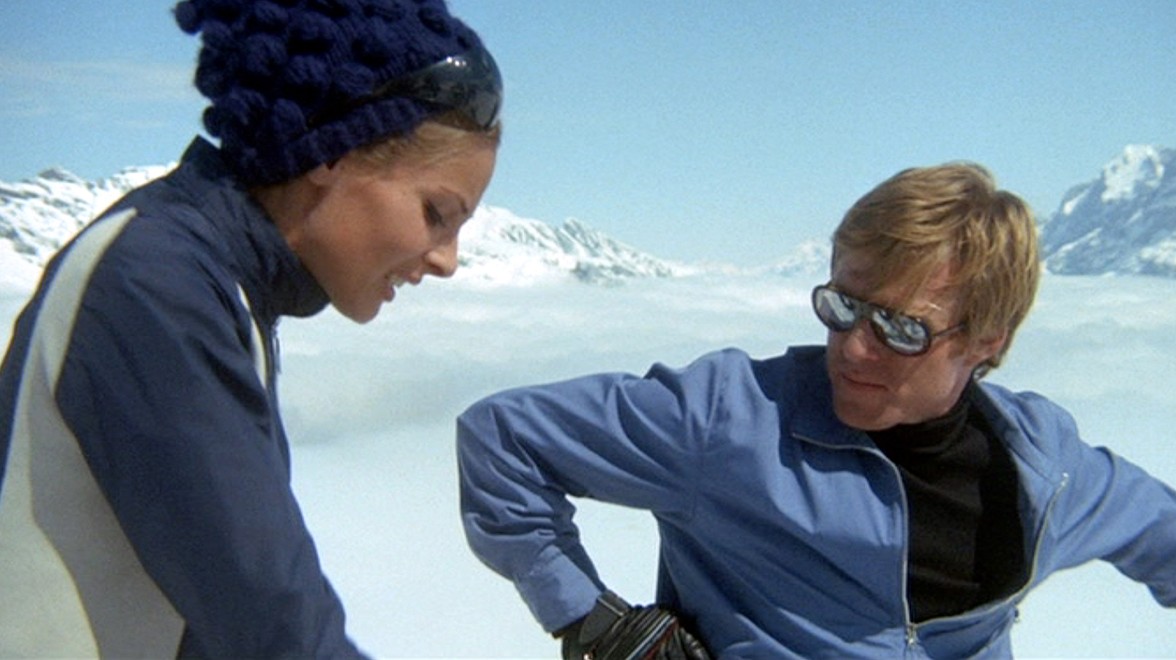 Forty-five years ago, Joe Jay Jalbert was slicing through the ruts and down the mountains of Kitzbühel, Austria, with a 15-pound 35-millimeter camera strapped to his shoulder and a pair of Head alpine skis riveted to his feet. From his vantage point, all that could be seen were slalom markers growing closer in our sight line and then disappearing like apparitions, the little red tips of those skis poking out as they cleave the hardened snow. It is a terrifying, electrifying point of view — the fastest, truest representation of racing down a mountain I’ve seen in a Hollywood film. Jalbert, then a 19-year-old former member of the U.S. national ski team, had never held a camera before, never acted, and knew next to nothing about the film industry. But he had the skiing expertise, a stuntman’s fearlessness, and the youthful foolishness to be the crash test dummy on the set of the one truly great movie set against the Winter Olympics. That movie is Downhill Racer, the 1969 drama written by the novelist James Salter, directed by Michael Ritchie, and starring Robert Redford. It should be a hallmark of sports cinema. Come Olympic time, it is again mostly forgotten. 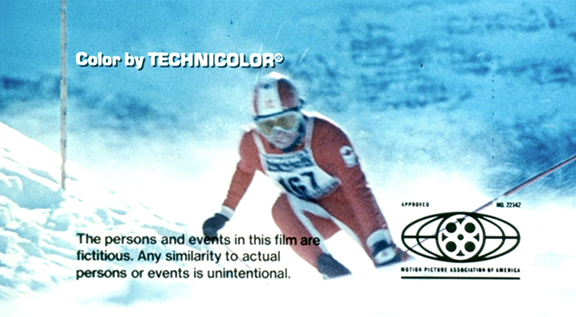 Downhill Racer was the first of many self-mythologizing films about gifted and taciturn men that Redford made in his career. It was also the very first he shepherded through the development stage, through flaky directors (Roman Polanski was in, then out), with a cantankerously artful writer (Salter is a poet and a crank), and ultimately to the funding stage, where he cajoled $1 million out of Charles Bluhdorn, the blunt, crude head of Gulf and Western, by teasing him with 15 minutes of ski crash footage. Jalbert suffered his fair shares of crashes for Redford and Ritchie — that’s him in the movie wiping out, skis flipping over his head and snapping off, being carted off to a helicopter in the film’s earliest sequence. (“Are they still filming?” he groggily asked after taking out three onlookers in the crowd.) But that’s not what Downhill Racer is; it’s no crash-and-smash ski-bunny soap. It’s a psychodrama about a cold, monomaniacally driven pretty boy named David Chappellet on a collision course with an Olympic gold medal at the ’68 Games in Grenoble. Redford’s Chappellet anticipated Michael Jordan and Tiger Woods and every other ruthlessly ambitious winner in American sports — that’s what the actor set out to create. A portrait in cold blood. Downhill Racer was meant to be the first in Redford’s Winning Trilogy — Part 2, the dead-eyed 1972 political satire The Candidate (also directed by Ritchie), was as far as they’d get, leaving the trio unfinished. Chappellet is unfeeling for his competitors, unkind to his teammates, and destructively selfish on the slopes. His coach is an obstacle. The mountain is a myth. He goes for the proverbial it all the time, and whines when he doesn’t get his way. He’s a wonderful asshole, a chiseled model for the self-consumed champions that came after him.

It’s no mistake that Redford centered this story on a journey to the Winter Games — the Olympics feature more individual competitions and more tests of lifelong dedication than any other sporting event in any other context. It is hugely expensive to commit to an Olympian’s path, particularly at the Winter Games. It is also, frankly, a lot colder and less desirable than the Summer Games. But it is the richest of settings — when broadcast coverage from Sochi begins this Friday, Bob Costas will not hesitate to uncork phrases like “the best in the world,” “the world’s grandest stage,” and “the whole world is watching.” Because that is the truth. Russia will be covered in white and glitter, the uniforms shimmering as the participants slash and contort and fly through the sky. There is no more cinematic occasion. So why is Downhill Racer the only great Winter Olympics movie ever made?

Put down your torches, Cool Runnings fans. Lower those skate blades, The Cutting Edge allegiants. Calm down, Miracle monsters. These are fine movies. High-quality family entertainments. But that’s all they aspire to and all they can be. Downhill Racer is self-serious stuff and pretentious for it, but it suits its setting. It homes in on the control, the loss of power, the isolating oddity of an athlete’s life. It asks questions about the nature of winning, but never the cost. It’s difficult to know why more serious filmmakers haven’t used this backdrop to ask these questions. Baseball and football and basketball are still used by filmmakers to interpret the metaphysical tortures of sport and the lives that surround that torture. Those sports also host no shortage of comedies, docudramas, and kids’ movies. The Winter Olympics is a virtual ghost in the eyes of Hollywood. Despite the big questions, the high stakes, and the inherent beauty of the events, there is little to show for it. In a recent Business Insider video montage about the best Olympics films ever made, long-distance running comprised three of the top eight, and two of those were Steve Prefontaine biopics. This is a sad state of affairs. Skiing (and snowboarding) are perhaps the most majestic framing device in the world of sport. But the canon of skiing movies has been marked by goofy ’80s time capsules like Ski School, Hot Dog … The Movie, and Aspen Extreme, each looking to cash in on the bourgeois glamour of the lodge and the frolicking extracurricular lives of ski bunnies and bros. “Grab your poles and kiss your buns good-bye!” the advertisements begged us. (The unimpeachable Better Off Dead also technically belongs to this category.)

But there’s more to mine, more that’s true to life from the Games. The skiing epic has mostly been relegated to Warren Miller Entertainment, the production house started by Miller, a documentary filmmaker who used dramatic pop and astonishing photography of skiing (and later snowboarding) for his traveling road show of ski movies. He made 55 in 55 years. Since Miller sold the company in 2004, WME continues to churn out Dave Matthews Band–soundtracked ski epics. But these movies lack narrative cohesion or artistic insight — Miller’s movies are the NFL Films of the ski world: gorgeous, illustrative, a little snarky, but ultimately too controlled by the source.

There were two skiers who influenced Redford and Salter in the shaping of David Chappellet: the West Coast haircut named Spider Sabich and the driven, self-sustaining Vermont-born Billy Kidd. Salter took to the quiet Kidd, an eventual gold medal winner. Redford, also a California kid, fell for Sabich’s slick playboy image. Eventually, Redford and Salter merged the two for Chappellet. But if directors and screenwriters are looking for a profound story at the Winter Olympics, Sabich’s is as ripe as any in history. Like James Hunt, the jet-setting subject of last year’s Rush, Sabich was a handsome, accomplished, world-class athlete. Never a medal winner, but a devilishly good and appealing professional World Cup racer, he appeared on the cover of GQ, went pole to pole with the dominant Jean-Claude Killy, and romanced beautiful women at his Aspen crash pad. All the vainglorious jerks who populate those ’80s skiing movies are simulacra of Sabich, only he wasn’t a jerk. He was just good. He invented an American archetype. Which makes his story that much more tragic. 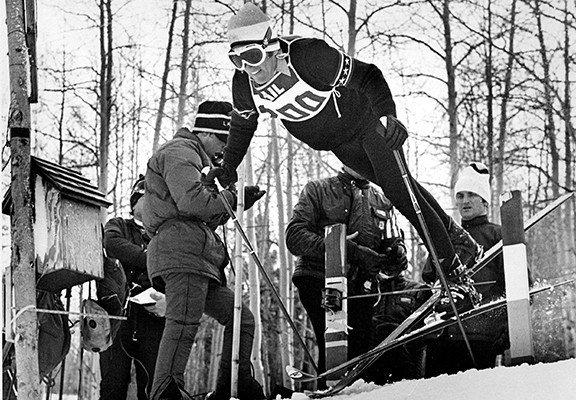 In 1976, Sabich was killed by his girlfriend, the singer-actress Claudine Longet. She claimed a .22 pistol accidentally discharged as Sabich was attempting to show her something about the firearm. He was shot in the stomach and bled out before an ambulance arrived. The French-born Longet was charged with murder, but after evidence (including a cocaine-laced blood test and an inflammatory diary) was improperly collected from the crime scene and the gun proved difficult to fire upon examination, the trial hit a snag. Longet was found innocent of murder, convicted only of misdemeanor criminal negligence, and out of prison in 30 days. Longet later took up with (and eventually wed) her then-married defense attorney, Ron Austin, generating further scandal. Three days after the incident, Saturday Night Live’s savage genius Michael O’Donoghue crafted this hilarious, insensitive, extremely dark sketch, “The Claudine Longet Invitational.” (SNL later apologized.) Sabich’s family settled a civil suit with Longet out of court for an undisclosed sum. Longet, the onetime wife of beloved singer Andy Williams and one of the few successful French pop stars in American history, was essentially exiled to her massive home in Aspen. Surrounded by skiing, haunted by the death of one of its greatest figures. She remains there to this day.

Who wouldn’t watch that movie?

Silver Lakes Run Deep: The L.A. Women of 'Afternoon Delight' and 'In a World...'