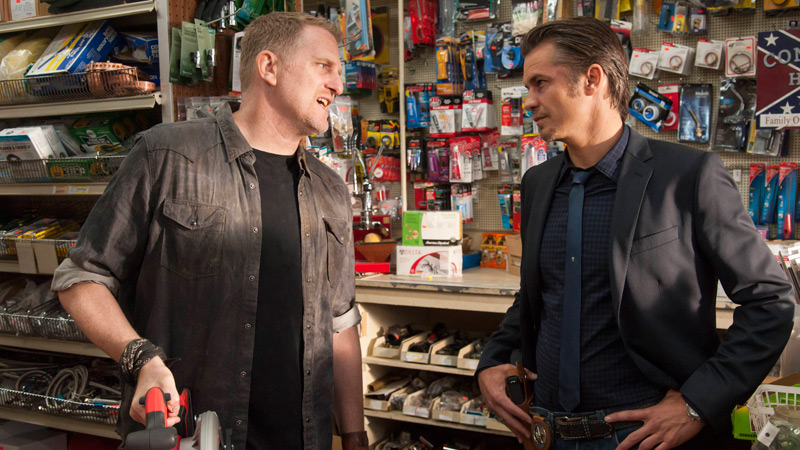 Previously, on Justified: Everybody’s so busy, mostly killing off a good-sized chunk of the cast. The lords of Crowe and Crowder were introduced; Boyd and Carl found a home for their corpse emporium; Boyd killed Lee Paxton and arranged for the murder of Sheriff Mooney; Ava was framed for assault and sent off to scarier prison; Wendy turned up in Kentucky to look after Kendal; Danny killed the Haitian; Daryl’s bloody struggle against the vowel patterns of the southeastern United States raged on; and Art was having a pretttty good day until Raylan went and (we’re to assume) confessed to that pesky Nicky Augustine thing.

The climax action of “Shot All to Hell” takes place offscreen, but you can hazard a guess that’s probably close to right: Raylan laying out the facts of Augustine’s murder on the tarmac, and Art staring at him for a long, frozen moment of disappointment before gathering his things and shambling out without another word or even eye contact. And if we’re being honest with ourselves, we’re kind of OK with that; Art bears such a strong resemblance to our dad that any time he’s mad we get a knot of anxiety in our chest like we’re waiting for him to pick us up at the police station.

We catch up with Art in some blue-hazed bar somewhere, rubbing his temples as Raylan pulls up in the pouring rain.

Art looks away for a second, considering in that way people on screens always like to do before they take a swing at somebody, then slings his arm in the general direction of his deputy’s eye socket. Art staggers back, looking his age for just a second, then leaves, not looking back, shaking the hurt out of his hand. Raylan, looking blank even for Raylan, picks up his hat.

Allison’s walking up the steps of a well-to-do-looking house, which apparently now contains the Crowe clan, early for her scheduled home visit with Kendal. When she leaves, Danny and Chelsea are frolicking aggressively with a rope toy out front, and we’ll pause here to collect all the skin that crawled off us in revulsion rewatching this next scene: Danny following Allison to her car, leering and barking. He’s not done following: A few minutes later, as she lights a cigarette, Allison’s rear-ended on a dark road, her car sent off the road by Danny’s truck. We know this because Danny takes the trouble of getting out to bark at her some more. Danny might actually have rabies.

Marshals in the conference room. The Tonin case is proceeding slowly. Tim is taking a bin Laden joke that falls flat personally in an effort to dispel the frost waves emanating from Art in the general direction of our intrepid hero. Raylan won’t discuss his black eye. Art blames his busted hand on a fall in the shower. Raylan volunteers for inventory duty, with Rachel’s help, and they’re headed into the elevator when they pass Allison, who’s up and mobile but visibly battered from her car’s tumble off the highway.

Rachel: “How come you pushed basement?”

Raylan: “Because that’s where you count bullets.”

Rachel: “Because I’m going with you.”

Raylan: “Fine. You can drive.”

Wendy’s working real hard to maintain plausible deniability in front of Dewey and Danny (more on that in a little bit) when Raylan and Rachel roll up. Their hunt for Danny turns into a hunt for Mike, hardware store proprietor and owner of the house the Crowes have infested, and upon finding him, we learn what “the old thing” Wendy and Daryl were plotting involves: Wendy turning up on Mike’s doorstep with Kendal, claiming they were living in their car and asking for shelter; Mike taking them in and the others glomming on to the arrangement. Raylan asks Mike to evict the family; Mike asks if that includes his hunting cabin. Say, what hunting cabin?

While Ava is marched through the Kentucky State Women’s Prison and strip-searched, Boyd is blinking away tears in his truck before heading into a meeting with Gunnar Swift, a buddy from his skinhead days. Swift is critical of Boyd’s fall from the skinhead wagon, but is detoured by a stack of cash and a plea to have his sister, who’s locked up with Ava, provide her with protection. Ava meets with Lawyer Geist, today without his headphones and without Boyd, and with news that Officer Half-Pint has disappeared and security cameras in the county jail were off the night of her alleged assault. Geist tells her she’ll be moved from her solitary cell into general population, where Gunnar’s sister can keep an eye on her.

In the prison yard, a little posturing action breaks out between groups of black and white inmates. The leader of the latter is the Swift sister, Gretchen, who makes Ava’s acquaintance and promptly throws a punch. Gretchen and her pals, it turns out, are lady white supremacists, of the opinion that Boyd is a “race traitor,” and they’re taking it out on Ava, holding her down and cutting off her hair.

Back in Harlan, Dewey attempts to sell the inflatable pool Raylan shot up before hatching a hare-brained-EVEN-FOR-DEWEY scheme with Danny to kidnap Boyd, get that six-figure paycheck the Crowes have been chasing all season, and get his cousins out of town. They turn up at Johnny’s, find Carl but no Boyd, and settle on taking Carl for ransom. Boyd and Jimmy turn up at the bar and are hunting for Carl when Geist calls, alerting Boyd to the attack on Ava.

About that hunting cabin (stay with us here): Jimmy returns from his recon errand to tell Boyd that Gunnar’s waiting for him at his garage, with pals who presumably share Gretchen’s opinion that he’s too friendly with nonwhite folks. Jimmy makes one more attempt to raise Carl by phone, a phone that’s answered by Dewey, who’s holed up with Danny and Carl at the cabin and can’t get enough cell reception for Boyd and Jimmy to realize he’s not Carl.

This is about when Raylan and Rachel roll up, back on the hunt for Danny, tipped off to the location by Mike. Dewey scuttles off into the brush to hide (Dewey, have you learned NOTH— never mind, Dewey) and we’re treated to Rachel punching Danny in through the front door. Carl, duct-taped to a chair, thinks faster than he managed during the Chrissy story and ad-libs a scenario in which the marshals have interrupted a rough-and-tumble tryst between him and Danny: “What if I’m here of my own volition?” Raylan, on exposition duty: “Meaning, you go loose and get back to Boyd, and the two of you settle up with Danny later?”

Back at Mike’s, the Crowes are all aflutter. Wendy wants to flee back to Miami before Kendal gets taken again. Dewey pipes up: “I went to help, but I got lost in the woods,” which is both a lie and utterly plausible taken as truth. Daryl: “Why’d you have to run that lady off the road?” Danny: “Oh, here we go, you gonna blame it on me?” and YES DANNY, THAT ONE DOES APPEAR TO HAVE BEEN ON YOU — and the sibling squabbling is interrupted by Boyd and his handmaidens. Boyd has a proposition! Interesting things happen whenever Boyd has propositions.

The Crowders, Crowes, and assorted hangers-on descend on Gunnar’s lair. Daryl does most of the beating, somehow, not Danny, although the younger Crowe is extremely distracted by the sight of blood, to the point where it’s surprising he doesn’t get his gun knocked out of his hand. “Now, Carl,” says Boyd, “get my goddamn money,” and if there’s one thing Boyd’s really, really good at, it’s using “goddamn” to majestic effect.

Boyd’s talking to HR, who unbeknownst to him has a gun held to his head by one of Johnny’s men. We’re goin’ to Mexico, y’all! And because HR manages to tip Boyd off with a Dickie Bennett anecdote, Boyd’s going to bring the Crowes with him again. Desperate times and all that.

On the way back to Lexington, Raylan and Rachel savor the memory of inflicting physical violence on Danny, and there’s a really nice, sad couple of moments of her trying to pry out the story of whatever the hell he did to piss off Art:

“I came with you in case you opened up a crack and wanted to talk about how bad you could’ve messed up that Art has a swollen fist and you’ve got a black eye.”

“You know I think the world of you and I trust you with my life, but I’m not saying a goddamn thing about me and Art.”

And it could’ve ended there, but there’s a coda to the coda: Rachel gets it.

“’Cause if you did, it would drag the whole office into a shitstorm of biblical proportion, isn’t that right.”

Back in Lexington, Allison takes her turn poking at Raylan’s hero character, which he professes not to have, which is of course part of being That Guy. “Tough job, fistfightin’ bad guys all day long.” Raylan’s not through hearing gentle, piercing truths from the women in his life tonight, and this one feels awful familiar: “I can tell you’re a man who’d run into a burning building without blinking an eye.

“The thing is, I think you’re the one that’s setting the fire.”

None, somehow, though there sure is a lot of punching.

WENDY: She’s figured out Allison and Raylan are an item; wonder what, if anything, that had to do with what happened to Allison after she left the house?

ALLISON: There are good reasons and bad reasons to run into burning buildings. Still don’t have the first clue which kind she is.

AVA: There’ve been loads of times to observe this already, in less than half a season, at how Ava’s light has dimmed, to compare the glowing young woman of the pilot with the sad figure in the jumpsuit. None have been more poignant than watching her borrow her bunkmate’s razor and steal away to the darkened bathroom, to even out the ends of her ragged hair.

Daryl is wondering where Jean Baptiste has got off to. His murder, at least within the confines of Audrey’s, is not suspected, which means either Audrey’s is somehow filthier than we thought, which can hardly be possible, or Danny and Kendal excel at crime scene cleanup. (Somewhere, Wendy lists this as a scientific internship for her little brother on a social services form.)

Some new faces to learn: Picker, Boyd, Duffy, Jimmy, and Mikey, lolling around in a room so nice that for a minute we think they’ve taken over Monroe’s joint, but it has to be a hotel suite, have got their new heroin contacts: an Alberto Ruiz and a Mr. Yoon.

4. “Gunnar’s holed up with about a half-dozen of his Hitler-humpers.”

A juicy plotline for Tim, a couple of more excuses for Boyd to say “got-damn” while striding splendidly out of someplace, and more onscreen interaction between Daryl and Danny, if only to figure out how they get along without murdering one another on a regular basis.

Did Tim linger behind in the conference room after that one scene, trying out new Theo Tonin jokes to silent walls? What’s Danny’s hair-care regimen? Will Art be content to just ignore Raylan until he retires? Seriously, does Danny have rabies?