Fade In: The Cinematic Grandeur of Lana Del Rey’s ‘Honeymoon’ 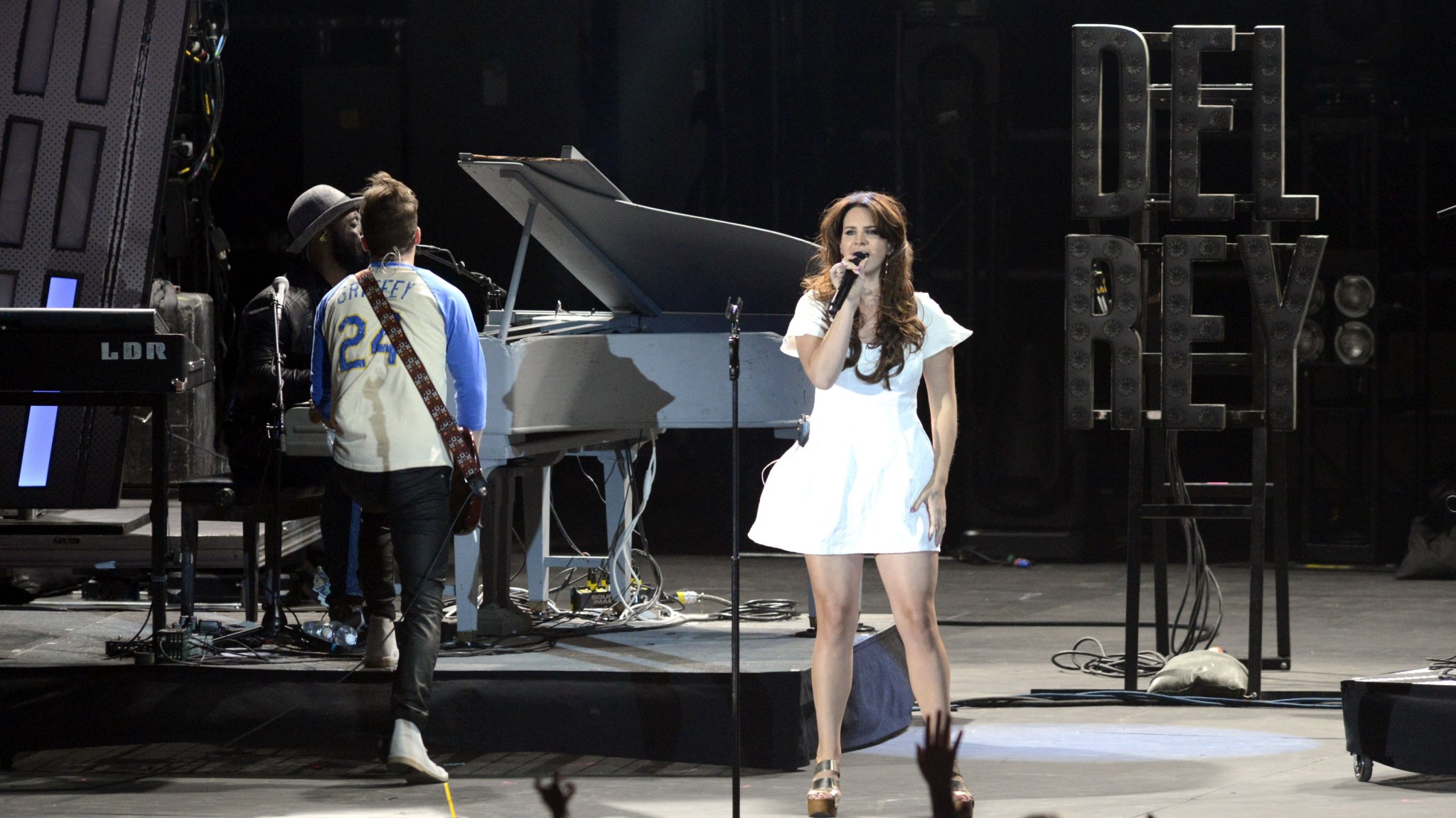 By the fourth film, you generally know whether you like a director’s work or not. The stylistic tropes and defining characteristics are set, but there’s still room for surprises. Honeymoon, Lana Del Rey’s fourth album, resembles a movie from a confident, veteran director. She doubles down on her talents as a brilliant melodist and singer, making a lush, wide-screen album that returns to her familiar obsessions while inviting us into new ones — shedding some skin in the process.

The album’s narrative seems loosely connected to Ultraviolence, which documented the dark end of a doomed relationship. Honeymoon, as the title suggests, mostly concerns a new relationship in its most idealized phase, when the perfect other feels enchanted and can do no wrong. There are also songs about a romance’s disintegration and about the feeling of longing for an absent lover. The budding relationship in Honeymoon is unlike Lana’s previous fictional relationships, in which there was always an obvious power balance tilted against her heroines in favor of their men.

On Honeymoon, Lana is more aware of her own power and abilities, even if she still ends up chasing difficult men. Italian director Federico Fellini’s fourth movie was La Strada, starring Giulietta Masina as Gelsomina, a young woman who is sold into a circus life and controlled by the domineering strongman Zampanò (Anthony Quinn). Their relationship is stubbornly codependent, and Zampanò’s abuse eventually destroys Gelsomina’s spirit. Only when he finds she’s died in relative solitude and misery does he realize what he’d done to her. Honeymoon is Lana’s Italian art film, even if it’s more of a dreamscape like Juliet of the Spirits or 8½ than the neo-realist La Strada. While Lana’s heroines have often been victims of love, on Honeymoon that’s changed. After the endless purgatory of Gelsomina-esque destructive relationships she detailed in her previous work, she now knows when to walk away and move on to the next one.

The womanly Lana of Honeymoon has put down some of her more childish playthings — there’s not a single mention of “daddy” on the album. Not that she’s stopped being obsessed with men. Her narrators just feel more self-sufficient — aware that the death of a relationship is never really the end of the world, no matter what it feels like in the moment. “Music to Watch Boys To,” Honeymoon’s second track, is a montage scene of Lana as predatory spectator of male beauty. Having played the dangerous coquette in saddle shoes to the hilt, Lana has grown into a jaded film noir femme fatale, a nighthawk at the beach.

But even if Lana has finally left her Lolita phase behind, she continues to embrace her Nabokov-like romance with language and words. Lana has such a deep back catalogue filled with dense lyrical relations that it’s spawned Lanaology — a field like Dylanology or Springsteenology that maps a universal theory of an artist’s lyrics, treating it like one long, sprawling novel. Lana, like Springsteen, is obsessed — bordering on manic — with her own iconography. Her glossary of imagery expands but remains identifiable, like a great auteur.

Her core obsessions persist: nostalgia, Hollywood, glamour, artifice, love and lust. She shares a consistent interest in hazy songs about sex, drugs, and yearning with the Weeknd, with whom she duetted for his new album. As always, she focuses her lens on love as the ultimate, all-consuming drug experience — giving rise to unnaturally high highs and low lows. Her songwriting splays out in interesting new directions while digging deeper into some of her constant preoccupations, both musical and thematic. There are bits of surf guitar, space-age pop, spaghetti Western scores, ’60s rock, drone, girl groups, and jazz. All of them are on display during “Terrence Loves You,” a proggy torch song that interpolates lyrics from David Bowie’s “Space Oddity” and brings spacey horn flourishes into its intergalactic-heartbreak sound.

On Ultraviolence, Lana got comfortable freeing herself from pop conventions — both the limitations of verse-chorus-verse form and polished vocals — in favor of something rougher, stranger, and generally slower. While her biggest hit was an EDM remix of “Summertime Sadness” by Cedric Gervais, Lana is not interested in making music for the club. She wants to write standards. Like an Antonioni movie, one viewer’s idea of slow is another’s hypnotic. The Los Angeles street-cruising imagery of Honeymoon — from the title song and album cover image of Lana on a StarLine tour bus — is instructional: You listen to this album while you drive (or get driven) around aimlessly all night in search of kicks.

Honeymoon’s strings-heavy instrumental arrangements1 directly recall Nelson Riddle’s work on Frank Sinatra’s In the Wee Small Hours — the original concept album about introspective loneliness. There is a strong Sinatra feeling all over Honeymoon. Lana really shows off her chops as a singer and experiments with the dimensions of her voice as an instrument. She only whispers when she wants you to lean in to listen. But it’s never merely retro emulation. Drum machines fraternize with snatches of jazz flute, horn sections, and celestial strings — “blurring the lines between real and the fake” just like Lana campaign-promised us in “National Anthem.”

Lana always wears her influences on her liner notes. On Honeymoon, she name-checks Tangerine Dream and Billie Holiday, references the Eagles TWICE, mentions “Lay Lady Lay” as a marker of perfect domestic bliss, and covers the Animals’ “Don’t Let Me Be Misunderstood.” She has a lot in common with the Animals’ Eric Burdon, a rock vocalist who became a lyrical stylist of the highest degree — working jazz and soul influences into garage rock to make something harder to categorize.

There’s an interlude on Honeymoon called “Burnt Norton” in which she recites a T.S. Eliot poem over some aquatic exotica loops. Despite imitators in her wake, Lana continues to broadcast from her own strange little far-off planet, in competition with only herself. The ode to California hedonism “Freak” is the most blatantly contemporary, with its trappy drums and melting screwtape feel. The chorus interpolates Adina Howard’s “Freak Like Me,” a perfect song about female sexual empowerment that memorably bent slut-shaming over and spanked it. “Freak” veers out of the darkness into an angelic bridge on which Lana’s multi-tracked vocals soar like twin lead guitar harmonies.

The production choices on Honeymoon are exquisite throughout. Lana is the queen of musical melodrama. Her exaggerated expressions appeal directly to the emotions and dredge up strong feelings like a vivid memory does. More than ever, she is interested in songs that tell a story through mood. “Art Deco” is another slow dance about long nights with a beat like a creaking door.2 Superficially smooth surfaces with jittery paranoid undercurrents also dominate on “High by the Beach.” While pop has been unusually heavy with klezmer horns for the past few years, the loping ones on “Art Deco” are the first time I can recall hearing someone use the sound to convey softness rather than raucousness.

The album’s pinnacle is “Salvatore” — a La Dolce Vita dreamscape about an Italian vacation that may or may not have something to do with Lana’s most recent beau, Italian fashion photographer Francesco Carrozzini, and their paparazzi-documented trip to Portofino, Italy, for the wedding of a Monaco royal. The chorus is jazzy and minimal, like someone singing the half-remembered lyrics to a foreign song. It’s a tarantella on benzos. The lyrics are scant and repeated — “cacciatore,” “limousines,” “ciao, amore,” “soft ice cream.” Its artistic lineage is connected to ABBA’s “Fernando.” You can easily picture a very clean-cut group singing a fast version of this at Eurovision and winning. Like ABBA or Nancy Sinatra & Lee Hazlewood, Lana’s interest in kitsch amplifies rather than mutes the purity of feeling. It’s even more authentic for all the frippery.

Beneath the bucolic façade of the vacation, with its picture-postcard vistas of glimmering cities and romantic clichés, “Salvatore” is really a call into the void for an uncertain love after the initial seduction. Lana repeats “soft ice cream” in her onomatopoeic way. The more times she says “soft ice cream,” the more like nonsense words it sounds, but the more it also feels exactly like the thing it is — transmuted into pure feeling, no longer words. It’s a sensory travelogue. Lana makes you feel the hot Italian summer, smell the salty ocean air, feel the gelato melting down your hand as it touches your tongue.

The song “24” is such a great Bond theme that they should just write the next movie around it. When she sings “Oh my god” in the chorus of “The Blackest Day” after a straight-faced quotation of  “Lookin’ for Love (In All the Wrong Places),” it’s the most religiously porny expression of pure sadness since Pulp’s “This Is Hardcore.” It’s at exactly this moment that harp glissandos fly in to feather-bed Lana’s high notes. Then Lana starts riffing on Little Peggy March’s 1963 classic “I Will Follow Him.”3 How far can Lana go from here? How deep is the ocean? How high is the sky?