The Eye of the Beholder: What David Fincher Sees 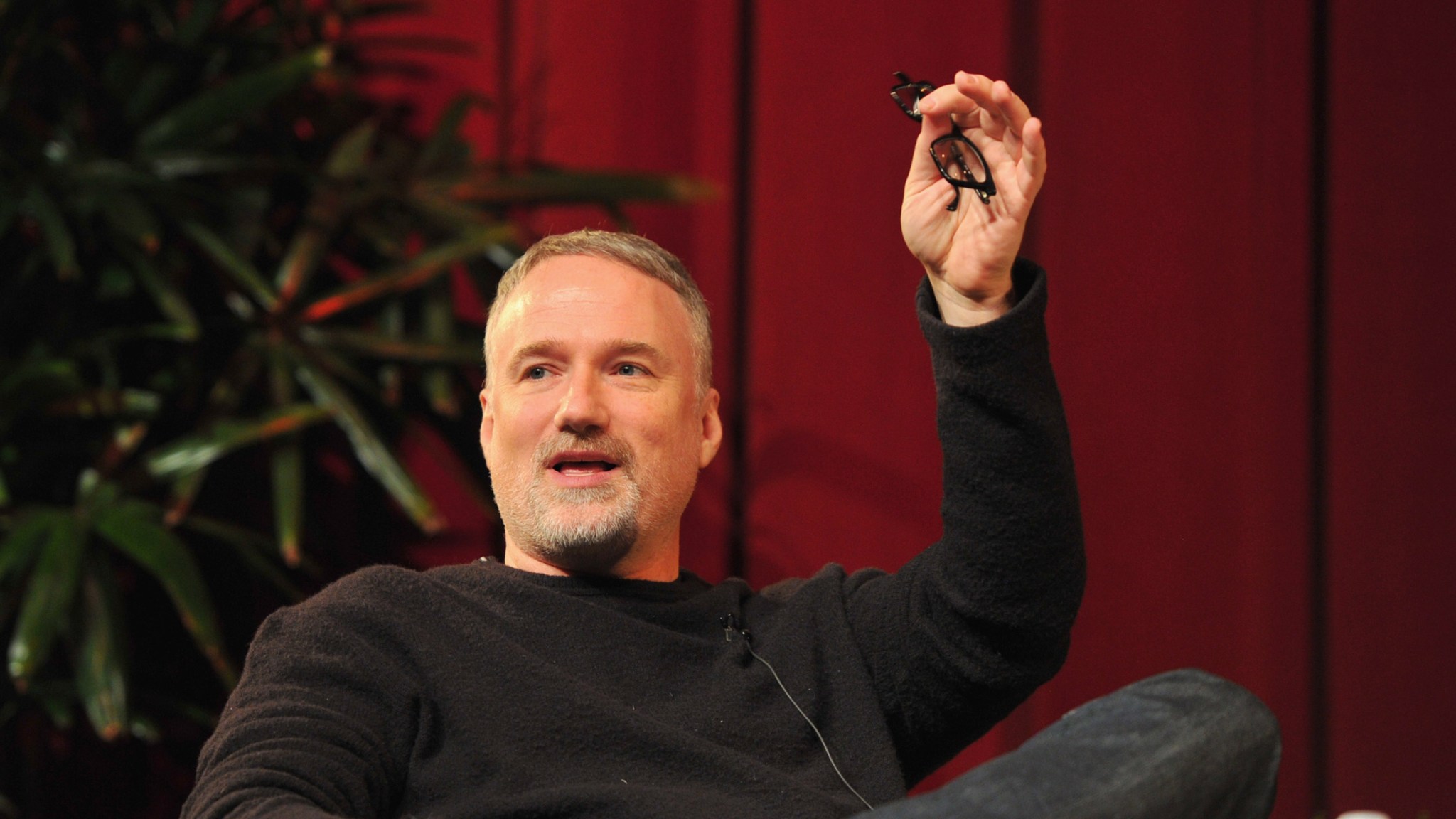 David Fincher’s directing career started in 1984 with an anti-smoking PSA for the American Cancer Society that depicted a fetus smoking a cigarette. The ironic juxtaposition of images immediately became Fincher’s calling card. It led him into an early career as a director of commercials and music videos, a trial-by-fire film school where idealistic notions about cinema are crunched into pragmatism by necessity: How much money is there? How many setups? What are we selling today? But Fincher was no generic journeyman. His characteristic style and themes are imprinted in his early work: slick glamour influenced by Art Deco; smoked-out yellows, grays, and blues; film noir imagery like Venetian blinds, shadows, silhouettes, and sensually sinister close-ups of mundane objects — coffee cups, newspapers on breakfast tables, classic cars, lighters being flicked. From the start, he depicted the majestic brutalism of urban landscapes, the giant looming skyscrapers jeweled with floors of dark, mirrored windows, as well as the uncanny domestic. He could make a hyper-familiar environment like the family home bizarre, its cloistered privacy breached by the intrusion of sin.

Fincher’s commercial and music video background are apparent in how he shoots objects and movie stars. He jokes (but not really) that the dolly operator is more important than the actors, because he considers technical aspects first and foremost, and focuses on the below-the-line crew tasked with making those things happen. He is a visual technician (and has been since starting out at Industrial Light & Magic), but his emphasis on the visual is not superficial. Fincher is concerned with how things look in relationship to what they mean. Commercials taught him how to perfectly light, frame, and shoot an object to make it sellable and imply a desirable lifestyle that goes with it. In his movies he flips it around, cautioning about what can happen when you buy a certain idea or thing and expect it to deliver on what was promised in the advertisements. He is obsessed with the superficially impressive thing that is rotting from within, be it a person, a city, or an entire institution. But he is also an actor’s director who casts the impeccably right actors in every role and lets them perform.

Like his directorial heroes Stanley Kubrick and Alfred Hitchcock, Fincher makes movies that get deep inside your head. He is also, like Kubrick and Hitchcock, a director who works within the traditional studio system and becomes an auteur there. After getting worked over during Alien³, he decided he needed full control to make anything good. At the same time, he realized he is ultimately still selling a product, and for that product to sell, it must be appealing to mass audiences. He co-opts and subverts from within the system, not always successfully or predictably. Fight Club, for instance, actually flopped in theaters, but it became one of the first commercial hits for the brand-new DVD technology. Fifteen years later, Fight Club is omnipresent in dorm rooms and the public consciousness (“the first rule …”). Its 1999 subversiveness has aged well except for one thing: It feels glaringly absent of smartphones, an unforeseen development that would render its message of humans in corporate-induced isolation from themselves and others even more prescient within just a few years. Films like Se7en and Zodiac root around in the ugliest parts of the human psyche, interrogating the audience’s desire to see terrible things happen and taking very different routes to their dark punch-line endings. He also weathers the same criticisms as Kubrick and Hitchcock: cold, unemotional, overly cynical. But Fincher, like Kubrick and Hitchcock, is just unsentimental. He is interested in emotions, but real, raw ones that people would rather conceal, which come out via micro-slips.

Status objects recur as a theme in Fincher’s videos: the newest technological object, the best-looking vintage car, the most beautiful women (and men, particularly in Madonna videos). But that high-status image is always vulnerable, capable of being undone by an intimate violent crime (“Janie’s Got a Gun”) or a hot girl crawling on all fours (“Cradle of Love,” “Express Yourself”). Watching the entire Fincher videography feels like witnessing automatic writing. Despite the tightness of the videos, planned out to the millimeter, the images and setups that reappear over and over are dreamlike; they appear almost pseudo-subconscious. Elements of commercials, beautifully lit products and narratives of pleasure through consumption, are satirized and twisted. Many of the videos are performances fleshed out with miniature film noir narratives, the atmosphere cloudy with sex, violence, and nostalgia — which uncoincidentally are the themes of Gillian Flynn’s novel Gone Girl, which Fincher directed from a script adapted by Flynn.

Serious relationships are like murder mysteries. The charming public selves that initially seduce are eventually killed off by uglier, more private selves. Every couple, no matter how happy, has arguments. But there’s so much pressure to present the perfect self that the pressure becomes a wrecking force. Flaws are created and revealed. No one can ever measure up to the impossible perfection of the images we see everywhere, every day. The process of uncovering new clues about your partner never ends. But that is also where intimacy begins. Fincher teases us, then slips off the mask of social grace to reveal the monstrous selfish baby human lurking inside us all. You don’t really know someone until you’ve seen them from their least flattering angles in their very worst hours. Fincher’s obsession with endless takes feels like an attempt to see something — an object, a face — for what it really is, breaking it down by staring at it for long enough from every possible view. The question that anyone asks when she first spots the object of her obsession from across the room is, “Who are you?” That question becomes an interrogation, repeated throughout the relationship in different mental tones as each new layer is peeled back. No really, Who are you? In the novel Gone Girl, the question of who one’s partner might really, secretly be has potentially deadly consequences. This tension between surface and depth, concealment and revelation, iconography and psychological drama is mirrored in the technical aspects of constructing a mystery for film. The director’s goal is to sustain the pleasurable ambiguity until the last possible moment.

A murder mystery film (as with all films) must conceal that it is a construction, like a dark ride that allows you to ignore the show building it is housed in. Each new reveal must occur at the precise moment along an invisible rhythm that, when executed well, will drive every viewer to experience the same feelings simultaneously as if of their own accord — to cry, laugh, and be aroused or scared (or both) on cue. In order to get the audience into this relaxed state, its members must first be seduced with characterizations and settings that will make them feel comfortable and relaxed, all the better to begin twisting the knife. The amount of work that goes into constructing this sense of spontaneity — the legendary hundreds of takes Fincher does, the editing, the script, the framing, the lighting, the sight lines, the angles — must all be unnoticeable in the end result. The clues, the possibilities, and the eventual resolution have to unfold in a way that feels effortless. It’s the appearance of effortlessness, after all, that is so very attractive.

Gone Girl the book is an extremely clever evisceration of what really goes on inside relationships, and how the facade of outward perfection implied by an idea like marriage can in fact be a very overwrought cover for the difficulties anyone incurs on a day-to-day basis trying to exist, let alone coexist with someone else. That one’s own relationship appears perfect and idealized to other people has always been a part of human vanity.1 Fincher promises to explore the grimy underside of the ideal of domestic life with Gone Girl. He has already shown himself to be a master at depicting the eeriness of suburbia with Zodiac. Gone Girl goes inside the house to its heart, the bedroom. But it also goes deeper into some of Fincher’s established psychological and emotional themes — rotting Americana, the gamification of contemporary culture, gender role androgyny — and allows him to confront the ultimate film noir archetype: the femme fatale, a beautiful, intelligent, very sexual woman who becomes the hero’s downfall. (Although in Gone Girl it’s equally possible that Ben Affleck is the femme fatale. Fincher has shown a fearlessness about objectifying beautiful men in an unrepentantly homoerotic way since long before Fight Club, having been in the trenches of “Vogue” with Madonna.)

In Flynn’s Gone Girl, sexual obsession is intertwined with bloodlust, love with hate, intelligence with riding the far edge of sanity. The culturally sacred concepts of marriage, love, and lifelong partnership are put under a lovingly harsh microscope. Love is the mutual parasitism of symbiosis, a purposeful chemical imbalance that makes us giddy and crazy, permanently wired for the next hit. As much as we want to believe that a marriage is a union between two souls, it is still a negotiation between two different human beings. A relationship between equals means a process of wrestling for control. At times, the two perspectives contradict each other but are both true. Gone Girl the book literalizes this struggle by alternating narrators; the chapters are written in tandem by Amy Dunne and her husband Nick Dunne. Concrete events occur, but each person interprets them subjectively, often very differently. By exploiting this structure, Flynn makes the reader a voyeur, offering two views limited in scope and stoking a desperation to see more. We are too distracted by the dual perspectives to pay much attention to how we are being manipulated by a master-god perspective. The trick is too dazzling; you don’t really want to see how it works.

In a murder mystery, as with all voyeurism, the thrill of the full reveal is not necessarily as high as the sustained anticipation of it. Zodiac is a whodunit that (spoiler alert) never answers the question it poses, in fidelity to real life, making each viewer feel as obsessive as its characters. Authors and directors seemingly get to exert a full 100 percent control over a work of art, but they, too, are beholden, locked in a death-embrace of love and resentment with their audiences, whom they must please with familiarity but also continually surprise, as in any good relationship.

Flynn’s take on romance is acid-tinged but clearheaded: If you really love somebody, you also want to kill them sometimes. The book is very funny, and makes it clear that what binds Nick and Amy together most is their perverse sense of humor, their ability to laugh at their own ridiculous follies. I am exaggerating about the bloodlust of course, but no matter how much you care about your family, there will come a long car trip when you will be ready to go Jack Torrance on them. It’s sweet, in a sick way. You only want to murder them because you care about them so much. It’s exactly the kind of sick joke that would appeal to a director like David Fincher. If love is a folie à deux, then Fincher and Flynn seem made for each other.