Box Office by the Numbers: ‘Dawn of the Planet of the Apes’ Takes Over With $73 Million 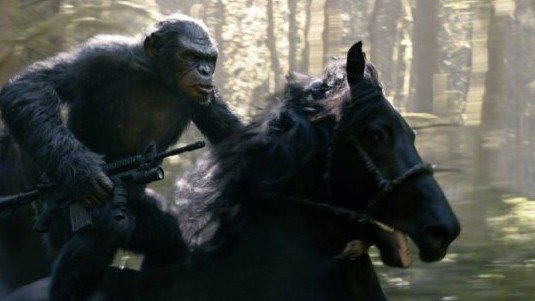 4: Sequels in this weekend’s top five.

$73 million: Domestic weekend total for Dawn of the Planet of the Apes. In accordance with just about everybody’s feelings that the sequel is better than the strong 2011 predecessor, Dawn significantly outearned Rise of the Planet of the Apes’s $55 million opener. Dawn’s debut isn’t a a box-office explosion on par with the Godzillas and X-Mens of 2014, but it’s a series best, passing Tim Burton’s 2001 Planet of the Apes by $4.5 million. It’s also an easy career best for director Matt Reeves, whose previous record was 2008’s Cloverfield, which launched to the tune of $40 million. Dawn shouldn’t have trouble clearing Rise’s $177 million American total, but we’ll see how it does versus the $482 million global haul the series earned last time. Dawn’s first weekend overseas was pretty light, bringing in just $30.4 million.

7: Dawn of the Planet of the Apes’s ranking on Gary Oldman’s career openers chart. All six ahead of it are Harry Potter and Dark Knight movies.

1: Oscars Andy Serkis needs to finally be nominated for, motion-capture and all.

36: Percentage of Dawn’s revenue that came from 3-D tickets.

$2.45 million: Third-weekend total for America: Imagine the World Without Her, a documentary by Dinesh D’Souza, the conservative author who made 2016: Obama’s America a couple of years ago. (He only makes movies with America in the title. For now. Maybe forever.) Firstly, that’s a great hold from last weekend, dipping just 11 percent. Secondly, this thing’s already “the 7th highest grossing partisan political documentary of all time.” It’s playing in 1,105 theaters, but isn’t anywhere overseas yet. Expect to see this one for a little while.

$16.5 million: Third-weekend domestic total for Transformers: Age of Extinction, which has quickly fallen from its $100 million opener. (It dropped to $37.05 million last weekend.) Internationally, T4 passed the $750 million mark, although Box Office Mojo predicts it will skid to a halt somewhere below $255 million in the States.

$12.9 million: Second-weekend domestic total for Tammy, which opened in second place over the weak Fourth of July weekend. Tammy’s $57.35 million (plus $2.5 million from theaters abroad) is still miles behind The Heat’s $160 million American total and Bridesmaids’s $169 million. Even McCarthy’s poorly received Identity Thief made it to $134.5 million.

$6.7 million: Fifth-weekend total for 22 Bro Street, which has been chillin’ in the top four the whole time it’s been alive. It passed $170 million at home and $250 million worldwide this weekend. Ready to start seeing a bunch of those 22 imaginary sequels?

$669 million: Maleficent’s worldwide total. The Disney/Angie joint is now the 72nd-biggest movie of all time worldwide. (Transformers: Age of Extinction, though, is no. 54. And The Amazing Spider-Man 2 is no. 66.)

$2.9 million: Total for Begin Again, the Keira Knightley/Mark Ruffalo indie from Once director John Carney. The film is now playing in 939 locations.

Filed Under: Box office, box office by the numbers, Movies, dawn of the planet of the apes, transformers: age of extinction, tammy, 22 jump street, maleficent, begin again, america: imagine the world without her, dinesh d'souza, Matt Reeves, Gary Oldman, how to train your dragon 2