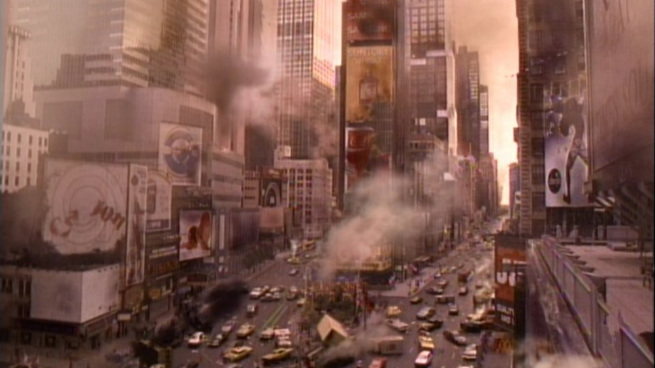 This summer, two serialized horror shows — FX’s The Strain and HBO’s The Leftovers — set their stages in hyper-natural worlds that resemble our own but with fatal twists. And both shows’ takes on the genre of spooky Americana call one name to mind: Stephen King, America’s most prolific and best pop-lit author. They may not be descended from King’s work in name, but they certainly are with him in spirit, and share many of his favorite themes.

Fitting Into the Classic American Horror Tradition: Although The Leftovers and The Strain both take place in New York state (The Strain in Manhattan and The Leftovers in the fictional upstate New York town of Mapleton), there is a distinct link to the early American horror tradition of New England. Small-town Mapleton is an awful lot like King’s small-town Maine. The Strain’s protagonist, Dr. Ephraim Goodweather (Corey Stoll) could be straight out of H.P. Lovecraft, a known influence on series creator Guillermo del Toro. Similarly, while a lot of Edgar Allan Poe’s narrators are nameless, when his characters do have names, they too tend to be somewhat goofy or archaic — Augustus Bedloe, Barnabas Shuttleworthy, Egaues. Poe also wrote a famous poem called “The Conqueror Worm” that The Strain recalls in a particularly squirmy way.

The theme of a small town poisoned by evil forces is a mainstay of Nathaniel Hawthorne short stories like “The Minister’s Black Veil,” “My Kinsman, Major Molineux,” and “Young Goodman Brown,” in which a naive young man witnesses a pagan ritual in the woods of Salem, Massachusetts. While The Leftovers isn’t as focused on spooky paganism as, say, True Detective, the Rapture has definitely led to some culty and primal behavior on the part of Mapleton’s townspeople.

Fighting to Save a Dysfunctional Marriage: In The Shining, when the Torrance family packs it up for the Overlook, they have no idea it’s going to cause the breakdown of their marriage over their son’s weird psychic abilities and dad’s increasing insanity. The fragility of long-term romantic relationships is a common theme in King’s world. He’s the Raymond Carver of horror. King is adapting his 2010 novella A Good Marriage (you can probably guess that the title is ironic) into a screenplay, which is currently being filmed.

Postapocalyptic Worlds: In King’s seminal postapocalyptic caravan novel The Stand, it’s a virus named “Captain Trips” that starts to wipe out the population. In his 2006 novel Cell, cell phones spread a brainwashing disease. And in his series The Dark Tower, there have been so many different apocalyptic events that space-time itself starts to mutate. In The Leftovers, it’s an unknown event that caused a couple thousand humans to shake off this mortal coil; and in The Strain, it’s a mysterious worm-eye virus.

Daddy Issues: Daddy issues abound in King’s work, especially in The Shining, and The Leftovers and The Strain both also deal with paternal problems, primarily what it’s like to be a dad and simultaneously aware that you are a deeply flawed human being. Kevin Garvey has to navigate his uncomfortably hot children and uncomfortably delusional dad. Ephraim Goodweather is fighting to get his kid back from his ex-wife and her new boyfriend, while also combatting a spreading worldwide worm-eye epidemic.

Alcoholism: Dr. Goodweather attends an AA meeting (which is probably a good idea because we all know about Peter Russo’s addiction issues). Volatile alcoholics reappear throughout King’s work, and King himself has openly struggled with alcoholism and other addictive behaviors throughout his life, admitting to having been blacked out essentially the whole time he was writing 1981’s Cujo . In King’s Shining sequel Doctor Sleep, published last year, Danny Torrance has matured into an adult alcoholic like his dad.

Hyper-Charismatic Brown-Haired Male Lead With Widow’s Peak: In Stanley Kubrick’s The Shining, Jack Nicholson’s Jack Torrance has more of a frontal hair patch than a full-on V-formation. Justin Theroux maintains his natural widow’s peak on The Leftovers to play police chief Garvey, and for whatever reason, the wig-makers on The Strain decided to work a widow’s peak into the hairpiece Corey Stoll wears to portray Dr. Goodweather. There is a bit of Nicholson’s Jack Torrance in both Kevin and Eph, who are both prone to quipping their way through dark situations, possibly as a defense mechanism against the dark situations in their own brains.

Killer Dogs: The Leftovers features wild packs of rabid dogs that Theroux’s character may or may not be shooting to let off steam. Which of course, brings to mind Cujo.

Body Horror: Oh, boy, does Stephen King love body horror. Who doesn’t! The “shit-weasels” in Dreamcatcher are a lot like the worms on The Strain, only they’re tapeworms that live in the toilet. The Stand’s virus gives some of its victims “tube neck.” King has dealt specifically with Eyeball Horror in It, Under the Dome, The Green Mile, and The Stand, among copious others. He’s a big fan of describing people’s eyeballs melting from heat. So far there is no eyeball horror on The Leftovers, but it’s early yet!

Filed Under: TV, the strain, the leftovers, Stephen King

Box Office by the Numbers: 'Dawn of the Planet of the Apes' Takes Over With $73 Million

Who's That Guy?: Christopher Eccleston, Who Just Got His Own Episode of 'The Leftovers'!