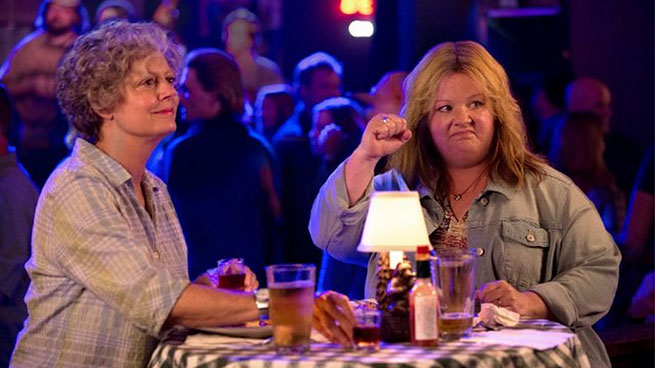 Maybe Americans have finally, truly, deeply embraced Fútbol: The Beautiful Game. At least that’s the excuse some pundits are pitching to explain this Fourth of July’s massive box office boner: “because World Cup.” As fun as it is to get drunk at noon and watch Uruguayans take a bite out of Italy, we all know better.

Personally, when I stepped out of the bar last Tuesday foreswearing Belgian ales after Team America’s less-than–“fuck yeah!” performance, two hours in a dark theater with mind-numbing explosions was exactly the consolation I needed. The one problem: Hollywood just wasn’t there for me. My only new choices were a horror movie starring Edgar Ramirez, E.T. refried by way of found footage (Earth to Echo), and Melissa McCarthy’s indie passion project disguised as summer comedy Tammy. Not exactly the kind of offerings that get one’s popcorn glands raging. Sure, I could have gone to see Transformers again; but much like sticking your hand in a garbage disposal, that’s something you just don’t do twice.

How bad was it? Let’s roll through the numbers:

Total box office was down 44 percent compared to last year — last year’s Fourth famously featured The Lone Ranger bombing like a theater-side IED, but Hollywood still grossed $100 million more. In fact, if you factor in ticket price inflation and think in terms of admissions, you’d have to go back to the ’80s to find an Independence Day weekend this bad.

Transformers dropped a whopping 63 percent in America. In its second no. 1 weekend, Michael Bay’s Robosauriad grossed $37 million in America — which doesn’t sound that bad until you realize it was playing on 4,233 screens: i.e., any building in America that had a projector and sold popcorn.

Tammy, the best-performing new release, reaped $33 million on 3,400 screens. For comparison: Her previous hit, Identity Thief, pulled in more money on its opening weekend in February, the graveyard of new releases. And Tammy‘s $33 million was over the five days starting July 2.

So, what have we learned?

So, why would Hollywood wittingly drop the ball on one of the bigger moviegoing weekends of the year — the weekend that’s given us Independence Day, Men in Black, Hancock. Well, for one, the heady days of Will Smith–size stars are over: Even Will Smith isn’t Will Smith anymore. So, the most immediate reason the Fourth of July fizzled like a beer-soaked sparkler is because every other studio ceded it to Michael Bay — Transformers: Age of Excessive Titling essentially had two opening weekends. However, the wisdom of such group fear is debatable: Moviegoing begets moviegoing, and man cannot live on Mark Wahlberg and robot-cars alone.

2. The Only Thing That Hollywood Fears More Is The Lone Ranger

But why cede the ground to Michael Bay? There had to be some of our hard-earned cash left on the table. The problem is that Hollywood really doesn’t make the medium-size movies that could feed off the scraps that Transformers’ robot dinosaurs let fall from the table. 2013 ultimately turned out to be another “record” year, but the bombs along the way really hurt some studios’ bottom lines: The Lone Ranger, RIPD, and After Earth. The industry is so dependent on nine-figure-budget spectacles that it makes more sense to take a pass on a risky release date rather than let your marquee franchise/reboot/nth sequel slip on Grimlock’s robo-droppings. The fact that the Fourth landed on a Friday and thus dragged us away from movie night to Hoover up burned hot dogs and warm beers at our neighbors’ backyard BBQs also probably took a bite out of profits. Better to hold back your good stuff than come face-to-face with an angry Optimus Prime.

3. Melissa McCarthy Will Be Fine …

In their haste to find order in chaos, a lot of pundits seemed to blame Melissa McCarthy’s underperforming Tammy. How dare the new queen of comedy not gross $50 million! In fairness to McCarthy, the perception is worse than the narrative being spun that audiences are already tired of her shtick. Tammy cost a fairly reasonable $20 million and will probably pull a profit, even given what Warner Bros. spent to plaster America with ads in 10,000-point font. If anything, I consider it progress that a female comedian’s career is getting analyzed with the same breathless hyperbole applied to Adam Sandler, Jim Carrey, and Owen Wilson: We’ve come so far! McCarthy will survive; she’s only one Sundance hit about a single mom with cancer who takes down the global fracking industry from winning an Oscar. Or maybe just something quirky with Bill Murray will do the trick.

The larger story this weekend is that so far the studios’ summer cash-farming season has been a huge disappointment stateside. Summer moviegoing has been so bad that the North American box office is down 4 percent on the year from 2013. For studios that survive on thin margins that’s a scary percentage; and their greatest fear is that we’re all collectively exhausted by event movies: What if we were all collectively more excited by the Game of Thrones finale than anything this summer has to offer? Yes, there’s still half a summer’s worth of releases left; but as Entertainment Weekly noted, it’s a funny place to be, counting on talking apes (Dawn of the Planet of the Apes) and machine-gunning raccoons (Guardians of the Galaxy) to save the day.

Still, is the sky really falling? Not quite. For one, there’s a whole half of a year remaining with a new Christopher Nolan film, Gone Girl, and a Hunger Games sequel. And 2015 is already overstuffed with high-hopes franchise fare that could make up for 2014’s underperformers: Jurassic World, Terminator: Genesis, Avengers: Age of Ultron, the delayed new Fast & Furious and J.J. Abrams’s Star Wars. It’s so crowded that Warner Bros. has already pushed the Batfleck (Batman v Superman: Dawn of Justice) into May 2016. Moviegoing is cyclical — and not all the blockbuster cylinders always fire at once — so we’ll have to wait till 2015 to see if the blockbuster is really dying.

More importantly, as always, the rest of the world is saving the day. All those modest domestic hits become supersized when you look at their worldwide grosses: The top 10 movies of 2014 on average made almost two-thirds of their money overseas. Criminally underappreciated The Edge of Tomorrow hasn’t cracked $100 million here, but it’s at $340 million worldwide. So, Tom Cruise will live to run another day. And even when we eventually do get so tired of Transformers vs. Gobots: Rise of the Justice Machines (Dear Dreamworks, all thank-you checks for this idea should be made out to J.E. Lopez. You’re welcome), it won’t really matter: There’s a whole wide Bumblebee-loving world out there. In fact, in the end, the studios really did worry about the World Cup, just not on our account. They’re waiting until it’s over to release Transformers in Europe.