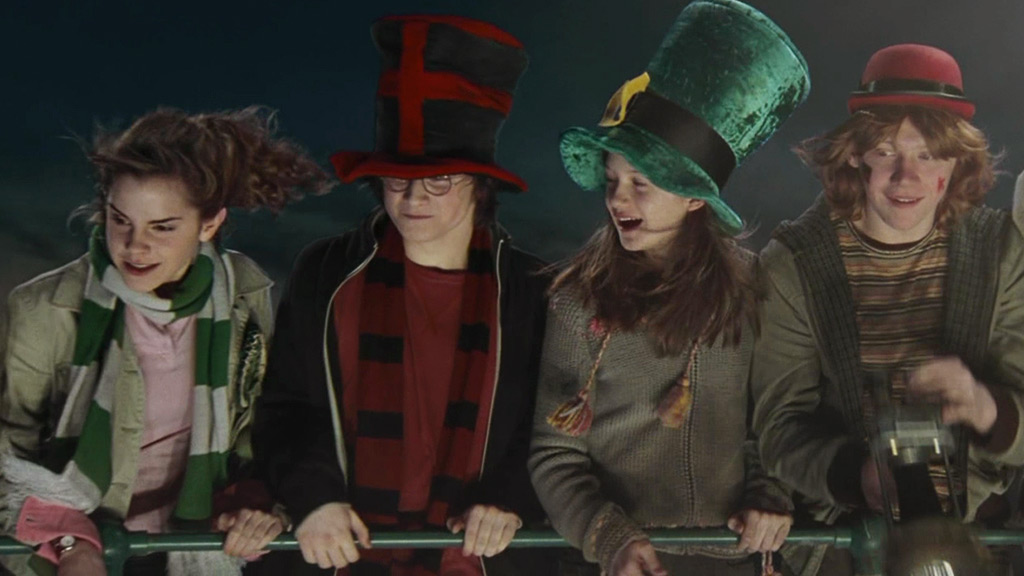 Witches and wizards, Muggles and Squibs, Potterphiles and Parseltongues: REJOICE! Today, we got a taste of how 11-year-old Harry must have felt when he awoke on Christmas morning and discovered his father’s secret Invisibility Cloak at the foot of his bed. Because today we awoke and discovered our own shimmering parcel of intrigue and wonder: a new Harry Potter story from J.K. Rowling!

At least, sort of. The Pottermore post is a Daily Prophet clipping from legendary gossipmonger Rita Skeeter, who, undoubtedly with the aid of her trusted Quick-Quotes Quill, spewed out 1,500-ish words of vitriol after spotting Harry, Ginny, Ron, Hermione, Neville, Luna, and other members of Dumbledore’s Army at the modern-day Quidditch World Cup. (If you don’t have a Pottermore account, you can read the Prophet article here. Though if you don’t have a Pottermore account, you’re clearly not sufficiently committed to the cause, and you also can’t send me a friend request at ThornWing8898, which is sad.)

And, boy, does reading Rita’s column feel like coming home again. Should we be concerned that Rowling feels compelled to keep poking and prodding her canon instead of letting her perfect creation rest? Quite possibly. Should we ignore that very reasonable instinct and instead savor every syllable of this digital Portkey back into Rowling’s magical world? Of course! Here, then, are seven important (since seven is the most powerfully magical number) takeaways from this warm Weasley sweater of a gift to readers everywhere:

1. This is a glimpse into the middle, not a glimpse into the future: Guys, I know math is hard, and I know Charms and Transfiguration seemed like a lot more fun than Arithmancy, but facts are facts: Rita tells us that Harry is on the brink of his 34th birthday, which means this World Cup excursion takes place a couple of years before the Deathly Hallows epilogue, which shows Harry & Co. 19 years after — SPOILER ALERT! — Voldemort’s fall, likely around 2017 (h/t EW). If you’re not convinced and want to continue arguing with your pals about the time frame, remember: You can always avoid a wizard’s duel by using Time-Turner jokes as a crutch. 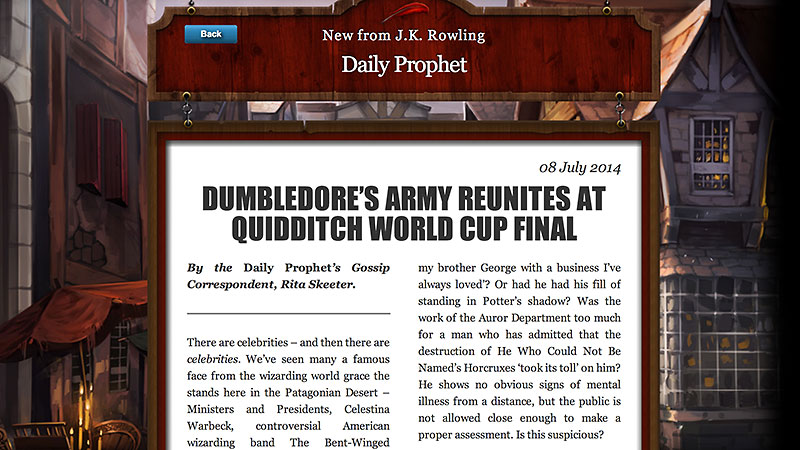 2. There’s still hope for us, fellow Ron and Hermione ’shippers: If your heart broke into seven Horcrux-shaped pieces when JKR started playing revisionist historian with Ron and Hermione’s marriage, rest easy! Rowling has since clarified her comments, and she let Rita take only one shot at the couple, by recalling Hermione “finally settling for Potter’s faithful sidekick.” Settling isn’t a nice word, but it’s better than divorce. And yes, before you ask: I remember point no. 1, and I know that Ron and Hermione are married in the epilogue; but as Rita reminds us, Hermione is a magical law prodigy, and if anyone could pull off a marriage, divorce, and reunion without skipping a professional beat, it’s our darling Granger.

3. It seems like Neville would like Bill Maher and/or Colorado: Rita describes Neville as a “popular Herbology teacher,” and while we already knew that he’d found his calling in the Hogwarts greenhouses, we did learn something new today: “Idle gossip suggests that she and her husband both enjoy a little more Ogden’s Old Firewhisky than most of us would expect from custodians of our children,” Rita writes of Mr. and Mrs. Longbottom. Well, I think we can all agree that a Herbology prof with a liking for slightly altered mental states probably enjoys a little something else during his nightcaps as well. I bet he keeps his stash behind the Mandrakes.

4. More Daily Prophet goodness is just a click away: If you’re craving more information about the magical world, you’re in luck: Rowling has posted a slew of Prophet articles about the Quidditch World Cup. Today’s Skeeter snippet is the only offering that provides additional details about our heroes’ lives, but the other clippings have another factor working in their favor: They’re penned by athlete turned scribe Ginny Potter!

5. Parentheticals have rarely if ever been used to such hilarious effect: Rita’s a pistol, and she fires her most vicious, Unforgivable Curse–level shots in the margins. Consider: “Does Hermione Granger prove that a witch really can have it all? (No — look at her hair.)” “The jury is out on whether she really had the talent or experience to be sent to the Quidditch World Cup (jury’s back in — no!!!).” “The only one who is easy to recognise is Bill who, poor man, is grievously scarred from an encounter with a werewolf and yet somehow (enchantment? Love potion? Blackmail? Kidnap?) married the undeniably beautiful (though doubtless empty-headed) Fleur Delacour.” I hope Madam Pomfrey has some salve for those burns.

7. There’s so much Harry going on: Friends (I think I can call you friends after taking this journey with you, no?), this Prophet post is just one of the many Harry-related happenings currently (or soon to be) available for your enjoyment. The Fantastic Beasts and Where to Find Them movie franchise looms; Diagon Alley is now a part of Orlando’s Wizarding World; and the fan-run website Hogwarts Is Here is offering a full suite of wizard coursework. 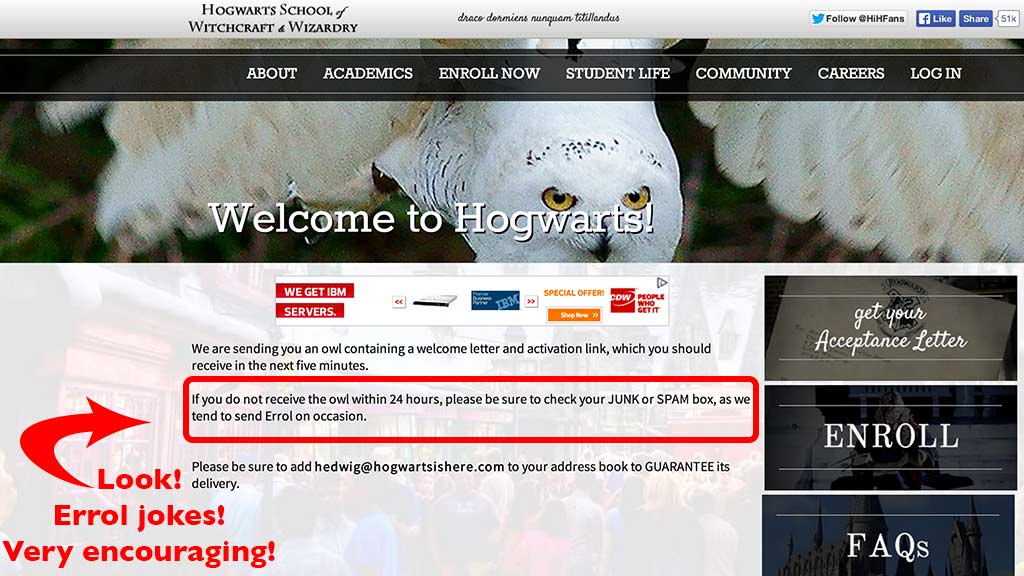 Plus, if you’re open to enjoying JKR in non-Harry realms, you can read The Silkworm, the recently released second installment in the mystery series she’s penning under the pseudonym Robert Galbraith.

And if you believe in Easter eggs, you’re probably thinking what I’m thinking: We might get to read more of Rita’s barbs soon: “For those who want to know exactly how imperfect they are, my new biography: Dumbledore’s Army: The Dark Side of the Demob will be available from Flourish and Blotts on July 31st.” July 31? That’s Harry’s birthday. Maybe we’ll get another gift to help us celebrate.

Or maybe we’ll keep waiting, biding our time playing Russian roulette with Bertie Bott’s Every Flavor Beans until the glorious day when Rowling drops a legitimate sequel into our laps. It could happen, right? Remember what Dumbledore told Harry: “Of course it is happening inside your head, Harry, but why on earth should that mean that it is not real?” Well, some of Rita’s words have made their way inside my head, namely: “The famous lightning scar has company: Potter is sporting a nasty cut over his right cheekbone … So what are they hiding? Is the Chosen One embroiled in fresh mysteries that will one day explode upon us all, plunging us into a new age of terror and mayhem?”

No One Will Ever Kill 'American Gladiators'