The Magic of Daniel Radcliffe 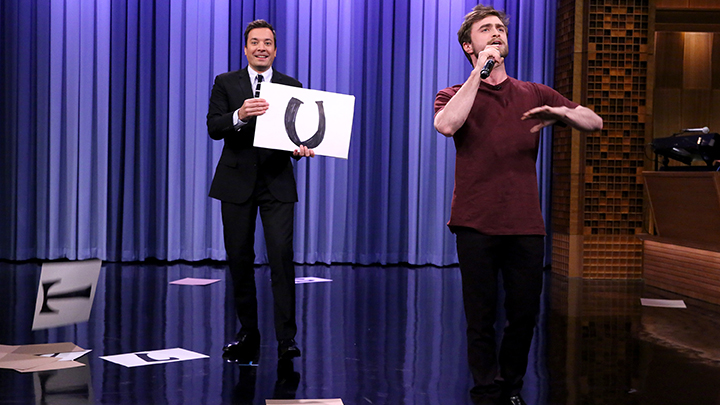 With his press tour for Alexandre Aja’s Horns taking the media by storm — to the extent that a lap of promo for what will be a little-seen movie can do such a thing — I feel comfortable making this proclamation: Daniel Radcliffe is the most charming human being in the world.

At least, that’s where my vote would go, and it isn’t because we’re both 5-foot-6 and the same age but still look like we just walked out of an undergrad lit-theory seminar. (It isn’t all because of that.) On The Tonight Show Starring Jimmy Fallon the other night, Radcliffe rapped a pitch-perfect rendition of Blackalicious’s “Alphabet Aerobics,” and not on some Karmin shit — it was obvious that he had grown up practicing this.

This wasn’t a celebrity molded in a boardroom, being deployed for strategic image-creation. It was Chris Pratt–doing–“Forgot About Dre”–level charming, and it had the same level of believability. What’s so endearing about Radcliffe is something he shares with our most beloved famous people: He seems to be defining his own existence.

This is surprising for a number of reasons, first and foremost among them that he’s Harry Potter, Boy Wizard. Radcliffe spent nearly a decade embodying one of the best-known and -loved fictional characters of his generation. As Potter, Radcliffe was an unfeeling and unflinching cipher, playing the sainted little boy in public, while in private he fell into a drinking habit he would eventually kick.

Harry Potter is the kind of fictional creation that is deeply meaningful to people throughout their lives; they don’t tend to let aspects of it go easily.Even in 2013, when The New York Times Magazine followed him to Europe, Radcliffe was so famous for being Harry Potter that he still got mobbed in the streets, nearly three years after the last movie.

He faced the dilemma that’s scuttled countless performers before him: He needed to age out of a career-defining role without damaging his actual career, or himself. All around him, other actors tried to do the same. Shia LaBeouf created a maniac tapestry of behavior and performances that became so thick and inscrutable, it essentially erased the memory of Even Stevens. Robert Pattinson ran straight into the arms of auteurs, working with David Cronenberg, David Michôd, Werner Herzog, Anton Corbijn, and Olivier Assayas. Zac Efron vanished into the ether of fights with homeless dudes on skid row, emerging as self-aware funnyman in Neighbors. Kristen Stewart is still trying very, very hard to prove that she can act, and though it doesn’t look like Camp X-Ray will catch on, this season’s Clouds of Sils Maria — also directed by Assayas, in case you like fraught connections as much as I do — and Still Alice seem like they might be the credentials she’s been looking for. And Radcliffe’s costar in Harry Potter, Emma Watson, has ascended into the sort of regal status that inspires countless BuzzFeed lists.

Radcliffe’s decisions are interesting, particularly in comparison with Watson’s. The young woman who brought Hermione Granger to life used her fame to become a global figure beyond acting: She’s a United Nations Women Goodwill Ambassador and, most recently, has headlined the UN’s HeForShe campaign. Radcliffe, meanwhile, has kept his identity almost entirely connected to acting. He’s broadened into theater, appearing, most recently, in Martin McDonagh’s The Cripple of Inishmaan. And he’s reinvented his movie career in a way that’s both remarkable and unsurprising, considering the franchise he led: He’s playing the Everyman.

Radcliffe’s first post–Harry Potter role was in The Woman in Black, a gothic-horror film that performed respectably enough to spawn a sequel (though not starring him). He followed that with Kill Your Darlings, an indie in which he played the great beat poet Allen Ginsberg during Ginsberg’s time as a student at Columbia. Playing Ginsberg was the kind of part that made sense for aging a boy-star; it had enough edge and risk involved — Ginsberg’s gay! poetry! — to make it newsworthy, but it was still a period picture about some of the most famous men in American letters.

This year is when Radcliffe started stunting. First off, he led the criminally underrated and under-seen What If, a romantic comedy in which he costarred with Zoe Kazan. Radcliffe played the best friend being staved off by a long-term boyfriend. Despite its anesthetic title — changed from the Black List script’s original, The F Word, which is better in every conceivable way — What If is one of the most edifying and enjoyable rom-coms in recent years, with Kazan and Adam Driver in superstar form.

Radcliffe plays straight man to the two of them, stumbling around like a puppy, demure and relatable; he’s a classic romantic hero in that you want him to win, at whatever cost. Aside from his performance, though, his involvement shows that he recognized the quality of The F Word as a screenplay, and there are few things more important to a former child actor than being able to choose the right projects.

Horns is different. Aside from its overwrought flashbacks, Radcliffe is on screen in nearly every frame, and it is unmistakably his movie. The story of a guy who, accused of the murder of his girlfriend, grows horns out of his head that give him powers of persuasion, Horns doesn’t always care about making sense; instead, director Aja and screenwriter Keith Bunin use Joe Hill’s novel as a tool to mess with the visceral effect of religious and psychosexual imagery. The film risks falling apart at times, as its script has many joints and transitions, but the momentum of Radcliffe’s acting keeps it tied together. This is Radcliffe’s best on-screen performance to date: He makes his character believable, no small task when he’s oscillating between depression, terror, and perversion, and excitement, confusion, and resignation.

Best of all, when you’re watching Horns, you don’t think about Harry Potter. And the hits should keep coming: Radcliffe is in the Judd Apatow/Amy Schumer comedy Trainwreck, as well as the Igor to James McAvoy’s Doctor Frankenstein. Radcliffe has grown into a human being apart from the character he once played, and whether it’s in Horns or on Fallon, he feels like an actor with dimensions and a future, not someone trying to rekindle what made him famous.