No One Will Ever Kill ‘American Gladiators’ 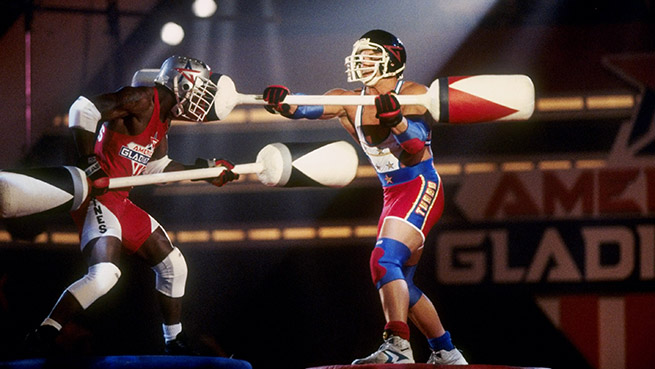 American Gladiators, which came back for two quick seasons in 2008, is being revived once again.”It’s a little darker, more intense, more serious. It’s a little less red, white and blue,” executive producer Arthur Smith tells TV Guide. “And there’s no spandex. Spandex has left the building. … This one is tonally different. It’s more post-apocalyptic. But it’s the same spirit.” As long as it’s still a series about intimidating humans with names like Titan, Elektra, Laser, and Nitro, everything should be good.

Elizabeth Mitchell (Lost, Revolution) is coming to Once Upon a Time as part of Season 4’s Frozen arc.

Drake vs. Common gets EVEN SOFTER.

“It stopped being fun. It just stopped being fun. It really wasn’t. That’s a big deal to me. It may sound like ‘Why do you have to have fun to go to work?’ I don’t know. I like to be in a good mood. The ratio of bullshit to the fun part of doing the work was really starting to get out of whack.” —Steven Soderbergh on quitting movies

Fresh off Orange Is the New Black, Lorraine Toussaint is doing ABC’s fall drama Forever, about an immortal medical examiner.

See more Christian Bale as Moses — and Joel Edgerton as Ramses — in these posters for Ridley Scott’s Exodus: Gods and Kings.

Pink Floyd has a new record coming out in the fall.

And there’s a live White Stripes record on the way. It was recorded in October 2000, on the band’s first visit to Japan.

‘Exodus: Gods and Kings’ Trailer: Let My People Go (to All the Award Shows)