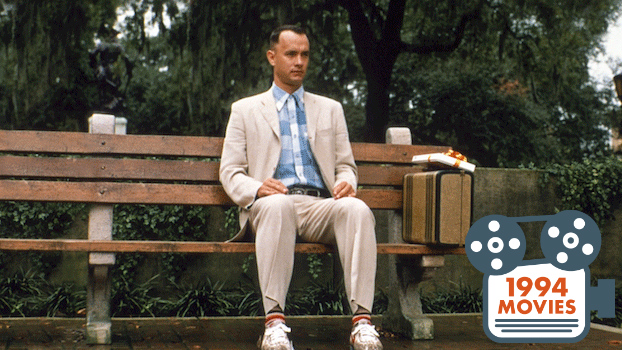 In the year 1994, the movies were great. Greater than usual. Blockbuster or indie, rom-com or action thriller, there was something indelible about so many of them. Throughout 2014, Grantland will look back at some of the most memorable, beloved, and baffling releases of that magical time around their 20th anniversaries. Today: Wesley Morris on Forrest Gump, released July 6, 1994.

Forrest Gump is basically the story of a woman who plants herself on a bus-stop bench to read her People magazine with Nancy Reagan on the cover, but makes the mistake of sitting next to a molasses-minded man who offers her chocolate and goes on about his life for the better part of two hours and 22 minutes. When she finally boards her bus, you kind of wonder what she told her family happened to her for 25 minutes after work. “Yeah, he wouldn’t shut up about how he wore leg braces when he was little and met Elvis and then didn’t wear the leg braces anymore. I felt bad that I had to go, but I had to go.” He didn’t notice. There’s always somebody on that bench to lend this guy an ear so that he can fill it with corn.

The guy, of course, is Forrest Gump, and, 20 years ago, the movie was a thing. It barely knocked the month-or-so-old The Lion King from the top of the box office. But Gump stayed there, on and off, until mid-September — which even in 1994 was rare — and didn’t leave the top 10 until November. By the time it won Oscars for Best Picture, Actor, Director, Adapted Screenplay, Editing, and Visual Effects late the next March, we had been fully Gumped. The movie was a quotable and mockable entertainment whose engine is listen-to-me narcissism. Jim Carrey had just become a movie star then, and you can imagine a harassing, broader version of this movie in which this story is told with a pair of talking buttocks.

But, of course, the movie had Tom Hanks as Forrest, so you were less likely to notice the benign narcissism or the autism (if that’s what it was; there are lots of disorders and diseases in this movie, and the only one that goes by name is cancer). What you notice about Hanks’s hick drawl, rigid posture, and social awkwardness is how non-actorly they are. He has the carriage and youth and short, V-snapped haircut of a Norman Rockwell painting. He takes what is essentially a cartoon character in a cartoon movie and seizes on the innocence of the operation. Hanks had won the Oscar for Philadelphia that March. He was already a star. This movie made him an American saint.

The movie famously uses digital trickery to place Forrest at the White House and on Dick Cavett’s talk show, where he gives John Lennon the idea for “Imagine.” He’s too pure to know to take credit for that or for the other bits of artistic and commercial inspiration he creates. Forrest is too pure to understand racism or sexism, but innocent enough to believe that we’re all just folks. He’s on campus when George Wallace denounces the integration of the University of Alabama. When Vivian Malone, one of the new black students, drops her notebook on the way inside a building, the visual effects team makes it so that Forrest picks it up and hands it to her. He’s sent to Vietnam and becomes a war hero.

At the time, the effects were the selling points: Forrest telling JFK he’s got to pee, Forrest mooning Lyndon Johnson, Forrest becoming a Ping-Pong wizard. He’s barely on the periphery of American upheaval in the 1960s and 1970s, but the movie nudges him toward the center. But the movie’s got a double quasi-historical narrative. Forrest accidentally becomes a football hero and fights racism. He goes to war and to China. Meanwhile, everyone he loves dies, but before his beloved Jenny (Robin Wright) does, she lives the antifeminist countercultural alternative.

The Winston Groom novel that inspired the movie was completely reupholstered by Roth so that Jenny becomes the repository for the country’s sins and toxins. She plays “Blowin’ in the Wind” wearing mostly a guitar at an exotic dance club. She turns into a sexed-up junkie who, in a druggy, suicidal stupor, climbs up onto the ledge of a high-rise balcony and considers throwing herself off, but in the way that Tawny Kitaen used to appear in Whitesnake videos. At one point she plays music on the Hollywood Walk of Fame, across from both Jean Harlow’s star (dead at 26) and a movie-palace marquee advertising Rosemary’s Baby. Her white, peacenik lover slaps her around while a bunch of Black Panthers stand around doing nothing. Wright was still best known at the time as Buttercup from The Princess Bride, so naturally the screenwriter, Eric Roth, names the peacenik “Wesley.” Even the winking allusions treat her with blatant contempt. If Forrest’s life is a cartoon of imperviousness to tragedy, a celebration of the upside of foolishness, Jenny’s is cautionary camp. She came from an abusive home and therefore spends her life looking for more hurt. Luckily, whenever there’s a man to degrade her, Forrest is there to go from Gomer Pyle to the Incredible Hulk.

“You can’t keep rescuing me,” Jenny says. But that’s Forrest: He looks at her and sees Buttercup.

Robert Zemeckis has never known what to do with women. “I’m not bad, I’m just drawn that way,” Jessica Rabbit’s line from his Who Framed Roger Rabbit, pretty much sums up the Zemeckis lady experience in movies like Death Becomes Her, What Lies Beneath, and Flight: They are killers and victims. Excusing Contact, in which Jodie Foster goes to outer space, he’s got a limited tolerance for complex women. But that is part of Zemeckis’s talent: He can entertain you past your exasperation, or most of it anyway. He’s a visual, science-fiction director who has maintained enough of an interest in human beings to pass as one himself. Gump opens and closes with crane shots of a feather floating toward and away from Forrest’s feet. In both shots, he’s alone. As the camera pulls in and, later, out, the character appears to be sitting there in sleep mode, like a coin-operated storytelling robot. It’s tempting to think the movie was such an enormous hit because people wanted to keep feeding him quarters. (Mykelti Williamson is a miracle as Benjamin Buford Blue — or Bubba, Forrest’s black, backwoods doppelgänger whom he meets on the way to Vietnam. This is a part that should leave you shaking your head. Williamson juts out his lower jaw and looks pensive as he and Forrest fall in low-IQ love. If he’s playing a stereotype, you honestly don’t know what the stereotype is. He’s doing what Hanks is doing only with less Hanks and a lot less screen time.)

But generally, with Zemeckis it’s the gimmickry of his filmmaking that can thrill you. Forrest running with Bubba in his arms while napalm bombs explode behind them is still impressive, and some of the cutting has a good comic rhythm. But as a director, Zemeckis doesn’t make great, grand movies. All the thought with him is technical. The ideas are all surface — and, at best, they’re murky. In something like the Back to the Future series, the technology was the idea. It was a license to play with time, space, and pop history. Genre suits him; it gives him something to tinker with and combine. What Lies Beneath was a ghost story/marital drama/murder-thriller, Flight a plane crash-rehab dramedy. Gump  is more like Roger Rabbit, though: live action and animation.

These movies are convincing as contraptions. Of course, you open Forrest Gump at the height of summer: It’s Six Flags Oliver Stone. The political banality wears on you. So does the barrage of songs that never stops. Zemeckis treats the soundtrack like the radio equivalent of an overflowing toilet. But what do I know? The multi-disc Gump soundtrack was a thing, too: gluttony for oldies and classic rock heads who love stuff like “Everybody’s Talkin’.”

A couple of weeks after the release of Gump, James Cameron would deliver a more alarming battery of effects with True Lies, as well as a woman who’s treated almost as badly as Jenny. But Zemeckis’s movie was speaking to a generation of people out of both sides of its mouth. Baby Boomers needed their history and nostalgia served to them like baby food. Gump’s centrism could please everybody. At the Oscars, it was up against the outraged thunder of Quiz Show, the scuzzy, high-voltage comedy of Pulp Fiction, the tweaked tastefulness of Four Weddings and a Funeral, and the absurd redemption of The Shawshank Redemption. Its win might be an industry’s wish to honor adult entertainment, good craftsmanship, and who’d-a-thunk-it box-office returns, but it’s really an anti-righteous historical picaresque that seems more epic than it actually is. The floating-feather gimmick that opens and closes the movie seems right for a film that still doesn’t feel like it weighs anything.