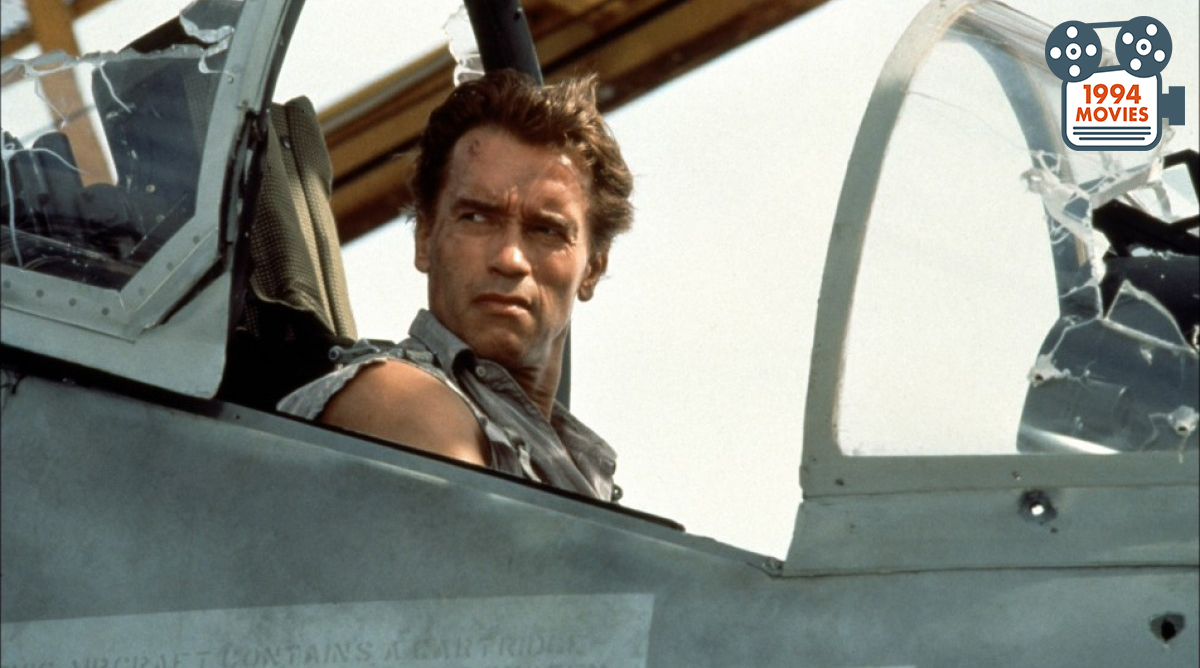 I was excited to rewatch True Lies. It seemed overdue for a reevaluation. If the first movie ever to cost more than $100 million (it topped out at a reported $120 million) can be credibly described as a “small” movie, then True Lies is indeed relatively petite. It is situated in James Cameron’s filmography between Terminator 2: Judgment Day, arguably the greatest summer blockbuster ever, and Titanic, which, c’mon, is freaking Titanic. Compared to those movies, True Lies is practically an art film, delivering the goods one expects from a golden-era Schwarzenegger flick while also skewering the whole ridiculous enterprise.

At least that’s the True Lies I remembered. I hadn’t seen it in at least 10 years. The prospect of watching it again — I even bought a used DVD for $2.99 rather than rent it, because I figured I’d definitely want to see it more than once — pushed hard on my mid-’90s nostalgia buttons. I couldn’t wait for the knowingly silly action sequences, like when Ahh-nold chases that terrorist dude through that high-rise, and he’s on a horse and the terrorist dude is on a motorcycle, and the terrorist dude does a jump off the roof and into a swimming pool that’s like a mile away. Or the part when Tom Arnold hides behind a light post to avoid machine-gun fire, and improbably avoids getting torn to bits. Or that part at the end when Schwarzenegger is flying the jet and shoots a rocket that sends the bad guy flying into a helicopter full of more bad guys. I think the bad guys had just nuked an island in the Florida Keys? Also, wasn’t Tia Carrere in this? Seriously, Tia Carrere?

This was going to rule.

Only it didn’t. Instead, I discovered two things:

2. I had never seen True Lies in its entirety in one sitting. I had seen all of True Lies, but only over time and over many viewings, usually in 15- or 20-minute blocks. True Lies was one of those movies that always seemed to be on in the background at a friend’s house or in some guy’s dorm room. It’s also constantly on cable, and if True Lies is on cable, you know you are going to watch it for 15 or 20 minutes each time it’s on.

Finally watching True Lies from beginning to end all at once made me realize that I’d seen the same handful of 15- or 20-minute blocks many times, and other parts barely at all. Everything I recalled about True Lies occurred in either the opening third of the movie, which is set up like a sly James Bond parody (this is when the horse vs. motorcycle chase takes place), or the final third, which is an extended set piece involving the jet and the fun-filled nuclear destruction. The part of the movie I forgot about is the part in the middle, which is about the humiliation of Schwarzenegger’s character’s wife, Helen, played by Jamie Lee Curtis. Apparently this section of True Lies was easy for me to overlook as a teenager and twenty-something bro. Now, not so much.

Let me quickly recap the second act of True Lies, because I’m sure I’m not the only one who has unknowingly blocked it out. Curtis is in the dark about Schwarzenegger being an ass-kicking secret agent conversant in the equestrian arts — she thinks her husband works a boring computer sales job. (That anyone would buy Arnold Schwarzenegger as a computer salesman is one of True Lies’s many in-jokes that is also played more or less straight as a plot contrivance.) Helen is a neglected housewife, and is drawn into a web of deception spun by another man in her life, Simon (played by Cameron regular Bill Paxton). Simon leads Helen to believe that he’s a secret agent when in fact he’s a car salesman. Schwarzenegger finds out about their unconsummated affair, and utilizes government resources to secretly interrogate Helen and then hoodwink her into going undercover as a prostitute in order to seduce a rogue agent (who is also Ahh-nold in disguise) in a hotel room. The payoff for this subplot is an extended striptease by Curtis, which abruptly ends when terrorists burst into the room, as if to remind everyone, “Hey, it’s been, like, a half-hour since we blew shit up, maybe we should get back to blowing shit up?”

There are a lot of things wrong with this sequence. Even if you set aside its obvious misogyny, the second act is incredibly dull. The ending had to be spectacular to overcome all of the momentum lost during the murderous slog in the middle. But, hey, let’s not set aside that pesky misogyny! Jamie Lee Curtis is an actress not normally associated with lack of mental intelligence, and yet True Lies requires her to be even dumber than Tom Arnold’s character, which is basically like asking the audience to imagine her also having Tom Arnold’s physique. Worse, the point of view is curiously misdirected. Our sympathy should be with Curtis, the ignored wife being deceived and mentally abused by her asshole husband. But Cameron tries to put the audience on Schwarzenegger’s side. We’re meant to empathize with this big lug who just wants his wife to say she loves him, while also being encouraged to ogle her. It’s bizarre and fatally tone deaf.

You either tolerate the second act of True Lies or you don’t. You might like this movie in spite of its middle section, but you almost certainly don’t like this movie because of its anti-woman, “can’t live with ’em, can’t kill ’em” interstitial material. Siskel and Ebert were divided on this issue — Siskel voted thumbs-down in spite of enjoying the beginning and ending of the movie, because he found the treatment of Curtis’s character “deadly boring and insulting,” and Ebert voted thumbs-up while conceding that the middle act was “basically cruel and not very funny.” Ebert expanded on this when he wrote about the film, arguing for True Lies (as was his custom) on the grounds that it achieves what it set out to accomplish, singling out the film’s thrilling finale. “It’s stuff like that we go to Arnold Schwarzenegger movies for, and True Lies has a lot of it: Laugh-out-loud moments when the violence is so cartoonish we don’t take it seriously, and yet are amazed at its inventiveness and audacity.”

I can get behind that in principle. But my emotional response to True Lies is closer to Ebert’s reaction to Blue Velvet. In Steve James’s emotional new documentary about Ebert, Life Itself, the director asks the ailing critic about his Blue Velvet pan, quite possibly the most controversial review of his career. Ebert hated Blue Velvet because he felt that David Lynch didn’t respect the personal sacrifices that his actors, particularly Isabella Rossellini, made in service of what Ebert felt was an intermittently powerful but ultimately sophomoric film. “She is degraded, slapped around, humiliated and undressed in front of the camera,” Ebert wrote of Rossellini in his one-star review. “And when you ask an actress to endure those experiences, you should keep your side of the bargain by putting her in an important film.” I think Ebert is wrong about Blue Velvet, but I agree with his reasoning for hating it if I apply it to True Lies, a far less important and infinitely more trivial movie.

It’s not that I can’t see True Lies through the eyes of someone who loves it, because I was that person. Even now, I found Schwarzenegger to be a highly effective presence in this movie, and not just during the action scenes. His charm and light comic touch is bracing; it’s amazing how much he gets done by simply talking, before he inevitably resorts to snapping necks and rattling off an endless supply of rounds. But when viewed retrospectively, you can see why True Lies marked the end of Schwarzenegger’s prime as an action star. Just three years earlier, during the promotional build-up to T2, he appeared in a music video with Guns N’ Roses, the biggest band in the world at the time, and it made sense. In ’94, however, he would’ve looked like a bloated, ironic prop of a bygone era standing next to the bleeding-heart feminists in Pearl Jam. The culture was changing: True Lies was meta, but joking about the silliness of Schwarzenegger movies wasn’t a path to revitalization — it was an embalming.