The Movies of 1994: Pondering the Time-Travel Insanity of JCVD’s ‘Timecop’ 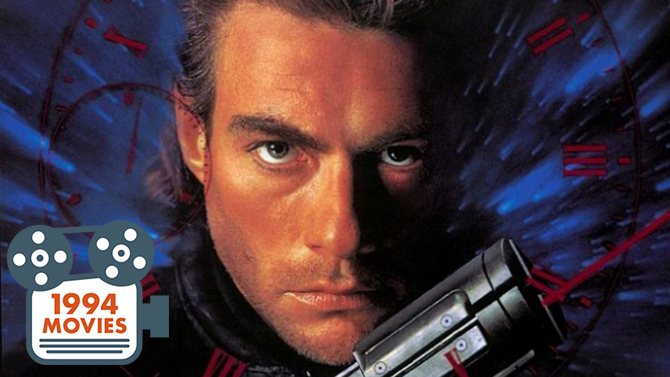 In the year 1994, the movies were great. Greater than usual. Blockbuster or indie, rom-com or action thriller, there was something indelible about so many of them. Throughout 2014, Grantland will look back at some of the most memorable, beloved, and baffling releases of that magical time around their 20th anniversaries. Today: Shea Serrano on Timecop, released September 16, 1994.

Jean-Claude Van Damme’s most financially successful film.1 This is important because money is important. The whole first stanza of JCVD’s career is filled with surprisingly hefty succe$$e$. Starting with 1988’s Bloodsport, Van Damme went 16 films strong before releasing one that didn’t manage to earn back its budget (1997’s Double Team, which cost approximately $30 million to film and brought in less than $12 million). Even Cyborg, which took only $500,000 to make, earned back 2,000 percent more than its production costs, somehow grabbing $10 million from moviegoers’ pockets. Lionheart cost $6 million and brought in more than $24 million. Double Impact cost $16 million and brought in more than $80 million. It goes on and on like that. Still, no film on that list can match Timecop, which has tallied more than $100 million globally. That’s kind of very amazing. And also kind of why it will always be a JCVD movie you have to mention when you talk about JCVD movies.

More relevant than that, at least for the purposes of this column, Timecop is also:

Van Damme has starred in no fewer than four movies in which the plot was essentially “Van Damme has to fight some dudes to win a fight thing for a reason he has” (Bloodsport, Kickboxer, Lionheart, The Quest). In Timecop, however, JCVD plays Max Walker, husband to a murdered wife and employee of a secret government agency called the Time Enforcement Commission. The TEC is in charge of policing time travel, a thing that is possible but also a thing that appears to be exclusive to something like five people on the planet, all of whom know each other and work in buildings that are not that far apart.

And despite having the ability to do so, JCVD, broken and bitter and incomplete, is not allowed to travel back to prevent his wife’s death because of the risk that doing so could have unknown side effects on the present day. The only person he’s ever loved is dead, and he absolutely has the ability to reverse it, but he absolutely cannot. And so he bounces around time and space, karate-kicking people and silently crying and sometimes openly crying instead. That’s his existence. It is 1,000 leagues deeper than anything else from his filmography.

Time travel is always a ridiculous notion, and it’s even more troublesome to write about, so please just look at this infographic and you will know all of the times that time travel occurred in Timecop (that we are shown) and the reason for each occurrence. It’s important for the next part of this story: 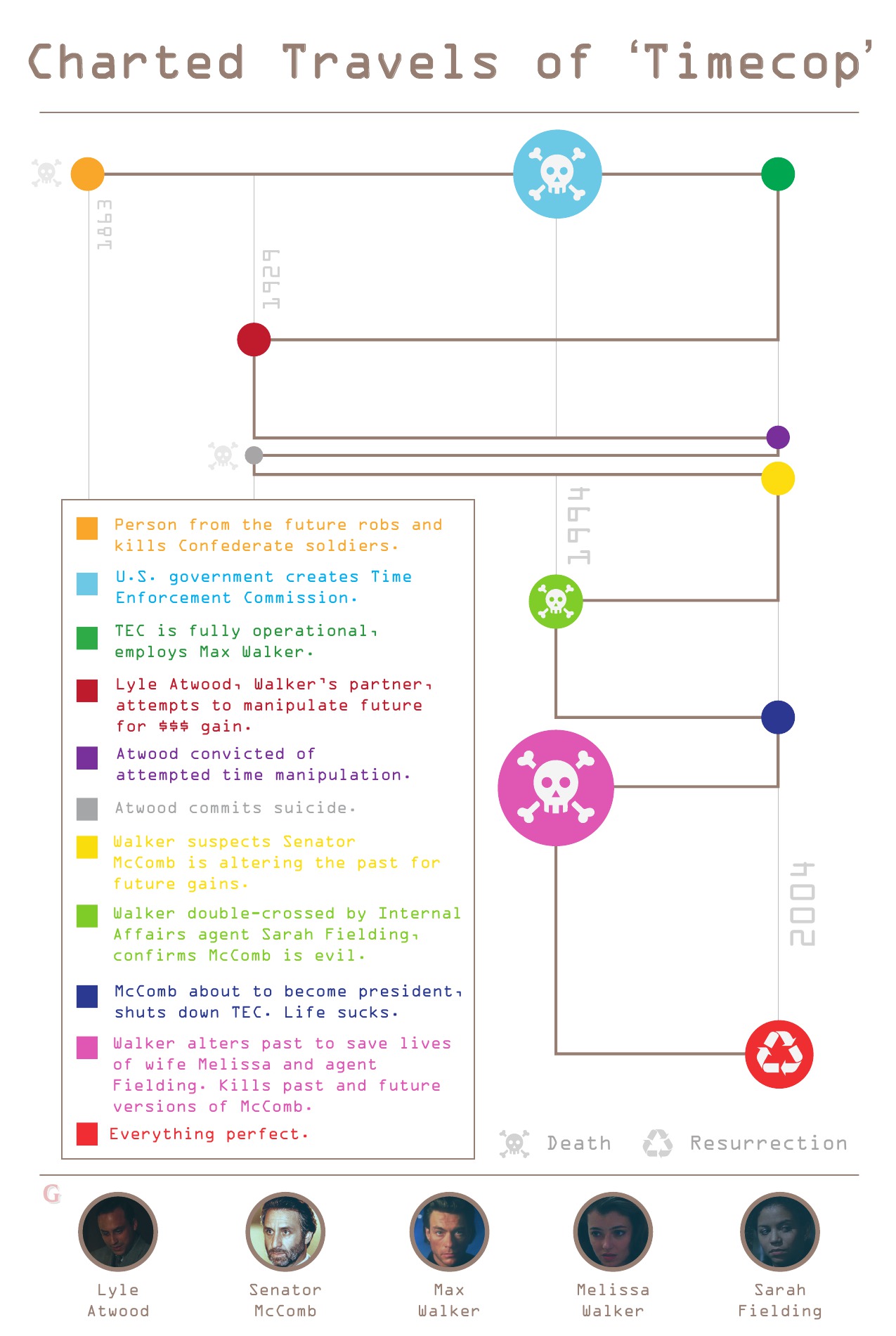 The first time-travel scene, which is how the movie opens, is the impetus, establishing that time travel is a reality and that the past is no longer static. And that’s how we eventually get to JCVD, who spends the bulk of his time bouncing back and forth through time from 1994 (when his wife was murdered) to 2004 (the movie’s present day). He does so because he is trying to catch Senator McComb, a bad-guy politician who is manipulating the past so he can wiggle himself into the presidency in a forthcoming election. It should all be convoluted knots of ideas and paths of reality, as time travel tends to be. But it isn’t. Because Timecop did not aspire to explain time travel, which would be stupid and impossible. Instead, it sidestepped the mechanics of it almost entirely, to a degree that we know that time travel exists only because a man in a suit walks into a room to tell other men in suits that a person has figured out how to do it and that he, the first man in a suit, would like the other men in suits to control the aftereffects. There are only three things we’re ever told about time travel in Timecop:

1. You cannot travel into the future because the future has not happened yet. This is a great idea. Trying to pin down the eventualities of everything in the cosmos is the dumbest thing, so why even try? You can only go backward because backward is concrete, until you arrive there and it becomes entirely flexible. That’s it. That’s the first rule.

2. If you travel back, you can look at yourself, and even talk to yourself, but you cannot touch yourself because “the same matter cannot occupy the same space” at the same time. It’s a sentence they repeat a few times over the course of the movie, which is how you know that that’s exactly how McComb is going to die.

So that’s the second rule. Don’t do that.

3. Stuff you change in the past affects things in the present day. Duh. Come on. Duh. That’s the third rule. That’s always a rule.

Because without ever really explaining that he’s realized it, JCVD begins operating under the premise that his wife’s murder was a time-travel crime committed by Future Senator McComb’s hooligans, which means that a version of Future McComb has already played out the string of reality JCVD is operating in, which nullifies the rule about JCVD not being able to change the past to save her, because technically he’s not changing the past — he’s correcting the past after an unlawful time-travel change was made to prevent the proper future-reality from coming to be. So here’s what the new infographic looks like: 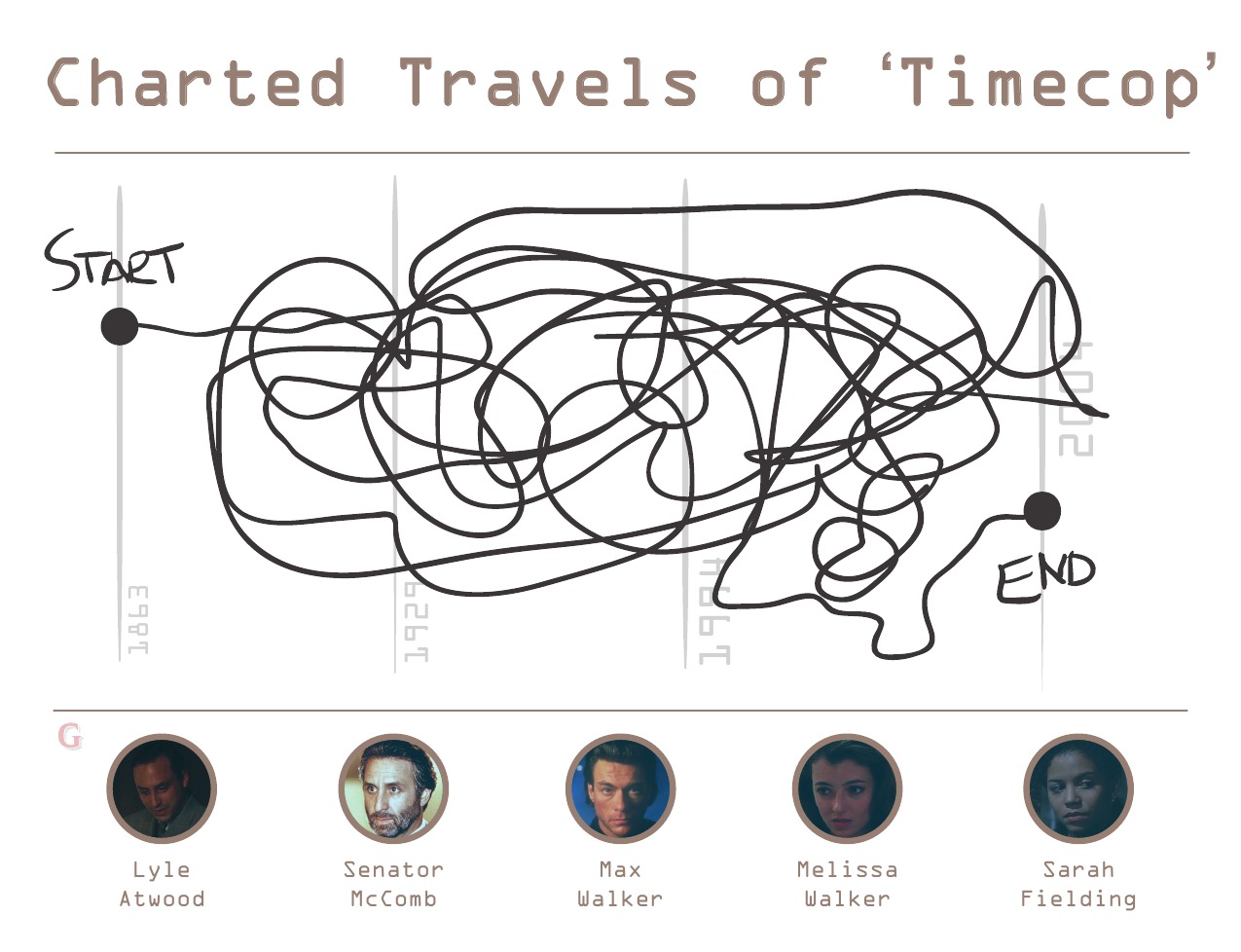 Time folded over onto itself so that dual realities were occurring in the final 20 minutes, and JCVD was the only one who realized it.

Because he’s a timecop, bro. And that’s what timecops do. I think? I don’t know.

Also, he does this:

It Ain’t Over Till It’s Over: The Pseudo-Endlessness of ‘Destiny’