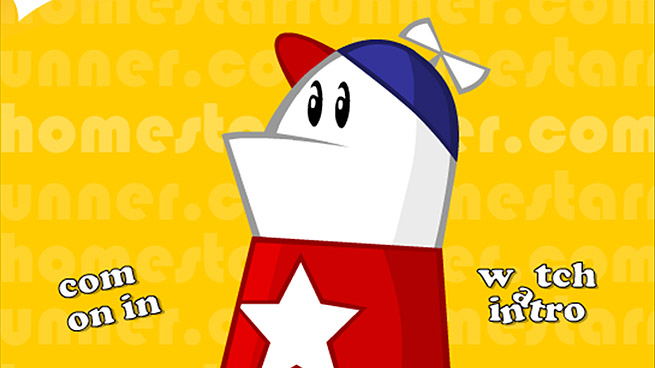 Now that the Internet has killed April Fools’ Day, it’s nice to know you can cruise down the information superhighway on all April 1’s from here to eternity and be pretty safe, as long as you don’t believe anything any online entity tells you, no matter how legit. (Top Gun 2? Puh-lease. Full Miley boob? I’ll believe it when I see it!) But now, we face a real conundrum: a glimmer of hope that the long-dormant pre-social-media meme generator Homestar Runner could be back in business, thanks to the first update in about four years to its still charmingly Flash-based dotcom. Do we let ourselves believe in a world of Teen Girl Squads and Marshies without end, as unlikely as that seems? My heart says yes, but my calendar says no!

The update is really just an extended new intro animation, beginning with a sad, dilapidated-looking splash page (your code’s showing, Brothers Chaps) in which Homestar, later joined by Strong Bad, tries to give the toon-starved masses what they want via a “Hairstyle Runner” retrospective and another spin for old time’s sake of the ol’ Strong Bad EeeeeeeeeeeeeWindows98DesktopTheme! It’s all as stream-of-consciousness and absurdist as ever, and even rewards your attention with a highly desirable freebie: not one, but two of the aforementioned antiquated-operating-system desktop themes! I’m all Mac’d up these days, but downloaded them anyway; who knows when those WAVs will come in handy?

Homestar Runner: more than a decade later and still summing up the Internet experience better than anyone else in the game.

Alas, this all hardly seems like a reboot announcement (Homestar and Strong Bad estimate the next update will come in approximately five years; fingers crossed our browsers still support it by then), but if you’re still hungry for more HSR, there’s always the Daft Punk–Strong Bad collaboration Random Access Fhqwhgads, which if nothing else, wins points for commitment. Everybody to the limit, indeed.