Explaining the Dogecoin-Funded Efforts to Send the Jamaican Bobsled Team to Sochi: A Thought Experiment 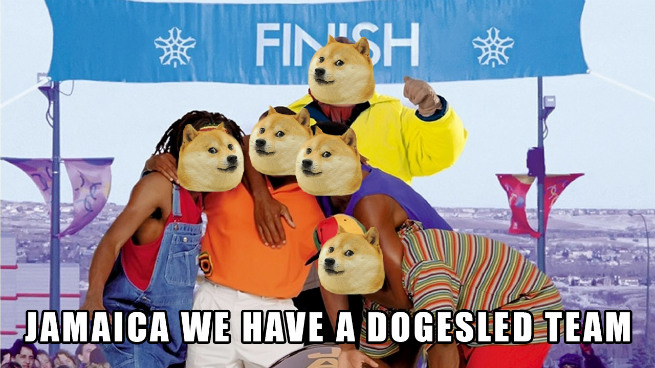 I just got back from the best vacation. I hopped into my time machine and speed-dialed the year 1996. I had a great time. It’s really beautiful there: much fashion, very Oasis. After exploring for a while, I broke into a college dormitory and made some new friends. We popped in a VHS of Cool Runnings, threw back a couple of Smirnoff Ices, and relaxed. I didn’t want to ruin the mood by disclosing that I had come from the future, but I was tipsy, so I asked what the crowd thought of the Dogecoin-funded efforts to send the Jamaican bobsled team to the Sochi Olympics.

“First,” said a sophomore with a bong between his knees, “what’s a doge?”

God, this evening in the past century was going to last forever. “Obviously, a doge is a Shiba Inu, usually blonde, pictured under floating text that says, you know, ‘wow’ and ‘so bigotry’. Haven’t you ever seen Homestar Runner?” Crickets. “Remind me later to help you with your Oscar pool, by the way.”

“So you’re saying that the doge is the currency of the future?” This one was harder to answer: no, but also yes. As I explained about cryptocurrency and its diversification after the Silk Road scandal, I could feel that I was losing my audience.

“Basically, Dogecoin is having a moment back where I come from. At least this week. Who doesn’t want cute money? Don’t you ever think intangible money should be cuter? Anyway, I only brought it up because the Jamaican bobsled team has qualified for the 2014 Olympics in Russia and they’ve raised anywhere from $30,000 (according to BuzzFeed) to more than $90,000 (according to Mashable), largely because of Dogecoins. And Dogecoin has profited too: The campaign raised its exchange rate.”

“I still don’t understand,” said someone on a lofted bed. “I thought Shiba Inus were known to be the assholes of the spitz breeds. Why use them to advertise for an Olympic bobsled team?”

“Because of the puppy cam, and the way they effortlessly give you side-eye,” I said, but nobody knew what I was talking about. I sighed and hit the bong: It doesn’t count when you time-travel. “Look, you guys, Cool Runnings really stands the test of time. Add attitudinous dogs and Comic Sans and you’ve got the American dream in the palm of your hand. When a Dogecoin higher-up named Liam Butler was a kid, he used to kick it with his best friend and shout out the catch phrase from the movie: ‘Feel the rhythm, feel the rhyme, get on up, it’s bobsled time!’ A fundraiser began. It went viral.” A beat. “That’s good. You know, for the bobsled team. They didn’t die of it or anything.”

“But why can’t the team afford to go?” asked the sophomore. “You’d think they’d have gained a lot of momentum, so to speak, from that three-year-old hit film we just watched on tape.”

“Well,” I replied, “there are only two of them: Winston Watts, who’s 46, and Marvin Dixon. Five if you count the backup, coach, and mission chief. They haven’t competed in the Games since 2002, and they’ve been paying for training out of pocket. Underdog stories really appeal to future Reddit — sorry, Internet forum — users, who also have an ingrained affinity for ’90s nostalgia.”

“But isn’t the Internet kind of anonymous and inconsequential?” a voice asked from the upper bunk. “Who can even tie up the phone that long on AOL without their parents having a cow?”

“Not really,” I said calmly. “It’s different. After a couple of days of crowd-sourced fundraising, the Jamaica Olympic Association agreed to cover the team’s travel costs. It was kind of heartwarming, actually. You guys spend way too much time outside.”

“It sounds stupid,” responded my cranky friend in the bunk, “like a bad sequel. I hope remakes and sequels aren’t a big thing in 2014.”

“Dude, we’re listening to Jimmy Cliff cover Johnny Nash right now,” I pointed out, because we were. “You don’t even know what you want. You lack fact-checking abilities. Your opinion exists in a vacuum; you have no way to verify if you’re right or even interesting. The good news is that the future affords us the capability to channel all of our emotional investments into action. You get the right chemistry together — an interactive narrative, a recognizable visual in the form of a sleek-coated canine with coyly bared teeth, a vapor-distilled memory of your favorite childhood movie — and you can help form this weird cultural phenomenon that will last for 10 seconds and inspire about 200 think pieces on a Jamaican bobsled team. It’s tremendously empowering.”

“I have no idea what a think piece is,” said the sophomore. Oh, I could have stayed forever! But I realized deep in my evolved, futuristic gut that I couldn’t conform to their world, because I knew too much: such delishus, very poltics, hidden truasre. I no longer spoke the language of this illiterate ancient people. I waited until they fell asleep, ate the remainder of their box of French Toast Crunch (still miss you, FTC), and split. I didn’t want to inadvertently be the bearer of bad news. It was better that these poor souls hang on to the most optimistic vision of the future: Shiba coins, unstable yet existent, and Jamaica’s return to the bobsled. Next time I’m going to introduce the 9th century to Koi Pond on my iPad and become their fearless leader, She Who Summons Fishes. Wish me luck.