iWinks, the Internet Startup That Wants to Help You Incept Yourself 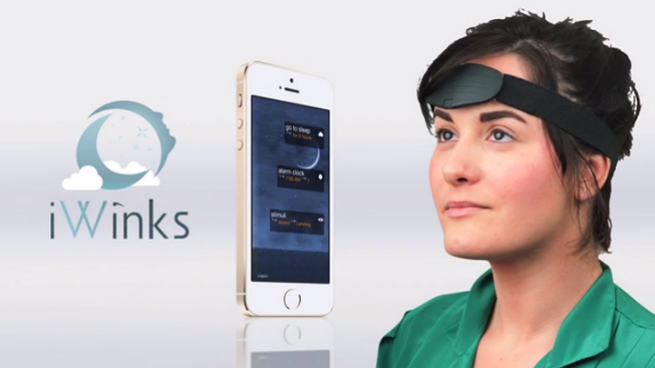 Using the Internet can be a lot like dreaming. You navigate a world that’s both fantastical and realistic; you are active while remaining mostly physically inert; you block out external stimuli and direct your avatar to various intangible locations, improvising the route as you go. You have no body. Your journey is personal and doesn’t necessarily translate into interesting conversation. Many of our clicks stem from the impulses in our latent minds, just like they do when we dream.

Lucid dreaming is the most prime sleepy real estate: You’re aware that you’re in a dream, but you’re still in it. You know, in it. That means that you can, theoretically, control what you do and certain elements of your surroundings, which is great if you want to try astral traveling but you don’t want to invest in crystals from your local psychic. You can enter into a lucid dreaming phase either by noticing something strange in your surroundings — that you’re talking to a ghost, that you’re painlessly yanking out all of your teeth, or that your hands have turned into balloons — or, less frequently, when you enter REM sleep immediately after falling asleep. It can also happen for no reason at all: You just realize you’re in a dream without a clue to tip you off. If you’re still not tempted, a website dedicated to lucid dreaming, the Lucidity Institute, has some hooks for you: You can fly and have great sex (maybe at the same time, if that’s your thing), receive nightmare therapy, practice real-life skills (“neuronal patterns of activation required for a skill [like a ski jump or pirouette] can be established in the dream state in preparation for performance in the waking world”), strengthen your creative impulses, improve your health (I’m a little skeptical of this one, but I’ll go with it), and probe the constraints of physical reality (“not only does lucid dreaming lead to questioning the nature of reality, but for many it also has been a source of transcendent experience”). Ecstasy ensues. Everyone wins.

With all of the sleep-tracking devices kicking around the marketplace, it was only a matter of time before we decided to take sleep diagnostics to the next level. Back in 2012, Forbes published an article about a software engineer who wanted to use lucid dreaming as the bridge between waking and sleeping interactions, creating an “open protocol experiment” that used software and headgear to send cues from user to user so that they could communicate over the Internet while they slept. You could “ping” another user via a colored light cue, then send an eyeball-signal that would show up in the other person’s dream. In the Forbes piece, this appeared to one person as an Exit sign in a theater, and to another as a light flare seen from a cruise ship.

That’s very poetic in an Eternal Sunshine of the Spotless Mind kind of way, but even in 2012 there was something clunky about the technology. Even saying “hi” in a lucid dream was challenging, and required practice and an REM detection mask. Yesterday, the iWinks team (responsible for the Kickstarted lucid-dreaming tool the Aurora headband) hosted a Reddit AMA about lucid dreaming and technology. Aurora’s Kickstarter doubled its initial goal of $90,000 by touting its ability to measure your brain waves and eye movements, and offering tools to “help direct [your] dream experience” with sounds from your music library. You can hang out on “the beach with seagull and wave sounds over a pulsating blue ocean”! You can Pinterest while you snooze!

So, what did we learn from the AMA? For starters, there’s a “smart alarm clock” feature in the complementary app that chooses a period of light sleep to wake you up within a designated window. The developers also explained what they mean when they refer to a “dreamsign”: This is a personalized notification that alerts you to the fact that you’re dreaming, without (hopefully) waking you up. (An example provided in the AMA was a recording of your own voice telling you that you’re dreaming.) Lucid dreaming isn’t easy, so the developers are relying on user feedback to improve their success rate; after all, an alert meant to summon lucid dreaming could just result in you waking up in the middle of the night, startled and cranky.

What if you want to get freaky with your dream app? Well, you could “create super detailed trippy light shows as well as set the sound cue’s level. You can use any recorded sound you want!” Awesome, I’m going to Skrillex TONIGHT! The developers also debunked the social capabilities of lucid dreaming, via Inception of course: “The movie Inception did a great job of sparking general interest in lucid dreaming, and while it got a few things right, it also perpetuated several rather sensational ideas about dreaming. ‘Dream sharing’ as depicted in the movie would require BCI technology drastically more advanced than anything we have today and if such technology ever came about we’d be able to do a lot more than share dreams. :).” I assume there’s a smiley face at the end of that sentence to counter the fact that that hypothetical situation is simply terrifying. :)

There’s also discussion of “reality checks,” something lucid-dreamophiles have to practice in waking life. It’s probably also handy if you’re given to fits of depersonalization: You take stock of what you see and how you are, and whether your fingers pass through your palm when you press them into it or if you see your own reflection normally in a mirror. The iWinks folks call this “the hardest first step” for a reason, because it means ceasing to take for granted the fact that you’re awake and everything is as it should be. They also suggest “dream journalling [sic],” which can be aided by configuring the smart alarm app to wake you up following an REM sleep sequence.

iWinks embraces open-source technology to enable the “hacker community … to explore the awesome power of the brain.” But it also faces skeptics, which is understandable, considering the fact that the science of lucid dreaming is murky: Some evidence suggests it’s actually just a short period of wakefulness. There was also the canceled Kickstarter campaign of the Luci device, a lucid-dreaming inducer that was labeled a fraud in November. One AMA commenter pointed out that iWinks had failed to produce its promised preliminary test results on its Kickstarter page. Soon after, iWinks posted an update in its FAQ detailing a 12-day study with a four-person group. The test subjects were all men in their late twenties, and each night one of the four wore the Aurora headband to sleep, with half of the nights set in active mode and half in control mode. The control group didn’t recall any lucid dreams, but 50 percent of the treatment group did. Still, with such a small study, does that really mean anything? iWinks is quick to point out that they “want [the backers] to be our next test group so that we can learn what works best for everyone.”

As an investor, you have to put a lot of faith in a project to enlist yourself as its guinea pig, but lucid dreaming is also a natural focal point for anyone interested in the confluence of science, technology, and imagination. It’s easy enough to figure out you’re sleep-deprived without wearing a dorky headband; the larger question is how to manipulate a dreamscape into something that’s useful and enriching during the day — if such a thing is possible, which it might not be — and to take advantage of the uncharted territory to imagine the different ways we might experience and interact with our subconscious fantasies. Have we arrived at the point where that becomes a reality? Dream on.

Filed Under: The Internet

Miley Cyrus's Aching Heart ... and Other Sob Stories From This Week's Tabloids

Q&A: Real Estate's Martin Courtney on His Band's New Album and Being Stuck on the '70s