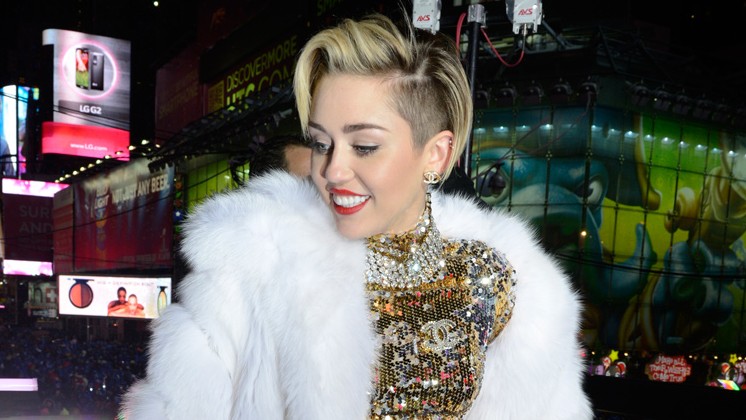 Miley Cyrus Wonders “Will Anyone Ever Love Me?” Aw, girl. I love you! “After hunky Kellan Lutz publicly disses her, Miley Cyrus is left wondering why she can’t hold onto a man.” She and former Twilight star Lutz flew to the Bahamas on a private jet. “Heartbroken after her painful split from Liam Hemsworth, Miley was eager to find love again.” Lutz wasn’t looking for a new romance. Lutz “was quick to set the record straight, dashing Miley’s hopes of finding love yet again.” Or maybe they were friends with benefits. Lutz told Ryan Seacrest “Are we dating? No, it just makes me laugh.” Ha ha. I am laughing. Look at me laugh. Lo lo lo. “Kellan’s just not that attracted to her and says she’s not what he wants in a girlfriend. He knows she has major issues. He thinks she’s kind of gross.” Pshhhhhhh. Now we’re going to shame Miley for being “gross”? Let her live. It’s just a tongue, y’all! “It’s sad that she doesn’t understand why she’s scaring men off.” Oh fuck off. “Miley has absolutely no self-awareness; she doesn’t see herself the way guys do. She’d love to be in a relationship.” Maybe she just needs a dude who is more chill. “She comes across as a man-eater and men are intimidated by her out-of-control behavior. She flaunts her sexuality to get attention and that makes a man feel like he can’t up.” So maybe she needs a chill guy who can keep up. Patti Stanger chimes in, “Serious guys don’t like someone who’s constantly seeking attention. Guys like a little mystery. Less is more.” Which is why she has a show on Bravo called Millionaire Matchmaker. At a nightclub in Miami, Miley “started dancing provocatively with a guy who was totally uninterested in her. He said it was like having a little boy hopped up on Adderall grinding on him. He thought it was nasty.” She was dancing, dog! “The saddest part of all: Behind the crazy façade is an insecure young woman who just longs to be loved.” What’s so sad about having a crazy façade? She’s a pop star. “Miley wants nothing more than to have sometime who’s there for her when she needs them. She gets lonely and needs a lot of attention.” Well, why blame that on her? “Guys think she’s fun to hook up with, but when it comes to a relationship, she’s not even on their radar.” Kellan Lutz “likes a girlie-girl who’s down-to-earth and feminine. Miley’s more like one of the guys.” Heaven forbid a woman not be feminine! “Experts say men feel threatened by a woman who flaunts her sexuality to get attention.” Experts can suck my dickkkkkkkkk.

Olivia Wilde on Being Pregnant: “I’ve never had boobs before!”

Jennifer Lawrence & Nicholas Hoult: They are back together and proved it by “cozying up, taking selfies and sharing a sweet kiss” at the Golden Globes. I love any couple who met while filming an X-Men movie.

Taylor Swift Dances Alone: She went to a Golden Globes after-party with Jaime King (no relation to Ja’mie) and Hailee Steinfeld, but “the group of gals couldn’t keep up with the singer’s energy and ditched her, leaving Taylor to cut a rug on the dance floor solo.”

Mama’s Boys Leonardo & Bradley: “Who needs supermodels!” Leonardo DiCaprio and Bradley Cooper brought their moms as their dates to the Globes. “Apparently the sit-down dinner wasn’t enough for Leo: He requested sushi from Katsuya restaurant and had chopsticks in hand before the food arrived.” Man, I love Leo lately. He loosened up!

URRRSHERRRR: “Has Usher lost his swagger? He was turned down by several hot girls at Diddy’s 1Oak party!” NEVER!

Amy Adams: Adams “was overheard complaining about the food during the awards ceremony.” Nobody eats the food! They just drink a lot.

Pamela Anderson & Rick Salomon: They remarried! She has a great new Jean Seberg haircut and he’s the ex-husband of Shannen Doherty who was in the Paris Hilton sex tape.

Misc/Etc: “a nutrition bar in her purse” “The Jeopardy host, 73, showed a flair for spitting lyrics” “there was some shrinkage” “blew smoke rings from an e-cig” “wiggled and giggled” “The first request on the production end was pictures of my penis.” “helped clean a cut on her foot with, yes, his mouth” “let her curves do the talking” “She looked pretty and very confident” “adding a jester to his forearm” “tossed around a frisbee while visiting paradise” “Thank the lord for my husband” “The ultimate girlie girl” “what the singer described as ‘cherry red’ on the bottom” “got the most waist-whittling power out of the trend” “This bombshell look was deliberate” “I hated my growing stomach and thought I couldn’t get any bigger” “I feel like it chopped my balls off” “partying with the street drug ‘molly’” “poses provocatively with monkeys” “TRYING TO BUY HAPPINESS”

Juan Pablo Has a Wandering Eye: Then why would he go on a show where lots of women compete for his attention ohhhh. His exes tell all. “He’s a playboy!” He has a “reputation in South Florida as a ladykiller.” He dates a lot of women “but he never settles down. He dates a woman and then moves on to another one. He’s usually seeing someone. Juan Pablo is very fickle.” He’s “so smooth” says another ex. Most of the “women who dated him still really like him.” He’s just that good. He is “stubborn” and “likes a girl who will follow him around” but is also “a total gentleman.”

Kristen Bell: “I got to the slopes last year … and I thought, Oh my God, what are we doing? … Like, what are we trying to prove to snow? That we can ride it?”

The Queen Hates Potatoes: “Spuds aren’t on the queen’s menu. They’re never served when she dines alone.” She also doesn’t care for soup and is “fiercely protective of her beloved corgis.” Of course she is. They’re her beloved corgis!

Misc/Etc: “simply weren’t Mr. And Mrs. material” “Stay out of the sun” “No Sonic Youth then?” “she despises dissonance in her tunes” “She’s served ball-shape ice in her cold drinks, says the former aide, because they make less noise” “being oh so cool at 13” “I don’t want to have to wear muumuus!” “it felt like liquid on me!” “The McConaugheys Mix & Mingle” “I just have fun!” “They are kids at heart” “she thinks he’s super hot” “He makes concessions he wouldn’t have in the past” “Bad Egg” “I Want To Be A PREGNANT BRIDE!” “The Bling Ring!” “From wallflower to wow!” “was once engaged to Sean Penn” “Maybe someone should meet a normal guy”

Claire Danes Is Method: “She’s very emotional and can be incredibly difficult. If she’s stressed, she goes into her ‘howling room’ and screams.” I wish this were true though.

Chris Pratt Was a Stripper: “I wasn’t an actual stripper. Okay yes I was! The whole thing was awkward. Give me a break. I was exploring my creative side!”

Andy Samberg’s Globes Regret: “I forgot to thank my freaking parents! Looks like I just lost my invite to Thanksgiving next year!”

Misc/Etc: “spotted her looking sulky and depressed, chain-smoking cigarettes in a corner of the hotel lobby” “He had a hard time complimenting her” “She was dancing very sexually while looking into Leo’s eyes” “crystalline waters are filled with sharks, razor-sharp coral” “Anne had been lying on the beach drinking three or four Bud Lights, and since she’s such a thin girl, I’m sure she was feeling a buzz” “She feels she’s so deep and everyone else is just shallow and oversexed. But she’s obsessed with her looks, always fussing with her hair and eyeliner – she’s a total hypocrite!” “got an earful from U2 frontman Bono” “she can’t wait to be pregnant again in the near future” “Bust a move, CiCi!” “the 1st Annual Flo Rida Youth Snooper Bowl” “likes skinny women with large breasts” “It was always strictly a booty call. She was dying to be his girlfriend, but he was just having fun.” “refuses to wear ‘cheap’ clothes” “It doesn’t go with my aesthetic”

Jennifer Lawrence: She celebrated her Globe win by “catching up on my drinking.”

Cate Blanchett: “There’s a lot of effort that goes into making it look effortless.”

Courtney Love & Aaron Sorkin: “When Courtney likes someone, she becomes obsessed and does not let it go.” Fate-Hole Attraction!

Misc/Etc: “GISELE HAS CELLULITE?!” “wants to work in his bakery and open bakeries” “DON’T LIKE ME NUDE? TOO BAD!” “A new digital currency similar to Bitcoin” “This anachronistic behavior has to stop!” “She was having a blast with her girlfriends!” “a close encounter with a pair of hedgehogs” “getting swallowed by a ginormous ruffle!” “looks like a slicked-back wet dog” “the honeymoon phase was over and they realized they had little in common” “I BORROWED FROM A BUMBLEBEE” “I let them out in society” “We have a duck quesadilla!” “it’s like we’ve merged into a single inseparable person” “A couple of pelvic thrusts!” “EVEN PICTURE-PERFECT STARS GET CELLULITE” “she ought to be buzzing around a beehive in this fuzzy fur” “14-YEAR-OLD BODYBUILDER: I’m Not Too Young To Pump Iron!” “I like going to the mall” “During the offseason for competitions, I’ll have some pizza. I do miss Taco Bell.” “He’s got the drive and the heart.” “The polar vortex was too cold for a polar bear!” “Zorro has a strong personality, just like Kim Kardashian’s noncomformist fiancé.”

iWinks, the Internet Startup That Wants to Help You Incept Yourself