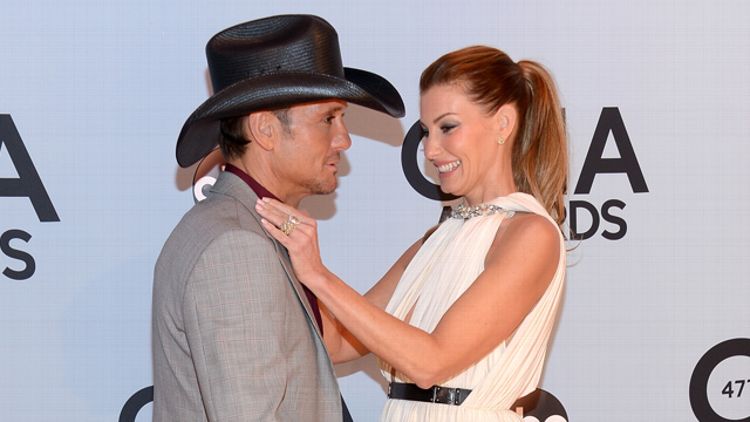 Faith Hill and Tim McGraw Separate: Behind the scenes of their Soul2Soul tour lurks a whole different story. “Faith and Tim can portray themselves as the happiest couple around, but that’s really far from the truth. It’s been years since they’ve truly been happy in their relationship. And at this point in their lives, their marriage is not a loving or healthy one.” They’ve been married for 17 years and are both 46. “When Tim’s on the road alone, he travels with a gorgeous 24-year-old private massage therapist who used to be a fitness model.” Oh. Faith should hire one too? The couple have claimed there are no problems, but they’ve been quietly selling off their long list of homes. Tim was rumored to be romancing Gwyneth Paltrow and then Taylor Swift. Faith developed a close friendship with Kevin Costner, and may have broken up Alan Jackson and his wife back in the day. “There’s so much mistrust between Faith and Tim, their friends feel it’s almost impossible that there hasn’t been any cheating going on.” They have three daughters together, all teens. The pair are leaking money, but they keep making extravagant purchases anyway. They’ve been replaced as the royal couple of country in the public eye by Blake Shelton and Miranda Lambert. Since “their marriage is taking a toll on them to this degree, perhaps they really should call it quits just to save their health — and sanity.”

Who Bought the Jay Z for Barneys Stuff? Gwyneth Paltrow — but of course, darlings! “The actress is so obsessed with the rapper’s holiday gifts collection for Barneys New York, she dropped nearly $100,000 on the goods during one shopping trip alone!” Flawless! “Gwyneth loves Jay Z and she loves his taste. She’s giving lots of people on her holiday list something from the collection.” That includes items like “$5,000 cashmere blankets, $4,000 leather bags and $1,000 leather-accented T-shirts!” In response to claims that Barneys racially profiles, the collection’s proceeds are now going to charity. Well, I guess that’s slightly better?

Justin Theroux Loves to Dumpster Dive: So he’s thrifty! That’s cool. “Jen, 44, is ’embarrassed’ by his hobby and tells him they have more than enough money to decorate.” It’s not about money, maaaaaaaan. “Justin’s recent finds include a discarded Darth Vader helmet and a rusted bedpan to use as a planer.”

January Jones: “Let’s hope January Jones’ son doesn’t inherit his mother’s penchant for surly looks!” Um, why? That is one of her greatest qualities. Her surly face is unparalleled and a big reason that Betty Draper is amazing.

Khloe Kardashian and Matt Kemp: Separated from Lamar Odom, Khloe has been dating Matt Kemp on the down-low. Seriously? Matt Kemp? I’m not surprised so much as impressed. He dated Rihanna! “He treats her like a princess.” Cool?

Misc/Etc: “And now he’s in the wind” “definitely still wearing her engagement ring and can’t wait to be married” “She’ll spend Christmas with the Rwandan president, an accused war criminal” “very open about freezing her eggs” “She keeps telling her friends not to be surprised if she’s married with a baby by next Christmas!” “She flipped out over $3!” “she’s dying to get another face-lift” “Maybe she should start taking the bus!” “has never been the pillar of poise” “Misogynist classist white colonial fucks” “his fantasy femme fatale partners” “sexy tango with future lover” “Trophy Daughter” “The pretty pair snapped a few selfies” “the former model, 29”

Megan Fox: “I only use black Sharpies. I’m very particular about how my handwriting looks.”

Zoe Saldana Gets Mistaken for Kerry Washington: “I’ll have people go … ‘Oh my God, your show on TV is amazing, Ms. Washington.’ It humbles you.”

How Katy Perry Dealt With Divorce: “I was, like, just eating Flamin’ Hot Cheetos and drinking, and that’s it.” Sounds like a pretty solid plan.

Misc/Etc: “Don’t make racist remarks” “Had a lot of layers” “If you’re prone to breakouts, don’t try it!” “I’ve been watching a lot of reality TV, and those shows have a lot of New Jersey women” “Do I walk down the carpet twice in two outfits? Wouldn’t that be funny?” “She won most of the fights in the movie, which was a pretty good predictor of what would happen down the road.” “Cuteness Rain Or Shine!” “They Juggle Heavy Loads!” “Just to post more pixxxx like this” “Emma Thompson fed a porcupine” “painting my prego belly” “They made out all over the party!” “She has always been envious of other girls who had sisters” “Beyonce’s salad” “Fake a Glow Like LO-FI” “Enhance Features Like AMARO” “Blur Imperfections Like TOASTER” “She must really love playing Tetris”

Jennifer Aniston Is a Sucker for Friends: “I actually will always stop and watch.” You and everyone else, Jen. Man, those Thanksgiving episodes are so good.

Demi Lovato: “I couldn’t go 30 minutes to an hour without cocaine. I would bring it on airplanes and sneak into the bathroom to do it, even when I had a sober companion with me.” She “hid her problems from everyone in her life” until she realized she was probably going to die from a drug overdose if she didn’t confess.

Lady Gaga’s Ex: “She’ll Never Marry”: According to her ex-boyfriend Rob Fusari, Gaga and Taylor Kinney will never make it down the aisle. “Her music will always be No. 1 in her life. Marriage will always be No. 2. A husband, kids and a white picket fence just aren’t for Gaga.” What about an LED octopus tentacle fence?

Misc/Etc: “Keep your hair high!” “White heels after Labor Day?” “Don’t talk to me today unless it’s about Beyonce” “I love to watch pimple-popping videos. It’s nasty, but it’s really funny.” “I had all the help in the world but I didn’t want it” “a steam shower big enough for six” “Cameron can gaze at the Empire State Building from her master bedroom” “calling his fiancee Kim Kardashian a short overweight hobbit” “Aren’t we attractive enough women as we are?” “PREGNANT AND ARRESTED” “Big Bird, you don’t know you’re beautiful!” “the two Carrie Bradshaws met for the first time at the Cosmo 100 lunch.” “I’ve got to be a little bit naughty” “Why the sour face, Kristen Stewart? Is it because your stylist chose orange wide-leg leather pants, then took the look from scary to sloppy by tying a shirt at the waist?” “white patent boots had their 15 minutes in the disco era”

Jennifer Lawrence on American Hustle Hairdos: “I really loved Bradley [Cooper] in curlers. That made my morning every day. That was better than coffee.”

Ian Ziering Did Sharknado at His Wife’s Request: “My wife said ‘You’re going to have two babies — you need to go work!'”

Cate Blanchett: “No one … can ‘have it all.’ There just isn’t enough time. I think the concept puts incredible pressure on people.” Yup.

Lady Gaga: “She paired a new green ‘do with pale skin and red lips for a look that was eerily reminiscent of The Joker.” Because she’s the clown princess of pop!

Taryn Manning: “I never thought I’d own my own house. I grew up really, really poor — it taught me a lot.” You were so great in Crossroads (and on Orange Is the New Black).

Misc/Etc: “Sometimes Youth Does Trump Experience” “MY DIET IS BETTER THAN LIPO!” “She’s finally popped!” “dripping sex appeal” “A glam job, a hot husband” “Guests munched on crispy duck salad and sipped D’usse Cognac, but Jay abstained” “she tried to sneak under the velvet rope” “she couldn’t take her hands off her tummy” “She donned a wedding gown for a photo shoot, not another trip down the aisle” “TAYLOR SWIFT celebrated her 24th birthday with singer LORDE” “Where’d his stripper abs go? There was a little more of Channing Tatum to love” “I’ve been dying my hair since I was 15” “Scott Disick sat back in a comfy chair and listened to jazz” “He’s a mess” “really sweet, then goes insane and parties” “In the plastic surgery world, chins are the new breasts!” “wear dresses up to my coochie”