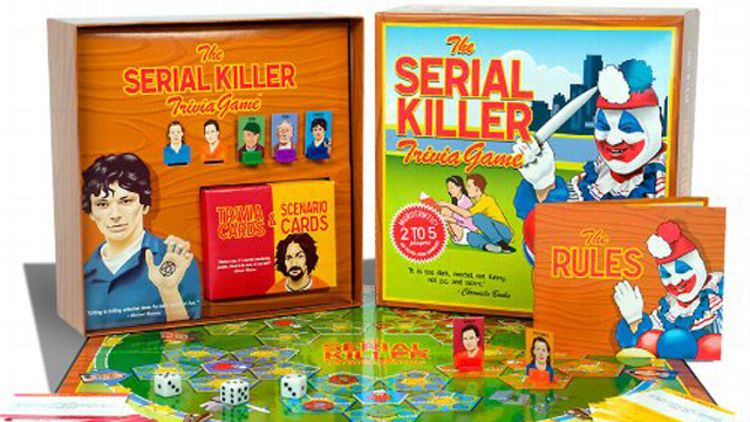 If you celebrate Christmas, you’re probably deep in the throes of online shopping right now. Perhaps you’re looking for gift ideas for your loved ones. That’s dandy. Here’s some inspiration, and here’s some more. (Shameless plug!) Now you know. But what don’t you know? You don’t know what you absolutely, positively shouldn’t buy someone for Christmas. That’s why I’m here to tell you: Skip the murderabilia aisle.

What is murderabilia? It’s a word given to collectible items used, owned, or created by murderers or violent criminals. It’s skeevy and expensive — George Zimmerman’s Shutterstock-inspired painting, which is probably only considered murderabilia-adjacent because of his acquittal, has a current bid of over $100,000 on eBay. It’s not the kind of stuff you’re likely to find in brick-and-mortar establishments (though these items do show up occasionally at auction houses), so it has become almost exclusive to the Internet marketplace. An added benefit of its virtual existence is that no one can watch you exchange $5,000 for Ted Bundy’s Christmas card, though Santa probably knows what’s up with your PayPal anyway, and judges you. Ho, ho, hmmm.

Of course, everyone has the right to be a weirdo, and we’re all weirdos in one sense or another. A fascination with evil isn’t a crime, nor is a preoccupation with what makes a serial killer different from any other amateur painter or grower of hair (a lock of Charles Manson’s shaggy mane will cost you $800). Some people believe these artifacts have supernatural protective powers, called “the Talisman effect.” In an article published in U.S. News & World Report, several collectors are profiled, including a 46-year-old man who has been accumulating murderabilia for eight years. “The art is an expression of the person and who they really are … It amazes me that so many of these people have a real art talent and could have made something of themselves if they hadn’t committed the crimes they did,” he said, but there’s a reason the vendors have been driven underground.

Despite offering Zimmerman’s painting for sale, eBay banned murderabilia listings in 2001, and now you’ll have to go boutique if you want to spend your dollars on the stuff — to places with names like Murderauction.com or Darkvomit.com. Dark vomit dot com! Anyway, the real moral issue at stake is where those darkly vomited dollars go. The proceeds from the sale of the Unabomber’s collectibles in 2011 went to his victim’s families, but as Andy Kahan, the originator of the term “murderabilia” and the director of the Mayor’s Crime Victims Office in Houston, told U.S. News, “We give [the killers] infamy and immortality that they richly don’t deserve, all achieved by committing some of the world’s most cold-blooded, diabolical crimes in this country’s history” when we purchase these relics from third-party vendors. The conversation about whether these sales should be permitted under the First Amendment or outlawed in the name of bad taste has been ongoing for years (and inspired a film in 2010). Son of Sam laws, and their newer incarnations, are sticky territory, falling into a gray area that threatens our inalienable right to do things other people (the victims’ families, in particular) might find off-putting.

Browsing the array of murderabilia for sale on niche sites is kind of like strolling through a crime museum, harmless (if scary) and enlightening. You can take a peek at the Serial Killer Trivia Game that’s no longer available on Amazon, or consider a pinkie ring that once belonged to “the Internet’s first serial killer.” Dirt from Ed Gein’s grave? $25. A spaghetti recipe from a child killer? On sale for $75. Some of them are actually pretty tempting (as these things go), like the $20 Heaven’s Gate initiation tape, until you realize that it’s available online for free.

Being permitted to explore dark alleys without fear of bodily harm is one of the web’s most prominent ambivalent pleasures, whether it’s staring at photos of the worst cases of the disease WebMD convinced you that you suffered from, reading offensive blog posts and considering all the different strange textures of humanity from every angle, or diving deep into the free death spell archives (“Although none of the spells will directly cause the death of the intended victim they will cause the body to get ill and die” — just so we’re clear on that). The question is, when does morbid interest make you complicit in suffering? When you stare, or when you spend? And does owning something created by an evildoer rub off on you, or does it somehow inform and protect you against the darkest part of yourself? I don’t know. All I know is that it makes for a crappy gift for Grandma, unless she sleeps upside-down in a dungeon. And even in that case, you could go crazy with the Rasterbator and some stills from her favorite true-crime documentary with much less damage to your wallet and your conscience. Happy shopping.