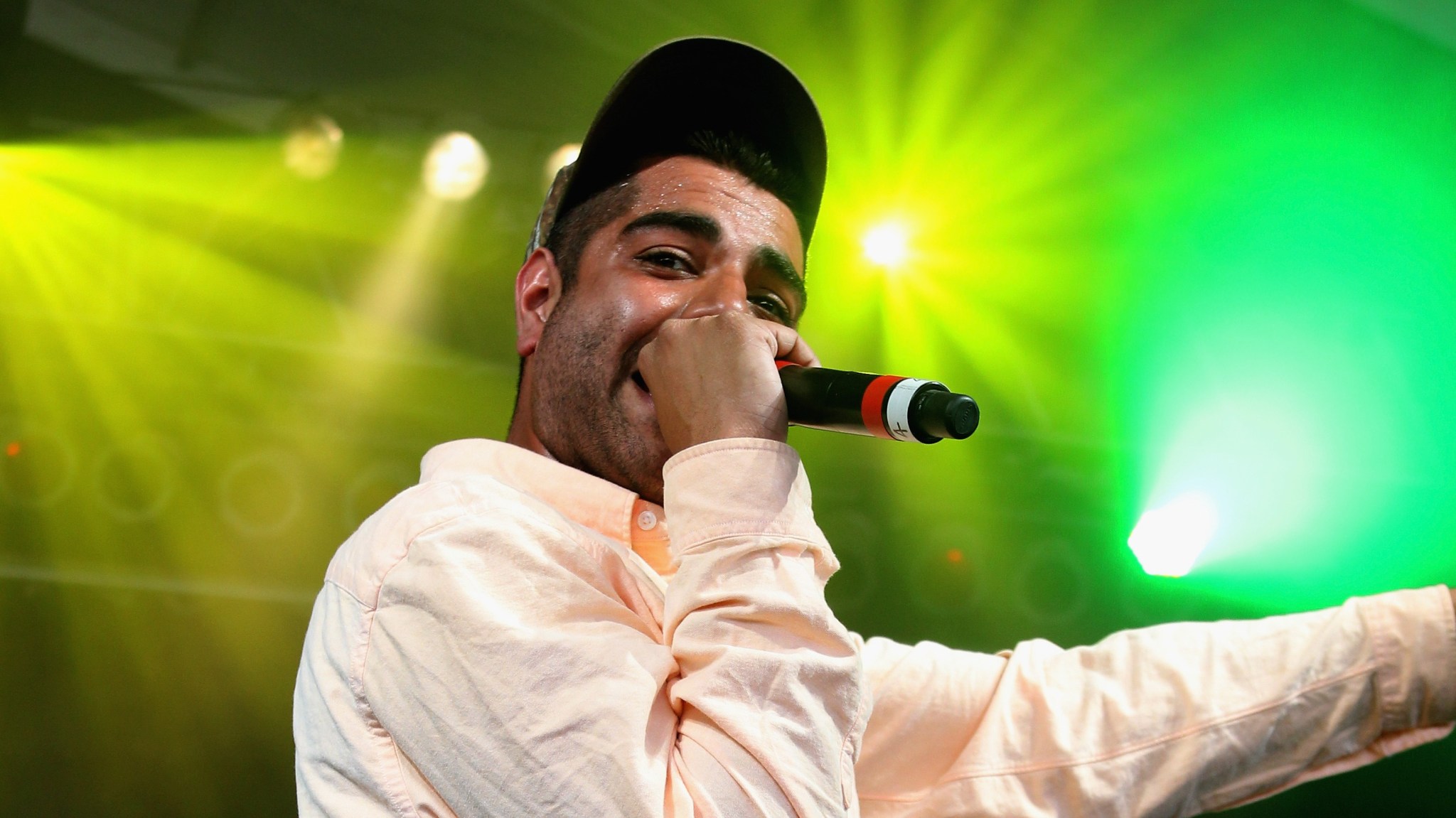 Two days before I meet Himanshu Kumar Suri, a.k.a. Heems, a.k.a. one of the two rappers who brought “Combination Pizza Hut and Taco Bell” into the world, this is what he tweets:

Here Lies The Fat Guy From That Das Racist Fad

On a warm Wednesday in Brooklyn in early August, Heems isn’t fat, or even chubby, but he does seem exhausted enough to drop dead at any second. The 29-year-old Queens native looks stunning in an African-print inspired suit made from deep-hued fabrics he discovered in Thailand. Instead of a chain, he’s got a necklace of chunky rudraksha seeds. Later, I’ll find out rudraksha is spiritually significant in Hinduism and can be worn to ward off unhealthy habits.

Once we’re seated at adjacent corners of a table at Baby’s All Right, a restaurant/venue in Williamsburg, I mention that Heems looks sharp but not exactly well. “How should I be right now?” he mumbles. “How would you expect me to be?” I have no idea how he feels about doing this interview. His reply to my initial email request for a profile was “yes yes yes so down.” A few days later, by text: “Im in bk now can meet. well talk outside or at the fried chicken spot. But I gotta leave in an hour.” Then, earlier today: “U can ask me follow ups after the set but ill be drunk then.”

Heems, who’s rapped almost as much about depression and self-medicating as he has social and racial issues and fast food, is frustrated. He’s living at his parents’ house in Long Island, preparing to release Eat Pray Thug, his debut commercial solo album and his first new collection of music since the two strong mixtapes he threw online in 2012. Heems wrote and recorded the record in Bombay over three days last December. “I didn’t even really write a lot of it — I would just go in, lace like eight bars, and then think, and then lace like eight bars,” he says, tapping at a white Samsung tablet, sipping a whiskey and Coke, making as little eye contact as socially allowable. He spent three more days mixing the record, he says, and started waiting.

Heems is signed to Megaforce Records, a Sony-distributed indie that got its start alongside Metallica with Kill ’Em All and Ride the Lightning in 1983 and ’84. Das Racist inked a one-album deal in July 2012, just before the group disbanded. Heems and Victor “Kool A.D.” Vazquez began planning solo albums. Heems liked the notion of being a hard-to-peg hip-hop act on a thrash metal label. (Megaforce’s recent non-shred output includes Cyndi Lauper and Hank Williams III. The site features zero mentions of Heems, Kool A.D., or Das Racist.) The biggest benefit, theoretically, would be Heems getting to bypass the responsibilities he oversees with his own indie label, Greedhead, which got its start with Das Racist’s pair of classic mixtapes in 2010. The group’s one and only studio album, Relax, was a Greedhead release with Megaforce distribution.

But now Heems says he feels like he’s in purgatory. “It’s been extremely frustrating because I want to put this out, and I wanna tour, and I wanna move forward. I need money and shit, and until I put this music out I can’t tour.” He says he almost regrets not doing his album through Greedhead. Kool A.D., the self-proclaimed “second Latin rapper to like the Beatles,” left Das Racist in mid-2012 and leaked his solo record on Bandcamp in March 2014. He says he never progressed past a handshake deal with Megaforce. “Maybe Hima’s situation is different because he actually signed their agreement?” Kool A.D. tells me by email. “I don’t know, I haven’t really talked to dude since I quit.”

Megaforce president Robert John, reached by email, says: “We are trying to get it out this year. It’s been really tough clearing songs…. I mean REALLY difficult. We started clearing in Feb/March of 2014 and we are still not done. We have a couple songs left.The album is insanely good. I always felt Heems, Kool A.D. and Das Racist are one the most ground-breaking artists and band [sic] we have ever worked with… and we don’t do a lot of hip hop.”

Heems and I have been talking for seven minutes when he steps out for a cigarette. He leaves me with his tablet and a man-on-the-street–style video for an Eat Pray Thug track, “Hubba Hubba Hima,” filmed in Japan. It’s a grimy, twichty beat in the vein of “Cowabunga Gnarly,” a Wild Water Kingdom standout. The Heems formula is intact: sunny slacker boasts (“Hima is a man / he follow through with plans / he follow up with fam”) and sad/fun drug use (“we pop pills and that yay-yay on that big book from A.A.”). Video Heems is dressed identically to real-life Heems.

After his smoke, Heems tells me the only guest verse on Eat Pray Thug comes from 66-year-old New Age author and alternative medicine champion Deepak Chopra. “He did it over the phone so it sounds like one of your boys rapping from prison,” Heems says.

An NPR reporter once reflected, after doing her damnedest to wrangle a Das Racist interview, that “getting these guys to talk about anything for more than a few seconds without veering toward the nearest punchline is nearly impossible, and don’t expect them to let you in on the joke once they get there.” Remove the “punchline” part and substitute, I don’t know, beleaguered sarcastic nihilism? That’s my sit-down with Heems. Deepak Chopra? The guy Heems called “a big fat twat” on wax? “I’m serious,” he reassures me. We’ll see, I guess.

Heems’s spiel about Eat Pray Thug goes like this: “The album is a manifesto about being a young chap, being a brown lad in post-9/11 America. Of how to put your best foot forward as a brown man, as a brown body in a state of affairs where the brown body is consistently policed by Babylon and the white man and the white devil and a system that’s created to put the black and brown body in prison.” This is the deepest our conversation will get, but his energy has ebbed so low, and his eyes are so close to shut, that he could be sleep-talking.

It’s been exactly 15 minutes, and Heems’s tablet is dying, so that’s all. Almost a week later, he’ll publish a flurry of tweets about Eat Pray Thug. The label wants a potential hit song, he writes. (“Who the fuck you think you signed? I make post-9/11 dystopian brown man rap. Not very radio friendly.”) Apparently there are discrepancies about expenses, and communication has become all but nonexistent. The final tweet won’t stay online for long before he deletes it: “I don’t care about press or tours. I need food. I’m interviewing for full-time marketing jobs and ima quit rap.” The other remarks will stick around for a couple days before disappearing.

The 150 or so black and brown bodies and white devils assembled for Heems’s set are patient. We’ve just been rocked by the Kominas, a Pakistani American trio from Boston who cover “Imagine” and specialize in two-minute punk blasts with reggae and surf-rock sprinkles. Heems’s set time, printed at the door, is 10 p.m. After that will be a DJ set from Charanjit Singh, a 70-something-year-old acid-house pioneer visiting from Bombay.

Heems shows up with another whiskey-Coke at 10:20. His mic check gets applause. Onstage, he looks like a minor star. Ashok “Dapwell” Kondabolu, Das Racist’s hype man, is mingling on the packed floor. Heems’s beats will come from his tablet tonight, and the crowd collectively shudders when those devastating headphone-jack volume-pops crash the speakers. I know the problem Heems is dealing with; I struggled with the same issue earlier, as my headphones flickered in and out while I watched the new music video.

Heems seemed eager for me to see this show. At 10:29, he boos himself. He wants his video projections to land on a screen the venue doesn’t have, rather than the bejeweled wall of lights behind the stage. It’s 10:32 when we hear a snippet of the Vitaminwater jingle Heems recorded for a Japanese ad. “New! Plus York! Equals New York!” Then it’s “Thug Handles,” the junk-food jam from Nehru Jackets. Performance Heems is totally unlike Interview Heems. He’s spontaneous, precise, playful. He looks almost fully alive, declaring himself “redeemed” after the first song and muttering a bit of “Redemption Song” in the fake patois Das Racist once rapped so well about.

And if he needed to be redeemed, he has been. The show’s now on rails. The Das Racist joint “Rapping 2 U” hits, and Heems’s voice isn’t so much gritty as it is all grit, like the verse on “Michael Jackson” in which he growls that unbeatable hip-hop line, “YEAH, I’M FUCKIN’ GREAT AT RAPPINNNNNNNG.” When Heems starts spitting about overdosing and being the “brown Chris Farley,” his voice wakes the rest of the way up.

We get to hear something like a half-dozen Eat Pray Thug cuts, and they rule. One has Heems roaring hard enough to make the shrieks on Yeezus sound like kittens. Feelings — anguish, rage, unfiltered pain — spill all over the stage. After “Soup Boys (Pretty Drones),” Heems is awe-struck. He explains how one lyric references a New Jersey gang who swore, in the late ’80s, to attack anyone they saw with a bindi or tikka on their forehead. “So the line says ‘they dot-bustin’ / hate crime, race war,’” Heems says, “and I put the mic in the crowd, and this group of like six Indian dudes here just yelled ‘RACE WAR!’ It’s one of those things where you don’t envision the beauty of your work as you’re writing it down. But then you see a bunch of young kids yell ‘RACE WAR!’ casually while drinkin’ and hangin’ out on a Wednesday night? That’s why I do this, man.” Then he plays “my pop song,” a throbbing, melodic thing that reminds me of “Coochie Dip City.” He halfheartedly plucks an unplugged bass guitar, as if to anchor him through the story of heartbreak.

“Shut Up, Man” and “Relax,” two of Heems’s all-time best moments, lead off a medley of Das Racist verses set to silky beats completely unique from the originals. He pretends his microphone’s a guitar, the way he used to onstage with Kool A.D. and Dap. He dances through a new song without touching the mic once. The skittering “Michael Jackson” beat drops; 20 seconds in, Heems starts slurring, then presses stop and says, “Yeah, right.” The old Das Racist antics are intact, if not as extreme. Heems has us chanting “I’m an all righttt personnn” over and over. He hollers “U! S! A! U! S! A!” a few times before breaking away into laughs.

“I’m hoping my album will be out in November,” Heems tells the crowd at the end, tablet clutched to his chest. He sounds at least half-convinced.