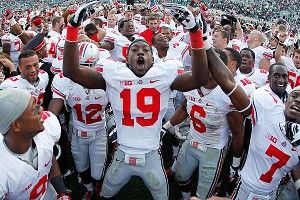 I’m running a college football pool this year, and the format is pretty basic: Each week, the 18 players pick 10 games against the spread. Our goal is to have all the high-profile games represented, and to avoid spreads higher than 30 points. Simple.

We’re five weeks in, which means each of us has picked the results of 50 games. If you flipped a coin, you’d expect to get 25 of them right. As college football fans, we don’t flip a coin; we resort to our deep knowledge of the game, past results, statistics, injury reports, and various other minutiae. And yet, our current leader has 26 points. I’m in second place, with three others, at 25, and everyone else is below the .500 mark.

Is that normal, or are we just really bad at picking football games? It seems like in a group that large, somebody would have to do well, if only by luck. The league average is 4.22 points per week, and again, only one person has actually been successful. It blows my mind. I think the story that best represents our pool came from Week 1, when a gal nailed nine of 10 games to take the weekly prize. The next week, after I sent out the e-mail with the week’s picks, her response was hilarious and infuriating all at once: “Guys, I have no idea how to pick against a spread.”

In other words, she thought she was just picking the winner in Week 1. Nine of 10. Agony.

5. No. 21 Nebraska at no. 12 Ohio State
At this point, I’m rooting like crazy for OSU to go undefeated. The way they keep winning close games is fantastic, and I enjoy the thought of a team that can’t compete in a conference championship or a bowl game running the table. It’s a little like Ryan Braun competing for the National League MVP award after failing a drug test and winning a controversial appeal; it’s a thorn in the side of the establishment, something they want to ignore but cannot. And imagine how insufferable Ohio State fans will be if this goes down! The Buckeyes are playing good, smart football, but I think we all know they’re nowhere near the elite level of a team like Alabama or Oregon. But check the schedule. After Nebraska, there are no more ranked teams to contend with, and all of a sudden 12-0 looks like a possibility. When Denard Robinson throws 10 interceptions in The Horseshoe on November 24, I want Urban Meyer standing in front of the press telling everyone who’ll listen that he knows they could compete with the big boys, if only they had a shot.

4. No. 23 Washington at no. 2 Oregon
Washington is the William Henry Harrison of being in the top 25.

2. No. 5 Georgia at no. 6 South Carolina
I’ve been down on Spurrier and South Carolina since they survived a scare against Vanderbilt in Week 1, so the temptation here is to roll with the Dawgs. And since Spurrier has become the latest thin-skinned head coach to try to bully a reporter, I’m going to do just that. At the moment, Georgia averages 250 rushing yards per game, and the result of this one will probably depend on whether freshmen RBs (and North Carolina natives) Todd Gurley and Keith Marshall can crack South Carolina’s front line, which holds opponents to 2.2 yards per carry.

1. No. 4 LSU at no. 10 Florida
Alabama is holding up its end of the ‘invincible duo’ bargain, but there are some strange happenings in the Mad Hatter’s kingdom. Two weeks ago, they barely edged Auburn on the road, and last week they looked very vulnerable against Towson, of all teams. This would obviously be a monumental win for an undefeated Florida program that showed true grit by winning at Texas A&M and Tennessee earlier this year, and for the first time in more than a year, LSU actually looks vulnerable.

Once again, I make a desperate plea for the powers that be to stop scheduling every marquee game at night. Of the five gems listed above, only LSU-Florida is happening before 7 p.m. And can anyone remember the last time we had a good noon game? Is it because West Coast people don’t want to get up early? Are we being held hostage by those lazy L.A. types? Grantlandddd!!!! (Fist shaking.)

The schedule below assumes you have two ways to watch games, and in extreme cases relies on your deft remote control skills.

I bet Wildcats think “Nittany Lions” are super pretentious. Also, Northwestern being undefeated is the goofiest story of the season.

Noon — Kansas at no. 7 Kansas State — FX
If only to watch Collin Klein inspire the Charlie Weis slack-mouth puzzled face, over and over. And oh, look, another coach who can’t take criticism from a newspaper. A student newspaper, this time! Football coaches might be the worst people on earth.

3 p.m. — Arizona at no. 18 Stanford — Fox
Hey, Stanford, you’re a Pac-12 team. We expect certain things, and by certain things I mean 60 points per game. Stop with these SEC scores.

3:30 p.m. — No. 17 Oklahoma at Texas Tech — ABC/ESPN2
The Red Raiders are undefeated, and, I have to imagine, pretty annoyed that Northwestern gets a top 25 ranking and they don’t.

6 p.m. — Washington State at no. 14 Oregon State — Pac-12 Network
The Beavers are the coolest story in football this year, but it would be just like that zany Mike Leach to throw a wrench in the works.

8 p.m. — No. 3 Florida State at N.C. State — ESPN2
I live in the NC Triangle area, and believe me when I tell you that State fans are already in their basements with the doors locked and the storm windows up. They know this is going to get very ugly.

On October 5, 1982, “Kickin'” Kyle Mortimer became the first Duke placekicker to kick with one foot rather than hopping up to the ball and striking it with both feet while falling over backwards. Mortimer was forced out of school after one game by traditionalists who considered him a “hot dog.”

5. Stefphon Jefferson, RB, Nevada
So many ways to make that ‘f’ sound. He’s leading the country with 877 yards rushing, which puts him below Barry Sanders pace but above 2,000 yards pace.

4. Terrance Williams, WR, Baylor
Leads the NCAA in receiving yards despite only having four games under his belt. He’s on pace for almost exactly 2,000 yards, which has been done just once in FBS history, by Nevada’s Trevor Insley in 1999.

1. The Kleinapple Express, QB, Kansas State
I don’t believe in cults, but if there were a Collin Klein cult, I’d be in an underground school bus cursing Janet Reno within the week. Enjoy the games.