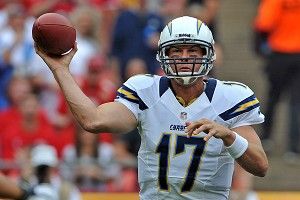 Here we are. A good four days later, and I’m still sick to my bloated stomach over the latest Cowboys meltdown. I’ve tried to conjure up a non-football analogy to describe what I’m feeling, and the best I can come up with is that it’s similar to when an average-at-best Bears squad embarrasses your disgustingly overexposed, overrated, and overpaid team at home. It’s sort of like that.

Plus, I just suffered my first losing week of the season, jermajesty-wise* (-16,250). This, despite my “New England (18/1) to score the most points in Week 4” play coming through. Shame on you, Vegas, for listing such ridiculous odds on Tommy Uggs and the potent Pats offense.

Have I fully confused you enough with meaningless numbers? Good. Here are more …

(*Obligatory weekly explanation: A “jermajesty” represents the fake name given for a dollar amount. It is also the unfortunate name of one of Jermaine Jackson’s sons, blah, blah, blah. You get it.)

San Diego over 25.5 points vs. the Saints

OK, so the slam dunk lock of the year went down for the first time in Week 4. By which I mean anyone playing against the Saints to go over their designated total. In my defense, I was one measly Rowdy Roddy Piper–esque eye poke on Aaron Rodgers away from cashing in. I still like the prop to bounce back this week, as Philip Rivers & Co. light it up against the Saints’ rancid defense (24th vs. the pass, 32nd vs. the run, 750th when facing a QB who is out to prove his team made the right choice by opting for him as a starter over his opponent) Sunday night in the Superdome. 25,000 jermajesties

I’m factoring in the hangover theory heavily in relation to the Bears and their offense this week. Dallas to Chicago to Jacksonville on a short week should slow down Chicago’s offense. Also, Bears quarterback Jay Cutler has struggled against the Jags (0-2 career record). I know — I’m reaching. Total sour grapes that we’re turning into 1996 Chateau La Mondotte Saint Emilion wine. (I’m told it retails for approximately $608 a bottle.) 12,000 jermajesties

Falcons (8/1) to score the most points this Sunday

I don’t care if this team is playing a doubleheader in quicksand — 8/1 is too high for Matty Ice and his Ice Capaders. Oooh … I think I’m onto something. 3,000 jermajesties

Look for the Jets to turn to God’s favorite player early on to inspire their anemic offense as well as their bewildered home crowd. Or more likely look for a pick-six, fumble return, kickoff/punt return for the “everything goes right for us in 2012” Houston Texans team. 3,000 jermajesties each

2/1: Odds we eventually find out that the recent addition of a Victoria’s Secret store to Cowboys Stadium (yes, that’s true) plus forcing the players to wear pink during October are both factors that led to Tony Romo throwing like a girl in the Monday Night Football game

That may have been the most painful joke I’ve ever written. I’m this close to giving up hope and rooting for Romo to sign a nice deal with the 49ers — a team that will actually allow him to win.

Perhaps I’m being unfair. Williams’s 1.5 sacks don’t seem like a lot, but when you break it down, it comes out to a whopping three-eighths of a sack per game. (Buffalo wings served best when dripping with hot sauce and sarcasm.)

Even odds: The Canadian man who won $725,000 off of that botched Seahawks/Packers call donates his winnings to a charity that then has enough integrity to turn it down out of principle

Over/under 1979: What year will feature the most current reference used by Chris Berman in his Two-Minute Drill this week

Under! Last week, he pulled out a “Maggie May” reference to illustrate something about the refs returning back to school in late September. (What, no Welcome Back, Kotter?) He solidified it by presenting the actual Rod Stewart album from what I’m guessing resides in his original LP collection. This week, I’m predicting an Aaron Rodgers comparison with Buck Rodgers in the 25th century. God love Boomer!

Over/under five minutes: Time from right now when the select few who still think anyone other than Triple Crown winner Miguel Cabrera ought to be named MVP should be forced to undergo a CAT scan

Under. In fact, now’s the time. Hurry up and make the appointment. Mike Trout is an incredible young player with unlimited potential, but not giving Miguel Cabrera the MVP in his Triple Crown season is like not giving Halley “Comet of the Year” honors in 1986.

After 16 straight extra-inning wins, it has to happen, right? Actually, the rule of thumb is they’re probably safe so long as I’m not rooting for/betting on them. Yes, O’s fans, you can go ahead and consider that a bribe. Tweet me and I’ll forward you my PayPal info.

I’m going under. With Snooki already knocked up and the Situation on the wagon, Season 6 promises to be more like Breaking Amish with nothing more than a smattering of fist pumps and Ed Hardy T-shirts.

1,500/1: Odds one of the girls discussing the debates with my cousin on Jimmy Kimmel Live ends up running the country

FYI, the boy in the orange shirt belongs to me. And I can tell you the only way he’s going to care about these debates is if one of the candidates promises to make The Undertaker the new Secretary of Education.