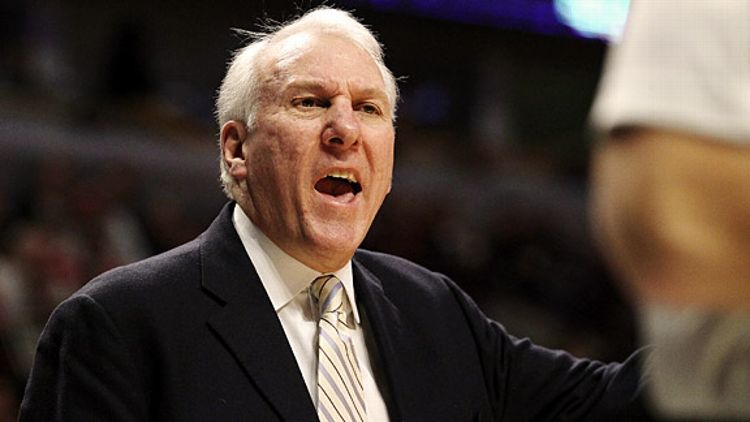 1. Gregg Popovich, American Exceptionalist
Simply for this searing, classically Popovichian statement about whether Ricky Rubio needs to adapt to American culture: “They’re more cultured than we are … Like we’re the cultured ones? Are you serious? Have you watched TV lately? Have you seen what Americans do? How many languages do you speak? And you wonder how they’re going to adjust to our culture? I hope they avoid it and keep their own!”

2. Fabolous, The Next Lawrence Of Arabia
We know what won 2011, but Fab got off to a really good lead in 2012 with this tweet. Sheikh Loso, people. Sheikh Loso.

3. Roy Hibbert, Actor
Via Must-See TV enthusiast Amos Barshard, we celebrate the Pacers big man for his activities off the court; namely, his performance on Parks and Recreation. Perhaps more hilarious and heartwarming is the explanation of said cameo, via Pro Basketball Talk: “My fiancée and myself watch this show called The Good Wife … I started thinking to myself, ‘What TV show do I watch that I want to be on?’ I watch Parks and Rec. It’s set in a fictitious city in Indiana. I called my agent. He called [Saturday Night Live creator] Lorne Michaels. And we went from there.” I totally think about what shows I want to be on whenever I watch The Good Wife. Nice to know I’m not alone in the universe.

The best part of all of this? Hibbert’s burgeoning friendship with Parks actor Ben Schwartz, who plays Jean-Ralphio on the show. “He’s a close friend of mine now, too. We talk all the time. I go see his comedy shows whenever I can in L.A. I like him a lot.” So if you see a really tall dude with Larry Bird on speed dial at a UCB show in L.A., now you know who you’re looking at.

5. Serena Williams, The Anti-Coach Taylor
There is no competition: “I mean, I don’t love tennis today, but I’m here, and I can’t live without it … so I’m still here and I don’t want to go anywhere anytime soon. … It’s not that I’ve fallen out of love; I’ve actually never liked sports, and I never understood how I became an athlete. … I don’t like working out; I don’t like anything that has to do with working physically.” All this speech needs is a soundtrack.

6. The Alamo Bowl
Bowie Knife collector Michael Weinreb nominates this little bowl that not only could, but does, on a pretty regularly basis: “Having watched one and visited another over the course of the past couple of months, I can say that Alamo Bowl > The Alamo.”

8. Scott Drew, Baylor
Nominated by Shane Ryan, who shares my last name and my appreciation for Bob Huggins: “Drew is the head coach of Baylor, one of the four remaining undefeated teams in college basketball, but I’ve got him on the list because it occurred to me that he’s the Bob Huggins of our time. They’re different, on the surface; Huggins is large and gruff and unfriendly, where Drew looks like a cloying preacher, a pudgy dude with a cherubic face and a wide, polished smile. But Drew at Baylor is just like Huggins at Cincinnati. The athletes are great, the team is great, but the two thoughts that constantly cross your mind are that something unclean is happening, and they’ll never win a title. Still, the Huggins of any generation deserves a Rankonia pat on the head.”

That’s how you declare for the draft.

10. Ilya Bryzgalov
Courtesy of Sarah Larimer and Katie Baker. The breakout star of this season’s 24/7 has provided hockey fans, and just people with HBO, with some seriously humungous, big science lessons …

As well as one of the most entertaining press conferences in recent memory. This might be the quote of the year: “I have great news and even better news. OK, great news: I’m not playing tomorrow night. Good news: We have a chance to win the game tomorrow.” He and Serena Williams should def hang out.