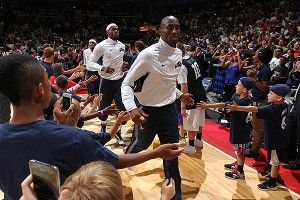 Let’s just sum up this guy’s week real quick: negged the President of the United States and the First Lady’s lack of comfort with public displays of affection and called David Stern’s proposal to have Team USA be made up of players age 23 and under “stupid.” Barack, Stern. Ether. He probably told all those kids in the picture above that they would never amount to anything. And he will probably spend the rest of his life making sure of it. So if you’re one of the kids in the above picture: I’m sorry. Also?

Not only making the team and already establishing himself as “not Christian Laettner,” but for getting unibrow tough-love support from President Obama:

Barack to Davis: You know you’ve got to earn it out here.
Kobe to Barack: If he doesn’t listen, we’re gonna shave his unibrow.
Barack to Kobe: Naw, that’s trademark now, that’s big money.

3. NASCAR: Dawn of the Dead

Mark “Ricky Bobby” Lisanti on the cars that go vroom:

Has there ever been a better advertisement for the power of motorsports? Team Death (sponsor: GoDaddy.com) pulls up outside their house for a pit stop, the Reaper beckons from the driver’s seat … and he goes. Well, his spirit goes. But his body stays. For 18 months. NASCAR Forever.

4. Bob Ryan: Bringing It All Back Home

It takes a lot to get me to laud anything that has to do with Boston sports, but I nominate Bob Ryan, who officially covered his final Red Sox game this week. Guy’s a legend.

If you need Sean Fennessey he is selling surplus Jeremy Lin memorabilia out of the back of a blue-and-orange Yugo:

Shout-out to J.R. Smith, the most candid member of the DWI-receiving, grudge-holding, offer sheet-rejecting, 8th-seed-having New York Knicks. Sure, he spoke truth to power about the poison pill in Jeremy Lin’s contract from the Houston Rockets. But he also spoke a greater truth.

I hate talking on the phone! #Factsaboutme

Thank you for sharing, J.R.

Andy Greenwald looks to the future:

In an effort to upgrade his outfield, the Giants GM traded lefty starter Jonathan Sanchez to the Royals for Melky Cabrera. Cabrera’s tied for second in the majors with a .353 batting average, and was named MVP of the All-Star Game — the one played in Kansas City — last week. Sanchez owns a 7.76 ERA, with more walks (44) than strikeouts (36), and 109 total base runners allowed in 53 innings. And he was just designated for assignment Tuesday by the Royals. Keep Rany Jazayerli away from sharp objects, is what we’re saying.

“I may have snuck a celebrity back to my room without anybody knowing, and snuck him back out. But that’s my Olympic secret.” The best part, according to Solo? “When we were done partying, we got out of our nice dresses, got back into our stadium coats and, at 7 a.m. with no sleep, went on the Today show drunk. Needless to say, we looked like hell.”

Needless to say, high fives all around, ladies.

Mike Philbrick points out that Rajon Rondo is one of Rajon Rondo’s interests on Facebook:

Rajon Rondo is not lacking in confidence: “Like I said before, I have matured a lot and my game has also. I think I am one of the best playmakers in the league. I think I’m the best point guard in the league.”

Confidence has always been a hallmark of Rondo’s game. I had the opportunity to meet no. 9 in September of 2010, and when asked what he would be doing if he weren’t playing basketball he replied, ‘I’d be a face model.’ Your move, Chris Paul.

Here’s Marvin Lewis on former Bengal Johnathan Joseph calling the Bengals cheap: “I was told this morning about Johnathan’s comments that were printed. It’s my fault that I feel that a player doesn’t need to take a dozen Gatorades home in his backpack each night and that we are paying him a salary. I’m sure that Johnathan would not have been one of the abusive players but it is my policy.” Never change, Cincinnati Bengals.

This Melo and LeBron Photo Wins the Internet