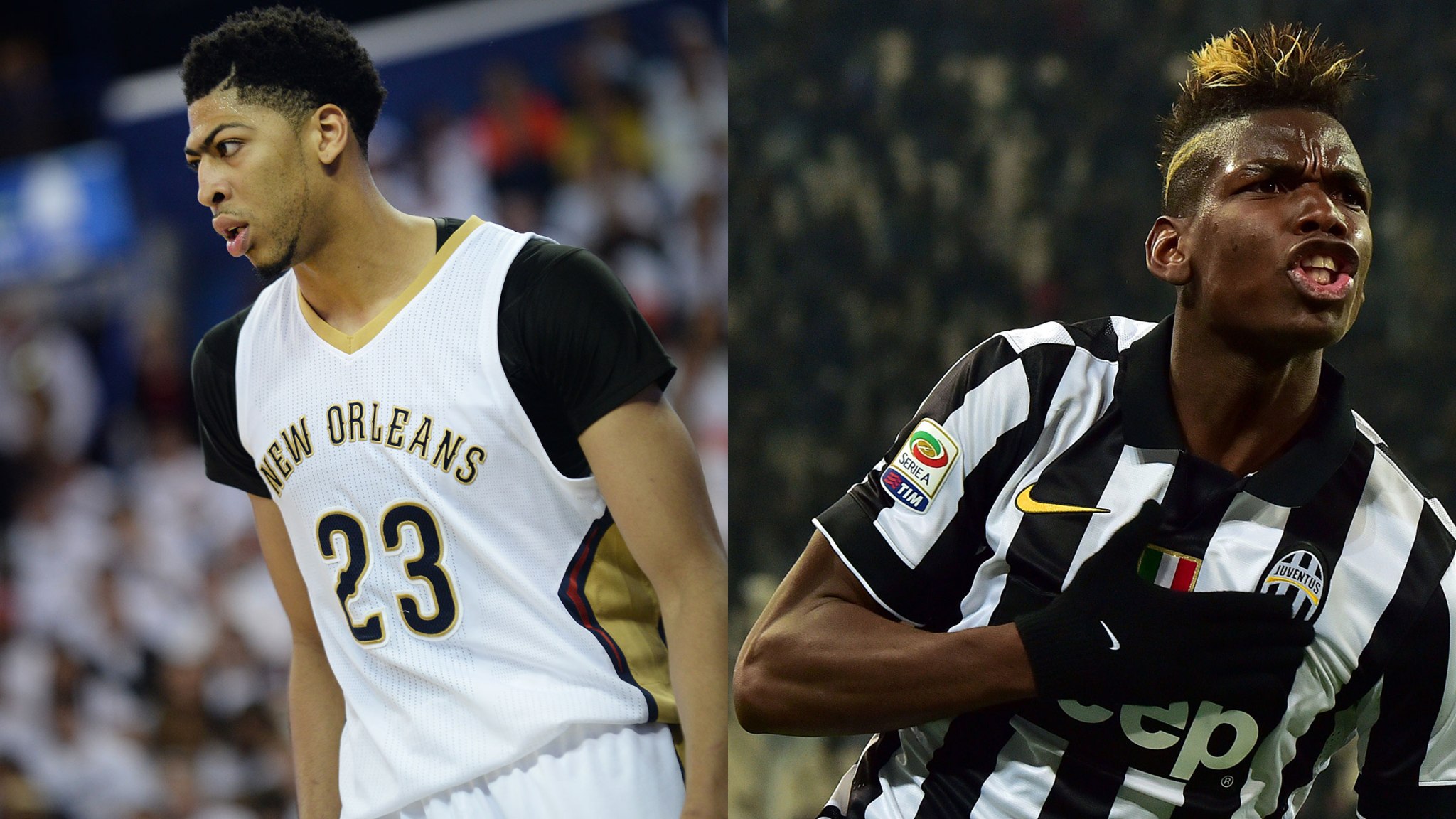 Watch basketball and soccer enough and the connections become impossible to ignore. Whether it’s Xabi Alonso essentially running the point for Bayern Munich as the surrounding attacking players move through their offensive set off the ball, or it’s James Harden driving into contact with the sole intention of drawing fouls, the mechanics begin to converge. And then there’s also the common tension between team and individual performance — the unclear ways in which each player’s skill sets influence his teammates. The challenge of dividing up individual credit and blame in what are inescapably team games is central to talking about both sports.

So, with the NBA playoffs in full swing, we present to you our basketball-soccer crossover all-star team. If you’re a devotee of The Beautiful Game who rankles at the mere thought of your beloved sport being compared to one of its vulgar American brethren, then, well, here’s a picture that will probably make you very angry. But if you’re a soccer fan who’s tuning into basketball to get your fix as a tepid end to the domestic seasons across Europe looms, a basketball fan who uses soccer as a fallback to fill those lonely weekend-morning hours, a diehard of both games, or somewhere in between, then this list is for you.

They’re both walking human highlight reels. They both already have a number of iconic moments to their names. And you know what? While we’re here, let’s take a moment to bask in the glory of Davis:

Despite what you just watched, these are more than actors in a highlight reel. Both Davis and Pogba, both only 22 and born just four days apart, have remarkably complete games. There’s that once-in-a-generation freakish athleticism that hangs the neon light of potential stardom over their heads for everybody to see,1 but they’re each way ahead of schedule in refining that talent into a complete, world-conquering package. However, you’d be forgiven if you missed that, since they both play for teams that have issues getting widespread exposure in American markets.

The present is a joy to watch, but it’s the future that really ties these two together. The NBA has LeBron James and Kevin Durant, while soccer has Lionel Messi and Cristiano Ronaldo — but look five years down the line and it’s Davis and Pogba who should be leading the way. Universal agreement on young players is so rare, but everyone knows how good these two are.

Great scorers who once put up numbers as the focal point of a not-great team? Check.

Big-money moves to a superclub to become part of a group of stars? Check.

Soon discovered that deferring to a superstar (James and Zlatan Ibrahimovic, respectively) hurt their production? Check.

Rumors of locker-room dissatisfaction, complete with additional rumors of end of year departure? Check and check.

Yup, both Cavani and Love view themselves as focal points and are currently asked to exist as role players. Each has been shunted to the wing because someone higher up the pecking order occupies the spaces they prefer to be in. Both are doing fine — excelling, even — but the question is, for how long? Cavani is going on his second season of being forced to track runners and cross balls in order to accommodate Zlatan, and at 28 he’s starting to near the end of his prime. As for Love, it finally seemed like he was fitting in with Cleveland against the Celtics, but then his shoulder got ripped out of its socket, so who knows what comes next. We’ll see whether he opts for a new location next year or comes back for another season of corner 3 after corner 3.

Two guys who are intimately connected to one club and one club only. They’re both — presumably — reaching the end of their careers, and while Dirk and Totti can’t get around as well as they used to, neither one can stop scoring. Now 38 years old, Totti first laced up the boots for Roma in 1992 at age 16, and he’s been the club’s captain since 1998. In other words, he made his senior professional debut the year before Paul Pogba and Anthony Davis were born. And for an old man, he sure knows how to take a selfie — and score acrobatic goals without pulling every muscle in his body:

Compared to the Italian, Dirk, at 36, is basically a baby. But while he hasn’t been with his team for quite as long — he joined Dallas in 1998 — Dirk, now the seventh-highest scorer in NBA history, is every bit the Mavericks icon that Totti is to Roma.

After blazing starts to the season, both Dallas and Roma fizzled out as the year wore on. The Mavs are out of the playoffs and Roma have been bypassed by their eternal crosstown rivals, Lazio, in the Serie A table. While the future of both teams looks murky, Dirk and Totti will continue being their polished, lovable, offensive-minded selves until they ride off into the sunset — be it this year, next year, or in 2075.

There’s something about flashy, hyper-athletic scoring machines who can do whatever the hell they want on the field or floor that opens them up to criticism. When there’s nothing an athlete can’t do, then he must, somehow, be at fault whenever something goes wrong. And when that athlete also has to share a team with somebody who’s even better than him, then he’s Russell Westbrook or Gareth Bale.

Without Durant this year, Westbrook proceeded to lose his damn mind, win the scoring title, single-handedly hoist his team on his back, but still fall a whisker short of making the playoffs. Bale has yet to have that opportunity, as he’s still trapped in the purgatory of expectations brought on by Ronaldo’s shadow. If he shoots, he should have passed to Ronaldo. If he passes, he should have shot. It’s similar to the treatment Westbrook received in the past: Ronaldo cannot fail, therefore Bale must have.

Because never mind that Bale can do this:

Ultimately, the cauldron of fan pressure and media speculation that is Real Madrid might prevent Bale from ever stepping out of Ronaldo’s shadow in the same way that Westbrook emerged from behind Durant. He either has to wait out Ronaldo’s prime — which currently looks like it will be infinite — or move to a team like Manchester United, where he’s more likely to be appreciated for the unique mix of skill and athleticism that he brings, instead of being blamed for not being Ronaldo.

Two things unite Müller and Curry. First, neither is particularly imposing. At 6-foot-1, Müller is big for a soccer player, but he’s without the hulking build of a typical target man. And he’s certainly not as fast as any other superstar winger you’ll find. Similarly, Curry came into the NBA with all sorts of questions about his size, quickness, and ability to get his own shot. And yet they’ve turned into two of the most lethal scorers in their respective games.

The second thing that binds them together is what allows Müller and Curry to transcend any physical limitations: their unbelievable ability to use space. Both soccer and basketball are trending toward teams that work together to create and utilize open areas, and both Müller and Curry are brilliant at finding and exploiting those gaps. In the NBA, we see it with the increased reliance on pace-and-space offenses, using constant ball movement and multiple pick-and-rolls to create shots from the most efficient areas on the floor: either at the rim or behind the 3-point line. In soccer, we see it with an increased emphasis on players in the striker role operating as facilitators, wingers becoming scoring threats, and fullbacks providing width that wingers used to. In the never-ending cat-and-mouse game that is soccer tactics, the best teams have begun focusing less on what talents a position needs and more on where an individual’s talents can be best deployed.

That’s why it is often so hard to pin down exactly what Müller does so well. Curry’s use of space is obvious — though even then, it’s often surprising — because it happens with the ball in his hands and when all eyes are on him.

(OK, maybe embarrassing Chris Paul isn’t exactly an example of Curry “using space,” but really, who doesn’t want to have another excuse to watch that?)

On the other hand, Müller does his most impressive work without the ball. He simply always ends up in the right place at the right time. That’s part of why he’s been deployed all across the front four of Bayern’s attack by Pep Guardiola and his predecessor, Jupp Heynckes. Müller’s nickname2 is Raumdeuter, which basically means “space interpreter.” And even his highlight reels are all about him just showing up in the right places to either play balls into attackers or get on the end of them himself:

Curry and Müller are literally era-defining superstars: personifications of the way their sports have evolved. And as long as that holds true, good luck trying to stop them.

Two guys who specialize in blowing up defenses with the ball in their possession. For a weirdo like me, it’s impossible to watch Hazard play a clever one-two with his center forward to create space in the penalty box and not think of James Harden using a pick-and-roll to barrel into the lane with defenses powerless to do anything but hack him.

Bonus: They both play for incredibly efficient teams whose styles are despised by everyone but their own fan bases.

Both are iconic, despite not having achieved ultimate personal success. They’ve both had a tremendous impact on how the game is played, and their methods have been widely (and more efficiently) adopted by other coaches. D’Antoni ushered in the dominance of the spread pick-and-roll on offense, while Bielsa brought about the wave of aggressive pressing defenses currently sweeping the world. These two are as responsible for major shifts in how the game is played as anybody — even if they may never directly reap the rewards of their influence.