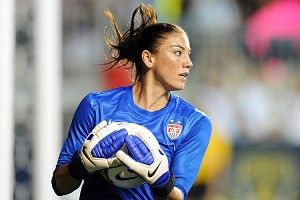 1. Hope Solo: God Forgives, Hope Don’t
The USWNT goalkeeper was warned this week by the U.S. Anti-Doping Agency for testing positive for something called Canrenone, which I may or may have not had at Olive Garden last night, incidentally. She was basically like, “Cool warning.” Rem and I talked about this briefly.

Rem: Am I allowed to nominate Hope Solo for beating her charge?
Chris: Not guilty, y’all got to feel her.
Rem: Teflon Don.
Chris: Hope Solo treated those charges like she treated Briana Scurry back in ’07.

2. Tony La Russa: Still a Winner
Sarah Larimer, who ably steered the USS Rankonia for a few weeks there, gets the no. 1 slot. I personally give Tony La Russa the Rondo Face (that would be :l), but this is a democracy. Take it away, Sarah: “Deal with it, America.” Well put.

I’m going to assume those are their names, because why not. Also, the shot of the two Sideshow Bob-haired tykes hugging dad after his home run derby win was adorable. Anyone over 30 probably remembers reading about and seeing clips of young Prince hanging around major league dugouts and smoking the ball in BP while dad Cecil plied his trade. Imagine the amazing careers the next generation of Fielder boys might have, given they actually seem to have normal, loving relationships with their dad. Or does becoming estranged from your famous, baseball-playing father trigger a chemical reaction that pushes you to reach even greater heights? What about if it’s just a mildly strained relationship? BRB, gonna rip away my kid’s favorite stuffed warthog.

4. Robert Jaworski and Dolphy Quizon: Legends in the Game
Via our resident expert on life and sport in Philippines, Rafe Bartholomew.

On Sunday, Robert Jaworski, the most famous, most beloved, and probably also most hated player in the history of Philippine basketball, had his jersey retired at the Araneta Coliseum. On Tuesday, Dolphy Quizon, almost certainly the most famous and prolific comedian in the history of the Philippines, died at the age of 83. Both enjoyed the kind of career longevity that strains belief. Jaworski was 29 years old and already one of the country’s top players when the Philippine Basketball Association had its first season in 1975. Instead of riding out five last good years, though, Jaworski kept playing and playing, until he finally left the sport in 1998, when he was in his early 50s, as the player-coach of Ginebra gin franchise. He left only because he got elected to the Senate, and even then, he didn’t officially retire because there were concerns his fans wouldn’t support his political career if there were no chance of him returning to the court. He was known for rough, smart play and a “never say die” philosophy — it was about winning, but it could also apply to his never-ending, Methuselah-like career. I love this picture of him, near the end of his playing days, a cantankerous old legend refusing to back down an inch to a much bigger, younger, and stronger American import. Dolphy had comedies for six decades, from his 1950 Dolphy and Panchito, to the 2010 Father Jejemon. When I first learned I’d be moving to the Philippines in 2005, I was told to go to the New Manila Food Mart on First Avenue near 14th Street and rent Dolphy movies. I did, and though I had no clue what anyone was saying, it was pretty easy to enjoy the endless fart jokes and people’s pants falling down. The rest, you could say, is history. Thanks, Jawo, and thanks, Dolphy.

5. Rod Thorn: Small Forward Collector
Andy Greenwald just admires Sixers president Rod Thorn and his dedication to wing play. “I feel like someone needs to tell Rod Thorn that small forwards aren’t like Beanie Babies. Or like pogs or some shit. You don’t need to collect them all. There are some games where it’s important to hoard something. I guess Risk is like that? (I have never played Risk.) BUT BASKETBALL IS NOT ONE OF THOSE GAMES!

6. Jeff Green: Sparkling Personality
Robert Mays wonders whether Danny Ainge knows something we don’t know: “Jeff Green must be a really awesome dude. I mean, the best dude you’ve ever met — a help-you-move, pick-you-up-from-the-airport sorta guy. I say this because considering there are no basketball reasons for giving him $36 million, the Celtics had to be motivated by something else. Jeff seems all right, so I decided it must be his excellent company and not some sort of extortion scheme.”

7. Kobe Bryant: Sports Psychologist
Kobe was recently asked about whether he thinks Kevin Durant, still fresh off an NBA Finals loss to LeBron James, might still be a little bit salty at his Team USA compadre. Kobe’s response: “But then again, I wasn’t playing on the Olympic team with, you know, Ray Allen and Paul Pierce and Garnett. He’s got to look at LeBron every day. I didn’t have to do that. So I don’t know if I could do that. I’d probably be trying to destroy him every single day in practice to try to, I don’t know, take a little of the edge off maybe.” Please, please, someone give me $1 million to make a Kobe Bryant life coach reality show.

8. Harry Redknapp: To Russia With Love?
The former Tottenham manager, not quite England national team boss and glad-handing, wheeling-dealing, good ol’ boy of English football, has been hilariously rumored to be a candidate for the Russia national job. About which he, of course, said, “I haven’t been contacted but I’m sure it’s a fantastic job for someone.” The idea that Redknapp could be managing the Russia national team is very funny until you realize, as I just did, that it will probably, somehow, lead to World War III. Whoops.

9. Charlie LeDuff: A Tradition Unlike Any Other

Craig Gaines on a new kind of golf and golfer: “Last week Pulitzer winner and guy writer Charlie LeDuff undertook a survey of Detroit by golfing across it (save all those “good walk ruined” jokes, haters). You may complain about poorly groomed greens at your muni course, but LeDuff got an earful about budget cuts, abandoned homes, and a lousy job market as he played through the D (finishing with an astounding 643 under par, based on TV station Fox 2’s calculations). I don’t know what it is about Michigan that inspires gonzo sports journalism, but I dig the concept. Somebody ping me when Jon Krakauer examines rural poverty by cross-country skiing across the Upper Peninsula.”

What If Hockey Games Were Called by Soccer Announcers?