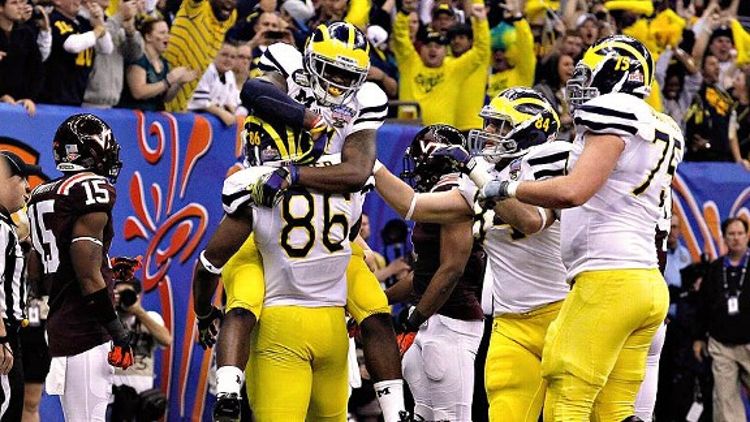 At the end of the Best-Worst Sugar Bowl since Fordham’s 2-0 drubbing of Missouri in 1942, those of us who made it that far witnessed one last inexplicable act: Michigan trotted out a kicker who resembled Nick Nolte in North Dallas Forty, and said kicker stutter-stepped like a bad dancer before the ball was snapped. It was, technically, a false start, but who the hell knew what was real and what was illusory by then? No penalty was called, the kick split the uprights, the Wolverines completed one of the emptiest 11-win seasons in college football history, and the Big Ten somehow found reason to crow about a 4-6 bowl record whose successes were drawn largely from the utter ineptitude of their opponents.

We love this sport for its imperfections, for the fact that it is messy and unpredictable and guided by the whims of college students, but every so often those imperfections can get on your nerves — especially when watching a BCS contest between two teams that probably don’t deserve to play in the BCS in the first place. When a 301-pound long snapper catches a deflected pass off a fake field goal that developed like an OK Go video, something is off-kilter. When Virginia Tech — whose coach, Frank Beamer, is known as the Garry Kasparov of special teams — unveils a flaccid fake punt attempt late in a tie game against a team that had moved the ball only through divine providence, then you start to wonder if someone powerful is trying to send us a message.

And when a potential game-winning catch, by Virginia Tech’s Danny Coale, is overruled by video evidence so not-indisputable that it took about 45 seconds before Coale was trending on Twitter and had his name co-opted by the purveyors of adult websites … well, that’s when you start to wonder if that someone powerful is Bo Schembechler. Because without getting into sinister Las Vegas-based theories, there’s really no other explanation for Michigan winning that game.

Don’t get me wrong: I love watching Denard Robinson. I hope he is a Heisman contender next season. He is the quintessence of a college quarterback with no future as a professional quarterback, and I admire his audacity; when he tucks the ball and jitterbugs downfield in his pumped-up Velcro kicks, it is performance art. But Tech contained Robinson last night. He was forced to throw the ball, and when our man Shoelace tosses the rock downfield, it is downright infuriating. On Michigan’s first pass, Robinson dodged a tackler, rolled to his right, and hurled a water balloon into double coverage. It hung up so long that the Virginia Tech defender lunged for an interception and missed, and Michigan’s Junior Hemingway caught the ball and walked in to the end zone. The Hokies fumbled the ensuing snap, Michigan ordered up that Rube Goldberg fake field goal attempt from the heavens, kicked one more time, and went up 10-6 at halftime.

And here are my notes on the third quarter: “Denard throws slant for INT. Call reversed on replay.”

“Robinson throws to receiver who isn’t open at all in back of end zone. Touchdown. 17-6 Michigan.”

Virginia Tech eventually shook off the shock, and tied the game behind the efforts of rangy quarterback Logan Thomas, who appears to be on his way to being really, really good. But then, facing a fourth down in their own territory, Beamer said he left it up to his punter to run the fake or punt the ball, and his punter compounded the coach’s terrible decision by making one of his own, and Michigan took over. Once again, the Wolverines barely had to move the ball, then kicked a field goal to go ahead. The Hokies tied it at the end of regulation, and on the first possession of overtime, Coale made an astonishing catch that was overturned on flimsy evidence, which goes against all we’ve been taught about the basic premise of instant replay. The Hokies’ kicker, who had nailed his first four kicks and whom I believe they found a few weeks ago during a Creed show at the state fairgrounds, was off-line. Michigan took advantage of the college overtime loophole and won the game without really having to move the ball, once again, on their final possession.

Of course, none of this means the Big Ten is “back,” and none of this means that Michigan is back, either; the Wolverines didn’t even win their own division within the conference. Yet nobody carries the flag for misguided Big Ten pretension quite like Michigan does, so let us permit the Wolverines their moment of glory before Urban Meyer squashes their dreams for the next decade. And let us ignore that in a just and fair universe, this game might have been a rematch between Boise State and TCU, a game in which plays were choreographed with Baryshnikovian precision rather than manipulated by forces beyond our ken. But hey, what fun would that have been?

R.I.P.: How to Make it in America
Which Minor Bowl Game Are You Most Excited About? (And Other College Football Questions)
How The Big East Became The Reclamation Conference

Breaking Down the Bulls' Final Possession