Out of the Turtle’s Den: Duke Escapes College Park 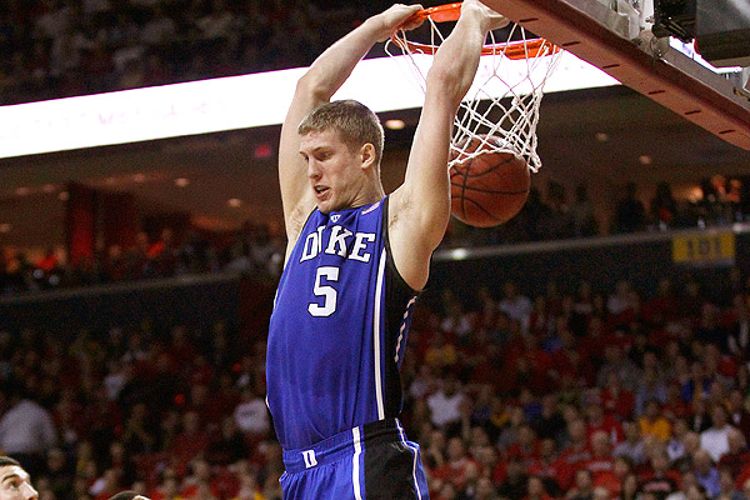 “Mason Plumlee is a man!” I shouted at my girlfriend. She rolled her eyes, but I felt like it was something that needed to be said.

A year, ago, I couldn’t have conceived that I’d be complimenting the tow-headed giant. This was the second coming of the hated Miles, the middle of the Flying Plumblebee trio, the guy who was bound to let you down just when he’d fooled you into believing. It was normal to spend entire games thinking up derogatory nicknames for him. (“Plumblef*** the Younger” and “Mason Clumslee” are two that come to mind.)

But now? Now, Mason is having the best season of his life, a coming-out party of epic proportions. He’s the best Duke player on the court game in and game out, and on Wednesday night, he refused to buckle in a hostile road contest against the hated Maryland Terrapins. The dark days are over. Mason Plumlee is a big manly son of a bitch, and shall henceforth be known only as “Plumdog Billionaire.” Jai ho, you crazy Devil.

It’s hard to explain to new Duke fans what it means to win on the road against Maryland. The Terrapins aren’t what they used to be, it’s true, but for a dude like me, brought up in the Gary Williams-Juan Dixon-Steve Blake heyday, there is literally no game I’d rather see Duke win — or, to capture the emotion more accurately, not lose — than the one at College Park. And yes, that includes the Carolina game.

(I should point out that the majority of Duke fans — even those from my generation — disagree with me on this one. Maybe I’m missing the requisite animosity toward the Tar Heels, or maybe an anti-Maryland feeling has clouded my vision. In either case, you should know, for the record, that mine is not a common viewpoint.)

Mason staved off the Terrapin horde Wednesday and led Duke to a 74-61 win at the newly christened Gary Williams Court all by himself. Exaggeration? Yes, but only a slight one. With a dominating performance that included 23 points on 9-of-13 shooting, 12 boards, four assists, one turnover, and just one personal foul, he was the bright spot. That last stat is more important than you’d think; coming into this game, Maryland was getting to the line at the second-highest rate in the country. By playing strong interior defense without hacking, Mason took away an important element of the Terrapin attack.

Ryan Kelly shouldn’t be ignored; he had an opportunistic 14 points on 5-of-7 shooting, a quintessential White Raven performance, striking when the other team least expected and playing mostly error-free basketball. But the rest of the Blue Devils, especially in the first half, looked ready to concede a second straight ACC game. The perimeter defense, which has plagued the team all season, was particularly awful. More on that later.

First, a bit more on the history and the stakes of this rivalry. Duke has now won four of its last five games at College Park, but before that Maryland won four of six. I spoke with Mark Turgeon, the first-year coach of the Terrapins, the day before the game. What did the Duke game mean for him, a guy coming from Texas A&M and Wichita State? Did anyone warn him what he was about to see?

“From day one people have talked about it,” he said. “It’s what people talk about all year. The Duke game. Yeah, it’s going to be intense.”

He told me it would be the first home game that sold out this season, and that even though he and the team tried to treat it like any other game, the energy would undoubtedly filter down.

“I imagine when the starting lineups are announced, and being in this arena on Wednesday night,” he said, “it’s going to be a lot different than our other home games so far.”

It was Turgeon’s first experience with the Duke-Maryland game, and behind him was a fan base with a reason to feel optimistic for the first time in years. Former Maryland coach Gary Williams led the program from 1989 through 2011, and the pinnacle of his career was a national championship in 2002. It could have been his second straight, but in 2001, the Terps collapsed against Duke in the Final Four after establishing a 22-point lead.

And maybe that explains the added intensity between the two schools, which at times seemed to eclipse the Duke-North Carolina rivalry in the early part of the last decade. The Blue Devils and Tar Heels have never met in the NCAA tournament — and thank God, because Tobacco Road would devour itself in riots — but the bad blood of the Devils-Terps rivalry was thrust onto the biggest stage possible almost at its inception.

After the championship, Williams seemed to lose his recruiting vigor. His teams were consistently well-coached, but the talent wasn’t there. In his final seven years at the helm, Maryland would never make it past the second round. The Washington Post published a brilliant feature in 2009 detailing the Maryland denouement, part of which resulted from Williams’ distaste for associating with AAU coaches. Instead, he went after players with lesser ability but greater drive. The approach led to moderate success in the ACC, but failed to overcome the inevitable athletic disparity in the postseason.

Turgeon told me that a big part of his job at Maryland has been re-establishing ties with those high school and AAU coaches who Williams ignored. As he tries to return Maryland to the top 25, he knows recruiting will be the biggest deciding factor.

“I’m not going to evaluate this year on wins and losses,” he said. “Obviously we have a ways to go on the floor.”

But the Terrapins surprised many of their own fans with a 12-4 start. The momentum had ebbed in the past week, with back-to-back losses to Florida State and Temple, but a win against Duke would change everything.

No Terrapin fan would deny that this is the game they want above all others, and though Duke fans are more cagey about the rivalry, often insisting that it doesn’t matter, the loathing is assuredly mutual. Duke typically owns the lion’s share of talent, and has won eight of the last 10 (and four in a row) at Cameron. Where the rivalry really comes to life is in College Park, when home-court advantage bolsters the Terrapins. Maryland’s fans are notoriously rabid, and the worst of their hatred is reserved for Duke.The combination has created some memorable moments.

2001: Jason Williams’ Miracle Minute stuns Maryland as Duke wins in overtime. Carlos Boozer’s mother is struck in the head by a water bottle, and will later sue Maryland for damages. Duke will unleash another comeback on Maryland in the Final Four and win the title.

2002: The last Duke game at the Cole Field House goes Maryland’s way in a blowout. Dixon leads his team to a victory here, and later to a national championship.

2003: The Blue Devils, the last undefeated team in the country, are blown out again in the first Duke-Maryland game at the Comcast Center.

2005: With Red Auerbach and Cal Ripken in attendance, five Duke players foul out and Maryland pulls off a 99-92 overtime win.

2006: In his senior season, Redick scores 35 points and walks off the court smiling at screaming Maryland fans as Duke wins 96-88.

2007: Duke limps into College Park on a three-game losing streak, and loses 72-60 as Greivis Vasquez scores 18.

2008: After defeating the no. 1 Tar Heels, Maryland rolls up a 9-point halftime lead, only to squander it as DeMarcus Nelson scores 19 second half points to give Duke a 93-84 win.

2009: Dave Neal sends the Maryland fans into a frenzy when he concusses Nolan Smith with a screen, but Gerald Henderson immediately answers with an epic dunk as Duke wins 78-67.

2010: In his final home game, Vasquez scores 20 points to lead Maryland over a Duke team that will go on to win the national championship.

This year, Maryland looked ready to pull off another Comcast stunner. By driving past Duke’s guards almost at will in the first half, the Terrapins took a 5-point lead after ten minutes. The problem that has given Coach K nightmares was resurfacing — the team’s complete inability to play perimeter defense. Andre Dawkins was by far the worst offender. This morning, I watched the replay hoping to find ten examples of his poor defense. It was easier than I thought; I didn’t even have to look past the first half. Focus on no. 20 in the clips below:

Over the ten clips, you see examples of poor on-ball defending, an inability to play against the pick-and-roll, getting burned over and over on back cuts, and failing to even attempt to box out a defender after a shot goes up. Most of the mistakes resulted in baskets. Some didn’t, but that was just good luck on Dawkins’ part. He cost Duke dearly in the first half.

Austin Rivers and Seth Curry weren’t immune to poor defense by any means, but Dawkins solved the mystery of why Coach K is hesitant to play him in big games. The offensive firepower he brings (which was null Wednesday night) isn’t worth the trade-off. Maryland scored easy bucket after easy bucket, and Dawkins was the culprit too many times. It looked to be a three-pronged problem: a lack of natural quickness, a lack of awareness, and a lack of effort. Those first two, at least, were also responsible for Michael Snaer’s wide-open 3 that ended Duke’s 45-game home winning streak Saturday.

And Coach K knew it. With 12:10 remaining, and Duke leading 48-47, he’d seen enough. Dawkins came out of the game, and within four minutes Duke had established a 9-point lead it would never relinquish. Dawkins stayed on the bench until the final minute.

Those who wonder about the complicated relationship between Mike Krzyzewski and Dawkins, and why the latter’s playing time seems to fluctuate from game to game, can put their queries to rest. Against a team with strong, physical guards, he makes the whole team vulnerable. To put it plainly, he’s outclassed.

But Mason Plumlee was not. Playing against a small team, he put Duke on his broad shoulders and began to dominate. I’ve been watching him for three years, and I can’t remember ever seeing him call for the ball with the aggression he showed Wednesday night. At one point in the second half, he was posted up and Austin Rivers refused to feed him from the perimeter. He waved his arm, demanding the ball, but Rivers drove instead. When the play was over and the whistle blew, Plumlee shouted at his teammate, and rightly so. But what happened to the timid klutz who would reliably disappear in big games? Who is this new juggernaut, who has played capably not only in the ACC, but against out of conference giants like Jared Sullinger and Thomas Robinson?

All I can think, as another College Park game goes in the books, is that if Mason had played like this last season, Duke would have won a national title. And if he continues to excel, they might win another before his time in Durham is up.