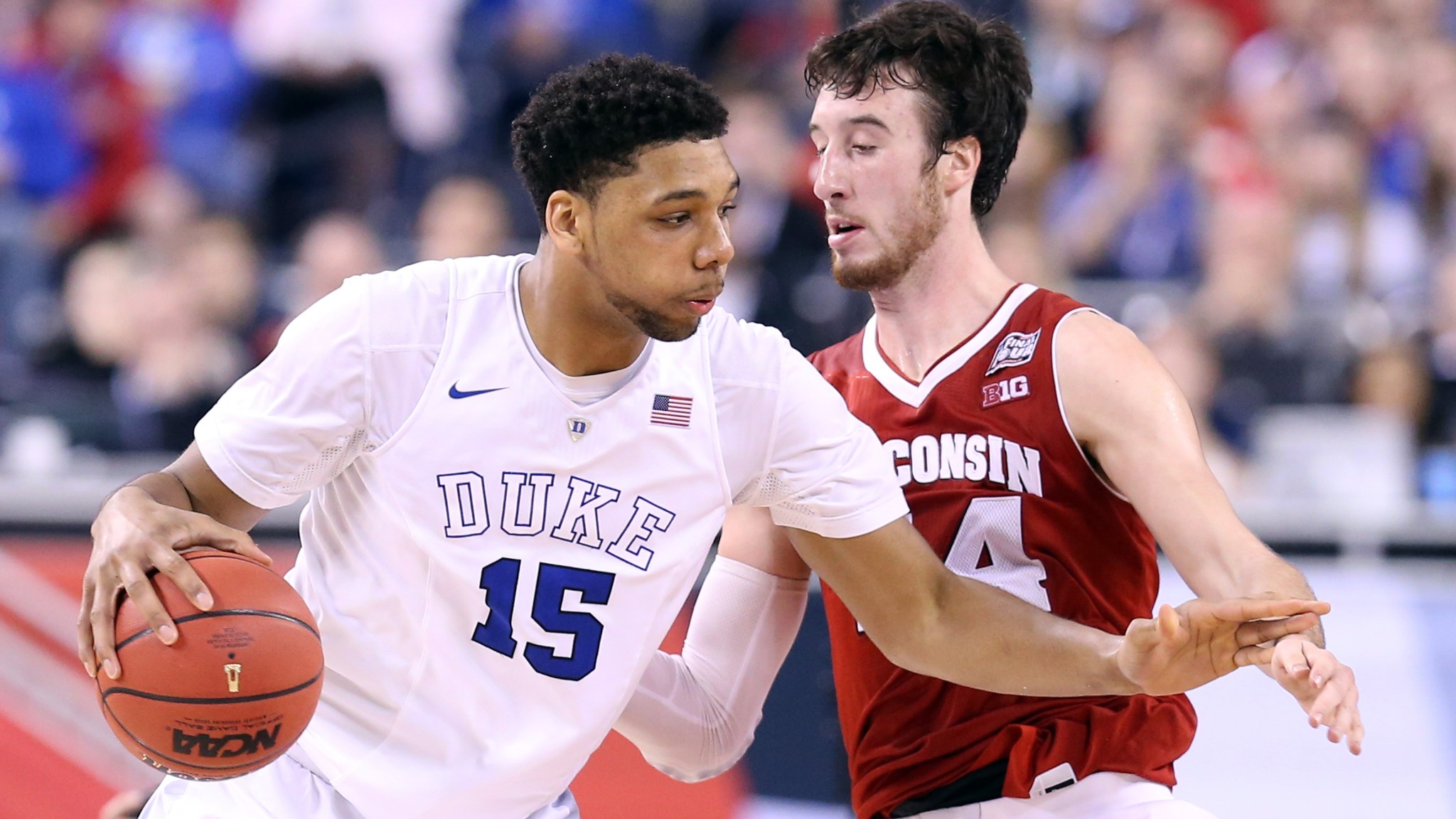 It’s one thing to say overreacting to NCAA tournament games is stupid — I, uh, wrote that last week — but the past few weeks of March Madness provided some of the only games in which we’ve seen Jahlil Okafor play against players his own size. For a guy who was considered the most “NBA-ready” of any star headed to the draft this June, it’s not a great sign that players like Jakob Poeltl and teams like Gonzaga were able to throw Okafor off his game. Monday night’s national title game made him look more ordinary than ever. But again, we don’t want to overreact.

So let’s put on our draft nerd pants and dig into this. Winning in March is supposed to make good players look even better, but Duke’s title run left us with more Okafor questions than ever. In no particular order …

Can He Make Free Throws?

Pretty basic place to start. Okafor shot 57 percent from the line in high school, and that dipped to 51 percent as a freshman this year. Five years is plenty of evidence to suggest Okafor will continue to struggle with this. Aside from the occasional outlier like Tim Duncan, this is one skill that doesn’t really change among big men. Compare the Okafor numbers to other NBA big men this season like Boogie Cousins (78 percent) and Anthony Davis (81 percent) and it reveals itself as a real weakness.

Of course, it could be worse. Andre Drummond and DeAndre Jordan are both shooting about 39 percent from the line, and they’re still very useful. Okafor isn’t in the same category. He’s bad at the line, but not quite awful enough to make “Hack-a-Jah” an NBA reality next year.

Can He Play Defense?

The biggest question. This is the difference between Okafor and guys like Drummond and Jordan. Okafor has a tendency to space out on defense. That part is fixable. But he hasn’t shown an ability to protect the rim or anchor a defense, and he’s too slow to guard quicker big men who float out to the perimeter. Those problems might be harder to solve.

The title game was a perfect microcosm of Okafor’s defensive issues. Wisconsin plays the same kind of four-out style that’s taking over the NBA, and it gave Duke problems for the first 30 minutes. Okafor got into foul trouble, and replacing him with a quicker, smaller big man was probably the best thing that could have happened to Duke. As Mark Titus wrote:

Mike Krzyzewski put Amile Jefferson on Kaminsky, and the game was never the same. Kaminsky stuck with what had worked all game: He tried to score on his man, only now he faced solid defense from Jefferson. Wisconsin’s problems snowballed from there, and seemingly everyone on the team tried to go one-on-one because nothing else was working.

Sitting Okafor ultimately helped Duke get back into the game.

He is long (7-foot-6 wingspan), and his awareness on D will get better. But as teams gravitate toward smaller lineups, big men will either have to stay near the basket to protect the rim or be quick enough to venture out and guard pick-and-rolls. Okafor hasn’t shown he can do either one.

Can He Dominate Smaller Players?

Definitely. That’s how Okafor spent his freshman year in college. He did it to Michigan State in the semifinals (18 points, 7-of-11 shooting), and he did it to San Diego State two weeks ago (26, 12-of-16). He can put it on the floor to beat people, he can knock down face-up jumpers, and his footwork is already better than most NBA big men. As he grows into his body, his offensive skills around the rim will only become more deadly.

Can He Dominate Bigger Players?

He didn’t do it this month. We never got to see him match up with Karl-Anthony Towns, but after watching Okafor struggle to take advantage against Frank Kaminsky, does anyone think it would have gone better versus Towns?

Against Poeltl, Okafor was pushed off the block all night and limited to six points. Against Gonzaga’s front line? He went 4-of-10 from the field for nine points. Against Wisconsin? Ten points and three rebounds.

All of this may sound like nitpicking. After all, this is a 19-year-old kid who just dominated college basketball all year. But given his limitations on defense, his offense has to be so good that defense is an afterthought. In that case, dominating people his size — the kind of guys he’ll face almost every night in the NBA — is more necessity than luxury. Otherwise …

Is He Worth Keeping on the Floor?

This is why the dominance question matters. Factor in the free throw struggles, the quickness issues against shooting big men, the rim-protection issues, and the need for post touches to be effective, and you start to ask whether Okafor will be good enough on offense to make it worth it.

Think about the way teams like the Mavericks and Knicks have had to get special pieces to surround Dirk Nowitzki and Carmelo Anthony with exactly the right supporting cast. The Mavericks did it with Tyson Chandler and Shawn Marion and won a title. The Knicks tried to replicate the formula by stealing Chandler, but it turns out that J.R. Smith on defense isn’t quite the same as Marion. In either case, it wasn’t easy to find the right mix. It hasn’t been easy for the Kings and Boogie. It probably won’t be easy with Okafor.

Look at what happened when Duke replaced Okafor with Amile Jefferson on Monday. Most NBA teams have already made the same trade-off with post players. They’d rather go with quickness and defense down low and flexibility everywhere else. Drafting Okafor means a team forfeits that opportunity.

How Did the Tournament Affect His Draft Stock?

It won’t change things any more than getting shelled in the national championship game hurt Marcus Mariota. People walked away from that game with louder questions about Mariota as the NFL’s no. 1 draft pick, but he’s still got a higher ceiling than almost anyone else in the field, and he might go as high as no. 2. That’s where Okafor is right now.

Would You Rather Have Justise Winslow?

Good god. Winslow made it pretty tempting to say yes here. He tore apart the tournament for the past three weeks. I’ve already compared him to Jimmy Butler, Russell Westbrook, and a grizzly bear. Also, anyone who’s watched the NBA knows that post-up specialists like Okafor are marginalized a little more every year. At the very least, Winslow is going to lock people down on defense and go nuts in transition. As NBA teams go smaller and play faster, both of those skills will become more valuable than ever.

Think about it. Winslow’s tournament happened at the same time Kawhi Leonard turned into a weapon of mass destruction for the Spurs.

Meanwhile, Okafor’s skills are more suited to an NBA that doesn’t exist anymore.

There’s a good chance that the Winslow vs. Okafor question will define the draft the way Okafor vs. Towns was supposed to. Okafor was the obvious choice all year, but after the past few weeks, it’s closer to a toss-up. Who is more valuable between Sane Boogie Cousins or Insane Jimmy Butler? The answer reflects the direction of the NBA just as much as any of the players involved.

So … Is Jahlil Okafor Overrated?

Not exactly. Take the title game, for example. That wasn’t proof Okafor will fail in the NBA. It was just a vivid, nationally televised example of all the questions surrounding his game. There is a worst-case scenario in which building an NBA team around Okafor costs more than it could be worth.

The flip side of that argument is that the NBA is cyclical. Right now, everything revolves around the perimeter, but you don’t draft 19-year-olds for what basketball looks like in 2015. In five years, who knows what the league will look like?

If Okafor continues growing into his game and turns into a 25-12 monster every night, all the questions about defense and free throw shooting will seem overblown. The team that drafts him over Winslow won’t be thinking about Cousins over Leonard, it will be looking for Duncan over Leonard. Given the polish, quickness, and size Okafor has at 19 years old, that’s not entirely out of the question.

Okafor is overrated only if you consider him a guaranteed star. And for most of the year, NBA scouts have done just that. That’s where the tournament served as a wake-up call.

He could absolutely turn into a big man that carries an offense for the next 10 or 15 years. He could batter people down low and slow games down. He could become more and more valuable as guys like Drummond, Cousins, Davis, and Rudy Gobert come of age and usher in a new era of big-man dominance.

He could struggle to dominate NBA defenses, the league could continue to migrate out to the perimeter, and all of his weaknesses would only become bigger problems. For now, the only thing that’s certain is that Okafor isn’t the sure thing we heard about all year. He might be a bigger gamble than anyone.