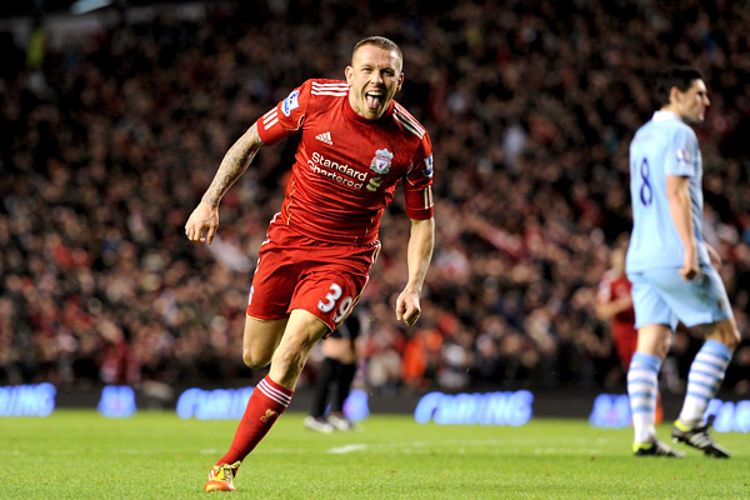 At around 2:30 p.m. EST on Wednesday, Manchester City and Liverpool kicked off the second leg of their Carling Cup semifinal at Anfield. At about 6 p.m., a whistle blew, ending the second leg of Barcelona and Real Madrid’s Copa del Rey quarterfinal throwdown. Four hours of controversial refereeing decisions, silent-film-level playacting and a couple of wonder strikes. In the end, Barcelona went through to the Copa semifinals and Liverpool punched its ticket to Wembley Stadium where it will play Cardiff in the Carling Cup Final. It was exhuasting, frustrating and often glorious. And we learned oh so much …

But, man, he seemed juiced against City on Wednesday night. Despite chronic knee problems, Bellamy ran himself and the City back line ragged, generally being a nuisance and scoring the equalizer that sent Liverpool through on aggregate, 3-2.

Not just other people! As Xabi Alonso can attest, sometimes the Dutch midfielder can get a bit … excited.

But on Wednesday at Anfield, he showed another part of his game with a gorgeous strike from outside the box to put City up, 1-0.

It’s a side we rarely get to see if, for no other reason, he seems ancillary to City’s plans. (Yaya Toure, James Milner and Gareth Barry have been getting the majority of the playing time in central midfield.)

So props to de Jong, though I’d be remiss if didn’t mention Dani Alves’ long-range strike. This definitely made me want to turn on the the Ramones and jump out my window …

Sorry if that doesn’t make any sense. GolTv’s Ray Hudson is making it really hard for me to come up with cool things to say about goals!

Lionel Messi Has A Certain Effect On People

Such as the five Real Madrid defenders who have all eyes on Messi during his dizzying run, missing the red and blue blur that was Pedro, cutting into the box.

But it’s not just limited to players. Supermodel Bar Refaeli, who used to date Leonardo DiCaprio and attended Wednesday’s match at the Camp Nou, seemed mesmerized as well: “I think I just felt a drop of Messi’s sweat. Not showering EVER again!”

Jose Mourinho Should Rehire His Stylist

This past week has been one of the lowlights of manager Jose Mourinho’s Real Madrid career. He may have guided Real into the knockout stages of the Champions League and positioned them at the top of the league table, but losing to Barcelona in Madrid seemed to have undone whatever goodwill he had built up (or revealed whatever shortcomings were being covered).

There were rumors of a Spanish/Portuguese rift in the Real dressing room, and players were anonymously talking to the press; it was all going wrong. And then Mourinho, one of the best-dressed men in sports, the Special One, comes out on the Camp Nou pitch looking like an extra from a Black Moon video with an Armani Exchange gift card. For a man of his sartorial nous, he might as well have not gotten dressed at all.

It might seem silly to harp on what Mourinho was wearing, but it was a bad omen, especially given his team’s capitulation at home last week. In the face of the nattily attired Barca boss, Pep Guardiola, it was as if Mourinho was quitting on all fronts.

However, after Wednesday’s come-from-behind draw, maybe he should start dressing like a ’90s New York MC more often.

Pepe and Sergio Busquets Should Be Shot Into Outer Space

I would seriously take one Clasico a year (instead of the seemingly constant parade we get these days) if it meant these two would get food poisoning and not play. I pride myself on finding some of the more loathsome on-field behavior of athletes somewhat enjoyable. But I seriously don’t know if I can watch another 90 minutes of these two stomping on people’s hands, getting people carded, faking injuries and generally turning Clasicos into shoving matches and soap operas. I actually got so distracted trying to decide who I loathed more that I missed Ronaldo’s goal. Which made me even more mad!

What’s even worse is that it seems like Pepe and Busquets have a kind of Hysterical Cheating Tractor Beam that sucks in their teammates. Cesc Fabregas definitely got hit in the face once every 20 minutes when he played with Arsenal. I don’t ever remember him collapsing to the ground like he had just had acid thrown on him like he did Wednesday. And Real’s Fabio Coentrao is, by all accounts, a pretty straight shooter, but he seemed to be playing football fueled by anger. He looked a lot like Pepe.

This might seem like a lesson that all clubs already know, but don’t be so sure. These days, with the amount of money gained by making it into the Champions League or the amount of money lost by being relegated down a division, going all out in domestic cup competitions is a roll of the dice. So much of what happens in the course of a football season is about maneuvering; making sure your players are rested and ready for the next game, the bigger one.

So it was, regardless of your allegiances, wonderful to see Liverpool boss Kenny Dalglish’s begin to tear up when the final whistle blew at Anfield. Getting into Europe matters, finishing high in the table matters, saving your players from burn-out and injury matters. But silverware matters most. Silverware makes clubs into institutions, it makes seasons memorable and it makes players and managers into heroes.

“Listen, I totally understand there is a balance for the club financially. I understand the top four is massive and at the beginning of the season it is probably the main aim, but as a player I don’t want to be saying I finished in the top four four or five times,” Steven Gerrard said before the match. “I want to look back and say I won the Carling Cup three times. Or four, or five.”

The Carling Cup might be derided as a secondary trophy. The Copa del Rey isn’t La Liga and it isn’t the Champions League trophy. But don’t tell that to the Liverpool or Barcelona fans who so desperately want to see their players lift whatever cups they can get their hands on. Silverware means everything.