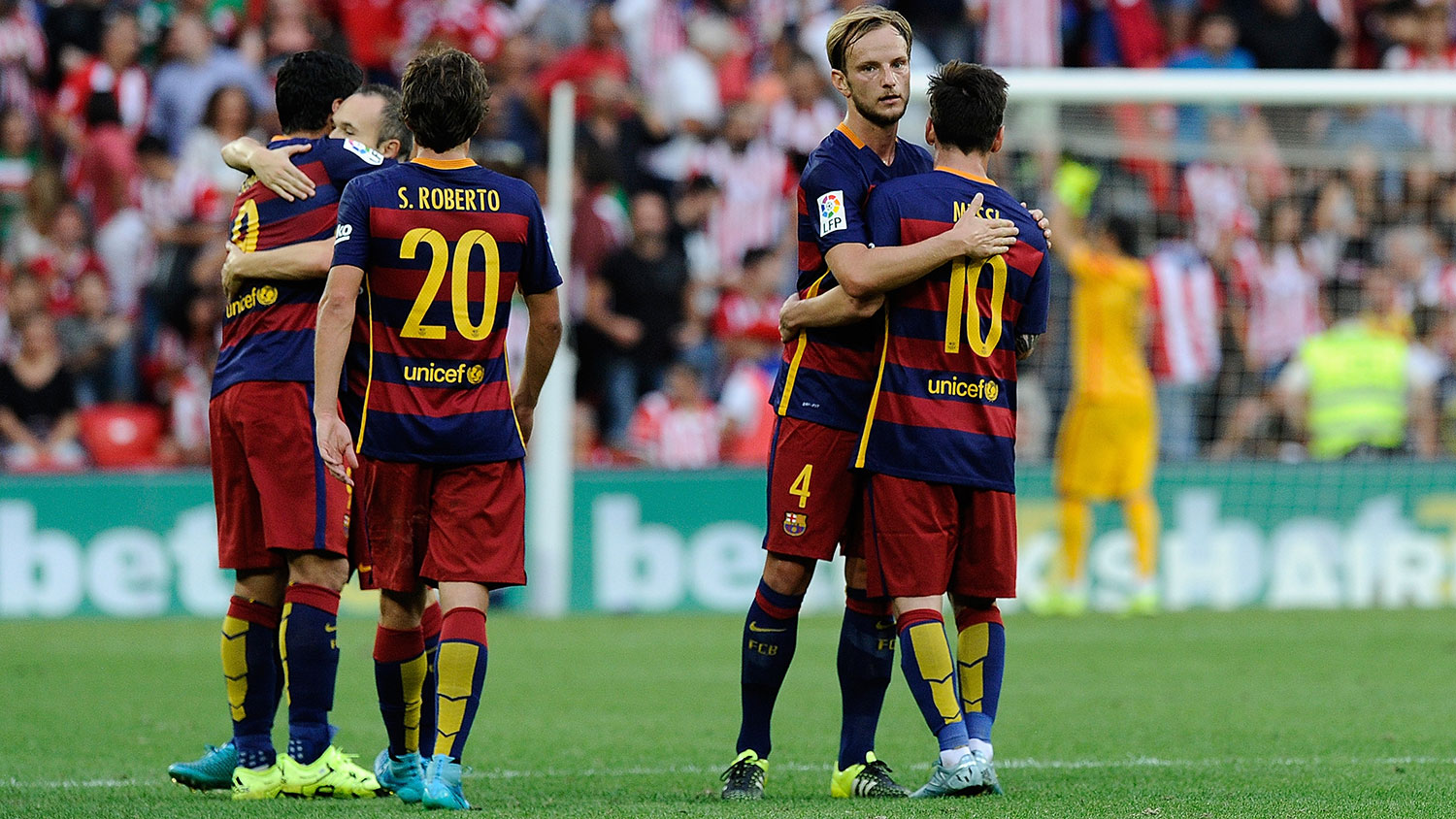 It’s not easy being the best team in the world. At least, over the next four months it won’t be. Despite returning the manager and nearly all the key contributors from last year’s treble-winning team, Barcelona is starting to feel the effects of the year-long transfer ban. Until January, they’re stuck with a thin squad that got even slimmer last Sunday, as right back Dani Alves went down with a groin strain in the first half of a scrappy game against Athletic Bilbao. Barça won, 1-0, but three points don’t change the reality of the rest of 2015: It’s lean times at the Camp Nou.

Yet, the Catalan club should be fine this season. Remember last year? At the beginning of the 2014-15 season, their star-packed front three had yet to form into an all-consuming galaxy: Neymar was recovering from getting kneed in the spine at the World Cup, and Luis Suárez was still suspended for biting someone at the same tournament. In Suárez’s first game back, Barcelona lost 3-1 to Real Madrid at the Santiago Bernabeu. Come early January, they were behind their capital rivals in the table. The club was apparently headed into crisis … and then they won the Copa Del Rey, took first in La Liga, and comfortably conquered the Champions League. When the core of your team is as strong as Barça’s, things tend to work themselves out.

However, it’s beyond that nucleus where things start to get hairy. Pedro, who played whenever either Messi, Suárez, or Neymar weren���t playing, is off to Chelsea. His replacement, Arda Turan, can’t play until January thanks to the transfer ban. And the same is true of Alves’s backup/heir apparent, Aleix Vidal. When the Brazilian went down on Sunday, 23-year-old midfielder Sergi Roberto had to deputize at right back and did fairly well. He and a bunch of other kids are going to have to step up and perform until reinforcements arrive.

About those kids: Last year, Munir (19 years old), Sandro (20), and Rafinha (22) — along with Roberto — saw plenty of minutes over the first half of the season. They did enough to keep the season alive — Barcelona trailed Madrid by one point on January 1 — but they didn’t quite inspire any confidence going forward. This year, with Roberto coming in and Rafinha starting against Bilbao, it looks like they find themselves in the same spot.

For a club that prides itself on its pipeline of homegrown talent, though, shouldn’t some of these kids be the reinforcements and not just the stopgap until older players from outside the club arrive? The current failure of any of them to break through into a role beyond occasional contributor/provider of depth is concerning. The past decade of Barcelona’s success has been built on a core of Lionel Messi, Andres Iniesta, Xavi, Sergio Busquets, and Pedro coming up through La Masia (the youth academy), then Barcelona B (the reserve team), and eventually forming the backbone of a historically great squad. Those stars transformed a team that had been built on high-priced talents like Ronaldinho and Samuel Eto’o into one that was supplemented by acquisitions like David Villa and Javier Mascherano. Barcelona will always buy expensive players; it’s just a question of whether the purchases complement homegrown talent or the other way around.

Other youngsters officially left the club this summer, as 21-year-old Gerard Deulofeu was sold to Everton and 19-year-old Adama Traore to Aston Villa.1 Barcelona B finished dead last in the Segunda Division last year, so they dropped down to Spain’s third division, and they’re now on their third coach in six months, as Gerard Lopez took over for Jordi Vinyals only months after Vinyals stepped in for the long-serving Eusebio Sacristan in February. And all of that’s happening while the club’s serving a transfer ban because of infractions it committed at the youth level.

It’s somewhat ironic that last year’s magical run to the finish helped reelect Barcelona president Josep Maria Bartomeu, given that he is if not responsible for at least complicit in so many of the problems now plaguing the club. Alongside Sandro Rosell, the man he was vice-president under and then replaced, Bartomeu was indicted in a tax fraud case after disguising the true cost of Neymar’s transfer from Santos. And it was under their watch that La Masia committed the violations resulting in the transfer ban. Even more to the point, the man Bartomeu defeated in this summer’s election, Joan Laporta, is the guy who ran the team from 2003 to 2010 and is largely credited with establishing the conditions that allowed Pep Guardiola, Messi, Xavi, and Andres Iniesta to build Barcelona into what it became.2

These are all issues that the club will eventually have to reckon with. For now, though, it’s four months of relying on prospects to help keep the team afloat. While those prospects might be underwhelming, and a constant reminder of larger problems, they should be enough to get the job done. Come January, the Catalan giants will be near — if not at — the top of the table, gearing up for the knockout stages of the Champions League. This team should be as good as the one that blew the doors off of Europe in last year’s second half, and it might even be better. If nothing changes, the problems will eventually catch up, but Messi provides a pretty good distraction, doesn’t he?

College Football Identity Crisis: Does Anyone Want to Coach Wisconsin, You Guys?