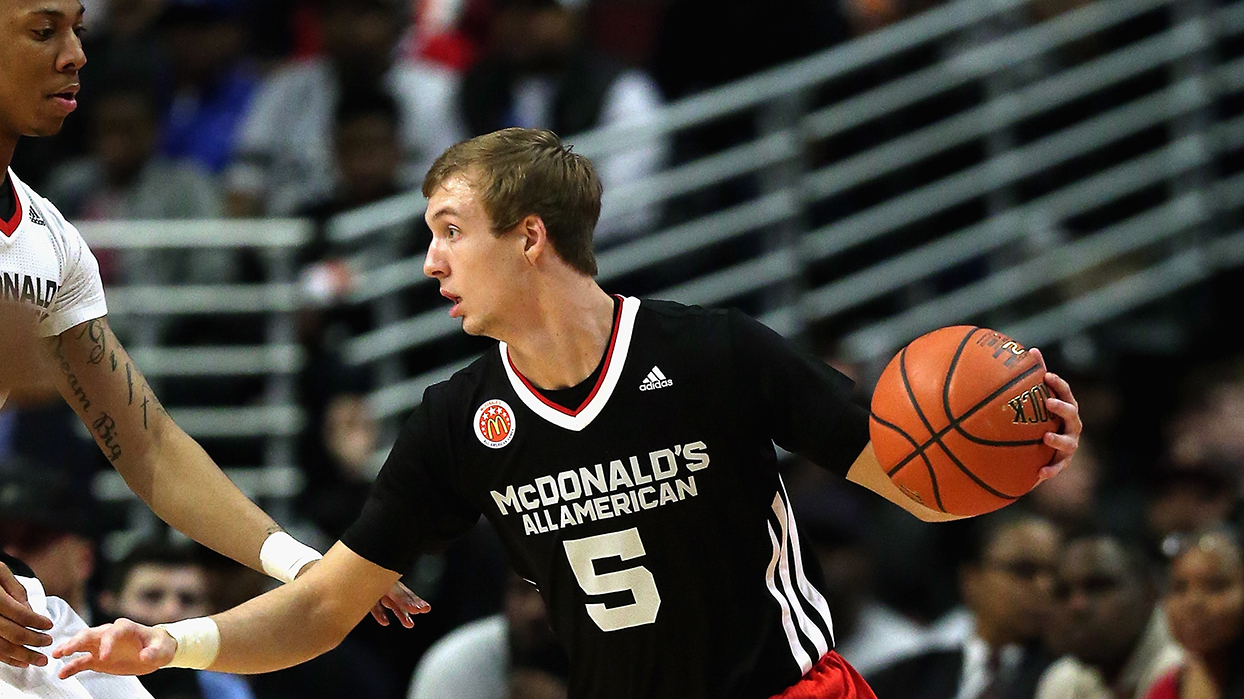 It’s a Friday night in early February, just a few minutes into the junior varsity boys basketball game, and the gymnasium at Franklin High School is already standing-room only. The 7:30 p.m. varsity tilt sold out before 5:30 p.m., with locals lining up outside the school as early as four o’clock to score tickets. This particular Southwestern Buckeye League hoops matchup between the Franklin Wildcats and Brookville Blue Devils isn’t generally prone to such fanfare, but over the years it also hasn’t featured many players like Franklin senior Luke Kennard, a 6-foot-5 Duke University commit who’s just 38 points from passing LeBron James for fourth on the Ohio High School Athletic Association career scoring list. Considering that the kid averages about 40 a game, there’s a good chance he’s doing it tonight.

A Midwestern town of less than 12,000, best known for its freight-rail commerce, Franklin, Ohio, sits just off I-75 between Cincinnati and Dayton. It’s Salt of the Earth, USA — a John Mellencamp song with outlet malls — and it’s tough to overstate what an athletic anomaly Kennard is for both the town and the school. Prior to Franklin’s string of four straight league hoops titles that began with his freshman season, the program had won only one since 1992. He’s the reigning Ohio Mr. Basketball, a member of the 2014 USA Basketball Under-18 FIBA Championship team, a 2015 McDonald’s All-American and Nike Hoop Summit selection, and he ranks 23rd overall on the ESPN 100 list of top high school recruits. Before he decided to focus solely on basketball as a senior, he even won the state’s 2013 co–Division III offensive player of the year award as junior quarterback of the Wildcats football team.1

Kennard’s athletic prowess is obvious the moment he takes the floor. In addition to having a few inches of height and pounds of muscle over everyone else, the lefty glides around the court, able to score or set up easy looks at will — dribbling to his desired spots unfettered, driving to the hoop with ease if his man dares to pressure him, whipping crisp passes to wide-open teammates when he draws extra defenders. His first bucket of the night comes on a step-back jumper preceded by a crossover that puts the poor kid attempting to guard him on his ass. Another sequence includes Kennard banking in a right-handed shot from the block while absorbing a foul, hitting the subsequent free throw, then stealing the inbound pass and dropping in a layup. He still messes with his hair at every dead ball and is enamored with behind-the-back passes, but he’s clearly a god among insects on the court. He drops 17 points in the first quarter, and no one in attendance seems all that impressed.

A few days before the game, anticipating Kennard’s usurpation of LeBron’s fourth-place spot, a rather unprepared reporter asked James about “a kid in Cincinnati, I forget his name” who was close to breaking his high school “all-time scoring record.”

Late in the third, Kennard has 36 and is just two shy of James, the latter number displayed on a whiteboard in the student section just in case it slips his mind. He dribbles across the center stripe, drifting to his right before stepping back and pulling up from 23 feet, the crowd detonating as the ball goes through the hoop. He floats back down the floor, cracking a rare in-game smile, pushing his arms down toward the court in homage to LeBron’s signature celebration.

“I’m not a LeBron or anything, not even close,” says Kennard after the game, a last-day-of-school smile plastered across his face, “but just to be in the same category as him, I’m really blessed to have that opportunity.” He did get to meet James once, at the 2013 LeBron James Skills Academy a few summers back. The two only spoke briefly, but the King has Kennard’s endorsement: “In my opinion, he’s the best player in the world.”

After Kennard details his plans to celebrate with teammates at the local A&G Pizza House, someone asks if he has any idea who’s next on the points list. Kennard, who finished with 44 points (2,652 for his career) in a 90-64 blowout, shakes his head.

In 1993, Geno Ford finished his career at Ohio’s Cambridge High School with 2,680 points — 34 more than LeBron James. “That’s OK,” says Ford, the current head coach of Bradley University in Illinois, when made aware of Kennard’s answer. “A lot of people wouldn’t know that.”

Ford has spent the majority of his life in the Ohio basketball scene, playing four years at Ohio University and serving as head coach of three state colleges: Shawnee State, Muskingum, and Kent State. He remembers watching Kennard in summer AAU ball as a soon-to-be freshman at Franklin when he was the coach at Kent State, encouraged by a friend who thought Ford should offer the kid a scholarship.

“When I saw him the first time, I said [to my friend], ‘Great tip. The closest he’s coming to Kent State is, right now, a four-hour drive. That kid’s playing at Duke.’ Kind of bizarre that’s how it turned out.”

Ford also witnessed — along with the rest of the Western world — the LeBron-hype extravaganza at St. Vincent–St. Mary High School in the early 2000s, an occasion that marked the start of an incredible decade-plus run of individual Ohio high school basketball players. Whether by happenstance or a James-inspired renaissance, the state has since produced a slew of notable NBA lottery and first-round draft picks, including O.J. Mayo (Ohio Mr. Basketball 2005 and 2006), Jared Sullinger (2009 and 2010), Trey Burke (2011), C.J. McCollum, Kosta Koufos, and Adreian Payne, among others.

“The whole thing starts with LeBron,” says Ford. “Ohio has really had a great run the last decade, just an unbelievable run of players that the state has produced.”

Kennard is presumed to be the next in line. To start, there are the obvious LeBron parallels — the King James AAU team; playing under coach Mike Krzyzewski at Duke next season, who coached James on the Team USA Olympic squad; and winning back-to-back Ohio Mr. Basketball honors in 2014 and 2015, an impressive feat that still leaves him shy of LeBron’s record three consecutive awards from 2001 to 2003 — all of which helped garner attention from places like ESPN and Sports Illustrated merely hours after Kennard passed LeBron on the state’s points list. There’s also his own pedigree: He started playing AAU in second grade, received his first scholarship offer from the University of Dayton before his first day of high school, and recently finished his career at Franklin with a record of 86-11, endless awards and recognitions, and nearly 3,000 total points. Admittedly, high school points and big-time college scholarships don’t guarantee Kennard NBA success, or even a roster spot — Jon Diebler sits atop the Ohio scoring list with 3,208 career points, started 115 games during his four years at Ohio State, and is currently playing in Turkey. But regardless of where the rest of Kennard’s career goes, his high school achievements rank among the Buckeye State’s best.

“That the best college program in the country with the best coach in the country wants him on their team says enough about how he should be regarded,” says Ford. “He’s one of the best all-time in the state. I think he certainly has a chance to be a pro, but those things are hard to project over that much time.”

Not surprisingly, Kennard’s high school coach is a bit more bullish. “I’ve seen him play against the best of the best, with Team USA and AAU, and I haven’t seen many guys who can guard him,” says Brian Bales. “I think he’s going to be an American favorite at Duke, catch the nation on fire. I just believe in him, his talent and his work ethic. I think he can play at the next level. I really do.”

Kennard is a bona fide celebrity in Franklin. He’s constantly signing autographs and posing for pictures. Roadside signs around town — now in need of an update — declare Franklin the “Home of Luke Kennard, Ohio’s Mr. Basketball 2014.” He served as grand marshal of the city’s annual Fourth of July parade last summer. And by all accounts, he has handled everything as a very humble, mature, levelheaded young man. Despite what Bales says, opposing ACC crowds are going to hate him next year.

“He beat LeBron James’s point record on Friday night,” says Bales a few days after the fact. “On Saturday, I took my son to an 8-year-old’s birthday party — they had a bouncy house in the backyard, all that. I walk around back, and Luke’s in the bouncy house hanging out with a bunch of the neighborhood kids.”

A week after the Brookville game, Franklin is back on their home floor for senior night, in front of yet another standing-room-only crowd. There are no records to break tonight — Kennard passed Ford earlier in the week to move into third on the points list —  but it’s the last chance for the seniors to play in front of their home fans.3

Prior to tipoff, seniors from each winter sport have their names announced over the P.A. system as they walk out to midcourt, arm in arm with parents and grandparents and siblings, a high school ritual unchanged since the Mesozoic era. Kennard is announced last, his mother dabbing her eyes with a tissue. A highlight video of the basketball team set to “One Shining Moment” is projected onto the wall.

The game is quickly a foregone conclusion as Franklin cruises to a 104-43 victory. Kennard records a triple-double (39 points, 15 boards, 10 assists) and throws down one of the nastiest dunks you’ll ever see in a high school gym. When he exits the game midway through the fourth quarter, he gets a standing ovation from the crowd and a massive hug from Bales. Confetti falls from the rafters after the final horn while players and coaches cut down the nets in celebration of a fourth straight league title. Kennard stands patiently at one end of the court as children, classmates, adults, and even a uniformed police officer wait in line for pictures and autographs. After about 45 minutes, he’s finally able to head for the locker room.

“It was a great night, an emotional night,” he says, pulling pieces of red, white, and black confetti from his jersey. “That might top it all.”

Someone asks if he has any idea what’s next for him. Kennard shrugs his shoulders. “Probably go to A&G Pizza, just have a good time.”

Justin Williams (@Williams_Justin) is an associate editor at Cincinnati Magazine.