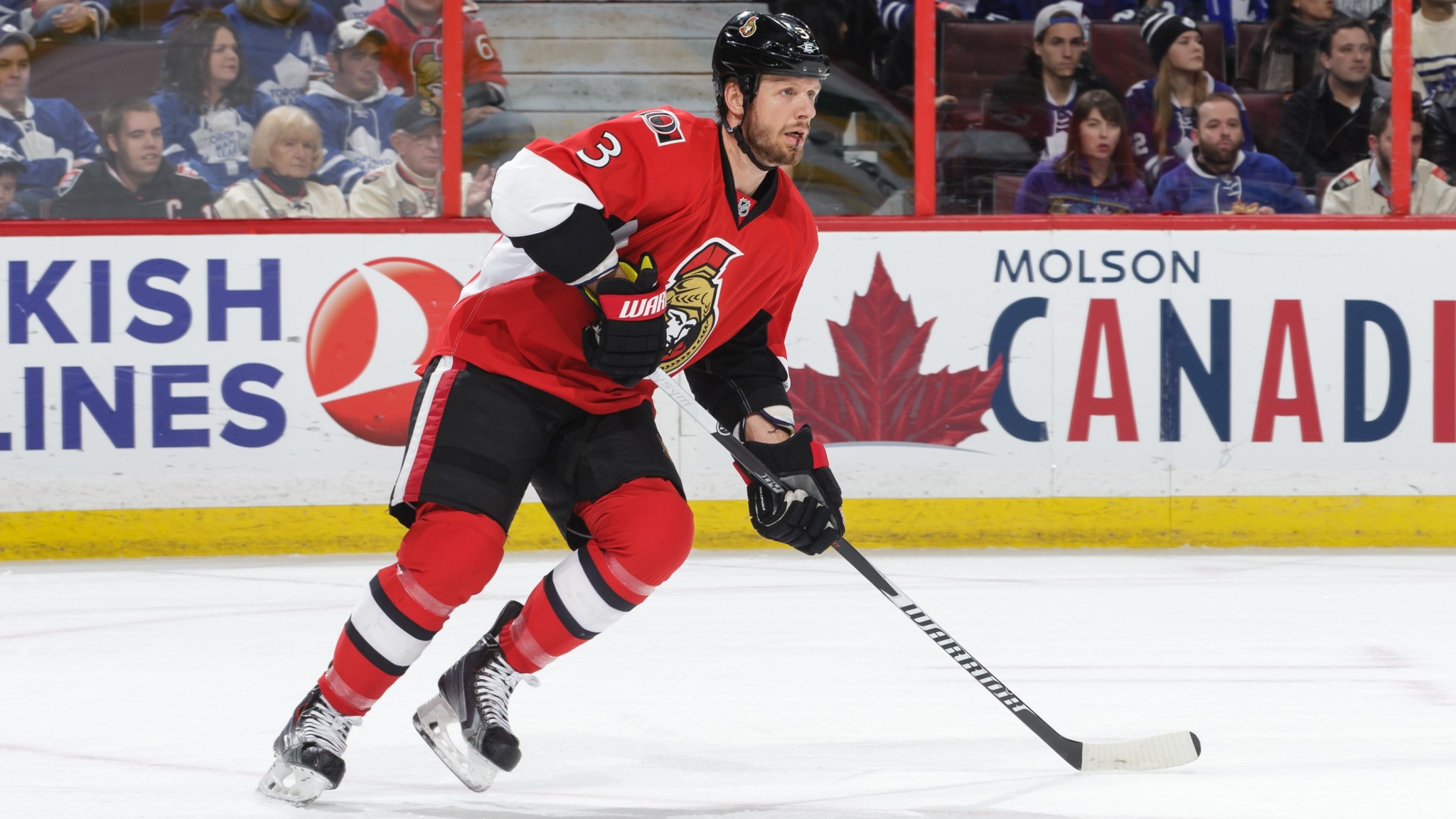 Bartosak is the goaltender for the AHL’s Manchester Monarchs, but don’t feel bad if you don’t know who he is. We all don’t know things sometimes. For example, on Saturday night, Bartosak apparently didn’t know he was in a shootout, and he still managed to make the save.

Our Goalie couldn't hear the whistle because of crowd noise. The funniest thing I've seen in person at a hockey game. pic.twitter.com/8Cwzzssso5

That would be former NHLer Joey Crabb getting denied by a goalie who doesn’t know Crabb is there. In related news, I think I’m starting to understand why Alexander Ovechkin hit that slump a few years ago.

The Rangers forward spent most of the season with the Sharks, and gets in a nice dig on former teammate Brent Burns.

Or maybe it’s a dig on Chewbacca. Tough to say, actually.

The first star: These Flames fans

It’s getting awfully hard to say something that’s going to hurt an Oilers fan. “You suck”? Yeah, they know. “Your team is embarrassing”? Nothing they haven’t said themselves. But this … this is just cold.

You took it too far, Calgary. Words hurt.

The issue: In overtime of a crucial game, a shot by Senators defenseman Marc Methot appeared to go through the net, but the play wasn’t reviewed and Ottawa ended up losing.

The outrage: They didn’t show a definitive replay in time because it’s a conspiracy to keep the Senators out of the playoffs!

Is it justified? No, because as we later found out, the puck didn’t go in after all. And the conspiracy angle was almost inconceivably stupid — we’re supposed to believe that Sportsnet, which paid billions for Canadian TV rights, wants to keep a Canadian team out of the playoffs? Even for hockey fans, that’s just dumb.

But all of that said, in real time Methot’s show really did look like it went in — I was watching the game, and I remember thinking, They should review that. But they didn’t, and you can understand why. After all, what’s the league supposed to do, call down for a review every time a shot just misses? Games would last four hours.

It’s a tricky situation, and seeing it play out like it did makes it feel inevitable that the league is eventually going to get burned here. Someday, a shot really is going to go through a net, nobody will notice, and we’ll realize only later that we missed a goal, at which point all hell will break loose. But I’m honestly not sure what the league can really do about it, other than hope that it doesn’t happen at a crucial time.

So let’s all thank Marc Methot. He wasn’t the victim of a grand conspiracy, but he gave us all a nice dress rehearsal for when the real thing happens someday down the line.

On Monday, the Duke Blue Devils beat Wisconsin to claim their fifth NCAA basketball championship. I’m told that’s some sort of a big deal. So for this week’s obscure player, I guess we’ve really got only one choice: Depression-era defenseman “Duke” Dukowski.

Dukowski’s full name was Wladislaw Laudas Jozef Dukowski, which has apparently caused some cognitive dissonance over at his Wikipedia page. He was a Saskatchewan boy who made his debut with the Blackhawks in 1926, playing parts of three seasons before being claimed on waivers by the New York Americans in 1931. Three seasons later, the Americans lent him back to the Hawks, and he was later sold to the Rangers, where he finished his NHL career. He ended up playing an even 200 NHL games, recording 46 points. In a detail that probably amuses only me, Hockey-Reference.com lists fellow Obscure Player Bruce Shoebottom as one of Dukowski’s all-time most similar players.

By the way, one of Dukowski’s teammates on the Blackhawks was fellow defenseman Roger Jenkins, whose claim to fame was being the first-ever NHL player from, you guessed it, Wisconsin. It’s probably safe to say that Duke was better, at least in the big games.

NHL Central Scouting released its final rankings of draft-eligible prospects on Wednesday, and to nobody’s surprise, they were highlighted by Connor McDavid and Jack Eichel. You can find the full rankings here.

There are good reasons for that four-list approach. Few scouts get to see both North American and international players for extended periods, so a direct comparison is tricky. And goalies are notoriously hard to project — heck, we barely know which actual NHL goalies are any good after hundreds of games, so ranking them as teenagers falls just short of guesswork.

But I don’t care about that, because I want one big list. The current approach just looks silly — imagine an NFL draft board where quarterbacks were separated out from everyone else. More important, the main purpose of these rankings is to look back at them years later and get retroactively furious over whom your stupid team passed up, and that’s harder to do with multiple lists. I don’t know much about Future Me, but I’m pretty sure he’s angry and lazy. Also, probably bald. Let’s help the guy out.

Sure, putting everything into one big list would probably render the rankings inaccurate. But they’re already inaccurate, because they’re pre-draft rankings, and, again, trying to project teenagers is already one step short of voodoo. We might as well go all the way. Do it, NHL. Give us the big list.

Awesome and/or Horrific Old YouTube clip of the Week

Last night, the Jets clinched a playoff spot, meaning that postseason hockey will be returning to Winnipeg for the first time in almost 20 years. Despite entering the season with a roster that most experts wrote off as substandard, the team has battled through injuries, controversy, and a wild-card race against the defending champion Kings to emerge with an unlikely playoff berth.

It’s an inspiring story, and it feels like the sort of thing we should take the time to recognize. So that’s what we’re going to do this week, with a moving tribute to Winnipeg Jets hockey.

• This video is from 1985, but beyond that I have to admit I have no idea where it’s from or who made it. It was posted to YouTube eight years ago, which is fun because the comments section is mostly sad people wishing the Jets would come back someday.

• Oh, by the way, remember all those heartfelt reasons I listed up above for choosing this video? All lies. I just wanted to get this song stuck in your head for the rest of the weekend. And now it is!

• As we covered a few days ago, the 1984-85 Jets were (and still are) the best team in Winnipeg’s NHL history, so we can forgive their fans for being a little bit excited back then. No doubt this video will feature plenty of incredible saves, hits, and goals!

• Like many highlight videos of the era, this one seems to have been made from about four actual games. That’s fine, though, because this is 1985, so that will translate to roughly 400 goals scored.

• One fun thing from any 1980s highlight video: Watch the utter panic that sets in on any standup goaltender who has to try to control a rebound. They inevitably lose all control of their limbs and just start flailing like Wile E. Coyote going off a cliff. You can almost hear their internal monologue: “Oh no, the puck actually hit me, THIS HAS LITERALLY NEVER HAPPENED TO ME BEFORE.”

• OK, I’ll admit that the first 25 seconds of this video aren’t very good. But the lyrics are about to kick in, and now we’re taking it up. Yep, feel the power. In fact, I’m tempted to say that we’re going to fly tonight.

• “I don’t know, I feel like all the airplane metaphors might be too subtle. Will they realize we’re talking about the Jets? Should we yell ‘JETS!’ every few seconds just to make sure? We probably should.”

• Full credit for synching “raise your hands” with a Dale Hawerchuk goal celebration. That is some pro-level montage work.

• It takes us all the way until 1:05 to get to our first hit that would merit a suspension in today’s league, which I think may be a record for one of these highlight packages. And for the second week in a row, it’s a Quebec Nordique getting two-hand punched in the head. Stop making everyone do that, Nordiques players.

• By this point you’re probably realizing that roughly 80 percent of these highlights involve Hawerchuk. He really was awesome, a no-argument first-ballot Hall of Famer, but he had the misfortune of playing at the same time as the two greatest centers ever (Gretzky and Lemieux), plus two more who are at least in the discussion for third place (Yzerman and Messier). I’m trying to think of Hawerchuk’s equivalent in any other sport. Dominique Wilkins? Jim Kelly? Kurt Angle? I’m stumped.

• Sorry, got lost in the music there for a second. You know how it goes.

• Note that at the 1:45 mark, one of our highlights — a play that needed to be counted as being among the very best of the entire season — is of a Jets goalie making the save on an unscreened slap shot from the top of the faceoff circle. The 1980s were so fun.

• Solid fist-pump/mustache combo there by Tim Watters there.

• By the way, the guy wearing no. 8 who shows up a few times in these highlights is future NHL coach Randy Carlyle. He’s not wearing a helmet, because keeping your brain cool is important for preventing concussions, and I swear I did not just make that up.

• Our final clip is of Hawerchuk scoring on a 2-on-1 against the Oilers in what I feel confident saying was a losing cause, since I have no recollection of the Jets ever beating the Oilers during the entire decade.

The 1984-85 Jets went on to beat the Flames in the first round of the playoffs in what would be the first of only two playoff series wins in Winnipeg’s NHL history. They’ve never made it past the second round. It remains to be seen whether this is the year they can take it higher.