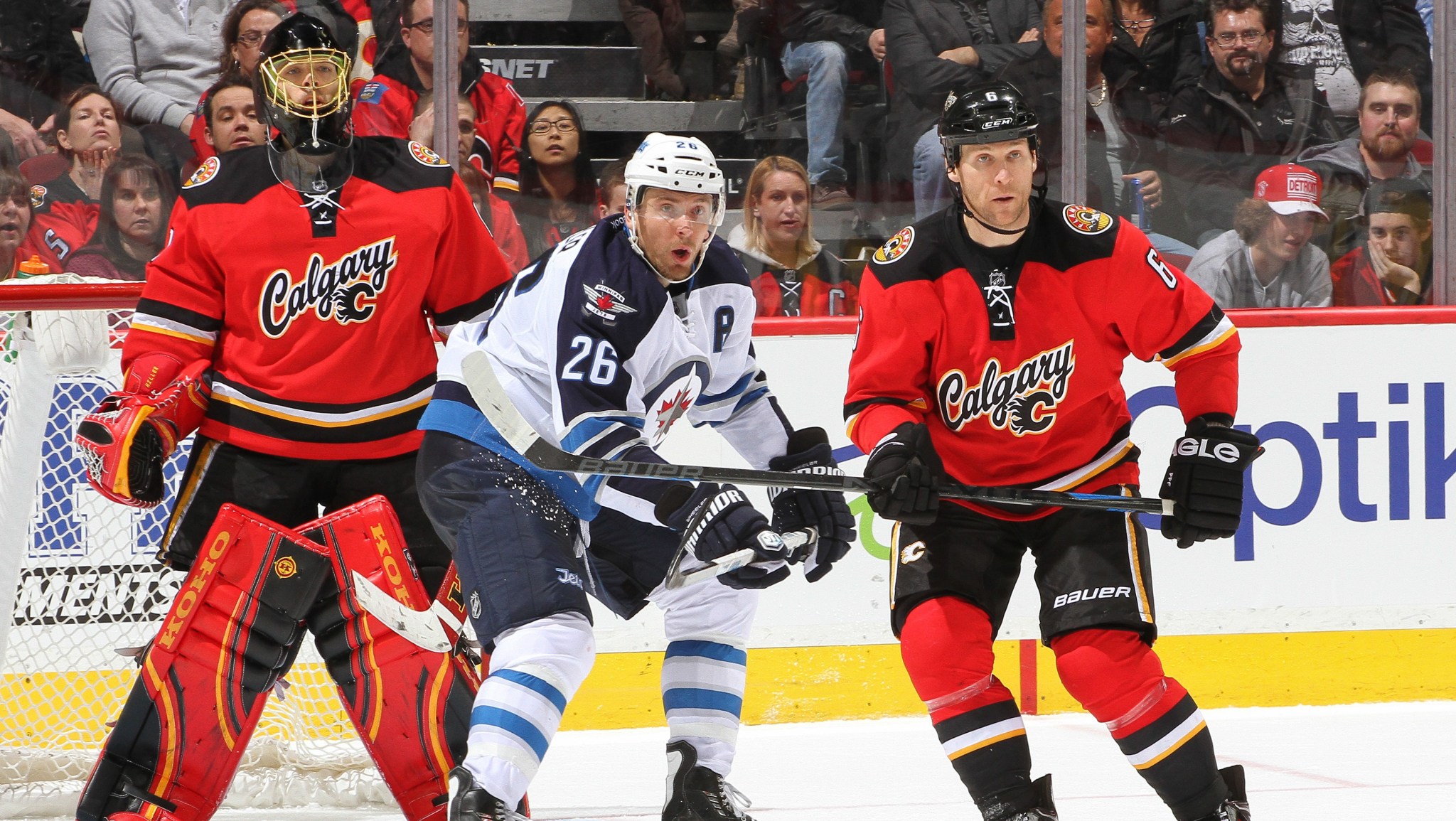 The third star: Barry Trotz tells a story about a milk jug

Admit it, Trotz is the only NHL coach you can picture this happening to.

Trotz's full answer on April Fools' Day. Again, though, not a practical joke. Just a dude crashing through a crate. pic.twitter.com/BUffVqyoWs

The second star: Patrik Nemeth keeps his eye on the puck

I’ve never seen a play go from, “Oh no, that guy’s blind now,” to, “I’m pretty sure it’s OK to make pirate jokes,” quite so quickly.

When you accidentally show up to work wearing part of the uniform from your other job they don’t know about.

Hey @NHLBlackhawks any comment on the rumors that Marian Hossa is the batman? Pretty clear evidence here…. pic.twitter.com/tQwDvoydRW

Nothing makes hockey folks happier than being outraged about something relatively unimportant. Each week we’ll pick one topic that fans are complaining about and try to figure out if the uproar justified.

The issue: The NHL’s race for the final playoff spots is coming right down to the wire.

The outrage: There are some scenarios, like this one, in which two teams who were playing each other could both make the playoffs simply by forcing overtime and triggering the loser point.

Is it justified? Yes, because the loser point is an abomination. I know, I know, I’ve beaten this topic into the ground over the years. But this is the time of year when this stuff really does matter, and it’s never going to change until enough fans get mad and stay mad about how ridiculous this all is.

Nobody’s worried that we’re actually going to see two teams blatantly conspire for overtime; we won’t get two teams standing around for 60 minutes until regulation ends. But teams absolutely do play for the loser point, and have been for years. And the loser point is already helping to determine who gets into the playoffs — look at the Kings, staying close to the Flames thanks to “earning” seven more loser points.

And what’s the benefit? The loser point doesn’t make playoff races closer (it just looks that way because the salary cap created more parity). It doesn’t keep more teams in the race longer (it probably does the opposite). It just artificially inflates point totals around the league, almost completely at random. And occasionally, that helps determine who wins the Stanley Cup (which happened in 2012).

The league seems to have no appetite to change the current system, and it’s not hard to see why — this kind of stuff gets decided by the league’s general managers, and that’s exactly the group that benefits most from inflated standings and a false perception of success. There have been calls for the league to fix the system — including this Nate Silver piece, just this week — and a handful of NHL GMs have fought the good fight. But the reality is that the NHL is never going to change it unless the rest of us keep pointing out how ridiculous it makes the league look. And there’s no better time for a reminder than now, as we watch a playoff race that could be decided by a team being able to win by losing.

(Thus ends “Sean yells at clouds about how stupid the NHL is” week on Grantland. The next one is scheduled to begin tomorrow.)

Tanking for the first overall pick has been a hot topic all year, but let’s keep in mind that the top pick isn’t always worth very much. Take the case of this week’s obscure NHL player: Kings defenseman Rick Pagnutti. We’re bending the rules for him, because despite being the first overall pick in the 1967 draft, Pagnutti never actually made the NHL.

Pagnutti was a tough defenseman with a big shot in junior. But he couldn’t crack the lineup in L.A., even on an expansion team that struggled badly most years. He spent 10 seasons in the minors and was named the IHL’s best defenseman in 1972. Still, the call-up to the big leagues never came.

That makes Pagnutti sound like an epic bust, but his story wasn’t all that unusual back in the early days of the draft. Only one of the top 15 picks in 1967 made it to the NHL. And two more players, Andre Veilleux and Claude Gauthier, went first overall in the ’60s without playing a single NHL game.

As for Pagnutti, he retired in 1977 to become a firefighter. He was inducted into the AHL Hall of Fame three years ago.

This week’s debate: What do the current playoff matchups look like?

In favor: Well, obviously it’s early and things are still shifting around. But if the playoffs started today …

Opposed: … fans would be really confused!

Opposed: It would be really unusual if the playoffs started today. Because, you see, the season isn’t over.

In favor: Yeah, we know. It’s a figure of speech, because we’re trying to discuss …

Opposed: If the playoffs started today, the owners would sure be mad about all that lost ticket revenue!

Opposed: If the playoffs started today, the guy who made the schedule would be all like “Whhaaaa?”

In favor: Stop that.

Opposed: If the playoffs started today, you’d look at your calendar and … um … you know … you’d be like … that’s odd.

Opposed: Because the playoffs do not, in fact, start today!

In favor: Are you done?

In favor: Good. Then stop interrupting every conversation about playoff matchups with your “but the playoffs don’t start today” shtick. We get it. We’re all very much aware of when the playoffs start. We’re just trying to discuss potential matchups, like sports fans do, and we don’t need constant nagging from some pedantic scold making the same joke over and over.

In favor: You’d already know that if you had a shred of self-awareness.

In favor: [Beats Opposed over the head with a hockey stick.]

The final verdict: If the playoffs started today, I could go on summer vacation two weeks early.

With the season almost over, everyone’s talking about who’ll win the various awards. There are plenty of questions left to answer, such as: Can Carey Price win the Hart? Will it be unanimous? Can we assume that Habs fans will burn down the voters’ homes if it’s not? And do Habs fans have access to my address?

Of course, the hockey world loves awards. So this week, let’s look all the way back to 1987, when Hockey Night in Canada decided to take a break from the playoffs and hand out a few of its own.

• We start off with Ron MacLean, looking young and happy to be alive, because at this point he’s been working with Don Cherry for only a few weeks. He introduces the concept and throws to our highlight package.

• And the award for Best Freakout By A Fan In A Denim Jacket goes to: that guy. Be honest, have you ever worn a denim jacket and not felt that happy? You have not.

• MacLean mentions that our judges for these awards are referees Denis Morel and Bob Hall, which is weird because unless I’m missing something there’s no actual joke there. Wait, are these real awards? Like, did the CBC actually make two referees watch blooper reels and vote on the winners? Did my tax dollars pay for this?

• Our first award goes to linesman Leon Stickle, who eats it hard after a player accidentally kicks his skates out from under him. “Wait, you can do that?” mutters Tobias Enstrom.

• The best goal goes to Steve Yzerman, who brilliantly dekes around the Blackhawks defense before flipping a backhander in the general direction of the net, which of course goes in because this is 1987 and every goaltender is 5-foot-2 and paralyzed from the waist up.

• Best assist goes to Wayne Gretzky for … a drop pass in the neutral zone? Yeah, I’m guessing this was the point that Hall and Morel realized this was a waste of time and just started pointing to random clips and saying “he wins.”

• Pat LaFontaine’s quadruple-overtime goal in the Easter Epic gets a mention. Bob Mason’s exhausted drop to one knee is still one of the saddest moments in playoff history. The good news is that Mason is now the goaltending coach for the Minnesota Wild, so he hasn’t had to experience a goal against since mid-January.

• Next up come the saves, featuring Kelly Hrudey stealing my patented “accidentally pass the puck to the other team’s forward” move from NHL ’94.

• I’d make fun of that Ken Wregget save, except it was pretty much the highlight of the decade for Maple Leafs fans — at least among moments that didn’t involve Wendel Clark sitting in the penalty box picking bone shards out of his teeth.

• “Fred Astaire of the Stairs.” Oh good, we hadn’t had a terrible Ron MacLean pun yet. I was getting worried.

• You know, the clips of creepy bodypaint guy and mini-Pharrell kid are cute, but my favorite is the striped-shirt guy in the middle of the Winnipeg Whiteout who’s realizing he’s made a terrible mistake.

• And here comes the mandatory sequence of angry coaches. Remember when we all thought John Tortorella was cranky? Yeah, he was Mister Rogers compared to 1980s coaches.

• Oh, nothing, just the cast of Three Men and a Baby wearing Leafs jerseys. Wait, Steve Guttenberg is a Leafs fan? We’ve had the Stonecutters behind us all this time and we still can’t win anything?

• Bob Froese with one of the great dives of all time. That’s the worst acting ever by an NHL player that didn’t end with a rendition of Waikiki Hockey.

• And we’re back to angry coaches, as John Brophy and Jacques Demers try not to kill each other while Wendel sits awkwardly in the background wondering why mommy and daddy are fighting.

• We close with the big hits, which means we get to play a round of “How many games would that be today?” Our winner is Whalers winger Paul MacDermid, who charges into a defenseless Nordique and two-hands him in the mouth. Today, that’s 14 games. In 1987, it was hilarious.

And that’s it for our awards. And since I don’t really have anything to close with, I’d just like to say that the CBC really needs to bring back those sweet blue blazers. So there you go, hockey fans, we have our priorities for the next few years:

We can do this.

In Spite of Everything, the Clippers Are the Second-Best Team in the NBA

The NCAA and the Mess in Indiana