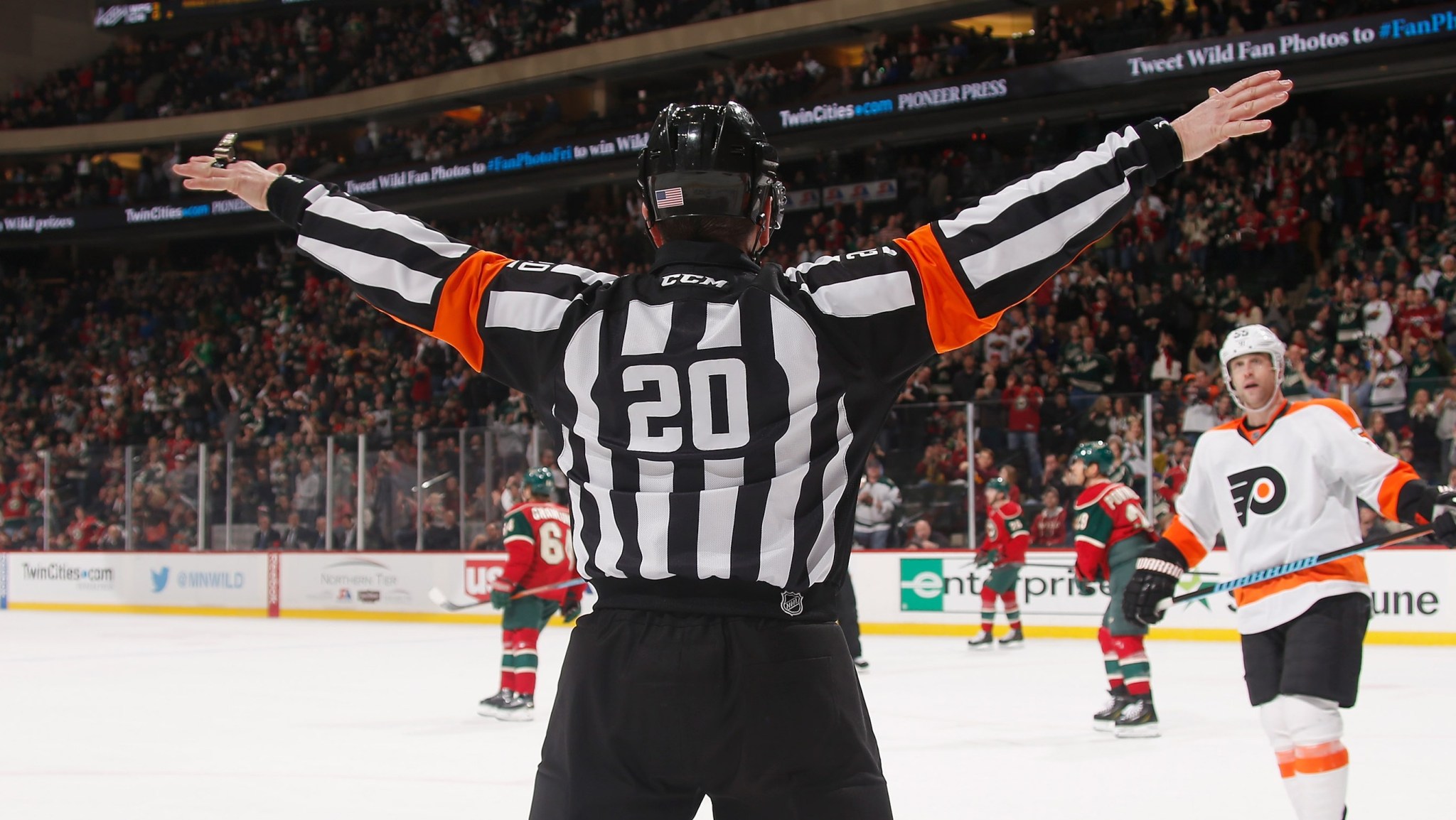 Some tough guy, picking on a Maple Leaf. Next time, try going after someone with a better win-loss record than Iron Mike Sharpe.

The first star: This Blues fan

I assume she’s still trying to figure out that whole Martin Brodeur signing.

This Week’s One Star of Awwww …

Recognizing the NHL personality who produced the most adorableness.

Hockey moms are the best.

(And no, this is not the first time she’s done this.)

The issue: The NHL suspended referee Tim Peel after he met with a reporter last week.

The outrage: Nobody’s quite sure what Peel did wrong.

Is it justified? Let’s start with the background. Peel has been an NHL ref for 15 years, and over that time he’s drawn occasional criticism from fans and media. Last week, he arranged to meet with one of his fiercest critics, Yahoo Puck Daddy blogger1 Greg Wyshynski. They had a good chat, and Wyshynski later tweeted a photo and wrote a post about the discussion.

That seems like a nice enough story of a guy facing down his critics and clearing the air. But apparently the NHL objected to … well, something, because Peel was quickly suspended for his next game. And that’s where the outrage, or at least the confusion, comes in.

Was the league upset that Peel was photographed having a drink? That would be odd, since it was his night off. Was it something he said? As Sporting News points out, some of his comments may have pulled back the curtain a little too much. Was it that he met with the media at all? It could be, given that the league almost never makes officials available.

Peel comes out all of this looking like a sympathetic character. It’s not the first time he’s tried to seem like a human being and had it backfire — last summer, he joined and then immediately had to quit Twitter. But he comes across like a reasonably self-aware guy here, and fans are left wondering what he did to earn a suspension.2

And that’s a problem. The league may have a valid beef here, but we don’t know, because it won’t tell us. It’s one thing to want to keep discipline in-house. But the suspension of an official for misconduct of any kind is a big deal, and the league should tell us what happened.

But this is the NHL, so it won’t. Chalk it up as yet another blown call.

Of course, “worst goalie” depends on who’s doing the telling. And in this case, the telling is coming from Astrom’s former head coach, a quiet and reserved man by the name of Don Cherry. Years ago, Cherry made Astrom a running joke, regaling viewers with tales of how “The Swedish Sieve” was responsible for getting him fired in Colorado.

Before he was a punch line, Astrom was a trailblazer. In 1978, he was the first European-trained goalie to start a game, and he actually earned the win that snapped the Canadiens’ record 28-game undefeated streak. His NHL career lasted three seasons, spent with the Rangers and then Cherry’s Rockies. He didn’t play all that well and was back in the minors by 1981. He went back home to finish his career in Sweden in 1982.

Was he really the worst ever? Probably not. But as we learned earlier this week, even the best can have an occasional bad night.

As more and more teams are eliminated from realistic playoff contention, fans will start turning their attention to the draft lottery. This year, all 14 non-playoff teams are eligible for the first pick, so there will be plenty of excitement as the lottery draws closer.

Luckily, we don’t have to wait to get a taste of the action. Somebody made a draft lottery simulator, as you no doubt heard earlier this week when everyone seemed to discover it at once. You press a button, it draws a digital Ping-Pong ball, and you find out which team got the top pick.

I just went and tried it myself. Would you like to know which team won?

No, you would not, because you don’t care. Just like I don’t care about who won when you tried it. Really, you don’t need to tell me. And you certainly don’t need to go on Twitter, or Facebook, or your blog, or run screaming through the streets to let everyone know which team happened to pop up when you hit a button on a random number generator. We all understand how lotteries work, and that’s why none of us are interested in your screengrab.

Go play with the simulator. Enjoy it. Just don’t tell us who won, because nobody cares.

The Jets and Blackhawks face off tonight in what could realistically be called the biggest game in Winnipeg since the franchise relocated years ago. The Jets are a team in turmoil, three points back of Chicago in the Central, and desperately need a win to snap a five-game losing streak that’s threatening their chances at a playoff spot.

So this feels like a must-win for Winnipeg. The kind of game where you’ll do anything. Maybe even the kind where you’d try to get away with this …

• It’s October 16, 1993, and the Blackhawks are visiting the Jets in a Central Division showdown. It’s been a goaltenders’ duel between Eddie Belfour and Bob Essensa, and (spoiler alert) it’s about to end badly.

• We join the action tied 0-0 and with overtime already under way. We get some action featuring Stephane Quintal, the current head of the NHL’s department of player safety, who is about to get an invaluable crash course on terrible decisions that everyone hates.

• The Jets dump it in and Belfour chases the puck into the corner, as you were allowed to do back then. He tries to ring it around the boards but instead sends it directly to Nelson Emerson. Realizing that this presents a problem, Belfour does the reasonable thing and skates over to try to hip check Emerson into the net before he can put the puck down, as you were also allowed to do back then. There were no rules in 1993.

• They collide, and the puck somehow winds up in the net. That’s confusing, and it takes the announcers some time to figure out how it got there. Emerson seems confused, too, until he sees the referee signaling goal, at which point he starts celebrating wildly. He almost seems surprised. Gosh, I wonder why …

• Our second sign of a problem comes when teammates and linesmen have to restrain Belfour from chasing the referee down the ice. Although in fairness, it’s worth mentioning that this happened after literally every goal he ever allowed.

• The initial replay is just a slow-motion version of the original angle, which doesn’t shed much light. But we do see referee Denis Morel calling for a video review, so I’m sure whatever’s going on will be sorted out soon.

• Finally, at about the 2:10 mark, we get a better angle on the replay, which reveals why the Blackhawks are so cranky: Emerson catches the puck, carries it for several steps, and then blatantly throws it into the net. It’s pretty much the most ridiculous attempt at cheating you’ll ever see.

• At this point things calm down, because it’s pretty clear this is going to be overturned. Morel stays on the phone for a curiously long time, probably having a good laugh with the replay truck over the whole thing.

• Are you enjoying these shots of a young Darryl Sutter? I hope you are.

• I’m not saying everyone knows this game is going to have to resume, but the arena music guy is blaring “Start Me Up.” I think that’s a hint, Denis.

• Finally, Morel gets off the phone and begins explaining his decision to the gathered players. There were no referee mics back then, so we’ll just have to wait for him to make a signal once all of these Chicago players are done trying to murder him and … oh. Oh no.

• “Here comes Darryl Sutter across the ice!” If you were in the next room and heard that on a broadcast today, how quickly would you sprint to the TV? I’m pretty sure I’d drop a newborn baby.

• There are actually three Sutters in this pile: Darryl, Brent, and Rich. And given how long the argument goes on, I think the other three are on their way.

• OK, so here’s what actually happened: It turns out the replay booth could only rule on whether the puck entered the net, not how it went in. Once they determined it was across the line, the rest was up to Morel, who’d somehow missed Emerson’s toss.

• I would have loved to have overheard that conversation, as the replay guy desperately tried to tip Morel off without overstepping his authority:

Morel: OK, so the puck did cross the line?

Replay guy: Well, on the one hand, yes. But on the other hand …

Replay guy: Look, I’m just going to toss this out there, but maybe you could …

Morel: I’m going to let the players know, thanks.

Replay guy: Really? Because I would glove to discuss this further … [dial tone] … He’s a dead man.

• We get another replay of Emerson’s reach-around. Dez Bryant thinks he held on to the catch for too many steps.

• The rest of the clip is basically replays of what we’ve already seen, coupled with the announcers trying very hard not to have aneurysms. There’s also toilet paper on the ice now, because at this point why not.

• Fun fact: Morel’s Wikipedia page is roughly 170 words long, and more than half of it is about this call.

Here’s a news article on the whole incident, in which Emerson hilariously denies any wrongdoing. In a nice twist, Emerson now works for the Kings as director of player development. I wonder if he ever talks about this play with Kings coach Darryl Sutter.

Have a question for Sean? Want to suggest an obscure player or a classic YouTube clip? Send your grab bag–related emails to nhlgrabbag@gmail.com.

Circling the Eastern Conference Drain: The Teams We Want to Emerge From the Depths of the NBA’s Least Coast