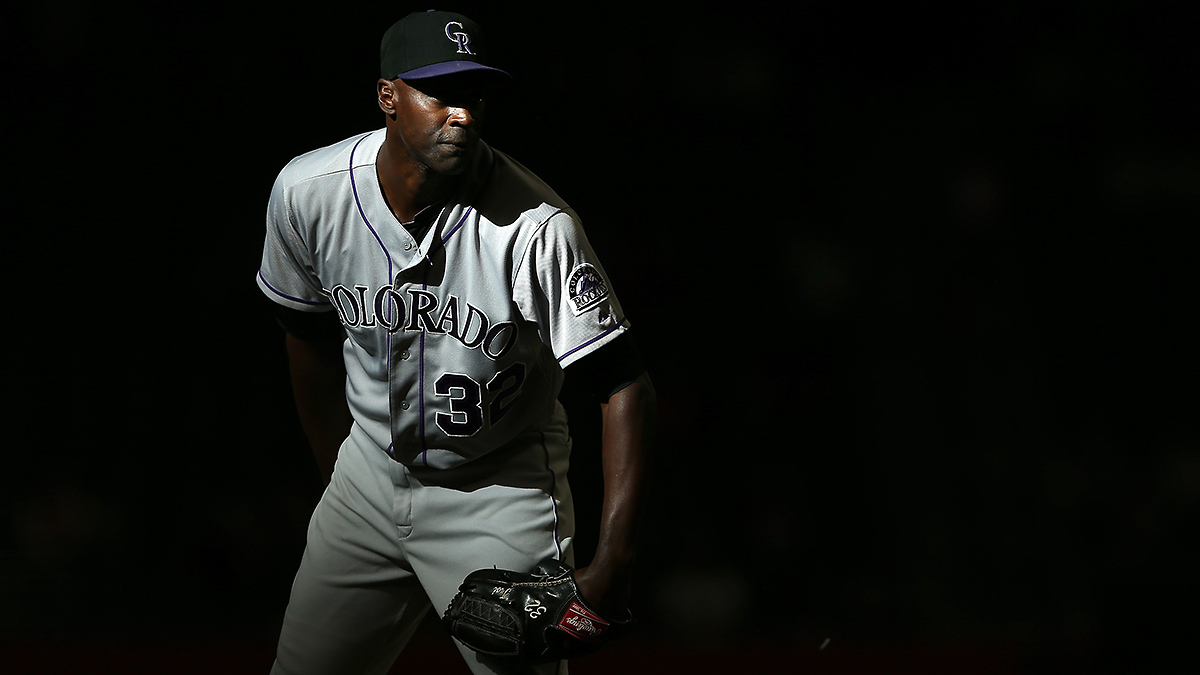 The life of a major league rookie can be simultaneously exhilarating and scary, and baseball’s rites of passage demand that veteran players step forward to calm those jitters. A benevolent team elder can impart his many years of life and baseball wisdom to a rookie, putting him at ease and making him feel that he belongs.

Rockies closer LaTroy Hawkins fits that mentor profile nicely. At 42, Hawkins is the oldest player in the majors, embarking on the 21st and possibly final season of a career that dates back so far, Hawkins played his rookie season alongside Kirby Puckett. And of all the tricks Hawkins has picked up over the years to help young teammates settle into the big league lifestyle, his favorite came from Puckett himself: acting as a haberdasher.

In April 1996, Hawkins was a rookie for the Minnesota Twins, trying to find his way in the game. He’d gotten a cup of coffee in the majors the year before, getting torched for 29 runs in 27 innings. Things went a little better at the beginning of ’96, with Hawkins shaking off a 1.1-inning, four-run disaster against the Red Sox and rebounding with a 10-strikeout gem against the Tigers two days later. A road trip to New York followed, at which point Puckett took Hawkins shopping.

“We went to PortaBella, this nice suit place,” Hawkins recalled in a recent sitdown interview. “‘Pick out a couple of suits, I got this!’ he said. It was something I never forgot. Somebody did it for me, so I wanted to pay it forward until infinity.”

Hawkins has kept his word. During his time with 10 MLB franchises, Hawkins has established a routine that’s lasted from those early years in Minnesota all the way to his current gig with Colorado, in which he strives to make the transition easier and more enjoyable for young players.

“Kirby made me feel that way,” Hawkins said. “In different ways, so did Torii [Hunter], Jacque [Jones], and [Johan] Santana. You want to feel like part of the team. Anything I can do to help make that happen, I will.”

During Hawkins’s two seasons in Milwaukee (2010 and 2011), making the newbies feel welcome — and getting them suited up — became a compulsion. He took young right-hander Tim Dillard, a 34th-round draft pick who’d struggled mightily in his first few major league outings, for the full treatment: suits, shirts, ties, the works. The next day, Dillard thanked Hawkins again for the gesture, then asked why he’d done it. Hawkins silently pointed to a picture of Puckett and nodded.

John Axford occupied that same Brewers bullpen, but he’d taken a long road to get there. He had originally been drafted in the seventh round by the Mariners in 2001, but elected to attend Notre Dame instead, then lost his scholarship following an elbow injury that washed out his junior year. The Reds took Axford in the 42nd round in 2005, making him as big of a long shot as a drafted player can be. When Axford finally got the call to The Show in September 2009 following stints at Canisius College and with the Melville Millionaires, it felt like a damn miracle.

When a legendary teammate took Axford shopping that same month, it felt nearly as surreal.

“We’re all in the team hotel, and Trevor Hoffman spreads the word to all the rookie call-ups, ‘Meet me downstairs at noon!’” Axford said. “We were in Chicago, I hadn’t even pitched in my first game yet. And then here we all are at Macy’s on the seventh floor. We get there and Hoffman just says, ‘OK, go get yourselves suited.’”

Hoffman can’t point to a specific suit-buying role model the way Hawkins can with Puckett, but Hoffman was nonetheless happy to carry on the traditions that the kindest MLB veterans have passed down through the generations. When there’s a young pitcher who’s struggling to find his way, lend him a hand. When there’s a group dinner, never let the rookies pay; doubly so for a minor leaguer subsisting on $20 a day in meal money who might see a fancy dinner as a gift from the gods. And yes, when the opportunity presents itself, help the young guys dress like big leaguers.

“When you see a kid wearing the same suit for the last three road trips, you pick a city where you can do this and you make it happen,” said Hoffman, now a baseball operations senior adviser for the Padres who oversees pitching instruction at all levels of their minor league system. “You try to keep it top secret until the last minute.”

The financial burden of a multimillion-dollar pitcher buying a round of suits is the equivalent of a schoolteacher shelling out for a few rounds of beers, but that’s not the point. The point is to create a good example as a team leader and to make sure the rookie understands what’s fueling the gesture.

“How you handle yourself off the field, it matters,” said Hoffman. “How you prepare as a reliever, a teammate, a member of that team. Understanding pecking order, what’s behind the gesture, the rites of passage, being willing to learn as you go … all of that matters.”

That’s a lesson that current Rockies teammates Hawkins and Axford both learned. Despite tempered expectations coming into the season, Colorado is 3-0 heading into today’s home opener after sweeping Milwaukee to start the year. That hot start has come with its share of drama, though. In the bottom of the ninth on Wednesday night, the Brewers tagged Hawkins for two runs on four hits, erasing the Rockies’ lead and sending the game into extra innings. Wilin Rosario followed with a go-ahead homer in the top of the 10th, and a flawless bottom of the 10th by Axford salted the game away.

Rockies pitchers will face stiff challenges this year, as they do every year, and Hawkins could find himself fighting to keep his closer’s job as the season progresses. He could even lose the gig to Axford despite an effective 2014 season in which Hawkins defied Coors Field’s pitcher-crushing effects by keeping the ball down as often as possible.

But no matter how this year’s club performs or what individual stats these two veteran relievers deliver, the game will still benefit in a small way. While pitching for Pittsburgh last September, Axford channeled his inner Hoffman, taking five Pirates call-ups shopping, including John Holdzkom, a fellow indie league graduate who at 6-foot-9, 245 pounds required what Axford called “some serious tailoring.” Hawkins continues to pay the favor forward, too, just as he promised. This spring, he took 22-year-old shortstop prospect Trevor Story and 29-year-old pitcher Yohan Flande to Élevée and told them to go to town. Both players are currently in Double-A.

To Hawkins, Axford, Hoffman, and others who’ve made these little gestures, it doesn’t matter what a player’s pedigree is or whether he’ll be occupying a nearby locker come April. It’s about making others feel welcome.

“You try to do a little something for someone,” said Hoffman, “and you hope that down the road, that guy will remember the rookies and do the same for them. That’s baseball.”