State of the Rockies: Colorado Has Nowhere to Go But Up … Right? 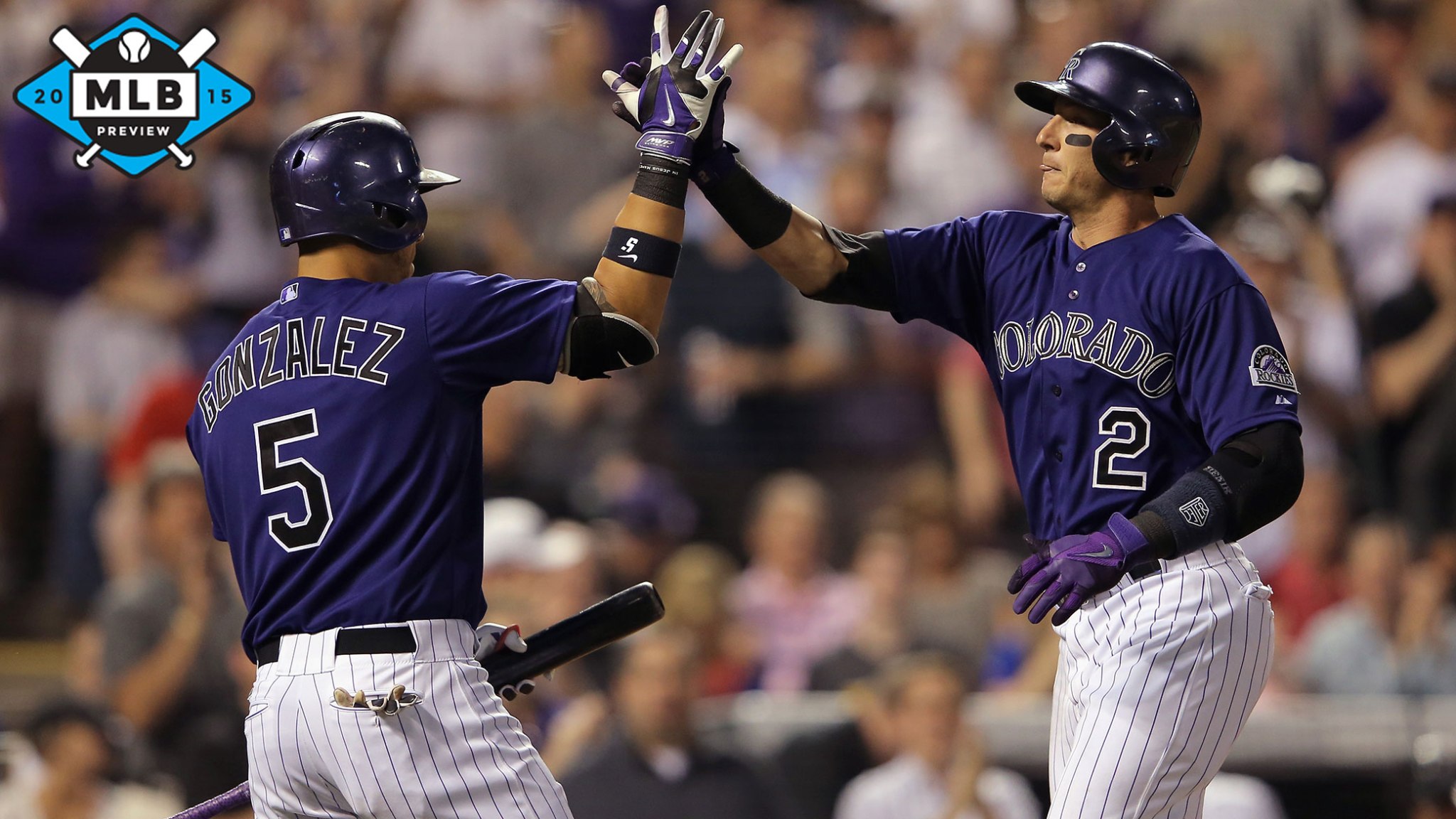 Talk to virtually any manager about his team’s injuries, and he’ll instantly tell you that every squad deals with them, that you can’t blame a bad season on trips to the disabled list, and that good groups will find a way to win despite any health-related misfortune.

Just listen to Rockies manager Walt Weiss speak about last year’s 66-96 season: “We don’t want to use that as an excuse, because injuries are something that every club deals with.”

Of course, Weiss is right — and he didn’t have to deal with anything near the jaw-dropping 2,116 days the Rangers lost to the disabled list — but the 2014 Rockies were still hit pretty hard: They lost the fifth-most total days to the DL (1,089) and had to handle a league-high 26 separate trips to the DL.

If anything, those raw numbers probably underestimate the carnage that injuries inflicted in Colorado last year. Troy Tulowitzki, the team’s best player and arguably one of the five best in baseball, missed 71 games. Carlos Gonzalez, one of the league’s best all-around outfielders, missed 92 games with a variety of ailments, including a finger injury labeled as a “fatty mass with tentacles.” Nolan Arenado, an emerging two-way star at third base, missed 51 games. And despite batting a terrific .332 and slugging .579, veteran outfielder Michael Cuddyer missed 113 games.

Even considering CarGo’s brush with an H.P. Lovecraft story, the injuries to the heart of the lineup might still not have been the most frightening part of Colorado’s 2014.

“We lost four-fifths of our starting rotation for much of the year,” Weiss said. “So even talking about Tulo and CarGo and Cuddyer and Arenado — it’s not easy to cover for those losses — but in some ways I think it’s easier to cover your position-player losses for a bit than it is when almost your entire pitching staff gets hurt.”

Identifying the problem is a good first step, but for a club that seems to suffer an outsize number of injuries more often than not, the bigger issue is finding a possible solution — if there even is one.

Is It Something in the Thin Air?

Over the 13 seasons in which Jeff Zimmerman of the Hardball Times has tracked DL data, the Rockies have finished with fewer DL days than league average only five times. As you can see in the image below (green represents Colorado, black represents the league average), the other eight Rockies seasons covered in Zimmerman’s study include some uglies. In 2012, Colorado players suffered more severe injuries than they did last year, racking up a franchise record 1,424 days lost to the DL en route to a franchise-worst 64-98 record. 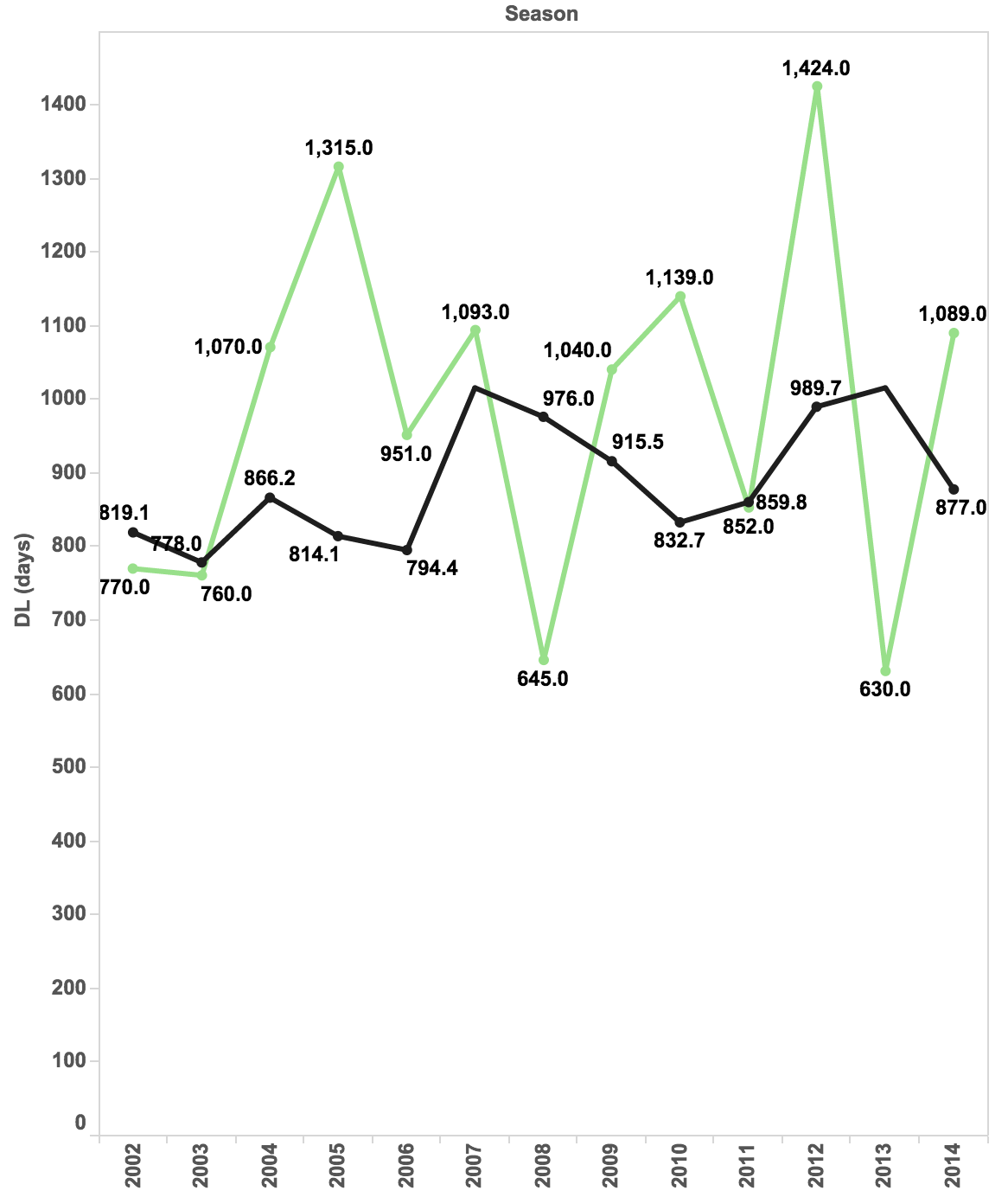 However, unlike his predecessor Bill Geivett, Colorado’s first-year GM Jeff Bridich is hesitant to chalk up the team’s health woes to playing all their home games at high altitude.

“I think we have to account for some of it, especially last year, being freakish type of baseball stuff,” Bridich said. “We do have to keep a keen eye on soft-tissue injuries and watch what we’re doing when it comes to rest, recovery, and fatigue. But last year we had a lot of broken bones and stuff like that. It’s tough to control for those.”

Very much of the Theo Epstein and Andrew Friedman school of keeping things close to the vest, the 37-year-old Harvard grad said he’s helped initiate some research projects to evaluate what the Rockies can do to stay healthier — monitoring player sleep patterns, nutrition, and rest-and-recovery trends for pitchers — but while the results from those studies start to stream in, he remains cautious about jumping to any wide-reaching conclusions about the club’s consistent injury bug.

A Crisis of Quantity or Quality? 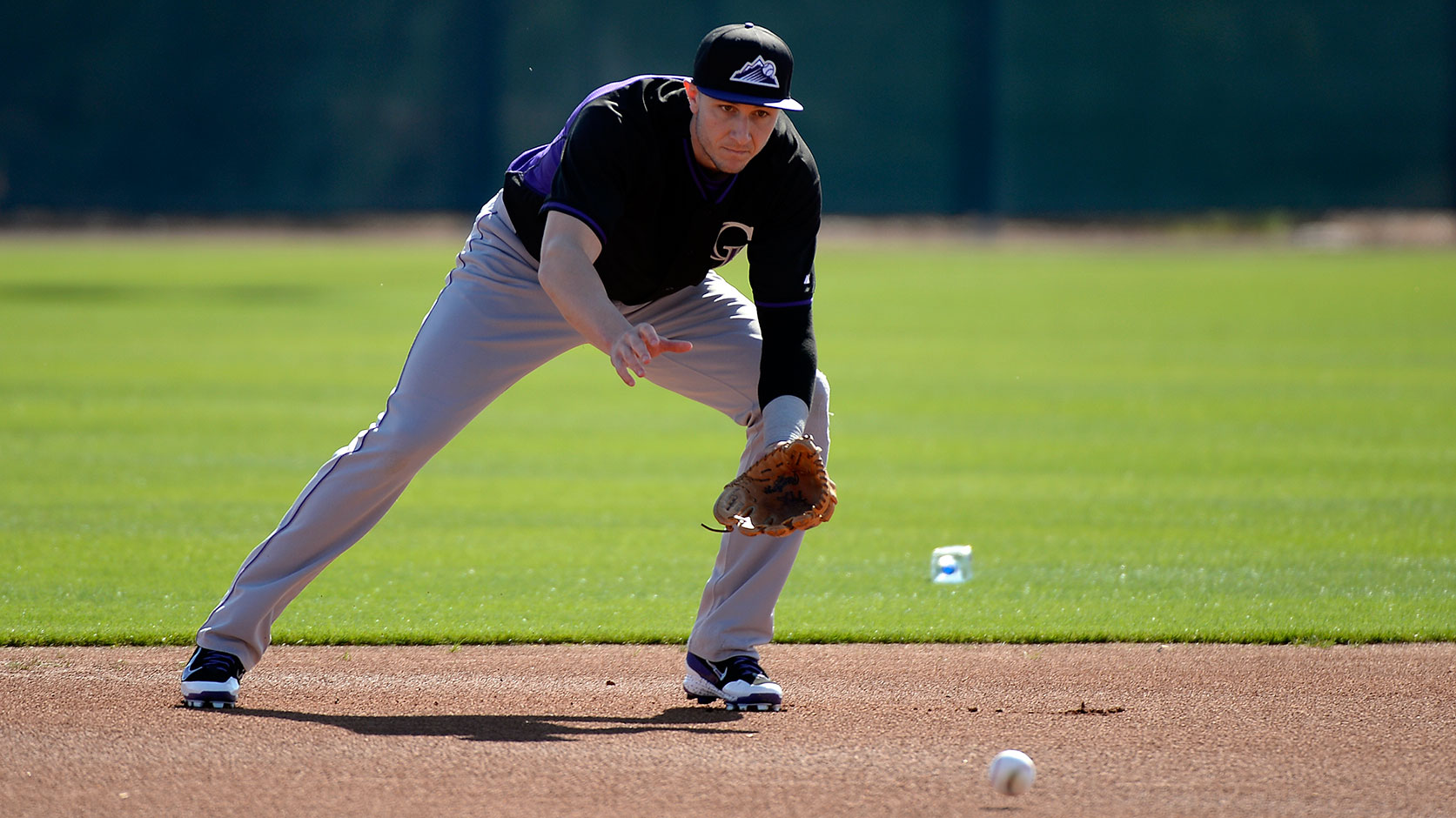 Here’s the thing: In the five seasons the Rockies enjoyed above-league-average health, they never won more than 74 games. And while last year and 2012 both seem to suggest a correlation between losing a boatload of days to the DL and losing a boatload of baseball games, it might have more to do with one particular man.

Tulowitzki played 47 games in 2012, and the Rockies capitulated. While the franchise cornerstone has played more than 150 games only twice (155 in 2007 and 151 in 2009) in his nine-year career, guess what happened in both of those seasons? The Rockies made the playoffs.

Now, it’s a bit too simple to paint Tulo’s health as solely responsible for the team’s success: No player is worth the 15-plus games that comprise the difference between the Rockies’ multiple 74-win seasons and the high-80s/low-90s win total it takes to make the postseason. Still, if Colorado has October aspirations, it’s not necessarily that it needs to fix the team-wide injury trend; rather, it needs its best players to remain healthy.

What If, Somehow, Everyone Stays Healthy?

If Tulo can avoid a sudden injury like the hip-labrum tear that cost him 64 games last year,1 and CarGo can steer clear of another Cthulhu situation, and the pitching staff can avoid a plague of setbacks, is this Rockies team good enough to pull off a shocker on the level of ’07 and ’09 and contend for a playoff spot?

Last year provided some encouraging signs: With a .380/.420/.630 line through his first 30 games, Charlie Blackmon rode a huge start to his maiden All-Star game. Corey Dickerson broke out at age 25, launching 24 homers and batting .312/.364/.567 in 131 games, a line still 40 percent better than league average after adjusting for hitter-friendly Coors Field. Veterans Justin Morneau and Drew Stubbs took full advantage of Coors and performed better than expected. Even the much-maligned pitching staff showed a few bright spots amid the injury carnage: Jorge De La Rosa earned a contract extension after making 32 starts and putting up an ERA that was 4 percent better than league average on a park-adjusted basis. Rookie Tyler Matzek made 19 starts, allowed just nine homers in 117.2 innings, and earned a spot in the rotation for this season. And with Adam Ottavino and ageless wonder LaTroy Hawkins flashing the kind of command you need to thrive at Coors, the back of the bullpen had its moments, too.

Still, they’ll need all of that to continue and then a whole lot more to go right in 2015 if they hope to contend in a division that features the defending World Series champion Giants, the always loaded Dodgers, and the much improved Padres. Getting the 2013 version of Jhoulys Chacin, whose shoulder injuries limited him to 63.1 innings in 2014, would help a lot. They’ll also hope that newly acquired relievers John Axford and David Hale fortify the bullpen, allowing Weiss to more closely manage his starters’ workloads. Then, if talented kids like Eddie Butler and Jon Gray can come up and contribute, they might really have something.

On the other hand, if Tulo and/or CarGo miss significant amounts of time again, that would likely scuttle any hope for a Cinderella season. And if that happens, we’ll likely get another round of trade speculation, which might finally lead to Colorado’s stars getting dealt — if other teams are still willing to pay full price for a now 30-year-old Tulo who’s owed $20 million a year through the end of the decade. With just three playoff berths in 22 years of existence, that kind of sell-off would be a cruel blow to such a rarely successful franchise. But hey, at least Coors Field will still be awesome. 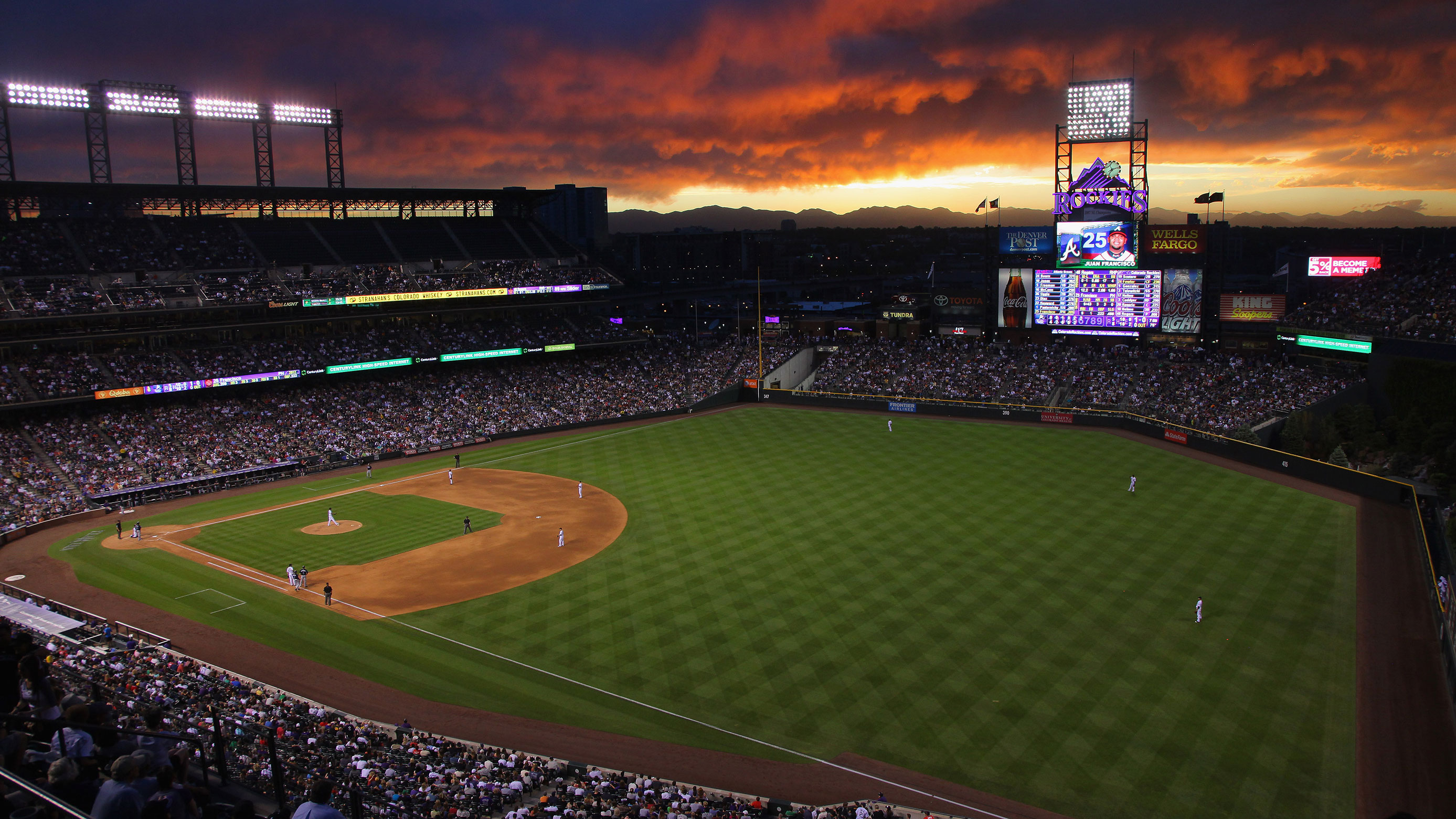