The MLB Breakout Brigade: Who’s Poised for a Star Turn in 2015? 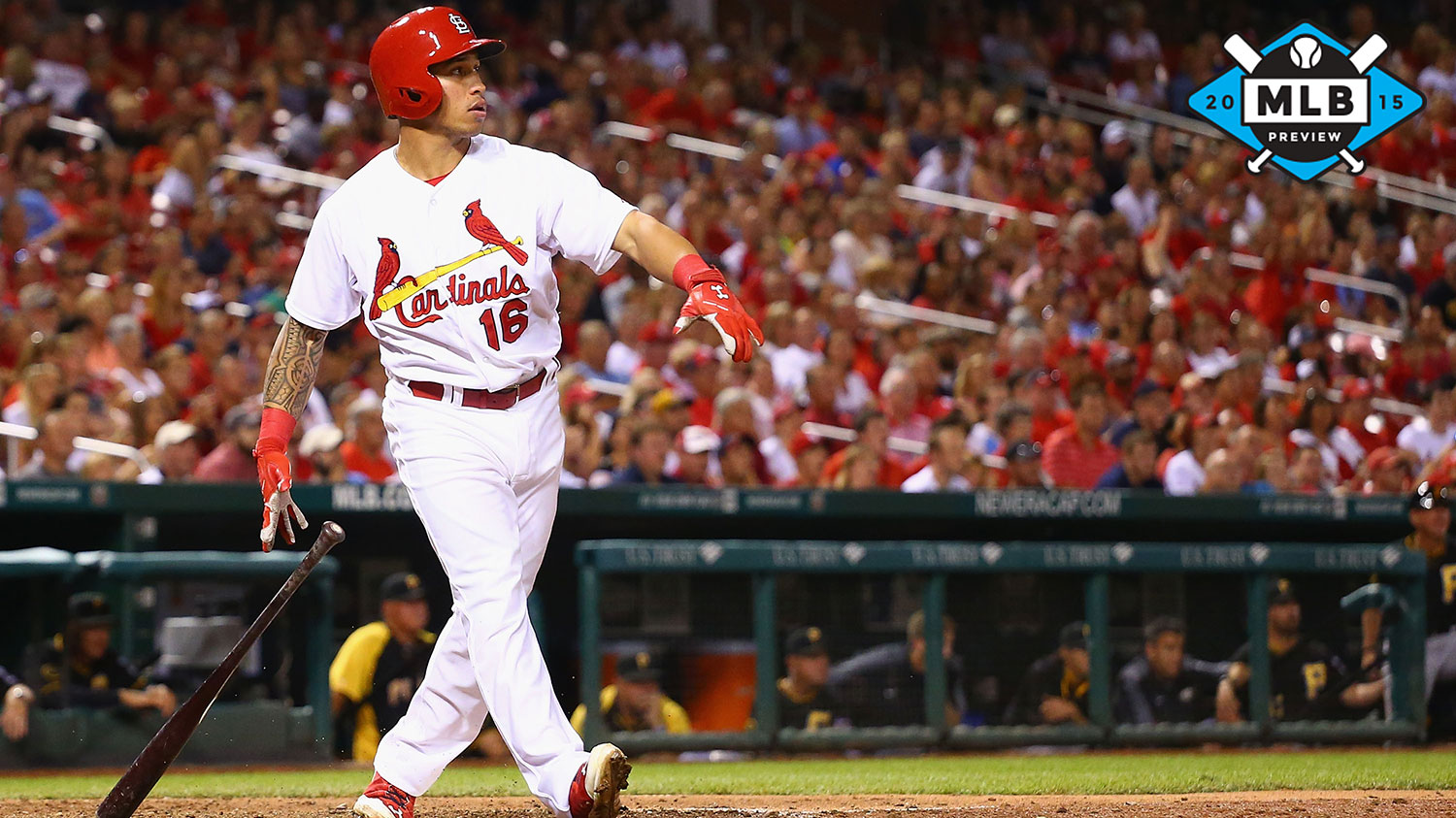 Welcome to the 2015 edition of Grantland’s annual MLB Breakouts column. Last year, I talked up Giancarlo Stanton (good!), Nolan Arenado (very good!), and Anthony Rendon (nailed it!) as players who would take a step forward, whether through an increase in playing time, improved skills, or both. I also touted Danny Salazar (meh) and Ivan Nova (NOOOOOO!!!!).

Before we get into this year’s bushel of breakout possibilities, our usual ground rules:

1. A player with remaining rookie eligibility can’t be considered a breakout candidate, even if he has already enjoyed a cup of coffee in the big leagues. That disqualifies otherwise worthy youngsters such as Rusney Castillo, Jorge Soler, Joc Pederson, Aaron Sanchez, Daniel Norris, Andrew Heaney, and others.

2. A player who has already made the leap can’t put up a breakout season, unless his projected numbers are so far above his previous career bests that he looks like a double-breakout star (like Stanton was last year). That disqualifies many already accomplished young players who could continue to perform at a comparable level, including Rendon and Corey Kluber.

3. Finally, this is about real-life value, not fantasy value. If Ken Giles takes over for Jonathan Papelbon, thrives as the Phillies closer, and saves 40 games, it won’t really be a breakout season in any realm other than your 12-team mixed league since Giles was already excellent last year in a setup role that brought similar leverage situations.1 The same goes for, say, a player who moves to the cleanup spot and drives in 120 runs while putting up other numbers similar to his prior results. A bump in team-dependent counting stats isn’t the same thing as a meaningful jump in real-life value.

With those explainers out of the way, let’s take a closer look at the players who are poised to take off this year and potentially give their teams a big boost along the way. 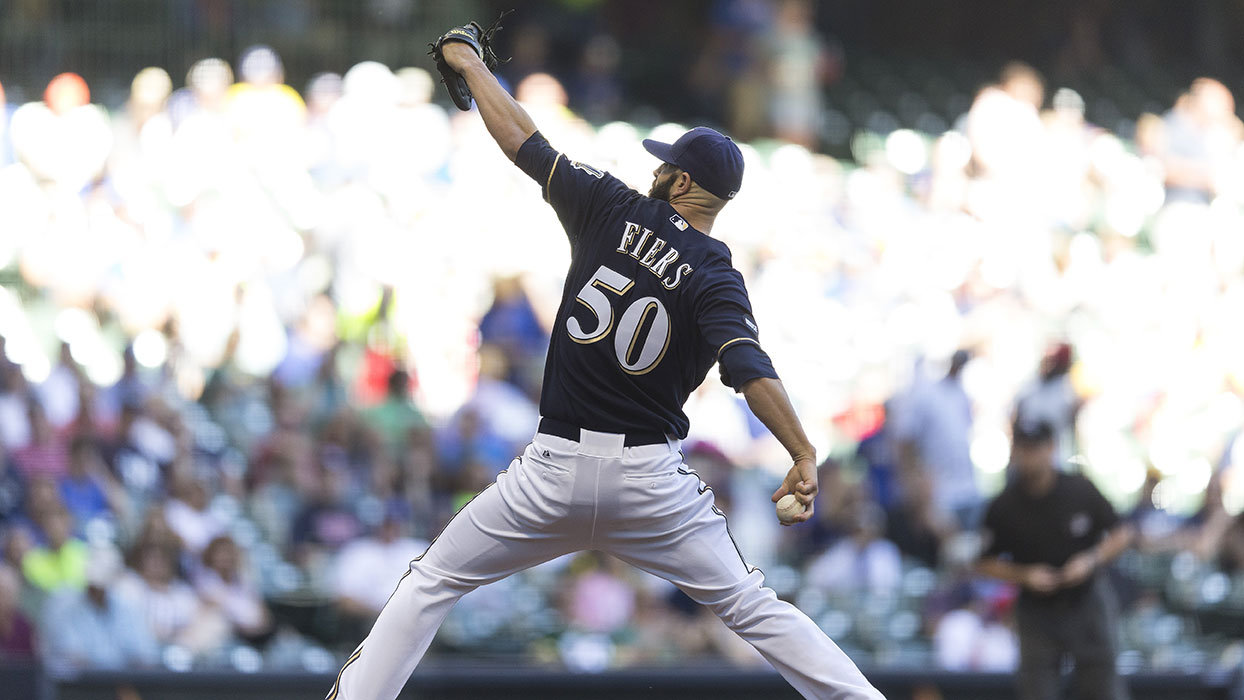 Last season, Fiers struck out 76 batters in 71.2 innings.2 That raised his career total to 228 punchouts in 223.2 frames — a surprisingly high number given that his fastball averages a tick less than 90 mph.

Since 2000, according to PITCHf/x velocity data, there have been 241 starting pitchers with a sub-90 fastball who threw 200 or more innings. Of those 241, only one pitcher has fanned a batter or more per inning … and it’s Fiers.

After a rough 2013 in which he allowed eight homers and a 7.25 ERA in 22.1 innings, Fiers greatly improved the effectiveness of his fastball by shifting his positioning toward the right side of the rubber. Suddenly, he had a pitch that could pound the outside corner against left-handed batters and come in on righties in a way that’d make it look faster than 89 mph. Fiers fired his four-seam fastball 58 percent of the time last year, and batters hit a microscopically low .127 against it. This was Fernando Rodney all over again: a pitcher who, by adjusting his spot on the mound, dramatically refined his command and became a pain in the ass to hit.3

Since so few starting pitchers (read: none) throw as slowly as Fiers does and still strike out so many batters, there are no precedents to look at to predict how he might fare going forward. Still, any pitcher with a 4.5-to-1 strikeout-to-walk rate offers intriguing upside, and the 29-year-old should slot into the Brewers rotation right at the start of the season for the first time in his career. For a Milwaukee team that shipped off its ace, Yovani Gallardo, to the Rangers in January, a Fiers breakout would be especially welcome.

It’s tempting to simply glance at Kolten Wong’s 2014 playoff highlight reel and dream about a talented young player who, empowered by brief success under the bright spotlight of the playoffs, suddenly transforms into a fully realized star. While I do think it’s possible for baseball players to improve by gaining experience, we also don’t want to overreact to tiny sample sizes. If a big postseason run alone could fuel a monster breakout, Mark Lemke would’ve set the National League on fire for a decade after what he did in the 1991 World Series.

The biggest mark against Wong is, well, his inability to avoid making outs. Even counting his impressive playoff results, Wong’s career on-base percentage sits at a measly .278 — along with a .235 batting average — in 531 plate appearances. However, his minor league track record suggests that he should improve in those areas: Wong whiffed about one and a half times for every walk in the minors, compared to three and a half strikeouts for every walk so far in the big leagues.

Another reason to hope for improvement comes from Wong’s bad luck with batted balls last season. He hit just .275 on balls in play last year, well below the MLB average of .299. Now, some of that comes down to a line-drive rate (18.9 percent) and Hard-Hit Average (.159)4 that were a bit below average, but Wong’s minor league batting average of .305 in 1,344 plate appearances provides reason to believe that more of those balls will start dropping.

The good thing for Wong is that even if he slumps a bit to start, he’ll stick in the Cardinals lineup because (1) he’s talented, (2) he’s a good defender, and (3) St. Louis doesn’t have any great alternatives. Entering his mid-twenties, and with some promising numbers in his track record, there’s potential for a nice leap forward. 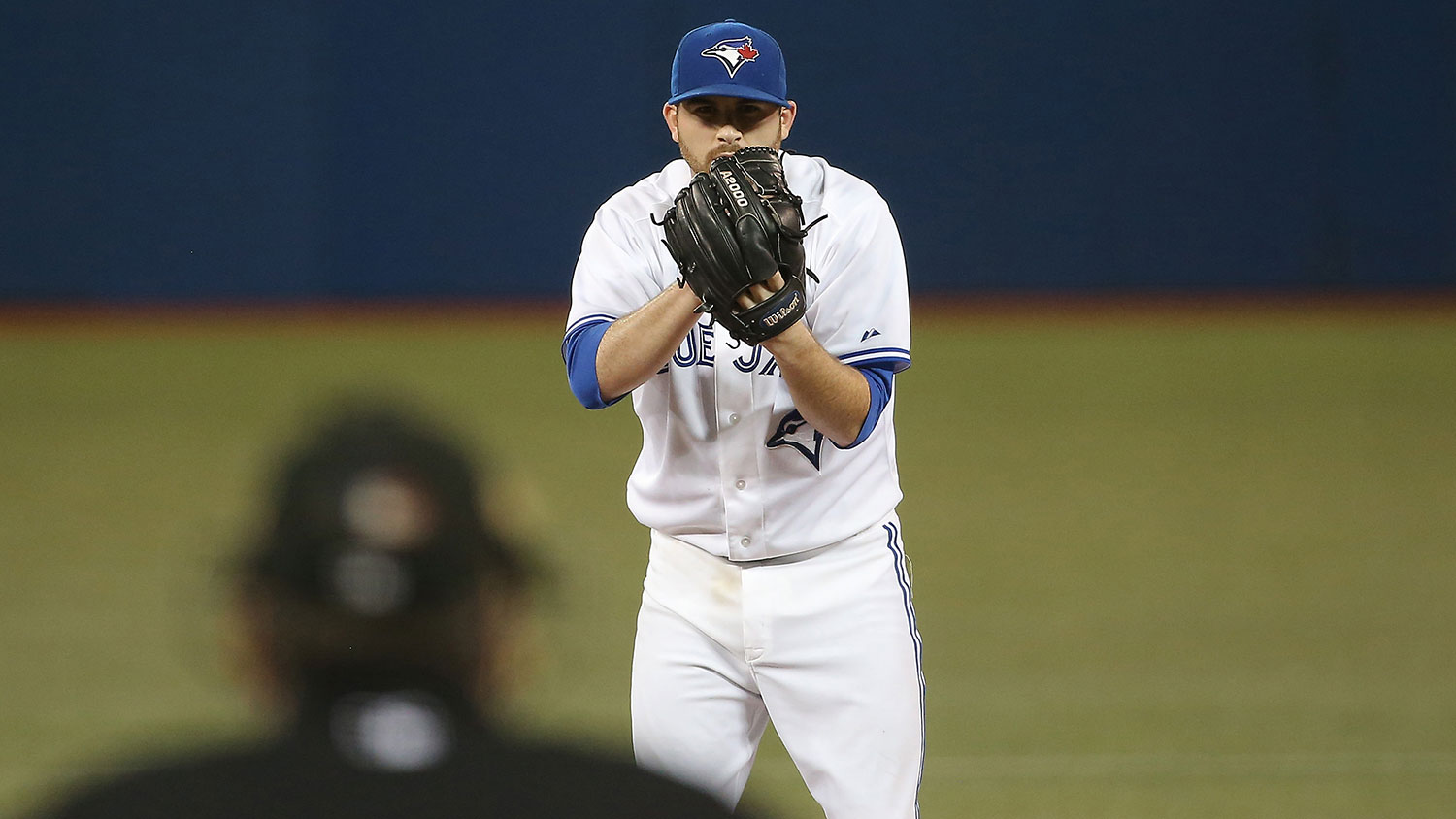 Using a player’s impressive second-half numbers to predict next season’s performance can be a tricky proposition. Sometimes they’re a sign that a player has finally put everything together; other times, they’re red herrings. Just ask the Baltimore Orioles: Ubaldo Jimenez finished the 2013 season by mowing down opponents, got a big contract from Baltimore, and promptly imploded. The O’s are a smart organization, and they no doubt scrutinized many angles, but in hindsight we can look at the second half of that 2013 campaign and say, “Gee, maybe clobbering the Astros, White Sox, and Twins a bunch of times doesn’t really prove that much.”

Hutchison did face a few patsies during his big second half last season — notably the Tampa Bay Rays and their American League–worst offense — but he didn’t feast on the minnows like Jimenez did. Against that moderate competition, Hutchison caught fire: In his final 16 starts, he struck out a staggering 105 batters in 92.1 innings, with 63 percent of his pitches going for strikes. While his ERA — 4.97 during that run, 4.48 for the year — obscured an impressive performance, we can blame it on lousy results with men on base. Opposing batters hit .282/.335/.484 against Hutchison with men on, compared to just .222/.288/.373 with the bases empty. Now, it’s possible that Hutchison was just a young pitcher struggling with the pressure of performing in tight situations, or that he has some specific flaw that makes him vulnerable when pitching from the stretch. More likely, though, the discrepancies between the “runners on base” and “bases empty” numbers will eventually even out in Hutchison’s favor.

None of this is to suggest that the 24-year-old Hutchison is ready to be a super-elite pitcher. For one thing, he needs to solve his problems against lefties, as he allowed a .353 Weighted On-Base Average against left-handed batters in 2014, next to just .273 against righties. But monster strikeout totals play in any park, even one as homer-friendly as Rogers Centre has become. Throw in what should be an improved defense thanks to the additions of Josh Donaldson and especially Russell Martin, and you have some enticing ingredients for a breakout.

This is a simple case of an already good player preparing to take the next step. In 933 career major league plate appearances, the 23-year-old has hit an impressive .285/.365/.400 and posted a 116 wRC+, 16 percent better than a league-average hitter. Players who perform that well that young tend to turn into stars. With quality defense, excellent base-running skills, and an improving batting eye, Yelich is a power spike away from becoming a fringe MVP candidate. 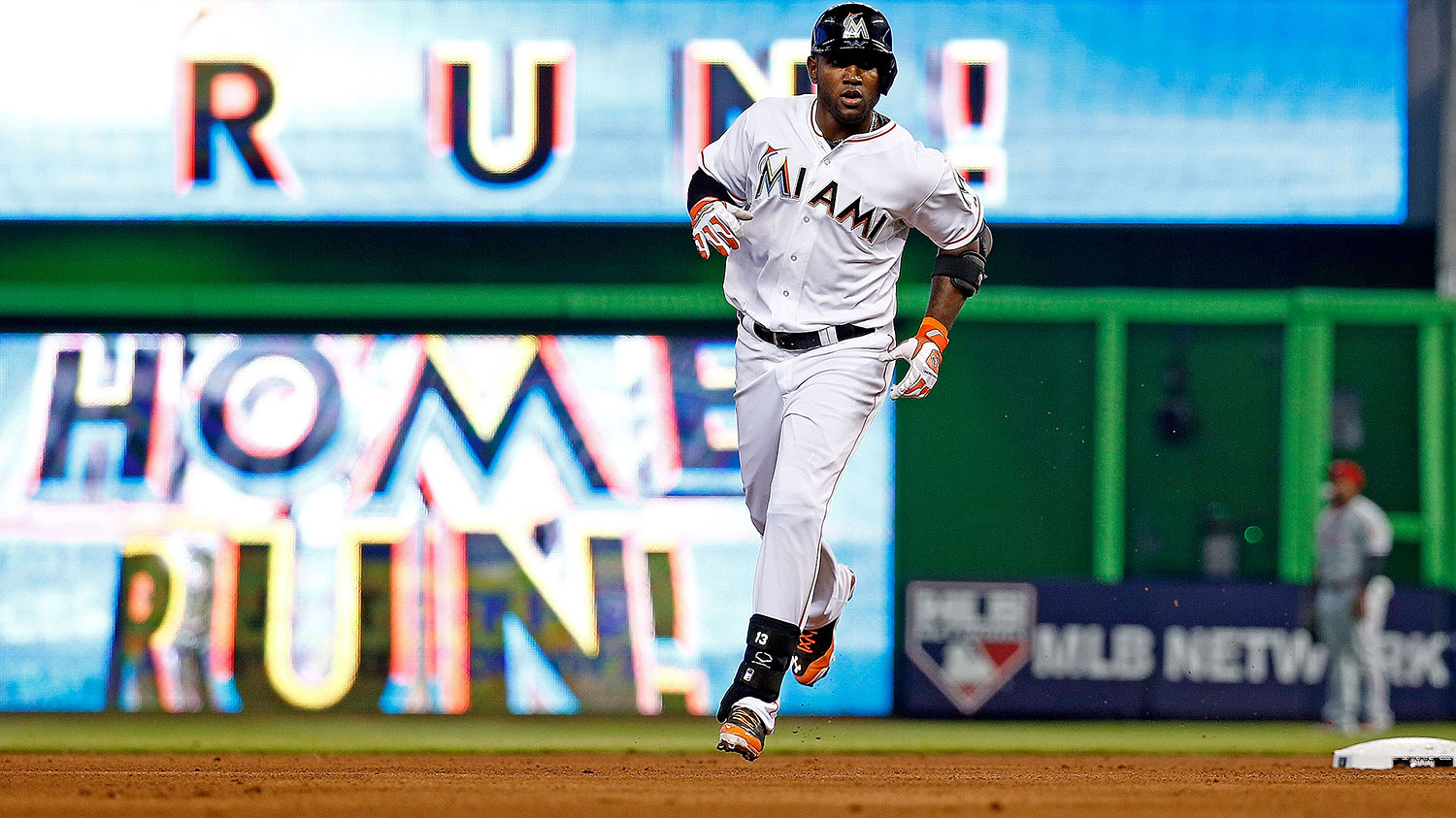 Between Yelich, Ozuna, and Stanton, the Fish have a good case for the best outfield in baseball. Along with Mike Trout, Oswaldo Arcia, and Mike Zunino, Ozuna was one of just three 23-and-under players to sock 20 or more homers last year. ESPN Insider’s Tony Blengino has much more insight on why the 24-year-old could go from being a good, young outfielder to one of the best players in the league, but, in a nutshell, Ozuna’s power, precocious results, and encouraging batted-ball profile (lots of hard contact) bode well for his prospects. With the potential breakouts of both Yelich and Ozuna, the Marlins look pretty alluring as a World Series deep sleeper pick.

Consider this a straight hunch play on a post-hype prospect. Great players don’t always burst onto the scene and become instant stars, and as Bogaerts sits on a .241/.299/.363 line through his first 644 major league plate appearances, he’s just the latest example. The no. 2 prospect in all of baseball according to MLB.com, Baseball Prospectus, and Baseball America last year, Bogaerts certainly has star talent, though. He’s still only 22 years old, so we should probably be a bit more patient, but screw it. With 162 games played in the bigs and the shortstop position finally all to himself, this could be the year Bogaerts starts living up to all that potential. 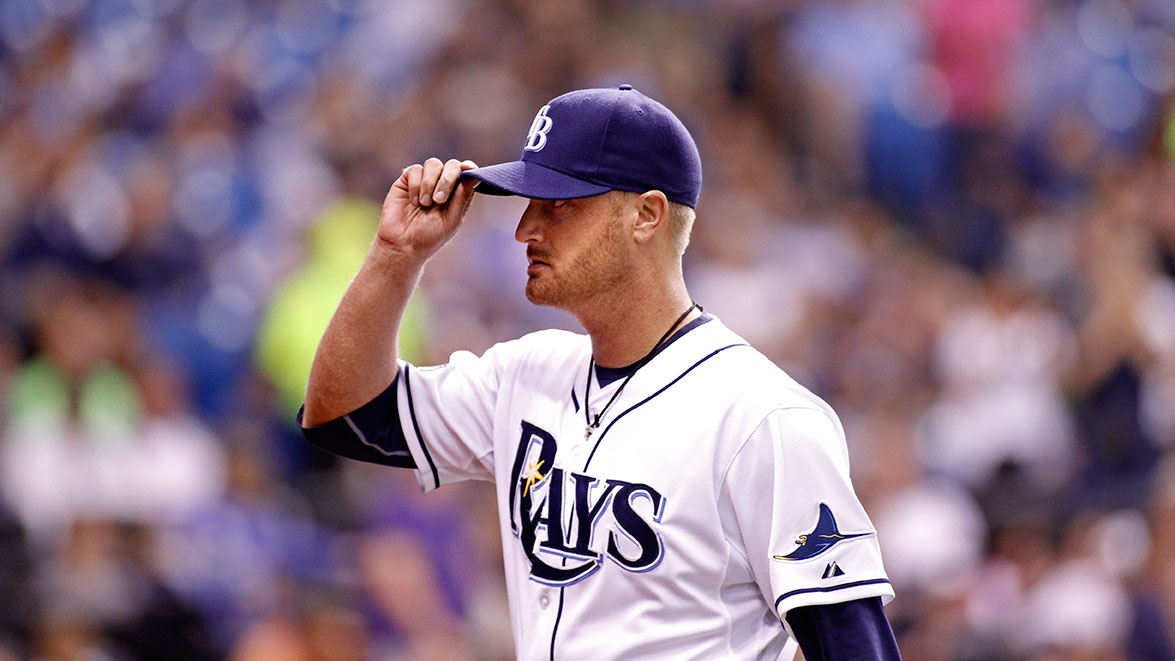 Here’s to the third time being a charm! I’ve been on the Cobb bandwagon more or less since he was in diapers. In 2013, I touted him, figuring a higher innings count would yield big results — only for a frightening line drive off the head to prematurely end his season. Then I called out his name again for 2014, banking on his first full healthy season in the majors. He didn’t quite make it there, logging only 166.1 innings thanks to a handful of freak injuries, but he posted the best combination of strikeout, walk, and home run rates in his young career. With a still-solid defense behind him, a friendly pitcher’s park helping his cause, a terrific defensive catcher at his disposal in Rene Rivera,5 and the possibility of — whisper it — finally putting up 210-plus innings, Cobb could be this year’s Corey Kluber.

The same factors that led me to tout Salazar and Kluber last year are in play again this season. Catcher Yan Gomes is a great pitch-framer, but, more importantly, these are pitchers with good stuff and at least stretches of putting up strong peripheral stats. Plus, they’re all at an age and experience level where a breakout often occurs.

The soon-to-be-28-year-old Carrasco hails from the Hutchison camp, coming to 2014 off of a strong final 10 starts: 69 innings pitched, 78 strikeouts, 11 walks, 45 hits and two homers allowed, and a 1.30 ERA. The third-overall pick in the 2011 draft, Bauer owns an eclectic and at times electric eight-pitch repertoire that helped the 24-year-old fan 143 batters in 153 innings last year. He is also one of the most fascinating characters in the game. As for Salazar, we’re going back to the well after an erratic season that included an extended demotion to the minors, but 120 punch-outs in 110 innings hint at the potential that the 25-year-old’s fastball-slider-splitter combination possesses.

I’m extremely bullish on the Tribe this year, and the sky-high upside of their young pitchers is one of the biggest reasons.

The NFL Trade Wheel: Making Sense of Who Went Where

Hanging It Up: Retirement Is the Latest NFL Trend