Where’s the Beef: Can the Red Sox Survive Their Crap Starting Pitching? 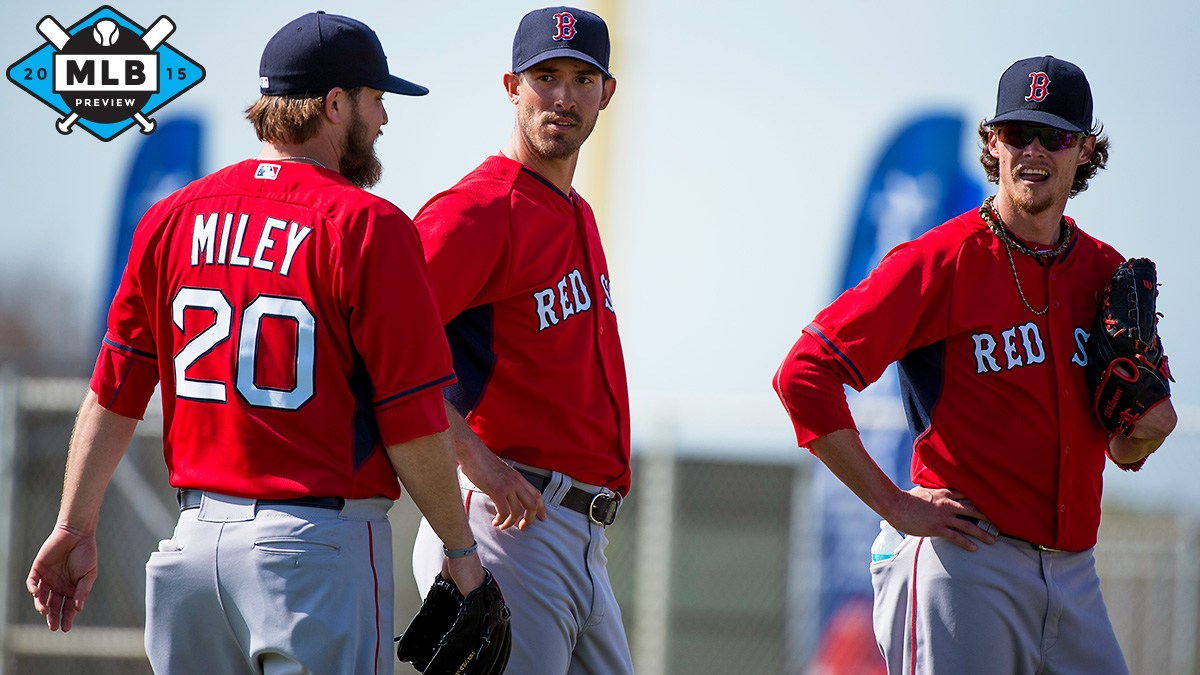 There’s a lot to like about the 2015 Boston Red Sox: They’ve got proven veterans, exciting youngsters, and at least nine position players who can hit. They can get on base and bat for power. They’ve got some speed — only as much as a team can have with David Ortiz in the lineup, of course, but that’s OK — and as much depth as any American League squad.

I think Boston’s front office did great work this offseason, adding useful and often young talent while spending nothing but money, which is harder to do now than it has been at any other point in history. It’s got to be tempting, looking at that lineup, to predict big things for the Sox.

But that pitching staff … holy shit. I’m far from the first person to notice that the starting rotation will be a weak point for Boston, but if anything, I think we’ve underplayed the implications of Rick Porcello being the Sox’s best pitcher.1 Boston is attempting to win a championship behind a starting rotation comprised of three youngish guys who aren’t nearly as good as people seem to think they are (Porcello, Wade Miley, and Joe Kelly) and two older guys (Clay Buchholz and Justin Masterson) who were a lot better five years ago than they are now. Typically, that approach doesn’t end well. Certainly not in the American League, and definitely not when the team in question plays its home games at Fenway Park.

On a team with title aspirations, this pitching staff looks more than anything like it’s missing a piece. It’s the baseball equivalent of deciding to cook chili, going to the grocery store to get all of the ingredients, and then realizing after you get home and put everything on the counter that you forgot to snag the ground beef. GM Ben Cherington and his merry men went out shopping, picking up a Miley here and a Porcello there and grabbing some Alexi Ogando from the sale rack just in case, and then got home, started heating the skillet to brown their ace, and … oh no … they forgot to buy a no. 1 starter. Without that, it’s not really chili, right?

Of course, you can spin any one of Boston’s five starters however you like. Believers will note that Porcello is only 26 and is coming off a career year. Miley once won 16 games, made the All-Star team, and finished second in rookie of the year voting. Kelly throws hard and has made postseason starts for a Cardinals team that won the pennant. Buchholz once led the American League in adjusted ERA. And Masterson has been a workhorse; plus, he’s just two years removed from going to the All-Star Game.

Still, for three of those five projected starters, the argument for being anything other than back-of-the-rotation cannon fodder relies on ignoring recent ugliness.

Kelly wasn’t that bad last year, but he was below average in only 96.1 innings, posting a strikeout rate (6.17 K/9) that was too low and a walk rate (3.92 BB/9) that was too high to sustain success as a starter. That’s a rotten foundation.

Admittedly, it wasn’t as rotten as Masterson’s ERA (5.88), or the nagging inconvenience of Buchholz not having been healthy and good at the same time since 2010, when he outpitched his peripherals by more than a run thanks to a historic stretch of luck with BABIP, home run rate, and strand rate. Miley has actually been more or less league-average since his 2012 rookie campaign, and he’s good for 200 innings a year. That’s great for a no. 4 starter; it’s less great for a no. 3.

And then there’s Porcello, whose 2014 “breakout” season wasn’t exactly Kluberesque, but is the one positive data point in a career in which he’s basically been Kyle Kendrick or Jeremy Guthrie with better teammates. Porcello’s pitch-to-contact approach has made him a victim, a man who lives and dies by his BABIP and strand rate in a world in which strikeouts are not only cheap, but also the best weapon against the modern hitter.

This rotation isn’t just bad for a contender, it’s bad full stop. It’s almost depressing, because you look at the lineup and hope, and then you look at the rotation and watch your hope fall to pieces under a cannonade of, speaking optimistically, mediocrity.

What bugs me about this rotation isn’t so much that it’s going to be bad — though, don’t get me wrong, that bothers me a great deal. It’s that there’s no upside, no 2013 Francisco Liriano or similar reclamation project. It’s just five guys who are in their late twenties or early thirties and sort of are who they are at this point. There’s not even a potential no. 1 starter sitting at AA, waiting for the call, like the Pirates had with Gerrit Cole in 2013 or the Orioles had with Kevin Gausman last year.2

The unspoken hope, when putting a rotation such as Boston’s out onto the field, is that the offense will be so good that the pitching won’t matter. And it’s possible that’ll prove true for the Sox this season. On the one hand, “2015 Opening Day starter Clay Buchholz” conjures up images of line drives and doubles off the Monster raining down on poor Hanley Ramirez, one after the other, like debris crashing against a double-paned window during a hurricane resistance test. But on the other hand, what a lineup.

Boston’s offense had better be great, because the AL East is going to be a dogfight this year, and the Red Sox are going to have to beat four teams that aren’t trying to win behind such a shit-ass pitching staff.