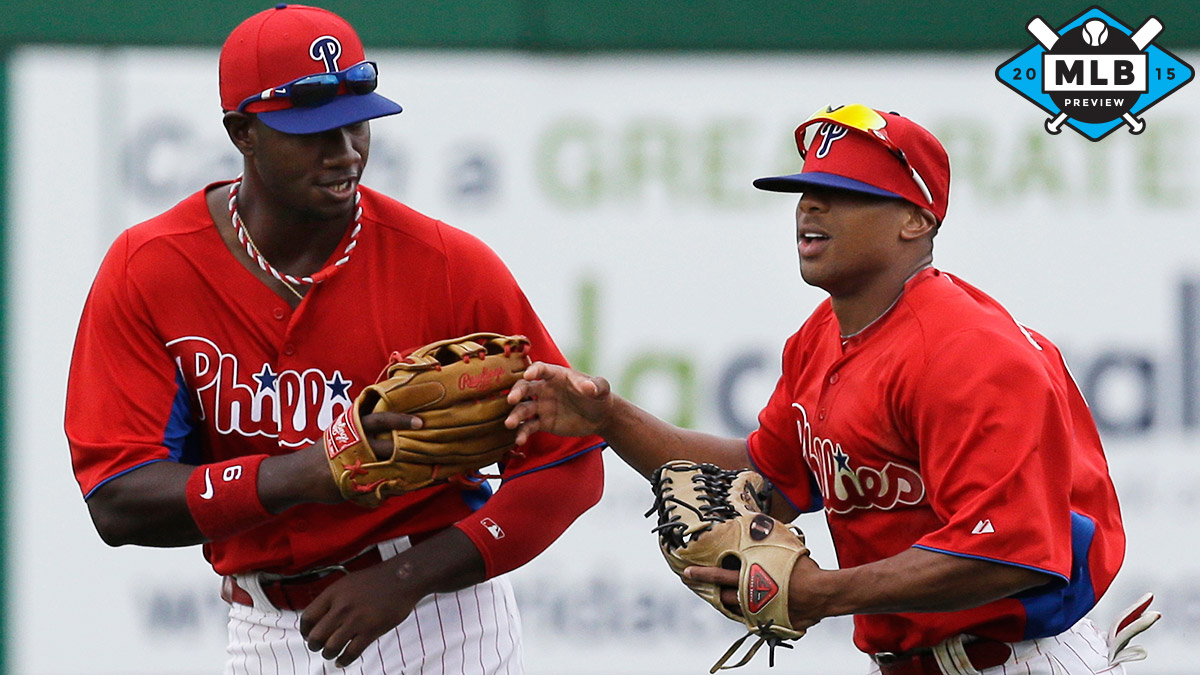 One of the frustrating things about baseball is that despite being extremely simple — or perhaps because of that — it requires an extraordinary level of skill and precision to play professionally. Not only being able to hit a moving target with a stick, but having the strength to hit that target a long way, plus the coordination to hit a breaking ball — that sort of thing.

Because baseball requires such refined skills, the game’s highest levels are littered with men who can do one or two things as well as anyone in the world, but whose lack of certain other abilities keeps them from performing as stars or being lauded as such.

All 30 teams have at least one pair of players whose talents complement each other, and often platoons are built into the lineup to accommodate that. But what if we could take those two players and combine them into one?

Now, if that suggestion conjures up images of The Human Centipede or the atomic pig-boy from Archer or “I don’t know, sweetie, maybe we should have been worried when his first words were ‘Hail Satan,’” you should rest secure in the knowledge that such gene-splicing, limbs-sewn-together, affront-to-God-type stuff is precisely what I’m proposing here.

Now let’s get out the bone saw and surgical stapler and see what we can cobble together.

Two left-handed hitting outfielders, both former top prospects, born eight months apart, maligned for shortcomings both offensive and defensive. Revere and Brown are now squarely in their mid-to-late 20s, the stage of life where youthful promise and idealism are crushed under the decaying seracs of real-world pressures, then melted and eroded into dust and vapor.

Brown and Revere could be building blocks on the next good Phillies team, or they could be scrap heap free agents in a couple of years.

Revere is the kind of player who makes you wish “unique” hadn’t lost its meaning. He’s got as much speed and contact skill as anyone in the game, but he’s hamstrung by two things: (1) one of the weakest throwing arms in the majors, and (2) almost no power, which not only depresses his slugging percentage but fails to deter opposing pitchers from throwing only strikes.

Brown, conversely, is a horrendous defender despite boasting a huge throwing arm, and his swing is as beautiful as it is riddled with holes. He has the kind of power that comes with being 6-foot-5 and swinging as hard as he does. Put Revere on Brown’s back, and you’d have an outfielder with elite speed, elite contact ability, and power to spare. I don’t want to say that Dombrown Benrevere would be as good as a prime Josh Hamilton, but he’d be the same kind of player, maybe with a little less power but more speed.

If you were worried about Joe Mauer being too big to play catcher, you’re going to love the Conger-Gattis hybrid, who’d probably have to use the Colossus of Rhodes as a model for his gear.

The Astros gave up a huge haul for Gattis because of his tremendous strength, which manifests itself in dingers. Lots of dingers. Gattis actually handles the bat better than people give him credit for: His 24.2 percent strikeout rate in 2014 was 53rd-highest among players with 300 or more plate appearances, which, make no mistake, is high, but acceptable for a power hitter. Justin Upton, The Mighty Giancarlo Stanton, and Mike Trout all struck out more often.

The catch with Gattis is that his nickname, El Oso Blanco, The White Bear, is meant to communicate his size and strength. It’s also a fairly accurate description of Gattis on defense — if a bear stumbled upon a glove in the woods, he’d probably operate it more or less like Gattis does. Bill James once wrote that Bobby Bonilla spent 8,000 career innings at third base, so he’s a third baseman, and if you sent him into space a couple of times he’d be an astronaut too. The same applies to Gattis at catcher.

Conger, on the other hand, is an elite pitch framer but a dreadful hitter, and when Gattis catches this season instead of playing outfield or DHing, it won’t be surprising to see Conger used as his defensive caddy. Of course, that wouldn’t be necessary at all if we could mash them together. Last year, only Buster Posey hit better than Gattis and framed better than Conger. Jonathan Lucroy, Russell Martin, and Yan Gomes came close, and Yadier Molina probably would have, too, if he’d been healthy — but that’s the level of player Congattis would be, even if you’d need construction equipment to move him around the bases. 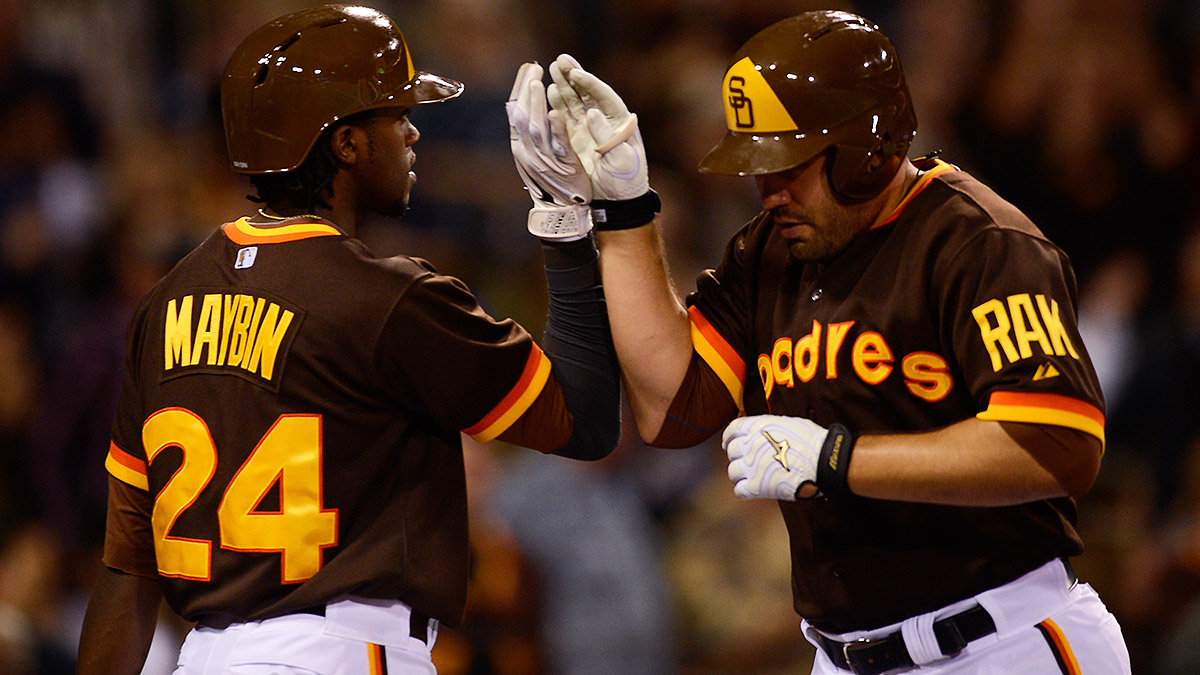 All the kvetching about the Padres not having a for-real defensive center fielder is garbage. They do in Cameron Maybin, but the problem is that despite being 6-foot-3, 205 pounds, Maybin doesn’t hit for much power, and despite not hitting for power, he strikes out a lot and doesn’t get on base that well.

So if Carlos Quentin — who might be past his prime at age 32, but who can still get on base thanks to his penchant for being hit by pitched balls — could lend the necessary on-base skills and power to Maybin, the Padres wouldn’t be asking if Wil Myers could play center well enough to get his bat in the lineup; they’d be wondering if the Maybin-Quentin hybrid could still hit well enough to get his (their?) glove in the lineup.

I love Nathan Eovaldi for reasons that aren’t entirely clear to me, because despite having the size (6-foot-2, 215 pounds), durability (199.2 IP in 2014), and fastball velocity (95.8 mph on average in 2014, fourth among starters who qualified for the ERA title) of a no. 1 starter, he’s not very good. And it’s not for the reason you’d think: Given those gifts, you’d expect his downfall to be a lack of command, but in fact, his strikeout and walk numbers are very similar to guys like Mark Buehrle and Jason Vargas, soft-tossing lefties who eat innings but can get shelled if everything doesn’t go right.

And so it is with Eovaldi, who’s trying to get more swings-and-misses by adding a cutter to his repertoire. But what if we could tie him to a pitcher who can miss bats, and whose downfall has been a lack of those qualities Eovaldi has in abundance?

Enter 30-year-old Andrew Bailey, a two-time All-Star closer who has thrown 85.2 innings in the past four seasons and, after injuries to his thumb and shoulder — the latter of which is as often as not the death rattle for a major league pitcher — he’s hanging on for dear life as a non-roster invitee in Yankees camp. In his prime, Bailey threw nearly as hard as Eovaldi, albeit out of the bullpen and with inferior control, but he also had swing-and-miss secondary stuff. Combining Eovaldi’s durability and command with Bailey’s stuff just seems too obvious.

Make no mistake, there is absolutely nothing wrong with Harper’s game. He is as close to a perfect baseball player as we can reasonably expect to find in a post–Mike Trout world. But his manager, for whatever reason, seems to despise him. It’s getting to the point where I’m starting to worry that Harper will change his game to make his manager happy — that he’ll stop being so aggressive in the field and on the bases, or he’ll try to hit behind the runner instead of doing this. If so, Matt Williams’s managerial style could go from “annoying” to “detrimental to the health of the game.”

I have a theory that Williams might not notice that Harper is conspicuously entertaining if Harper didn’t look the way he did, with the beard, the big hair, the excessive eye black, or the tasteless customized Mercedes. I kind of love the tackier aspects of Harper’s personality — sports are entertainment, after all — but I’d part with them if doing so got Williams off Harper’s neck and one of the most naturally talented and exciting athletes in the world could just do what he does without fear of molestation from his Lumberghian field boss.

Therefore, I propose melding Harper’s game with McLouth’s inconspicuous, grinderish, swagger-deficient body, allowing us to have our fun without Mr. Vernon from The Breakfast Club spoiling it.

State of the Rockies: Colorado Has Nowhere to Go But Up ... Right?