Medium Cool: How Wisconsin Tamed Kentucky and Why Duke Should Be (Seriously) Worried 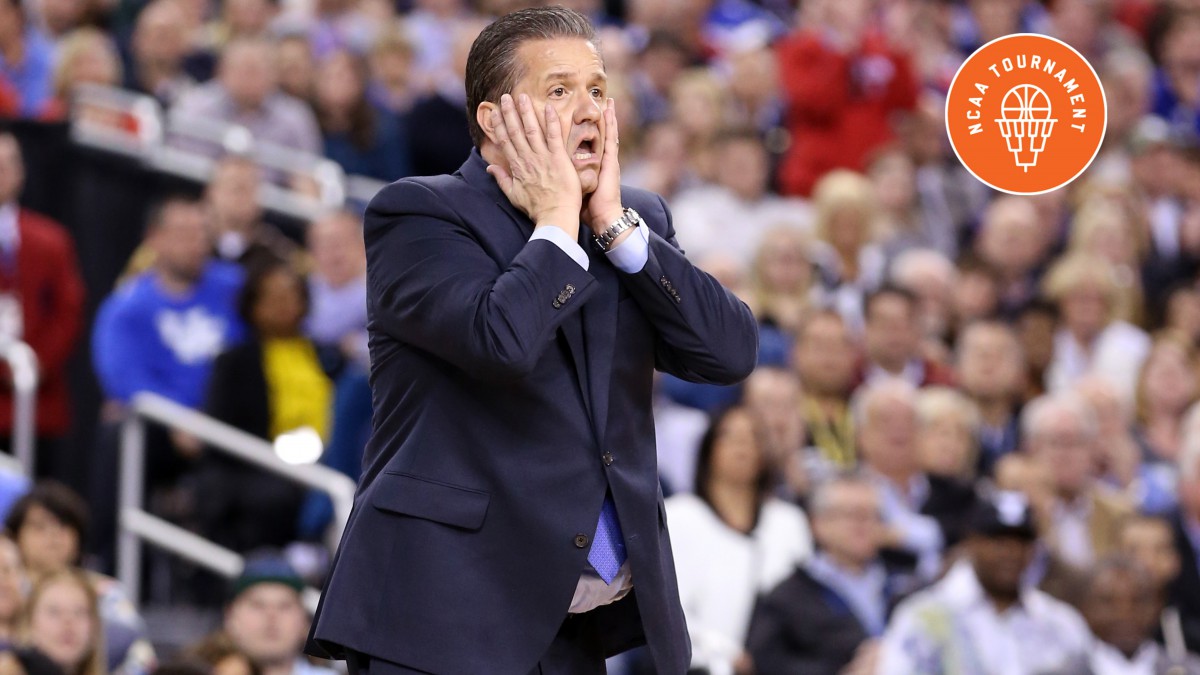 It was about 40 minutes after Wisconsin had dispatched John Calipari’s undefeated battalion of mercenaries, who had maximized their future earning power as much as they were going to in the 2015 NCAA tournament, and the Badgers were going nuts in the locker room. Down the stretch, Kentucky had played like the freshmen many of them were, and Calipari had coached like the rookie he once was. I don’t believe I’ve seen three shot-clock violations — with a 35-second shot clock, no less! — in three years. On Saturday night, the Wildcats got whistled for three in as many possessions down the stretch. The players couldn’t get an open look and Calipari didn’t have a clue. This was the pivotal point in the game that led to the wild celebration in the Badgers locker room. In one corner, his locker devoid of cameras, sophomore forward Vitto Brown was reading his texts and smiling. He had already had a long, happy day, and the one minute he’d played against Kentucky was the very least of it.

All the Grantland coverage of the 2015 NCAA tournament, right here.
Brown’s turn in the spotlight Saturday was a direct result of the mishegoss surrounding the Final Four that was ignited by Mike Pence, the Religious Freedom Restoration Act, and the carnival of fools that kicked off with its passage. The tournament committee found one athlete from each of the four competing teams to sing the national anthem before Saturday’s semifinals. This was done, according to the official announcement in Lucas Oil Stadium, “in the spirit of solidarity and of one community.” Brown and his three fellow singers sang the eyebrows off the thing, Brown in a voice like Smokey Robinson sliding toward Levi Stubbs. (Brown has been singing with his family, in a group called Shades of Brown, in and around Bowling Green, Ohio, almost since he could walk. They have previously assayed the anthem at the Kohl Center before home games.)

“I always tell people that it’s harder to sing in front of me and you, but this is the biggest venue ever, with 70,000 people. That’s crazy,” Brown said. “With the other group members, we were able to tune them out and just sing with each other.”

You can stretch metaphors until they snap and fall to the floor in saccharine splinters, but it’s hard not to see Brown’s words as reflective of Wisconsin’s whole season, what the team was able to do against Kentucky, and what it may be able to do tonight against Duke in the national championship. The Badgers are experts at tuning things out now. They tune out all the extraneous nonsense before the game. They took two haymakers from Michigan State in the Big Ten tournament final and won in overtime. And when it appeared that Kentucky had taken over on Saturday night, with player of the year Frank Kaminsky running on fumes, the Badgers called on junior Sam Dekker, who broke a 60-60 tie with a freeze-dried 3-pointer from the top of the circle, and then took a charge from Kentucky’s Trey Lyles at the other end.

“It is so cool,” said Dekker, who has been busy maximizing his own future earning potential throughout the tournament. “People see us goofing around and joking and having fun, and they think it’s something different, but it’s just the way we are. We’re not trying to be bigger than the event. We’re not too cool for the stage.”

Easter Sunday began sourly for all concerned. In the postgame press conference, Kentucky guard Andrew Harrison got caught on a hot mic reacting to a question about Kaminsky by murmuring, “Man, fuck that n-​-​–​​.”1 By 1:30 a.m., Harrison’s unfortunate slip was national news. By 3 a.m., Harrison — and just about everybody in Kentucky except Mitch McConnell — was tweeting apologies. Harrison called Kaminsky. And, 12 hours later, Kaminsky and the rest of the Badgers had to answer questions about it.

“He reached out to me,” Kaminsky said. “We talked about it. Over it. Nothing needs to be made out of it.”

“He said the wrong thing at the wrong time,” added Wisconsin forward Nigel Hayes. “He didn’t say anything that you don’t hear on the court, when the trash talking’s going on. It was just the wrong time to say it.” 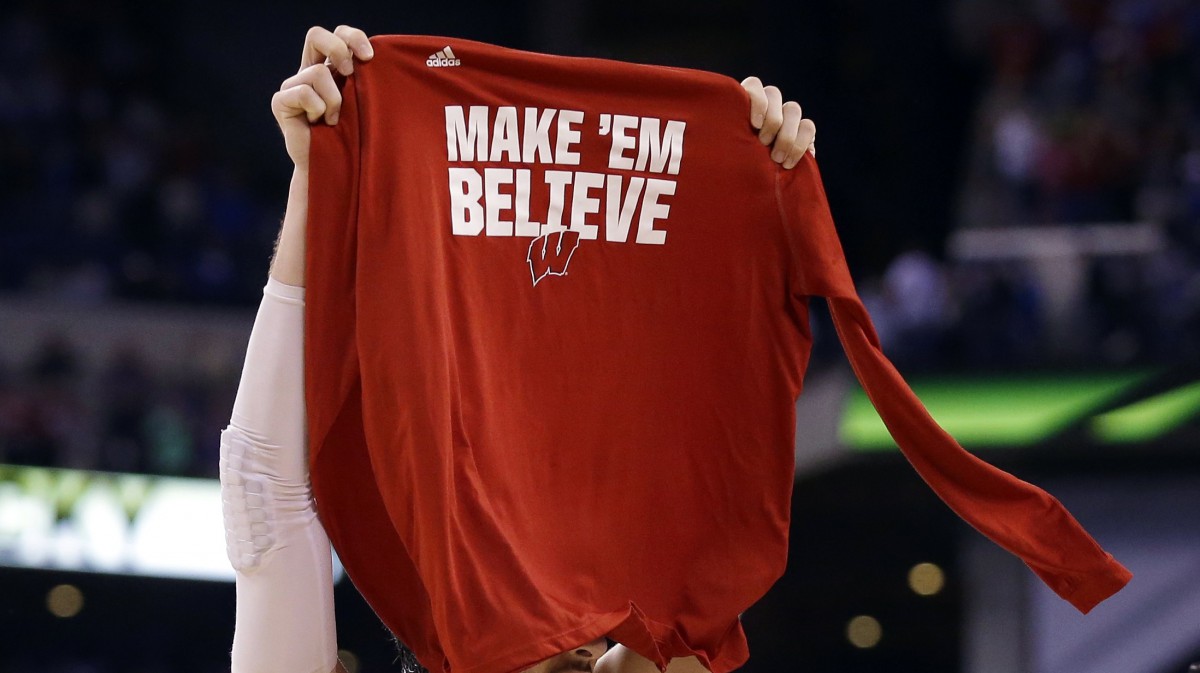 Hayes is central to his team’s elaborate ecosystem. He livened up the early rounds through his fascination with the stenographic process, introducing “cattywampus” into the history of the tournament. (And no, that is not the nickname for the athletic teams at the University of Vermont.) He and Brown are the team’s prime comedians, and Hayes, Brown, and guards Josh Gasser and Bronson Koenig have decided to call themselves the Clutch Brothers, and this has only a little bit to do with making plays at important moments in basketball games. If that were all it took to be a Clutch Brother, Dekker wouldn’t have so much trouble being initiated. “Sam still has some work to do,” Hayes said, “because being a Clutch Brother means playing well, but it means more so in life. Like, if you have hand sanitizer, that’s a Clutch moment.”

Moreover, Hayes has taken on the important responsibility of getting coach Bo Ryan to lighten up, even though Ryan’s reputation as one of the heads you find on Easter Island is completely at odds with who the man actually is. For example, when he wants to teach his team a lesson, Ryan is wont to run a film of the great teams he coached at Wisconsin-Platteville, which he led to four Division III national championships.

“We look at that as a kind of ‘calming down coach’ moment,” Hayes said. “We’re pretty sure that he knows we’re not going to learn anything from the swing offense from 19-whatever. Coach Ryan has mellowed out. I like to take personal credit for that.”

As good as Kaminsky is — and he’s got one of the best arrays of post moves, especially that killer up-and-under, since Kevin McHale was making people look like idiots in the NBA — Dekker has been the revelation. A 6-foot-9 true athlete from Sheboygan, Dekker is one of a number of homegrown talents that Ryan has brought into the program. He’s gotten better almost by the possession since the tournament started. He lit up Arizona for 27 in the regional final, and he had the biggest moments on Saturday night. He may still be pledging the Clutch Brothers, but Dekker has become a genuine citizen of the basketball world. He’s made friends with dozens of opposing players, and he texts regularly with Aaron Rodgers. He’s a tweeting fiend. Good-hearted curiosity — there is a vast number of things that Dekker has found to be “cool” — fairly beams off him.

“It’s fun to be around these guys,” Dekker said. “Some people, you know, on Twitter, they’ll be like, ‘Focus.’ But that’s just us. We know when we have to focus. When we get on the court, we’re all business, which is how it should be. But when we’re doing this stuff, you should just be yourself, and not get too caught up in it. That’s how we all live.”

Dekker, too, was impressed with Brown’s performance Saturday night. “That was cool,” Dekker said. “He didn’t tell us until the day before. I was like, ‘How’s he do that? I’d be so nervous.’ But he’s special in that sense. I asked him if he gets nervous, and he said he doesn’t. If basketball doesn’t work out, I’m sure he’ll be signed by a record label and sing for a while.”

The one-and-done phenomenon, which now is best exemplified here by Jahlil Okafor at Duke, is a permanent fact of life in this game, unless and until everybody gets together and changes the system back to the way it was in the days of none-and-done. But there’s a place for Wisconsin, too, a team that has been together long enough to develop little traditions and internal fraternity and goofy clubs within which you can have fun, a private language, and happy codes. You can learn about all the cool stuff in the very strange world in which you play your games together. This, too, is about the spirit of solidarity and of one community. And there is music and laughter and silliness. And then you tune out all the nonsense and just sing with each other.

‘Jalen and Jacoby’: Paul George, the Hip-Hop Video Bracket, and When Jalen Got Dunked On