Scott Boras, Mike Ilitch, and the I Don’t Give a Crap Deal 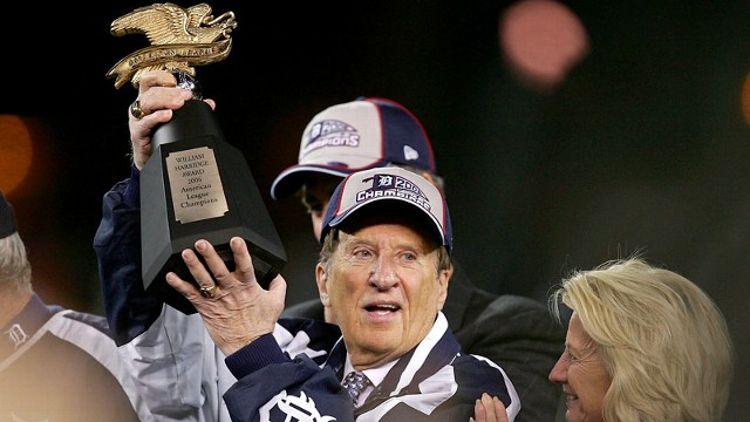 Few baseball executives boast a stronger resume than Dave Dombrowski. He played a central role in developing many of the players on the 1994 Montreal Expos, a loaded team with legitimate World Series aspirations before the strike wiped out the rest of that season. He became the first GM in the history of the Florida Marlins, assembling the team that won it all in 1997 and also the core of the 2003 World Champions. Three years after the Tigers posted one of the worst seasons in baseball history, a Dombrowski-led Detroit team stormed to their first AL pennant in 22 years. He’s connected on the scouting side and well-versed on the statistical side, understands how much players are worth and how to budget for a winning ballclub. In short, Dave Dombrowski knows his stuff.

Which is exactly why Scott Boras wanted no part of him.

Mike Ilitch’s role in the nine-year, $214 million contract the Tigers gave to Prince Fielder has been well documented. Ilitch has his Stanley Cup. He wants a World Series ring, he’s 82 years old, and he was willing to break the bank to make his dream come true. Boras knew this, reached out to Ilitch, and the deal was done.

Owners have had final say on financial matters since the day Abner Doubleday didn’t actually invent baseball. The Yankees are notorious for having a New York faction and a Tampa faction, with the latter stepping in on certain moves. Randy Levine tossed a few extra million at Derek Jeter, because he was once Derek Jeter. Brian Cashman made no secret that he wanted no part of the lucrative, multi-year deal that those above him worked out for Rafael Soriano. George Steinbrenner … yeah, he got involved once or twice. The Cubs’ albatross offer to Alfonso Soriano came from on high too, to name but one recent non-Yankees example.

But Boras and Albert Pujols’ agent Dan Lozano may have hit on a newer, exploitable opportunity: Bypass the GM altogether, or at least come damn close. As skilled and shrewd as Dombrowski is, he’s hardly alone. Gone are the days when ex-jocks going on gut feelings decided how a team would spend tens of millions of dollars. This generation of general managers puts more due diligence into deals — superstar signings, blockbuster trades, or even minor league free agents — than any before. It’s not just a stats thing; GMs of all backgrounds, be they analytically inclined or better-steeped in scouting principles, have a greater understanding of player value and the going rate for wins than did their forebears.

If you’re an agent representing a big-ticket client, do you negotiate with a GM who has 10 baseball ops guys at his disposal breaking down player projections to the smallest decimal point? Or do you approach the octogenarian owner who’s far more likely to make decisions from the heart, far more likely to say, “Eff it, I don’t care what happens in 2018, I want to win now”?

And here’s the thing: The skeptical GM might turn out to be wrong, and the impetuous owner could very well prove to be right.

On Wednesday I banged out a post on the Fielder signing, examining the deal based on advanced projection systems, projected Wins Above Replacement, typical regression rates for players as they age into their 30s, all the stand-bys in a baseball analyst’s playbook. Several Tigers fans disagreed with what I wrote. Aggressively. Who the hell cares if Fielder’s moving around with a walker and hitting a buck-sixty, eight years from now? If the Tigers win it all, it’s a great deal. If they don’t, it’s a bad deal. Point finale.

The point of critiquing a move like the Fielder signing is opportunity cost. The Tigers now have $64 million tied up in three players for the coming season, and another $13 million in a guy who’s already out for the year. What if they need to upgrade the pitching staff at the trade deadline? Or next year? Or three years from now? One man’s desire to win it all notwithstanding, no team has an unlimited budget. At some point, orgiastic spending might come back to haunt you.

It’s so easy to get seduced by the numbers. They’re so clinical, and look so precise. But we’re being presumptuous if we think we can predict exactly what a player is going to do over the next year, let alone the next decade. Doubly so if we overestimate our powers of precision, that a $162 million deal is a bargain, but a $188 million deal is a disaster. There’s always a wide range of possible outcomes in play. Speaking with absolute certainty about what’s going to transpire doesn’t make much sense. And yes, when I say “we,” I mean “me.”

Maybe top players are so good that, as one astute Tweeter noted, you can’t measure them in a typical, linear way. If every single big-ticket contract gets a thumbs-down from WAR projections, but teams keep signing ’em, maybe WAR projections don’t fully capture all the benefits and goals of $214 million for Prince Fielder, or $240 million plus incentives plus a personal services contract for Albert Pujols.

Keith Law covered the concept of moral hazard: Ilitch is 82 years old — who knows what he’ll be doing by the time Fielder’s performance starts to trend sharply downhill? Will Dombrowski still be the GM? Jim Leyland the manager? How many current members of the Tigers extended family will still be in place, beyond the fans who pass through the turnstiles and click on their TVs every night? The way you make and evaluate decisions changes dramatically if the responsibility for their potential failure falls on someone else’s head.

Speaking of those fans, how many of them would give their right eye, not to mention a healthy chunk of their paycheck, to watch a World Series-winning team? We bake budgetary limits into our analysis, figuring a team, and by extension its owner, will stop spending if and when too many big free-agent signings turn into busts. But what if that owner keeps spending, even ups the ante, the way Ilitch and Angels owner Arte Moreno did in reeling in the two biggest prizes of this off-season? How much impact did Pujols’ signing have on the $3 billion the Angels now stand to make from their pending TV deal? How much should we factor in other players’ potential impact on media revenue? Or ticket sales? Or cape money?

Scott Boras has been really good at his job for a long time. Maybe he figures he’s found a weakness by tugging at owner’s heartstrings, rather than arguing wOBAs and FIPs with GMs. As far as his clients’ earning power goes, he probably has. But that doesn’t mean that the Tigers, or any team that exceeds dollar figure projections on a big deal, has automatically messed up. The team that signs the next Prince Fielder might rake in cash from sources it never expected, that we never would have predicted.

Or maybe all that happens is that team gets to host a kick-ass parade one morning in early November. There are worse fates.