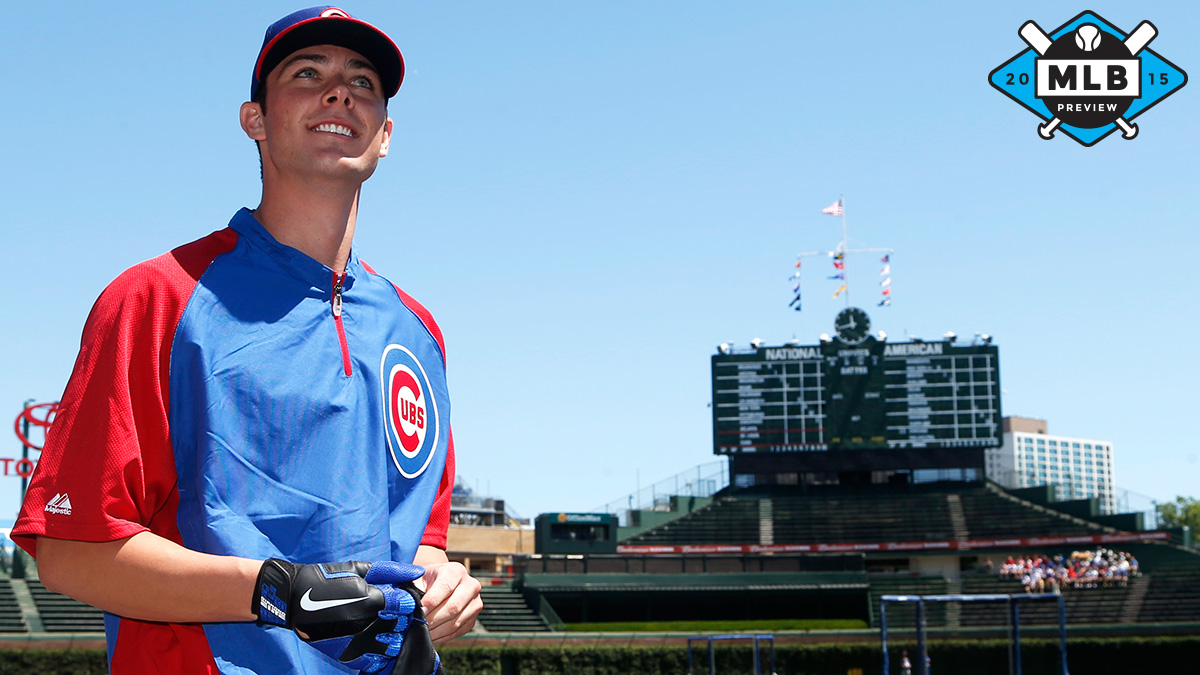 Tony Clark is cheesed off again.

The former All-Star first baseman and current head of the MLBPA has a public style that sets him apart from his peers in other North American sports unions. He isn’t a fire-breathing crusader, like the NBPA’s Michele Roberts, or an intractable stalwart negotiator, like the NHLPA’s Donald Fehr. Every once in a while, Clark will poke his head above ground and witness an owner or front office doing something slimy but not technically against the rules — something major league teams have been doing fairly openly for years, and something that’s common knowledge to players, agents, journalists, and fans alike — and huff and puff to make sure everyone knows he’s aware of the issue and really mad about it. And then he’ll go back to doing whatever it is he does the rest of the time.

Last year, the trigger was teams waiting until midseason to sign Kendrys Morales and Stephen Drew, free agents anchored down by compensatory draft slots. This year, it’s the looming threat of the Cubs holding superprospect Kris Bryant down in the minors for a few weeks to prevent him from accruing service time.

Most of you already understand the concepts of “Kris Bryant” and “service time,” but they’re important enough to repeat.

Bryant, 23, is a minor league third baseman in the Chicago Cubs system, and, simply put, he represents the next step in human evolution. He stands 6-foot-5 and is one of the four or five most handsome men I’ve ever seen, including on television. More importantly, Bryant is very good at baseball. As a junior at the University of San Diego, he hit 31 home runs in 62 games, a preposterous total considering that the NCAA’s use of BBCOR bats and high-seamed baseballs at the time made it easier to put a rocket into orbit than to hit a baseball over a fence. That performance impressed the Cubs enough to make Bryant the second overall pick in the 2013 draft, and since then, he’s traversed six minor league levels, including the Arizona Fall League, in a year and a half. A two-game stint in rookie ball notwithstanding, Bryant has posted an OPS of 1.000 or higher at every level, up to and including Triple-A. In January, ESPN’s Keith Law named Bryant the top prospect in baseball; so did Baseball America and FanGraphs’s Kiley McDaniel.

You know how in certain dystopian sci-fi movies, there’s a group of extremely good-looking, physically active people who live in a utopia, but that utopia is shattered when the hero discovers the horrible foundation upon which it’s built? Kris Bryant is one of those people, and the rest of us are Morlocks.

Service time is less interesting, but more important. When the Cubs call Bryant up, a clock will start running, counting every day he spends on the active roster. This FanGraphs page explains the concept fully, but here’s the short version: There are about 183 calendar days in a major league season; anyone who spends 172 or more of those days on the active roster or major league disabled list is credited with a full year of service time, while players who spend less than that are credited with the fraction of the season they spent in the big leagues. Service time progresses players toward three primary milestones: arbitration eligibility (which takes a little less than three years, depending on moving goalposts that aren’t worth explaining here), free agency (six years), and a pension (10 years).

Which brings us to why Clark is all cheesed off. It’s widely accepted that even if Bryant proves this spring that he’s ready to break camp with the major league club, the Cubs will send him down to Triple-A for a few weeks. That’s because if, at the end of the 2020 season, Bryant has accrued six years of service time, he’ll be able to become a free agent, but if he’s accrued five years and 171 days of service time, he won’t, allowing the Cubs to control him for another year.

Holding back Bryant this April will give the Cubs another prime year from their blue-chipper at the cost of missing his bat for only a few early weeks in a season in which they might not contend anyway. From a business standpoint, it’s a no-brainer.

But it’s problematic for other reasons, and here’s why.

First, there’s the baseball reason: If the Cubs believe that Bryant is one of their best 25 players, they’ll be hurting the club by keeping him out for any reason or any length of time. The fans won’t get to see the best possible product, and the team will harm its own chances of winning, if only in the short term. In most cases, playing games with service time isn’t worth it because rare is the rookie who can break camp with the major league team and avoid getting sent down at any point in the next six years anyway; for a special case like Bryant, though, teams are almost always willing to take the short-term hit in order to delay free agency for a year, and sometimes they’re willing to take an even bigger hit to avoid going to arbitration a year early.

The on-field and aesthetic penalties are minimal, however; Clark’s real concerns are financial and ethical.

What the Cubs are doing — or rather, what they’re accused of contemplating doing — doesn’t violate any rules. They can call up players whenever they’d like. It does, however, represent a violation of the spirit of the rules: Players are supposed to earn service time based on what they do on the field, and teams are supposed to make a good-faith effort to assemble the best roster possible.

Purposefully delaying Bryant’s free agency amounts to transferring wealth from Bryant to his employer. Until Bryant reaches free agency, he won’t be able to earn full market value or be paid in a manner that reflects the true worth of his labor. Bryant was not allowed to be paid in college, and since then, he’s received a fixed rate, depressed at the start by artificial caps on draft bonuses, enacted and enforced by a for-profit enterprise that has a legal monopoly on its industry in this country. He’ll continue to be paid a fixed rate until he reaches arbitration, at which time he’ll be paid, explicitly and by design, a fraction of his market value as a laborer. There is, essentially, one private-sector job in which workers entering the industry do not have the opportunity to choose their employer, and that is being an athlete in a professional team sport. Baseball players don’t get to choose their employers or seek improvements in salary and living situation until they’ve played at least six years in the majors, and that’s a milestone the average big leaguer doesn’t reach. If the Cubs keep Bryant in the minors, it’ll be the result of a multibillion-dollar industry with a legal monopoly enriching its owners at the expense of its young, undercompensated labor force.

If you don’t have much sympathy for Bryant, who earned a $6.7 million signing bonus to play a game, that’s understandable. Most of us will never make that much, and we’re the ones who pay $130 a year for MLB.TV, $100 a month for cable, and $50 for a ticket to watch him play. But it’s important to understand that even if major leaguers made minimum wage, ticket prices and cable subscription fees wouldn’t fall a dime. That’s how capitalism works: You pay the absolute most a company can get you to pay for a product. If the company spends less on labor, it won’t pass the savings on to the consumer.

Believing that professional athletes make too much money is the logical equivalent of preferring for that money to remain in the hands of the owners — who are rich already, whom you don’t know, and who enrich themselves directly off your tax money — rather than in the hands of the players you love watching and whose labor is literally the only thing of value that the owners have to sell. Owners, like an oil company or your cable provider, are the middlemen you have to go through to access the thing you want.1 I don’t know anyone who roots for a cable company.

But that’s why we have labor unions, right? Clark’s belated objection is nothing more than a union boss doing his job. Yet even so, the MLBPA, one of the most successful labor unions in the country, will almost certainly do nothing to end the exploitation of amateurs and minor leaguers, or the stunning underpayment of pre-arbitration players.

That’s because the money in baseball, though it comes in unimaginable quantities, is finite and divisible; and because the MLBPA comprises major league only players; and because its leadership tends to comprise mostly veterans. If the owners are willing to change the rules to open up free-agent expenditures in exchange for a worldwide draft and amateur spending caps, the union will sell out the kids and the amateurs faster than you can say “moral hazard.” Going to war over Bryant would mean spending either literal or social capital that the MLBPA could use to help current union members instead.

Nobody’s breaking the rules, and as a baseball fan and baseball analyst, I don’t object to individuals or teams acting rationally in their own long-term self-interest. Nor do I have an obvious or easy solution to the problem, short of a worldwide revolution, or at the very least having local governments seize ownership of all professional sports franchises and running them like public trusts. (Which I would not be even remotely opposed to, by the way, in case anyone else is feeling particularly Robespierreish today.)

Once again, though, we’re reminded that when we view baseball through a transactional lens, we use “good” and “bad” in such a way that they must be followed by “for ownership.” We don’t have to change that, because, after all, baseball fandom is necessarily team-based. But we have to be aware of it so we can continue to recognize the distinction between a moral good and maximum corporate profit. Too many people can no longer tell the two apart.