Why Haven’t Stephen Drew and Kendrys Morales Signed Yet? And Why Is Tony Clark So Cheesed Off? 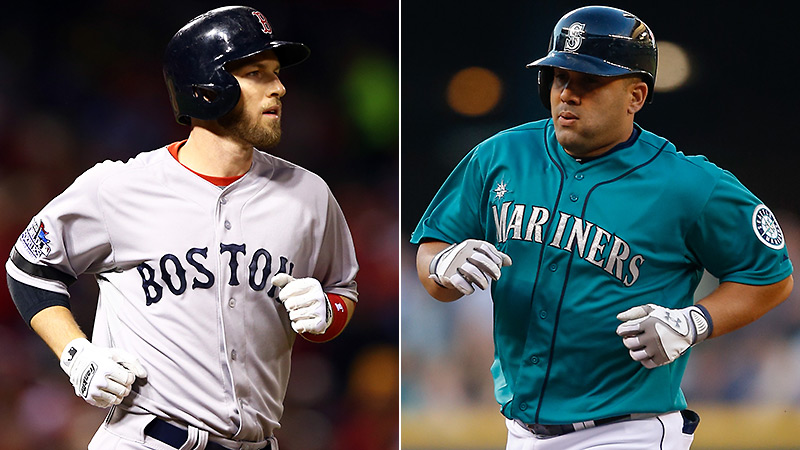 Why is he so cheesed off?

Oh, hello, useful question-asking personality device. It’s good to see you again. Well, last week, Buster Olney talked to a bunch of executives about what Stephen Drew and Kendrys Morales might be worth. Clark, the head of the players’ union, thinks this was tantamount to collusion by setting artificially low market prices for the two top remaining free agents, and wants MLB to investigate.

No, because even if MLB was inclined to investigate the management of its teams (for whom the commissioner’s office works) at the behest of the players’ association (against which it is by definition at odds over money), Bud Selig has no means to compel Olney to talk. NBC’s Craig Calcaterra joked that the commissioner’s office should try the same kind of lawsuit it used to get Tony Bosch to flip over Biogenesis, but good luck trying to sue a business partner (ESPN) with considerable financial might over something this trivial. If I’d written that story and Selig asked me to give up my sources, I’d literally give him the finger.

But Olney’s not going to do that, right?

No, from what I’ve heard, he’s much more polite and tactful than I am. Plus, Selig’s too smart to even ask.

Clark takes a few deep breaths, nobody sues, and we forget about the whole thing by Friday.

Makes sense. Though wait a second … why haven’t Drew and Morales signed anywhere yet?

Nobody’s offered to pay them what they’re worth.

And why not? They’re useful players.

Well, Morales is a 30-year-old first baseman/DH, and if a player is going to be worth a lot of money at those positions, he’s really got to mash. Morales isn’t young enough or good enough to be a building block for a team that’s looking to be good down the road, and just about every club that’s trying to contend this season is pretty well set at first base, except for the Pirates.

Drew’s failure to sign is a little more puzzling. He’s almost as good of a hitter as Morales, but he can actually play shortstop, and guys who can hit and play shortstop are incredibly rare. Drew could also move to second or third base and hit well enough to stick there. The Yankees are fielding a double-play combination of Derek Jeter and Brian Roberts, which would have been the best in baseball in 2007 or so, but New York will be lucky to get 162 games combined out of those two now. The Yankees and about half a dozen other teams could really use a player like Drew.

So what’s the holdup?

Draft picks. I typed out a whole explanation of the new free-agent compensation system, but even the quick and dirty version was 500 words long, so here’s the really short version: Any team that signs Drew or Morales before June’s draft will have to give up a first-round pick. It’s more complicated than that, so if you want to know more, go here or ask me after class. Someday I’ll write a comprehensive guide to comparative draft pick compensation, but that day is not today.

So why is this only a problem for Drew and Morales?

Well, it was a problem for a bunch of guys, like Nelson Cruz, Ubaldo Jimenez, and Ervin Santana. But Cruz and Jimenez signed with the Orioles, who also lost a competitive balance pick when they acquired Bud Norris last season and frankly seem to be punting on this draft, while Santana signed a one-year deal with the Braves at the last minute after a rash of injuries forced Atlanta to acquire an arm. Drew and Morales haven’t found teams desperate enough for their services to justify losing the draft pick.

Think of it this way: Drew thinks he’s worth X dollars. In a vacuum, a team might be willing to give Drew X dollars, but in reality, he’s only worth X dollars minus the cost of the draft pick the team that signs him has to surrender. This is less of an issue for the Robinson Canos of the world, because no one’s going to get into trouble overpaying for a world-class player. But for Drew and Morales, and for guys like Cruz, Jimenez, and Santana, who happened to get lucky at the eleventh hour, the marginal cost of that draft pick is huge.

Let’s say you want to go out for dinner, but your hometown has elected a freedom-hating socialist mayor who decreed that all prepared meals come with a $5 excise tax. This may have already happened in New York City. If you’re going out to a fancy French restaurant because you use money to impress women, and you spend $300 on some food I’ve never heard of because I went to public school, that $5 tax is an afterthought. But if you don’t have a date and you want to go to McDonald’s, you’re probably going to stay home and cook something instead, because the only thing more pathetic than spending $7 on McDonald’s for one is spending $12 on McDonald’s for one.

Been eating a lot of McDonald’s for one lately, have we, Mike?

Bite me. It’s a metaphor.

But eventually you’re going to get to that point when you’re so hungry that you’re willing to spend $12 on McDonald’s for one, aren’t you?

Right. Well, here’s the thing: I’m kind of shocked the Detroit Tigers haven’t signed Drew already. Like the Braves before the Santana signing, the Tigers are a really good team with a glaring hole. They lost Jose Iglesias for the season, and instead of signing Drew, they replaced Iglesias with Alex Gonzalez. Iglesias can’t hit, but as a defender, he’s very slightly sub–Andrelton Simmons, which makes him a league-average player at least. Gonzalez, particularly at age 37, is utter buttcrack as a shortstop. If he qualifies for the batting title, I would give him odds on being the worst player in the American League. Last year, Drew was a three-win player in 124 games. Plug him in for Gonzalez, and he makes Detroit five or six wins better over the course of a season.

The Tigers are the favorites to win the AL Central, but they’re not so good (nor are the Indians or Royals so bad) that they have five or six wins to just screw around with. Add that the Tigers’ team strategy over the past couple of years has been driven by Mike Ilitch’s desire to spend all his money to win a World Series before he dies, and I’m staggered they haven’t signed Drew.

Particularly because they could sign Drew, then trade for a first-round pick if they want one back that badly, right?

Actually, no. Teams can’t trade draft picks in baseball. Not as many people know this as you’d think.

That’s stupid. What happens after the draft? Do they give up a 2015 pick?

No. After the draft, the board gets wiped and any team can sign any player without giving up a pick, but we’ve never gotten that far before. Honestly, that’s what I think will happen: Relieved of the burden of transferring a draft pick, some team that needs Drew or Morales (my money’s on the Tigers and Pirates, respectively) will throw its entire budget surplus at one of those guys, and everyone will go home happy. But until McDonald’s for one only costs $7 again, Drew and Morales might not be going anywhere.