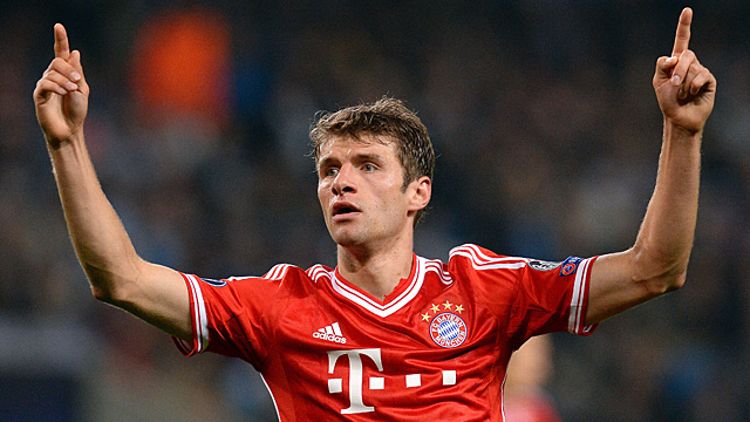 Let’s marvel at the first 75 minutes of football that Bayern Munich put together on Wednesday en route to a dominant 3-1 win over Manchester City by breaking down their three goals. (Apologies for those of you outside of the U.S., for whom I would recommend heading to 101 Great Goals for video highlights.)

This first goal, from Franck Ribery, is not what you would call a textbook example of scoring. There is no textbook chapter about bringing down a cross, creating space 30 yards out from goal and firing a speculative near-post shot. Of the 20 shots that Bayern took in the match, this was both the second-deepest and second-widest.

Ribery’s shot is actually tactical. Ribery is probably the best in the world at beating his man off the dribble moving down the left flank and cutting the ball back to trailing midfield runners. In this match he attempted nine of Bayern’s 26 take-ons, all in that portion of the pitch. This first shot was taken with the express purpose of creating space for Ribery to exploit later. This shot wasn’t even supposed to go in.

Except Joe Hart. To be fair to the struggling goalkeeper, Ribery’s shot is well-placed, powerful, and low. But wow. The body language of City winger Jesus Navas, who was marking Ribery, says it all. Manchester City, coming off a demoralizing defeat to Aston Villa rife with individual errors such as this one, needed to play mistake-free soccer to have a real chance of beating the German champions. Bayern with a lead can suffocate an opponent; after scoring this goal, the Bavarians went on to have 75 percent of the first-half possession. Bayern playing with a lead for 83 minutes? The match became an eventuality. A beautiful eventuality, but an eventuality nonetheless.

Despite Ribery’s excellent form coming into the match, Bayern wound up finding more success attacking City fullback Gael Clichy down the right flank, using both Arjen Robben and Thomas Muller. Robben, as is his wont, was dominant with the ball at his feet, succeeding on 6 of 7 take-ons. Muller used his movement to create space, both in wide areas and behind the defense. This goal is an example of the latter.

Dante, from near midfield, spots the run and delivers a diagonal ball that Muller runs onto perfectly. Clichy breaks off his run, likely assuming that the best-case scenario for him was to be well outside the frame of the shot when Muller rounded Hart and tapped in Bayern’s second. Clichy manages a shrug as if to say, “Why would you do that to me, Thom? While the whole world is watching!” Hart has just woke up from a nightmare only to find that it’s real.

Muller’s run is genius; the angle he takes is perfect, turning nothing into an easy goal. And his touch after Dante delivers the ball is world class. He could have tried to force a shot on the second touch, which Hart may well have saved, but instead navigates around the keeper in limited space and shoots into an empty net. But the space exists because of the dynamism of Bayern’s attacking midfield; Robben and Muller had been switching so often, Clichy is only half-marking Muller when he cuts in from the wing. Their interplay sets up this goal by making it all but impossible for the weakest part of City’s back line to remain tactically disciplined.

The world’s best fullback playing as a central midfielder, Philipp Lahm, is the most advanced player for Bayern on their third goal, pressing City’s Fernandinho and allowing Toni Kroos to come in and make a tackle. Andrew Beasley recently wrote an excellent piece clarifying the difference between tackles won and tackles lost. A lost tackle is, by definition, a tackle that dispossesses the ball carrier yet does not result in a turnover. This means that lost tackles are generally positive pieces of play for the team; they slow down opposition attacks. Whether they are lost or won, especially in the center of the pitch, is frequently the result of randomness. All of that said, Kroos’s tackle on Fernandinho is a tackle won beautifully, and a demonstration of why winning tackles is so valuable.

Before we dive into Robben’s goal, Kroos’s play on the night is worthy of more discussion. The German midfielder was 74-of-76 passing overall, including 23-of-24 in the final third. His passing wasn’t particularly incisive; he attempted only one through ball, but it was positive, with 42 of his 76 pass attempts going forward. Kroos was a constant distributive outlet and defensive presence for his side, combining his passing prowess with six tackles (five won, and the sixth crucial in breaking up City play in their own third). His impact was seen in the quiet and steady dominance that Bayern displayed between their first and second goals; when you don’t make mistakes, when you consistently regain possession, and maintain it in your opponent’s attacking third, you don’t give up dangerous chances. Kroos was the quiet fulcrum of Bayern’s efficiency and arguably the best player on the pitch.

OK, Robben’s goal. What do we know about Robben? Don’t let him go to his left (see: Item 4). If he goes to his left with a clear sight at goal, you’re done. If you make him shoot with his right or pass, well … he isn’t going to pass, and his right foot is not nearly as dangerous, especially when faced with a narrow window. In the above video, Robben has a one-on-one with Matija Nastasic, who does not let him onto his left. Robben naturally does not look to pass to an open Ribery, and instead fires at Hart’s near post with his weaker foot. This is the desired outcome for City except … Joe Hart again.

As bad as Hart’s work was on Bayern’s first goal, this is in many ways much worse. As Colin Trainor points out, when attacked from the right side and defending a shot on target, goalkeepers save a much higher proportion of shots put on their near post as opposed to shots going across the goal. Whether this is due to an inefficiency in standard goalkeeping positioning or in striker behavior doesn’t matter in this case: The shot happens and should be saved about 88 percent of the time by an average professional keeper.

That it is Robben shooting with his weak foot against a national team keeper makes the goal all the more egregious. This ball cannot go in the net. Hart gets a hand to it, but is too weak to turn it around the frame, and in that moment an almost sure Bayern win becomes an even more certain one.

It is interesting that none of these goals came from Bayern’s short passing game. Instead, Bayern seemed to use their interplay to test and tire City both physically and mentally, and to open up space, before creating their chances using more direct action. Whether this was a symptom of City’s tendency to succumb to moments of madness, or will be Bayern’s strategy in big matches going forward will be interesting. What we saw on Wednesday was not Bayern Munich walking the ball into the net after 15 passes strung together, but instead 15 passes strung together, and then a chance created within the ensuing chaos.