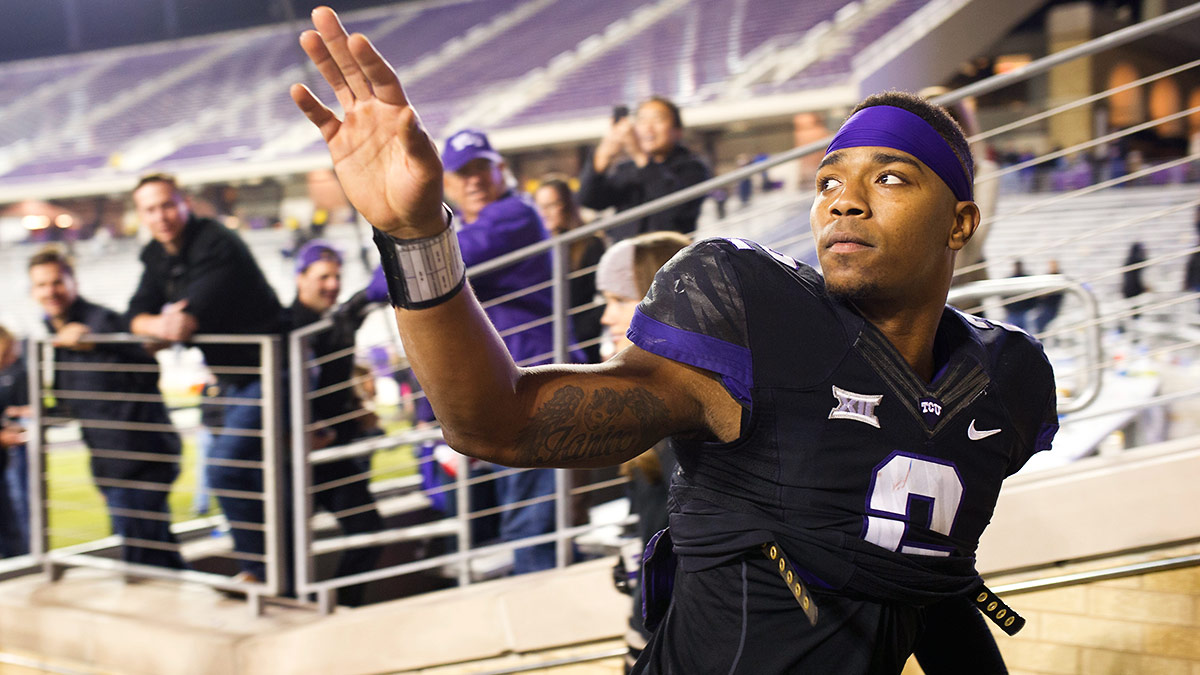 When it comes to the Heisman, greatness can sometimes be a liability. If this sounds boneheaded, consider the case of Cooper, who’s almost too routinely excellent for his own good.

Given the limitations of his quarterback and the fact that Alabama boasts a stable of thirsty running back talent, it’s safe to assume that Cooper’s doing the absolute most that anyone in his position possibly could. And yet, because he’s not a human highlight reel — which, of course, isn’t his intended role, but whatever — he’s relegated to the Heisman race’s metaphorical kids’ table. In terms of sheer excellence and production, he should be a front-runner. Realistically, however, a third- or fourth-place finish is probably Cooper’s ceiling right now. That could change if Bama delivers a death blow to the Dak Prescott campaign on Saturday thanks in part to another big outing from its receiving star.

After a mediocre showing in Morgantown, Boykin appeared to be trending downward, perhaps irretrievably so. One week later, however, Boykin is back to being a likely Heisman finalist. What happened? Boykin conquered Bill Snyder, a known wizard, with a little dark magic of his own.

As we’ve stated before, Boykin’s Heisman hopes are wholly intertwined with TCU’s playoff hopes, so the best news of the weekend may not have even been his ruthless dispatching of Kansas State, but rather the myriad top-10 teams that fell in Week 11. Consequently, the Horned Frogs seem poised to enter the top four in the near future, which should be enough to push Boykin to New York.

All of Grantland’s Heisman Trophy goodness
Gordon-Abdullah Week is finally upon us, and thank heavens, because I for one am tired of pretending one has been appreciably better than the other this season. (Life as a Heisman pundit, I guess.) While the result of a single head-to-head matchup probably isn’t the best way to determine superiority between two running backs, some sort of tiebreaker is needed, and this game will suffice. Otherwise, Gordon and Abdullah run the risk of having their votes split, which is the least desirable outcome for everyone involved.

As for what happened on Saturday: Gordon had an OK day against Purdue, which is to say that he rushed for 205 yards and a touchdown on 25 carries while also managing a receiving score. You know, pretty standard stuff. Meanwhile, Abdullah and the Huskers were on a bye, so hopefully his legs will be fresh to death this weekend after getting some time to recover from an MCL sprain. (Maybe not, though.) Let the elimination game begin.

When does an anomaly become a trend? For Golson, it was sometime during Notre Dame’s 55-31 loss to Arizona State, a lopsided turnover fest that effectively eliminated the Irish from College Football Playoff contention. Though we had previously dismissed his midseason giveaway spree as a bizarre aberration, it’s now time to face reality: Golson, who committed five more turnovers against ASU, is straight-up committed to impersonating Tommy Rees, which doesn’t bode well for his Heisman campaign.

I can only imagine how the Brian Kelly of yore would have reacted to his quarterback’s one-fumble, four-interception outing. New Kelly saved most of his frustrations for the postgame press conference: “Why aren’t they all on Golson?” he cried indignantly after a reporter had the temerity to suggest that the Irish receivers were also to blame for two of the picks. I’ve never heard someone sound more mystified in my life. Let’s all remember to say a prayer for Kelly’s mental health before Golson faces off against Louisville in two weeks, since the Cardinals defense leads the FBS with a whopping 22 interceptions.

Arizona State’s big win is as good a reason as any to check in on the two Sun Devils who were featured here earlier this season. Alas, it is my solemn duty to inform you that both Foster’s and Strong’s campaigns peaked about a month ago.

Despite ASU’s mounting on-field success, Foster was relatively unproductive in the immediate aftermath of his Heisman Watch appearance, and Strong was similarly quiet in the weeks that followed his game-winning grab over USC. While they both enjoyed bounce-back performances against Notre Dame, neither is seen as a legitimate Heisman contender anymore. This leads me to believe that the driving force behind ASU’s sudden improvement is none other than Todd Graham’s magnificent red-and-yellow armband, which would look right at home in a Richard Simmons video. Maybe the armband is really the Sun Devils’ most deserving Heisman candidate? 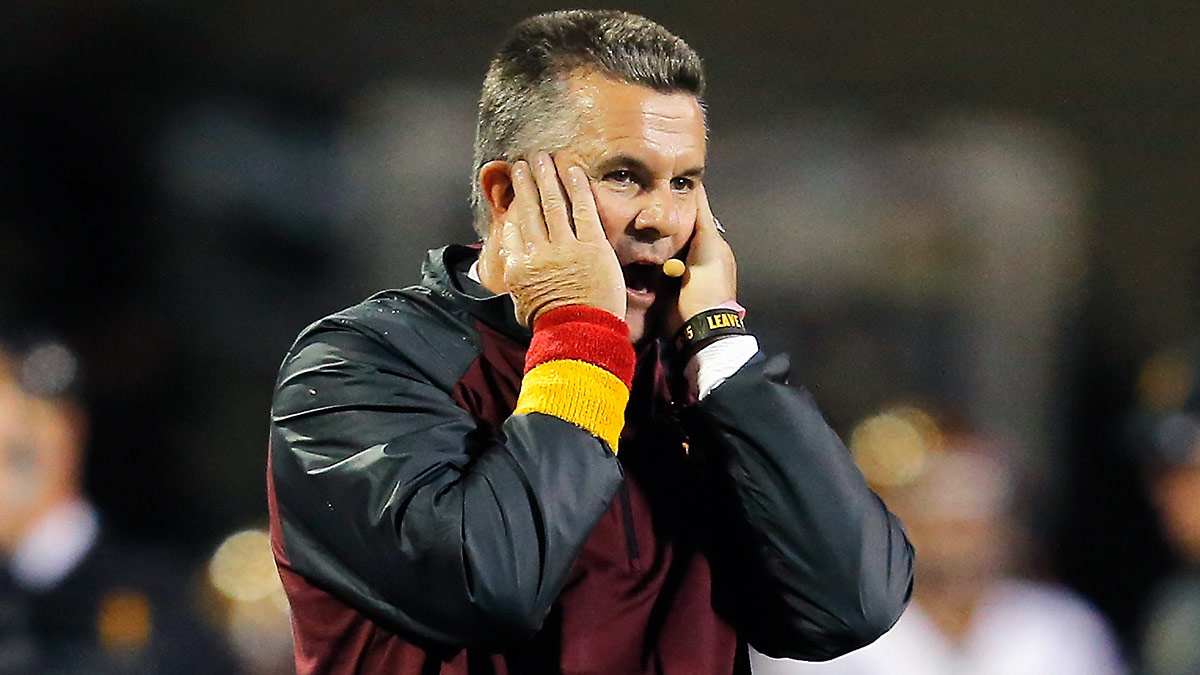 In other news, I’m launching a Kickstarter to persuade Bill Snyder to make the armband a regular part of his game-day wardrobe. Please consider donating to a worthy cause!

Casually pass for 300 yards and three touchdowns on Michigan State’s defense, and the Heisman Watch is legally required to acknowledge your performance, no matter how up-and-down the rest of your season has been. Accrue an additional 86 yards and two scores on the ground, and you get your very own section, plus the satisfaction of causing Pat Narduzzi to lose endless hours of sleep.

Barrett won’t win the Heisman this year, but he’ll certainly garner his fair share of votes, especially if the Buckeyes manage to land a playoff spot. Moreover, he’s positioning himself as an early favorite for 2015 — provided Braxton Miller doesn’t return to the starting lineup, of course. Urban Meyer can proclaim Miller’s QB1 status all he wants, but it’s going to be hard to ignore Barrett if he continues to play prolific, mistake-free football.

Requiem for the Panthers: How Carolina's Playoff Hopes Went Bust