Requiem for the Panthers: How Carolina’s Playoff Hopes Went Bust 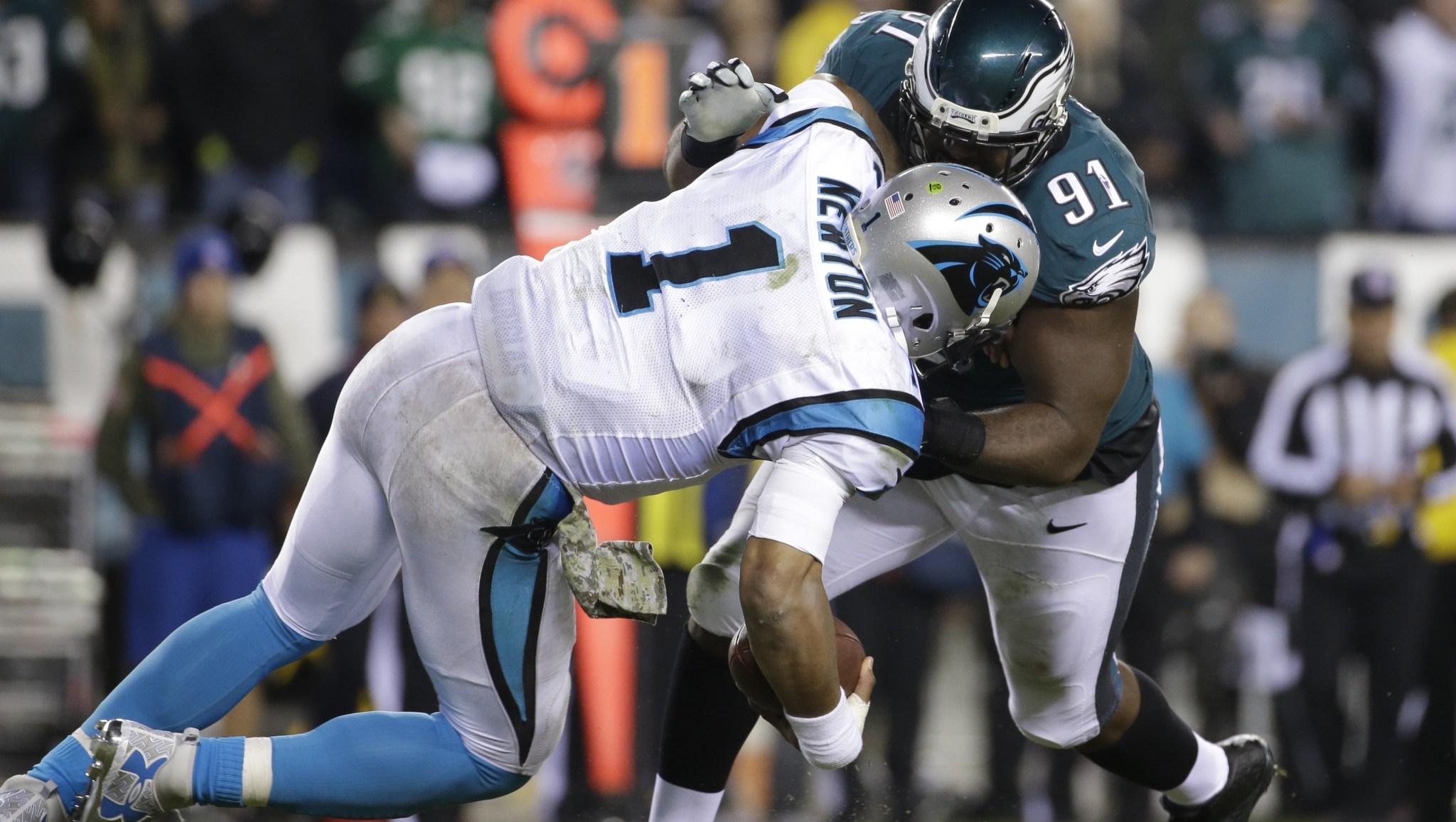 Prime-time football claimed its latest victim on Monday night, as the Panthers were slaughtered by Mark Sanchez and his Philadelphia Eagles, 45-21. Carolina went down 45-7 before adding a couple of late garbage-time touchdown passes from Cam Newton to Kelvin Benjamin (it’s never good when you lose by 24 and the scoreline flatters your team’s actual performance). The loss leaves Carolina in full collapse, winning just one of its last eight games after a 2-0 start. Last year’s 12-4 juggernaut has fallen to 3-6-1, with only the overwhelming mediocrity of the NFC South auguring any hope for a Carolina return to the playoffs.

Last night, the blame for that collapse seemed to be pushed onto the shoulders of Newton, who threw three interceptions and fumbled twice in a hobbled, underwhelming display. Quarterbacks inevitably take the fall for these sorts of problems, and Newton’s play has hardly been beyond reproach over the past few weeks, but it would be foolish to look at Newton like he’s the one dragging the Panthers down. This is a team with major holes up and down the roster, problems it couldn’t have fixed this offseason even if it had tried.

While it’s always tempting to blame a disappointing season on a team’s stars, this is really a failure of Carolina’s relatively anonymous starters, the spots where the Panthers were hoping to simply get by. Last year, Carolina found above-average play in a number of those places from unlikely sources, players who either had a checkered injury history or afterthoughts who stepped up into meaningful roles and played useful football. They parted ways with long-term contributors in the offseason, though, and their replacements have hardly lived up to expectations. Carolina lost 11 players who played at least 500 snaps last season, and here’s who has (roughly) replaced them:

Outside of a couple of asterisked changes,1 these are like-for-like swaps at the same position. In each of the 11 cases, the player the Panthers lost performed better than the player (or rotation) the Panthers have used in his absence.

The only argument you can really make against 11 downgrades in 11 positions would be Benjamin taking over for Smith, but as much as Benjamin has been capable of the spectacular, he also has a season-long case of the drops and still makes the sort of mistakes you might expect from a raw rookie. That showed up last night when Benjamin stopped running on a slant route, leaving Cary Williams with an easy interception.

Even if you call that one a draw, you’re left with 10 downgrades at 10 positions, including a few massive changes that have been felt all season. Hardy, who has missed virtually the entire season while on the commissioner’s exempt list, has seen the Panthers’ pass rush collapse in his absence. Last year, the combination of Hardy and Charles Johnson combined for 26 sacks, with Hardy accounting for 15 on his own. This year, Johnson and Horton have combined for just six sacks in 10 games. Sanchez appeared to have enough time in the pocket to do crossword puzzles or order hoagies from touch screens.

Even if you include Mario Addison, who has been more of a pass-rusher, the three-man trio at end has just 10 sacks in 10 games. And it’s hard to imagine Hardy taking Addison’s lead in the running game. Watch Darren Sproles’s designed counter for an 8-yard score and you’ll see a double whammy from Addison. Not only does he overpursue, creating an easy cutback lane for Sproles, he also gets pancaked by Eagles wideout Riley Cooper. That simply doesn’t happen with Hardy in the game.

The lack of a pass rush has also exposed Carolina’s dismal secondary, a group it had to rebuild on the fly after losing three of last year’s four starters. The Panthers have tried to construct a secondary out of spare parts each of the past three seasons, but after losing Munnerlyn, Mitchell, and Mikell this offseason, they were only left with second-year undrafted free agent Melvin White, who has regressed this year to the point of being benched.

The Panthers struck gold with last year’s group, but that’s hardly been the case this season. Cason has exhibited more of the situational lack of awareness that led to his benching in both San Diego and Arizona. Norman has carved out a role in replacing White, but Harper and DeCoud are still getting lost in coverage. The Panthers were stuck giving rookie fourth-rounder Tre Boston important reps, and it was Boston who got beat in coverage by Luke Willson for the game-winning touchdown by the Seahawks a couple of weeks ago.

Throw in a natural amount of modest decline from reigning defensive player of the year Luke Kuechly and an injured stretch early on from the since-recovered Thomas Davis, and it’s not necessarily a surprise that the Carolina defense has collapsed altogether. Carolina finished third in defensive DVOA in 2013; even before Monday’s blowout loss to the Eagles, Carolina had already fallen to 24th in defensive DVOA, a figure that will likely drop further when the new rankings are released.

The offense deserves some of the blame, too, especially that porous offensive line. The Panthers turned over nearly their entire line this year, giving spots to returning regulars like Silatolu while shuffling the likes of Bell and Chandler. The results are in, and they’re not pretty. You watched Newton get sacked nine times Monday night, only failing to hit double digits by virtue of his own athleticism.

The Panthers averaged just 3.2 yards per carry against a middling Eagles run defense, and you can really see that at the heart of how Carolina’s offense has collapsed. The 2013 Panthers ranked 14th in Adjusted Line Yards, Football Outsiders’s attempt to separate the impact of an offensive line from the work of a nice running back. The 2014 Panthers, as of this weekend’s action, ranked all the way down at 31st.

The natural question you might have at this point is why the Panthers let all of those guys skip town, and the answer is simple: They couldn’t afford to do otherwise. The Panthers were already cap-strapped heading into the 2014 offseason, and that was before Gross retired and Smith was controversially released. Carolina is stuck living out the brutal math of the now-infamous Marty Hurney extensions, and while it re-signed Davis and restructured the contracts of running backs DeAngelo Williams and Jonathan Stewart, there just wasn’t much space to carve out. They weren’t able to sign anything resembling a replacement on the offensive line, had to wish for a miraculous secondary for the second year in a row, and naturally hoped they would be able to keep their stars healthy and productive. It simply hasn’t worked out that way.

I haven’t assigned too much fault to Carolina’s coaching before this week, but in watching one of those actual stars play hurt Monday, I found myself questioning Ron Rivera. Rivera didn’t put much stock in halftime questions suggesting that Newton might be injured, referring ESPN’s crew to the trainers before letting Newton drag himself through four quarters of the loss.

It was painful to see a limited, hurt Newton taking extra hits and forcing throws into tight windows during the second half of a game the Panthers had already lost. Newton has looked way worse ever since he took the team on his back during the tie with the Bengals a few weeks ago. Incorporate the Eagles game and he looks like a totally different passer:

The only good news for the Panthers, I suppose, is that the worst is probably over. This was the last brutal opponent remaining on their somewhat ridiculous first-half schedule, which will immediately cease to be challenging. They get Atlanta next week, and then go on a bye before facing the Vikings, Saints, Buccaneers, Browns, and Falcons during the run-in to the end of the campaign. Carolina’s record might be about to improve, even if it plays at the same previous disappointing level. Barring some sort of NFC South miracle, though, its 2014 run will not include a return to the playoffs.

The Hall of Fame Candidacy of Daniel Alfredsson